Thebe Magugu On Community, Conspiracies And Creativity During Covid

With its focus on community, family and celebrating local talent, Thebe Magugu’s latest womenswear collection feels eerily prescient in the current climate. Filled with eclectic yet timeless, effortless pieces, the 27-year-old who in 2019 won the LVMH Prize for Young Designers (marking the first time a designer from Africa has won the prestigious accolade) says the collection is inherently a reflection of his heritage – a theme that continues to influence him greatly. “I think the times we have been thrown into allow one to be quite reflective, and for me that meant going back to the basics of what I do and where that inspiration comes from. I found that it is any idea of home,” he says. “South Africa is an incredibly beautiful place but has extremely high tensions as well, which stand in contrast with that beauty, which almost makes it quite a paradoxical place. I like to think these opposite tensions are represented in my work, which is from a place that is all at once peaceful and chaotic, beautiful and morbid, hyper-traditional and super-modern.” 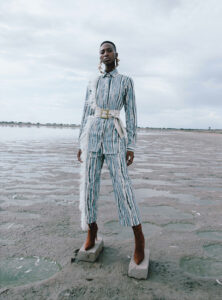 In September Magugu launched his e-commerce site. Inspired by classic university .edu sites and featuring personal essays, short films and editorial-style photography, he describes the experiential and, at times, intimate platform as a “digitised vision of my brain”. “I wanted one to be able to gain something and feel emotions when scrolling through the photography, the writing, the films, the clothes and their story,” he explains. “Feeling, which has been robbed from fashion since the onset of Covid-19, was an important keyword we started with when creating the site.” It also hints at the hands-on creator’s business savvy. “Covid-19 has upended everything we know,” he suggests. “Fashion had long thrived on constant newness, which led to access, but now I have had to reconsider what fashion is in an emergency. I can recognise that clothes now more than ever must be incredibly conscious of their wearer, and I find myself having a lot more ease in my collections, which allow its wearers to exist at home, in the office, on an outing. I am thinking about multifaceted clothing. In terms of business, I find myself going online even more, whether it’s the launch of my e-commerce or through the new way of showcasing fashion.” 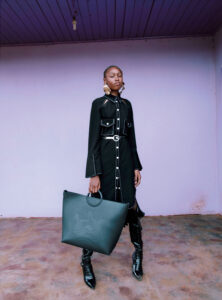 His SS21 collection, ‘Counter Intelligence’, which was conceived during lockdown, further juxtaposes the idea of surveillance and the secret self. After reading Jonathan Ancer’s book Betrayal: The Secret Lives of Apartheid Spies, Thebe Magugu started thinking about conspiracies closer to home, and contacted female spies who either worked for the Apartheid government or defected to the other side, essentially becoming double agents in the process. “I was lucky enough to have them actively participate in the creation of the collection,” he reveals. “Mrs. Olivia Forsyth, a confessed spy, sent me a document with her scanned fingerprints, which became a headlining print on a dress. One spy who wants to remain anonymous, sent me a portrait of herself, which now sits as a print on one of the collection’s shirt dresses.” “It’s been an honour working with these women and it has opened my eyes to the multifaceted psychology people have,” he adds.

Thebe Magugu’s AW20 collection has been selected by Matchesfashion as part of its The Innovators Programme, a one-year commitment devised during the global pandemic to champion emerging talent by offering mentorship, preferential business terms and marketing support. Visit matchesfashion.com or thebemagugu.com.