Coloured gems are back in style and, of all of them, the blues reigned in 2015. Diamonds may be forever but the shades of the ocean are certainly for now. 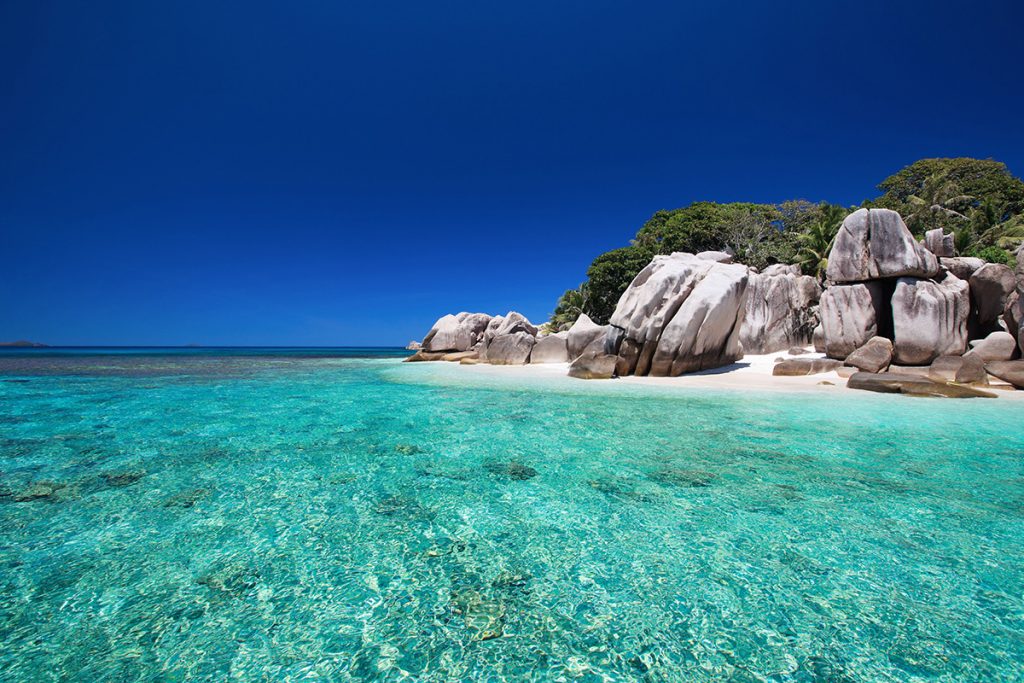 Turquoise, azure, aqua, royal, icy, ocean; call it what you will, blues have without question set the tone for 2015. By the time Cate Blanchett had appeared at the 86th Oscars wearing a fizz of Tiffany turquoise, aquamarines and diamonds and Bianca Suarez had turned heads with her turquoise Chopard drop earrings set with green tsavorites and beads of berry rubellite, the course was set. “We have witnessed a resurgence of coloured gemstones in jewellery collections over the past few years, including the ‘big three’ emeralds, rubies and sapphires, but also more unusual and rare gemstones [such as] Paraiba and Indigo tourmalines or lapislazuli,” says Natalia Shugaeva, the Head of Design at Fabergé. Why the sudden popularity? “These gemstones are popular with clients looking for a rare, unusual coloured gemstone to reflect their personality,” Shugaeva explains. “Clients are now more aware of the wide range of choices available and are looking beyond the obvious. More than a trend, I feel it is a revival and that the love for blue gems is here to stay.” Another reason is the rise of the more ethically discerning jewellery buyer who, in the hunt for more morally mined stones, has looked beyond diamonds, enlarging the scope of stones. Looking beyond traditional sapphires, both high and fine jewellery collections now embrace blue in a riot of aquamarines, lapis lazuli, tanzanites chalcedony, tourmalines and turquoise.

“Following a few decades of domination by the clear stone, the coloured gemstone revolution is most definitely back”, says Ian Harbottle, CEO of Gemfields, the world’s largest producer of ethically stones. It is in part driven by growing wealth in emerging economies – India and China – but bold accessories are in vogue and with a sense of fashion freedom running high, people have become more daring with their jewellery purchases, especially when contrasted with the relatively conservative tastes of the 1980s and ’90s.

Carlo Palmiero, the founder of family owned firm Palmiero, believes there are also more esoteric reasons for the rise of blues: “In these chaotic times, we are tormented by negative news and events. Blue releases harmony and serenity, it is the colour of the sky. As it symbolises nature, blue releases new peace and gives us the chance to cut ourselves a moment from everyday hectic life in order to rediscover the beauty around us.”

Stones formerly overlooked or designated as semi-precious (as if it to diminish them) such as turquoise, tanzanite, Paraiba tourmalines – a particular sensation – lapis lazuli, opals, chalcedony, aquamarine, topaz and iolite are having their moment in the limelight. Some have even overtaken the classic big three in terms of price-per-carat value. Rich, deep and vibrant hues of blue have formed a vein through haute joaillerie in 2015.

And these blues have brought with them a sense of boldness and playful creativity. Different tones, textures and translucencies are layered and juxtaposed. “These stones offer so many colour variations,” says Raffaella Rossiello, International Communication Director of Chopard; “it gives us the ability, for example in the Animal World Collection, to reproduce the colours of the feathers or the skin of different animals. The best example is our peacock earrings, presented in Paris during the Couture week, in which we used different stones and diamonds to express the beauty of this animal.” Daring creativity has ushered in audacious designs: on Chopard’s Scintillating Fish Necklace, gem-set fish appear to swim in a cascade of coral and waves. On a statement ring in the de Grisogono collection, a plump amethyst is surrounded by bubbles of turquoise beads. 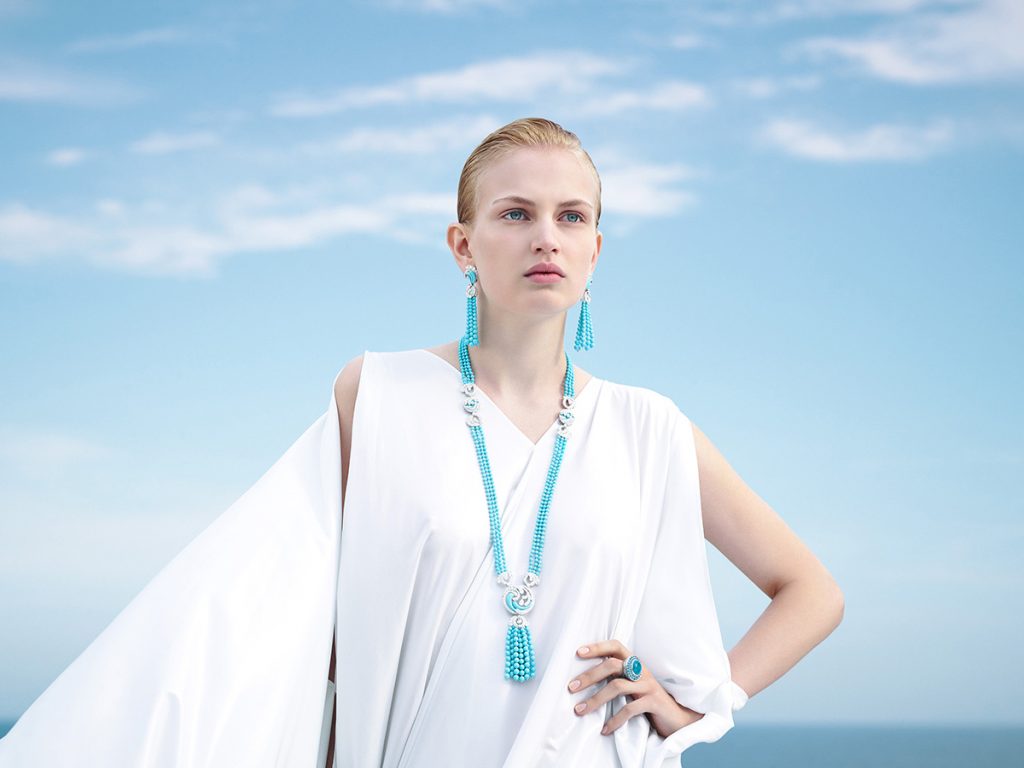 Accordingly, several of the new collections have marine themed names and pieces, such as Tiffany’s ‘The Art of the Sea’, created under the artistic direction of Francesca Amfitheatrof. Highlights include sapphires set like fish scales, droplet blue tourmaline necklaces and rings set with enormous tanzanites. Van Cleef & Arpels named its 2015 High Jewellery collection ‘Seven Seas’, with the Reflets Adriatiques featuring drops of tourmalines, emeralds and diamonds hanging from a ribbon of sapphires.

“To me, blue is a very strong and evocative colour. It reminds me of nature, the sky and the sea,” says Fawaz Gruosi, Founder and Creative Director of de Grisogono. “I am in love with the unique colour of the sea of the Sardinian coast, where I spend my summers. Beautiful shades of very light and deep blues have inspired some of my latest creations. This year De Grisogono presented two stunning blue-toned additions to its Grappoli high jewellery watch collection: one piece is set with brilliant-cut dark blue sapphires and briolette-cut tanzanites and the other is set with precious apatites and Paraiba tourmalines. “The rich hues of intense blue and vivid turquoise combined with glistening white diamonds remind me of the scintillating reflection of the Sardinian sun as the waves gently roll in,” says Gruosi.

Turquoise – whose name derives from the French for ‘Turkish stone’, on account of its passage through the souks of Istanbul on its way to Europe – is certainly the stone of the moment. “[It’s] making a serious comeback in both high and fine jewellery,” says Shugaeva, who paired turquoises with enamel of the same hue and other coloured stones in Fabergé’s Summer in Provence collection. In Piaget’s Secrets & Lights high jewellery collection turquoise is a running theme, inspired by the Silk Road traders who wended their way across the continent, through Samarkand to Venice. A gold cuff edged with unevenly shaped turquoise beads and diamond-set leaves is both dramatic and elegant; a looping bracelet in yellow gold is set with teardrops of sky blue stone.

Turquoise vies for predominance with Paraiba tourmalines, the name of that stone alone creating a buzz at its mention: it was discovered only two decades ago and the Paraiba mine in Brazil, after which it is named, is already almost exhausted. As a result, Paraiba tourmalines now sell for similar prices per carat to the highest quality diamonds and the hunt is on for new sources of similarly bright tourmalines. Chopard’s show-stopper at Baselworld, was a ring with a vibrant, 41-carat Paraiba tourmaline in Titanic blue at its centre, surrounded by diamonds set in a lattice of white gold. Arunashi’s impressive cuff too has an electric 23-carat stone at its

centre, surrounded by diamonds and opals set into titanium, while Boghassian has artfully combined both turquoise and tourmaline in a spectacular flower-shaped ring with hand-carved turquoise petals around a Paraiba tourmaline that has been inlaid with an oval diamond.

Designers are excited by the new colour trend: “As a designer, this allows me to explore more possibilities in the realm of high jewellery, which are led by an artistic point of view rather than a commercial point of view,” enthuses Shugaeva, Palmiero adding that colourtonalities allow for endless creative freedom.

“High jewellery has changed; it no longer is a jewel composed of a single stone, in which the mount is secondary,” adds Carlo Traglio, President and CEO of Vhernier. “We are moving more and more towards jewels made of different stones mounted together, of different colours. Forms change; they’re now more important, different, and excitingly innovative than ever.” Traglio insists that his company’s creativity is not led by trends – and in this he is not alone. “I am not interested in following trends,” says Gruosi; “to me creating should be a pure expression of passion”. What’s different, says Traglio, is the customer: “This creative freedom is not new to us. What has changed is the openness of a wider number of customers who are keen to buy jewellery with a ‘different’ spirit, definitely more creative than ever before.”

A broadened range of stones has given designers and craftsmen more free rein, which has enhanced creativity. This season’s cascade of blues has been a vibrant display of shifting tastes, and discerning women are the richer for it. Any colour, so long as it’s blue. 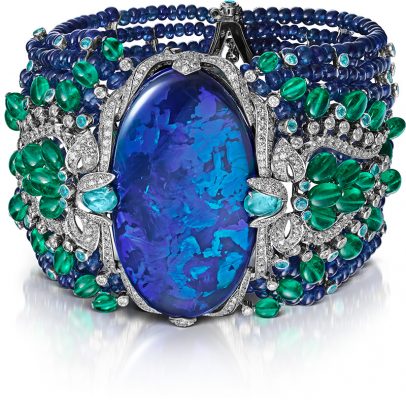 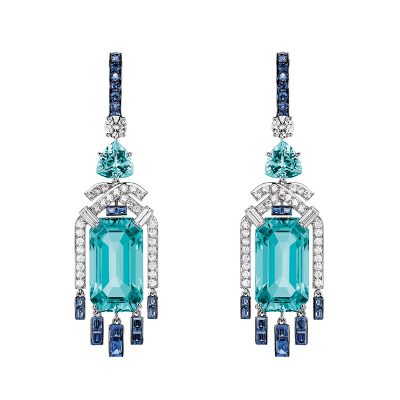 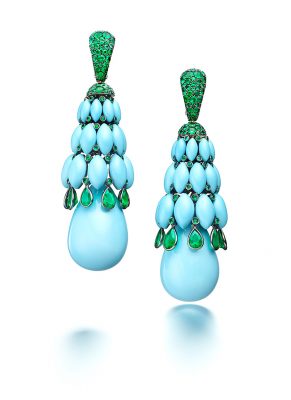 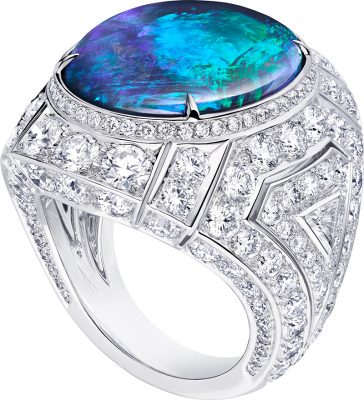 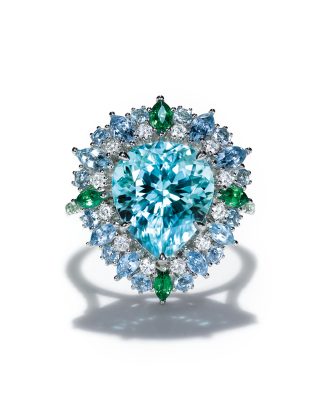 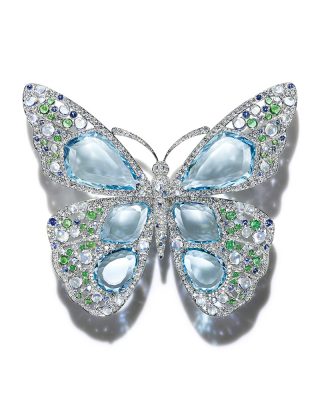