Gems That Made History

As auction sales continue to break records, we look at a dozen of the most breathtaking jewels and gemstones ever sold – often as remarkable for their history as for their quality. 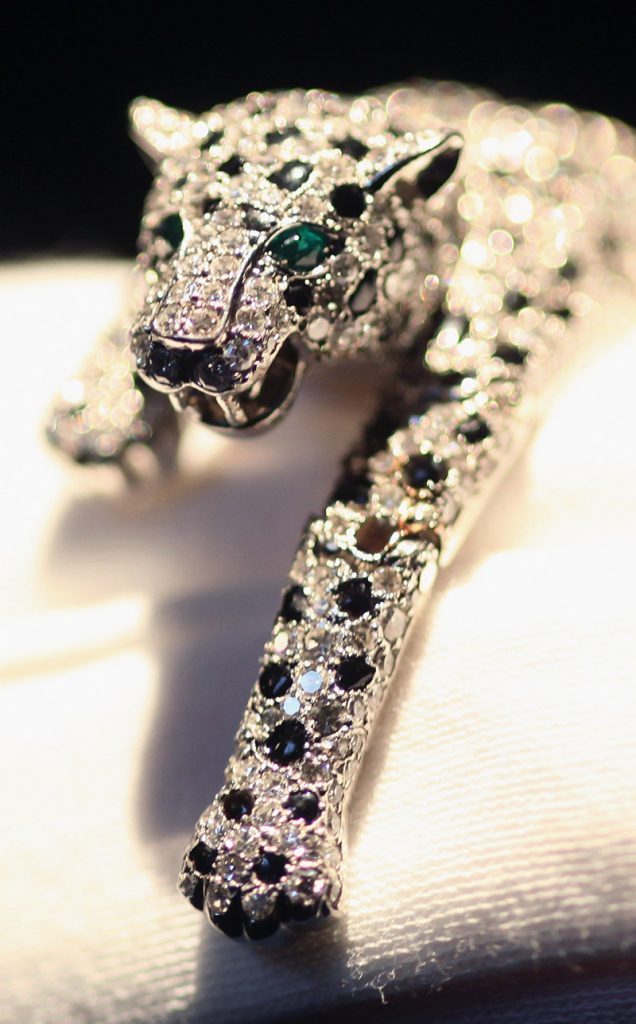 We cannot talk about precious jewels without acknowledging the power of romance. This onyx and diamond panther bracelet, made by Cartier Paris in 1952, was commissioned and owned by American socialite Wallis Simpson, The Duchess of Windsor. Few women in history compare with Simpson’s hold on the romantic imagination of her age. Born Wallis Warfield in 1896, the divorcee’s scandalous relationship with British monarch Edward VIII caused the king to abdicate his throne – ‘for love’ – in 1936, whereupon the couple lived in European exile as the Duke and Duchess of Windsor.

Among the Duchess’ most prized processions was this glorious bracelet, which fetched three times its estimated price at Sotheby’s in 2010, even though it was in imperfect condition (several small stones are missing). Although the buyer remains anonymous, rumours persist that Madonna, who directed a woeful movie about the Simpson-Windsor affair, bought the coveted item for US$12.417m. The bracelet remains a 20th century jewellery icon. However, the question remains: is it worth more than US$12m when other Cartier panther models of similar vintage are also in circulation? Probably not – and this is where romance enters the frame: its former owner’s story gives the bracelet an intangible, totemic power. 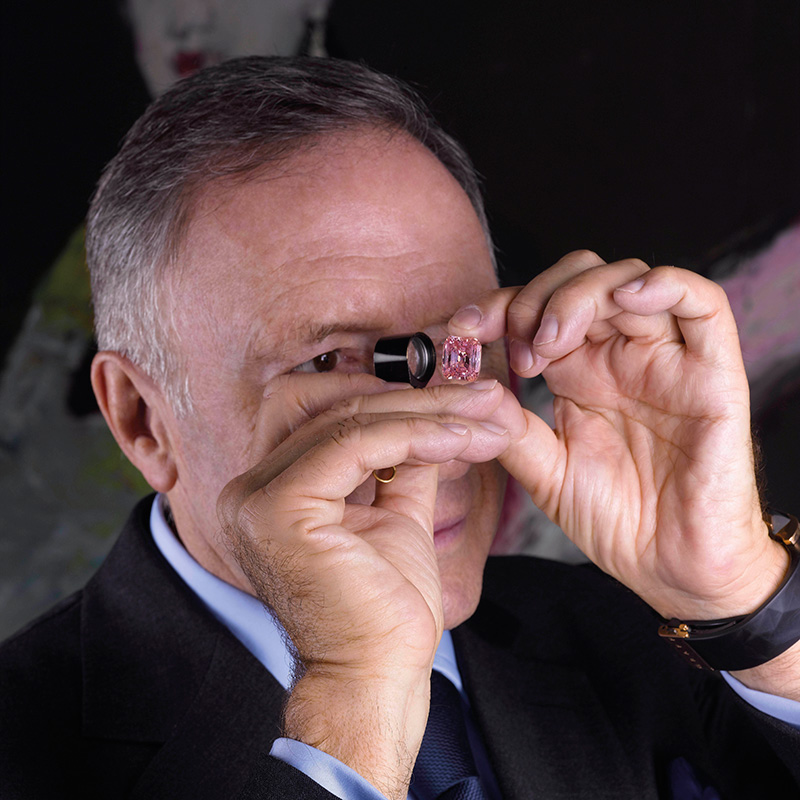 We have to list two pink diamonds, given the stones’ rarity and incredible market powers. Many connoisseurs prefer to credit the Graff Pink as the most expensive, and most beautiful, pink stone in the world since it won the crown at Sotheby’s Geneva auction house in 2010. Its main competitor: The Historic Pink. Weighing 24.78 carat, an extremely rare size for any pink diamond, the Graff Pink (named by the eponymous jeweller after he bought it) is classified by the GIA as ‘fancy intense pink’, a description limited to the top two percent of the world’s diamonds.

This sensational stone’s early history is unclear. We know that it was once owned by American jeweller Harry Winston, who claimed it to be ‘one of the greatest diamonds ever discovered’. It then passed to a private collector and fell into obscurity. Then, in 2010, it broke all records at Sotheby’s, when Laurence Graff bought the stone for US$46.2m. To this day, it remains one of the most expensive single jewels ever sold. 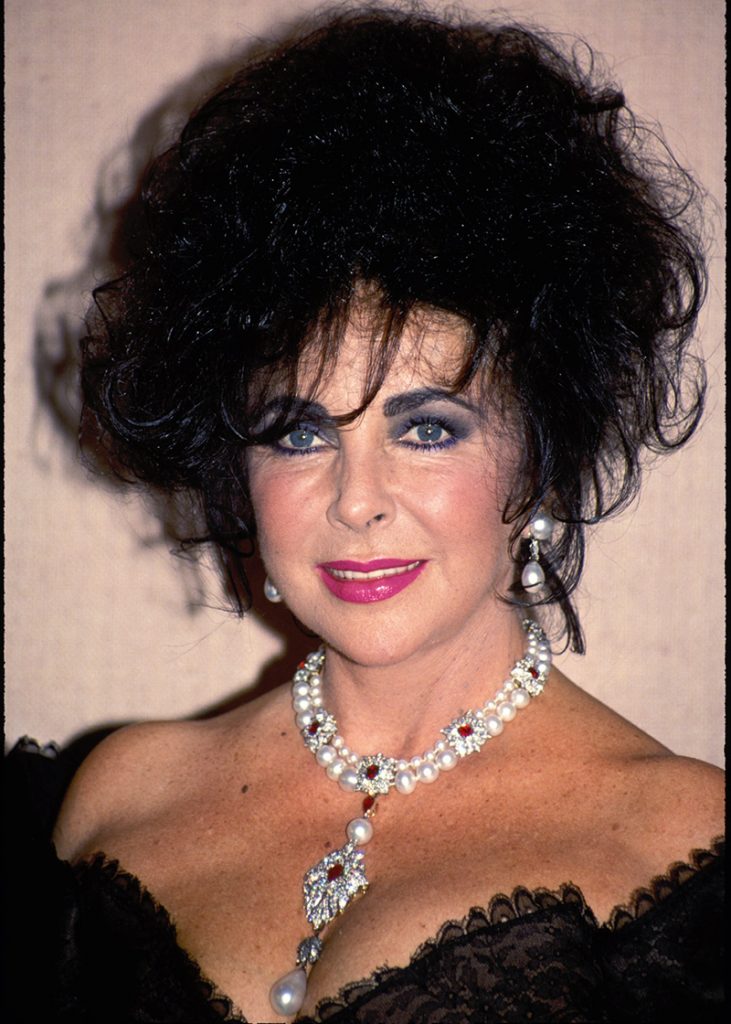 Once the world’s most famous woman by some margin, the English-born actress Elizabeth Taylor lived a life of intense drama. She held enormous sway over men (marrying eight times; twice to Richard Burton) and her everlasting glamour and beauty, as well as her prodigious love of jewellery, gave her an immortal appeal. When her astonishing collection came up for auction in 2011, it shattered sales records.

The headline lot was a large 16th-century natural pearl named ‘La Peregrina’ (meaning ‘pilgrim’ or ‘wanderer’ in Spanish) mounted on a Cartier necklace. One of the world’s most famous pearls, its history dates back some 500 years: acccording to lore, an African slave found it near the Isle of Santa Margarita in the Gulf of Panama in the mid-16th century and gave it to the administrator of the Spanish colony, whereupon he was rewarded with his freedom. It was later given to Queen Mary I of England, daughter of Henry VIII and Catherine of Aragon. After her death, La Peregrina stayed among European kings and queens for several centuries, until it was sold to James Hamilton, Marquess and later Duke of Abercorn in Scotland. When it turned up at Sotheby’s London in the 1960s, Taylor’s then-husband Richard Burton purchased it for $37,000 as a gift to his bride. Today it belongs to a private collector in Asia. 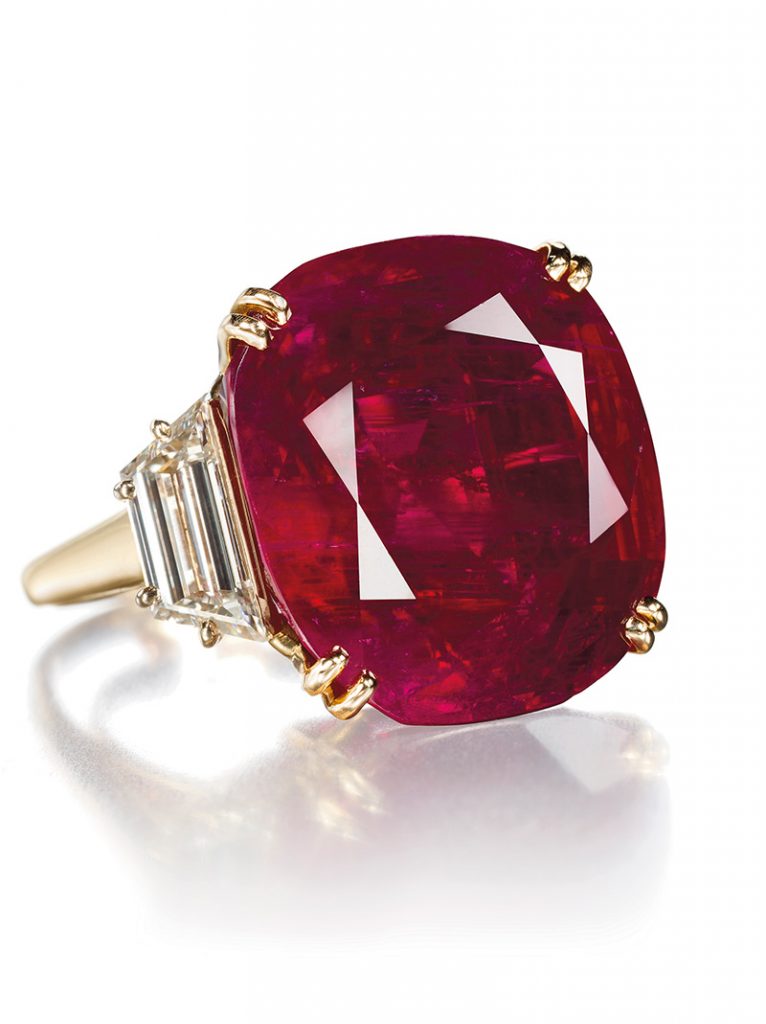 In the middle of last century Count and Countess Guy du Boisrouvray (she was born Luz Mila Patiño) amassed a breathtaking collection of jewels, which were inherited by their daughter, the Countess Albina Boisrouvray. Countess Albina sold the entire collection in 1989 to fund a charitable foundation established in memory of her son, François-Xavier Bagnoud, who was killed in a helicopter crash. The jewels sold for $31.2 million, an auction record at the time for any single-owner sale of jewellery in the United States.

The star lot of the sale was a 32.08-carat Burmese Mogok ruby and diamond ring by Chaumet, which was bought by Lily Safra, the wife of banker Edmond Safra, for $4.62 million – a world auction record for any coloured stone at the time.

The ring – with its central stone renamed the Hope Ruby – was sold again in 2012 as part of the Christie’s Geneva sale ‘Jewels for Hope: The Collection of Mrs. Lily Safra’. It sold for $6,736,750 (well above its high estimate of $5m), an increase in value of more than 50 percent in two decades.

With all the proceeds from the sale donated by Mrs Safra to support 32 charitable institutions, the 70-lot auction of jewels achieved more than 35 million Swiss Francs, a world record total for a jewellery charity auction. The price of the Hope ruby has since been eclipsed but no other stone has contributed so much to philanthropic causes as this one. 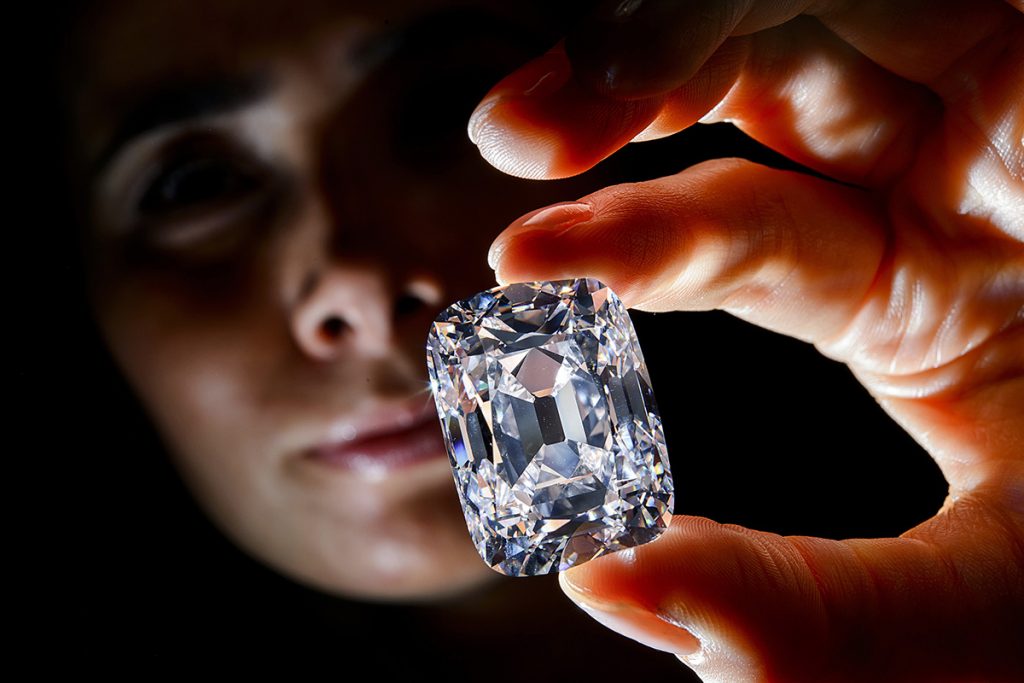 Originating in the Golconda mines and named after its first recorded owner (although nobody knows how it came into he Archduke’s possession), this colourless, internally flawless cushion-shaped diamond originally weighed 78.54 carats. The Archduke – born a Hapsburg, he was a military officer who was briefly Hungary’s head of state in 1918 and 1919 – is recorded as having deposited the stone in a bank vault in 1933. It was sold to an anonymous buyer in 1936 and kept in a safe-deposit box in France, never to be seen again until 1961, when it appeared at auction in London – but was unsold.

It resurfaced again at Christie’s Geneva in 1993, where it was bought for $6.5m by an American jeweller, Alfred Molina, who had it recut to 76.02 carats to improve its clarity and symmetry, Molina resold the stone at Christie’s Geneva in November 2012, where an anonymous bidder paid more than 20m Swiss Francs ($21.48m), far exceeding its pre-sale estimate of $15m. This set a world record for a Golconda diamond and a world record price per carat for a colourless diamond.

More gems that made history are covered in our J&W Edition out now.