For its latest high jewellery collection, Chanel reimagines the iconic N°5 fragrance in more ways than one. MOJEH speaks to Patrice Leguéreau, director of the Chanel jewellery creation studio about Collection N°5

Each year sees the launch of one, if not two, high-jewellery collections from Chanel, which typically pay tribute to the French Maison’s past. Most recently was Le Paris Russe De Chanel, which salutes Gabrielle Chanel’s affection for a 1920s ‘Russian Paris’ heyday – “The Russians fascinated me”, the designer famously once said – there’s also Tweed De Chanel, which superbly honours the Maison’s devotion to the Scottish woollen fabric through a series of 45 pieces intertwining a mix of diamonds, pearls, sapphires, and more. Then there’s Escale à Venise, which reminisces about 1920s Venice, where Gabrielle Chanel sought solace after the death of her love, Arthur ‘Boy’ Capel. But this year is the first that the House – or any House, for that matter – has launched a full collection inspired by a fragrance. 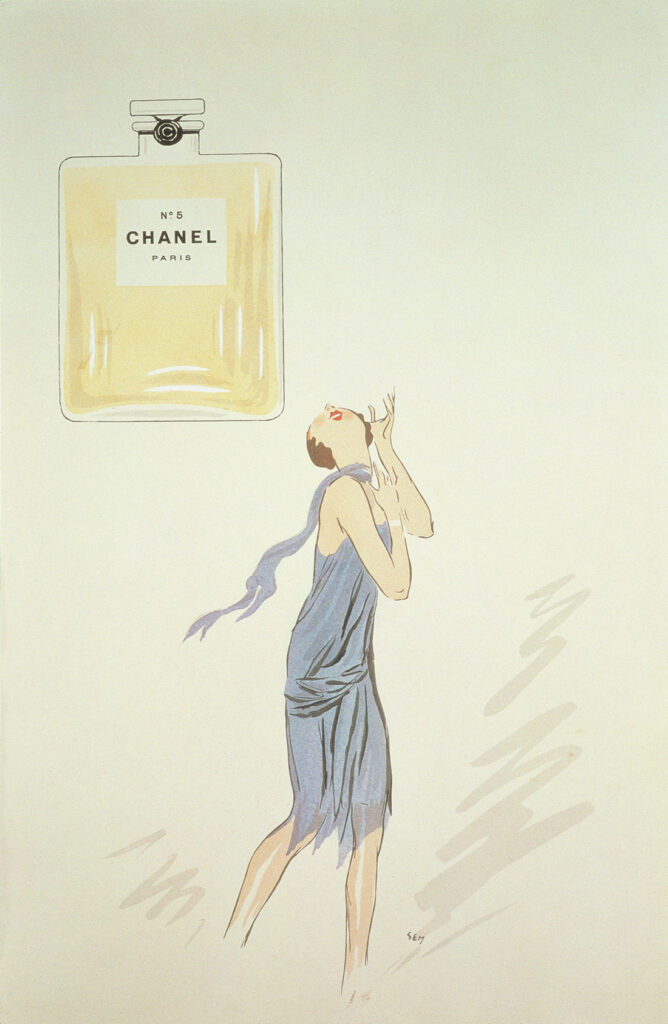 “I wanted to rediscover that creative gesture with this collection, which has been conceived like a journey through the meanderings of the N°5 perfume’s soul, from the architecture of the bottle to the olfactive explosion of the fragrance.” Patrice Leguéreau

Imagine this: 123 high-jewellery pieces offering audacious combinations including white diamonds, rubies, sapphires and garnets in explosive designs that express everything from the fragrance bottle to its floral notes. There’s only one scent storied and influential enough to inspire such a wealth of design: Chanel N°5. “It’s a very special moment because it’s a brand new collection and it’s a scene that’s very new for Chanel jewellery and the jewellery world in general,” Patrice Leguéreau, director of the Chanel jewellery creation studio tells MOJEH from his atelier in Paris. The launch moment, 2021, was chosen as it marks the fragrance’s centennial year. Originally composed by Ernest Beaux and Gabrielle Chanel in 1921, N°5 was announced as the first “perfume for women with the scent of a woman” and went on to revolutionise the fragrance market, with the help of Hollywood icons – Marilyn Monroe famously claimed that she wore “five drops of Chanel No5” and nothing else in bed – and a series of seductive campaigns most recently featuring Nicole Kidman, Gisele Bündchen and Marion Cotillard. 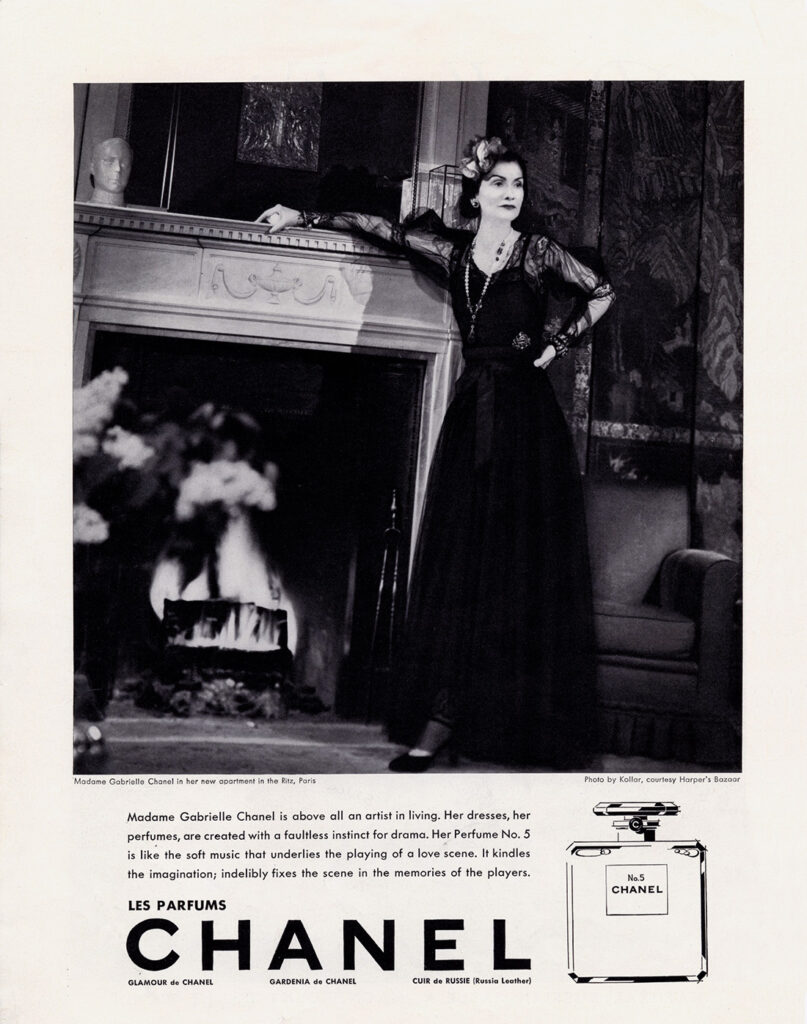 Not content with rewriting the codes of fragrance, 11 years later, in 1932, Gabrielle Chanel once again shattered traditions by introducing a high-jewellery collection using only platinum and diamonds. Named ‘Bijoux de Diamants’, the pieces introduced new ways for women to wear and enjoy jewellery, shunning the notion that diamonds were worn to showcase status rather than for a woman’s enjoyment. “Gabrielle Chanel approached these two universes with the same visionary values, focusing on audacity and the quest for excellence,” explains Leguéreau. “I wanted to rediscover that creative gesture with this collection, which has been conceived like a journey through the meanderings of the N°5 perfume’s soul, from the architecture of the bottle to the olfactive explosion of the fragrance.” Leguéreau explores N°5 through five different narratives: the stopper; the bottle; the number itself; the flowers; and the sillage, otherwise known as the ‘trail of scent’. “This structure helped me to organise the drawings,” he explains. “It was a challenge at the beginning to start from the perfume. It’s not only a liquid; it’s a universe with a very strong design. A perfume is so much – there’s the design, the labour, a lot of mystery behind the figure 5 and there ’s all the creative work behind it, as well as the creations of the movies, the advertisements, the visuals… It’s a very rich universe.” 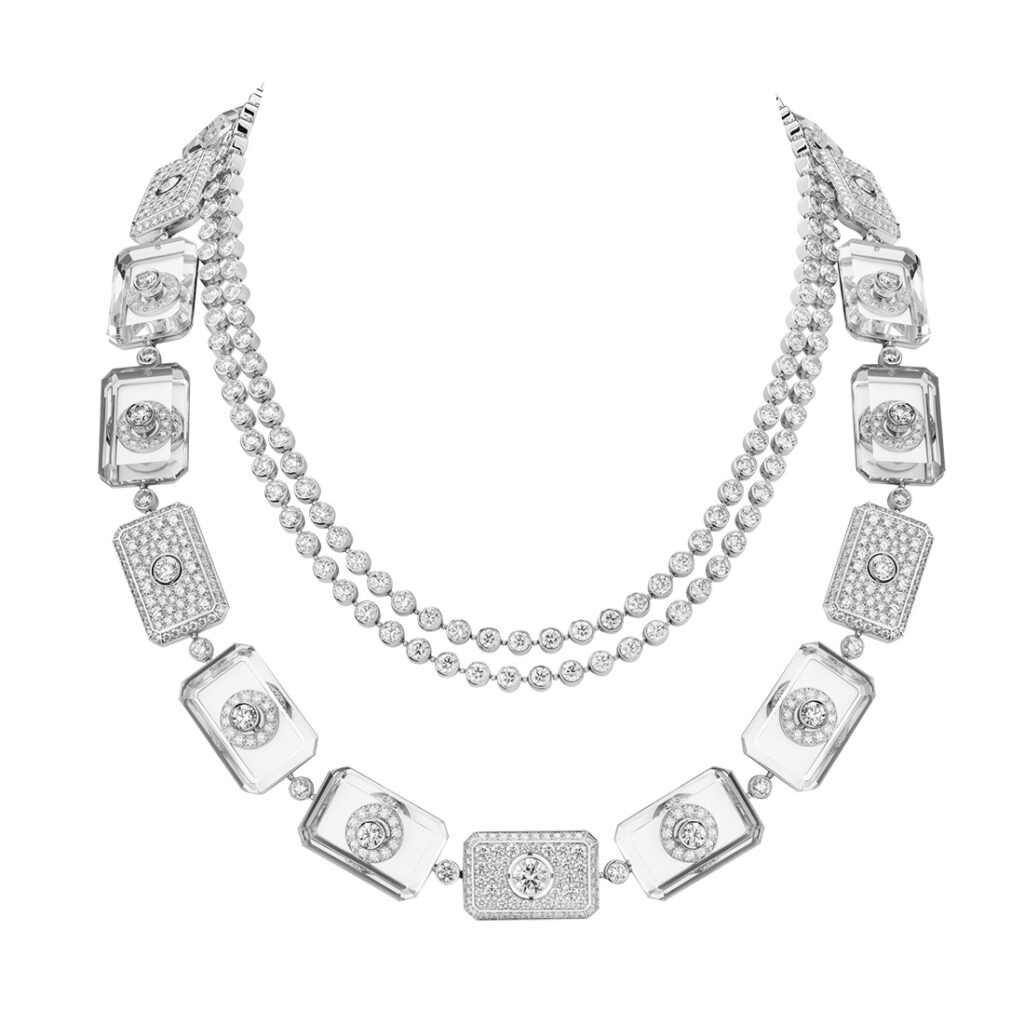 Let’s begin with Collection N°5’s structured pieces, which appear to be centred around the ideals of ‘the stopper’. The Art Deco-style Diamond Stopper ring features one emerald-cut diamond of 5.21 carats perched atop a chunky yellow gold band laced with diamonds and onyx. Similarly, the Crystal Stopper necklace showcases a flurry of rectangular rock crystal littered with diamonds. For something slightly softer, the Ribbon Stopper earrings come replete with delicately hanging ribbons in white gold and diamonds. Femininity is typically driven by ‘the flowers’ chapter, in which vivid interpretations of the fragrance’s ingredients, including ylang ylang, jasmine and rose, run across rings, necklaces and brooches. Think: pearls, pink sapphires and pink gold beautifully lighting up a flurry of pink-gold rose petals in the May Rose ring; and the very demure Grasse Jasmine jewellery watch through which pearls gently lap around the wrist while a diamond jasmine flower cascades from a yellow sapphire face. 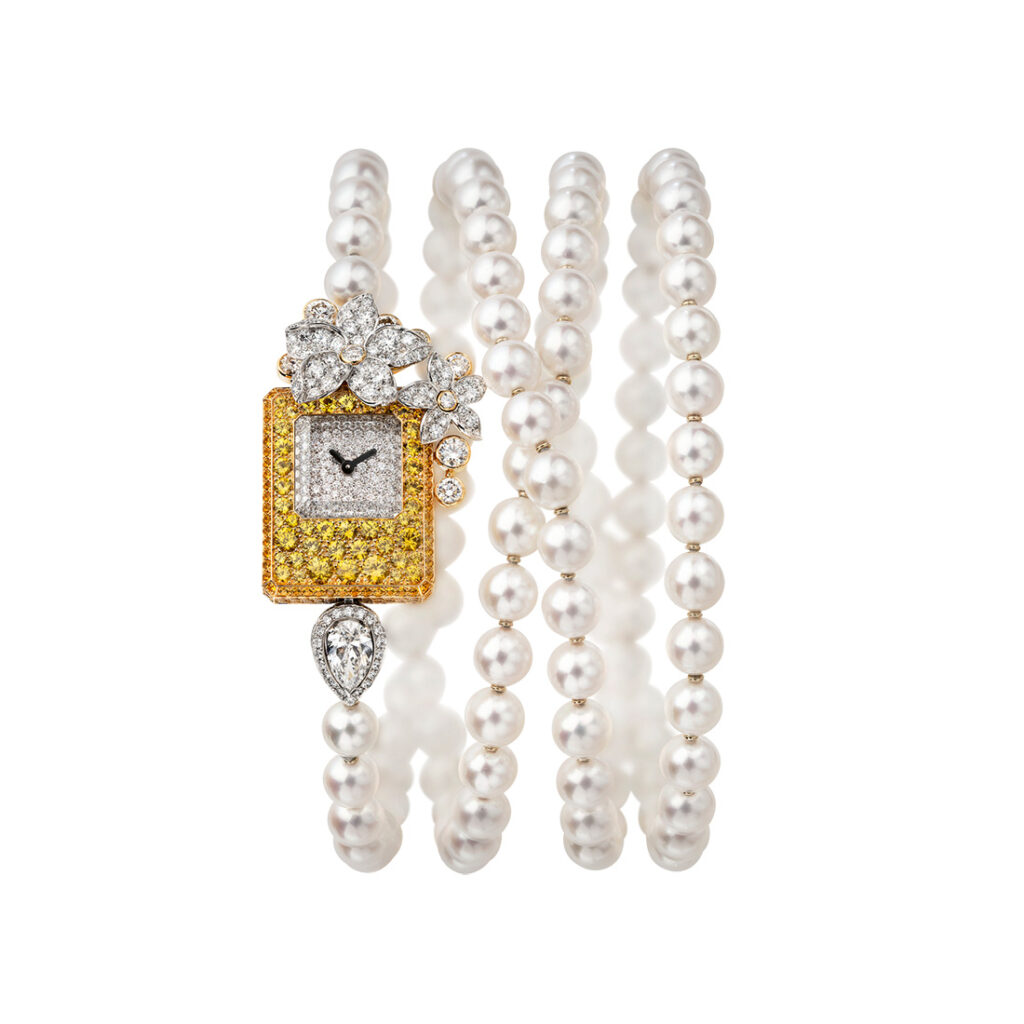 For devoted Chanel high-jewellery collectors there are plenty of pieces brimming with the house’s DNA, such as the May Rose necklace and the Grasse Jasmine bracelet – both undeniably feminine and prim. “I don’t find it difficult to be creative, but instead to know when to take the decision to stop,” says Leguéreau of completing each collection. As we walk further through the 123-piece collection, his boundless imagination rings truer and truer. “What inspired me is creating jewellery that’s very comfortable and is not to be put in a safe or in a window, but jewellery meant to be worn by women,” he says. “It should also be timeless, this is the inspiration that I caught from the 1932 collection and that I bring into each collection.” Elements of timelessness and wearability run through each of the five narratives – Leguéreau’s studio sits cheek by jowl with the Chanel fashion ateliers, and he regularly leans on the fitting models to pilot pieces during the design process – but they’re arguably most prevalent in the sillage phase. Here, Leguéreau’s skill is in capturing the intangible nature of an olfactory explosion through tangible elements such as diamonds and gold. “When you smell the fragrance, you have a certain sensation. This is what I tried to feel and understand and translate into the jewellery designs,” he explains. In sets such as the Blushing Sillage, rubies take centre stage with myriad diamonds, spinels, garnets and yellow sapphires blooming around them. When placed across the décolletage or wrist, pieces easily evoke feelings of the dewy scent bursting across the skin as it’s released from the bottle to wearer. 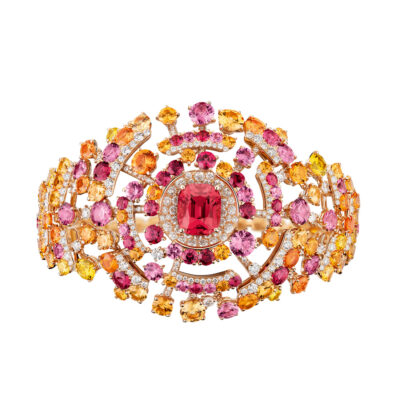 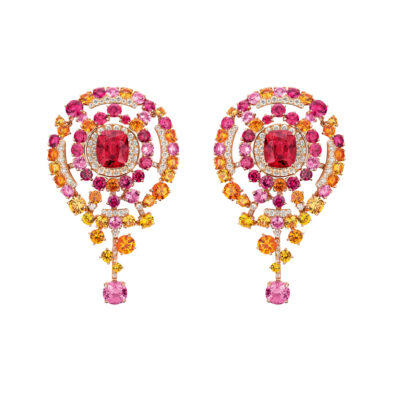 Colour also plays an integral role, especially in iterations of the bottle where Leguéreau leans on yellow gold and yellow sapphires to embody the liquid. “For me, it was natural: the juice, the colour of the fragrance is a gold colour, a warm yellow gold, in fact. And it could change with the light into a more rich yellow, pale or golden, and it was what I wanted to show and bring into the collection.” The colour red also emerges in select pieces such as the Ribboned N°5 rings, where rubies dance across reimaginings of the iconic numeral. Finally, considering that the original 1932 Bijoux de Diamants collection was an homage to diamonds, where do they factor into Collection N°5? “Diamonds interpret the richness of N°5 – it was important for me to have the diamonds in the collection,” says Leguéreau. Look towards pieces such as the Eternal N°5 brooch, in which baguette cuts define the shape of a number five and dance around one glistening 5.07 carat diamond. 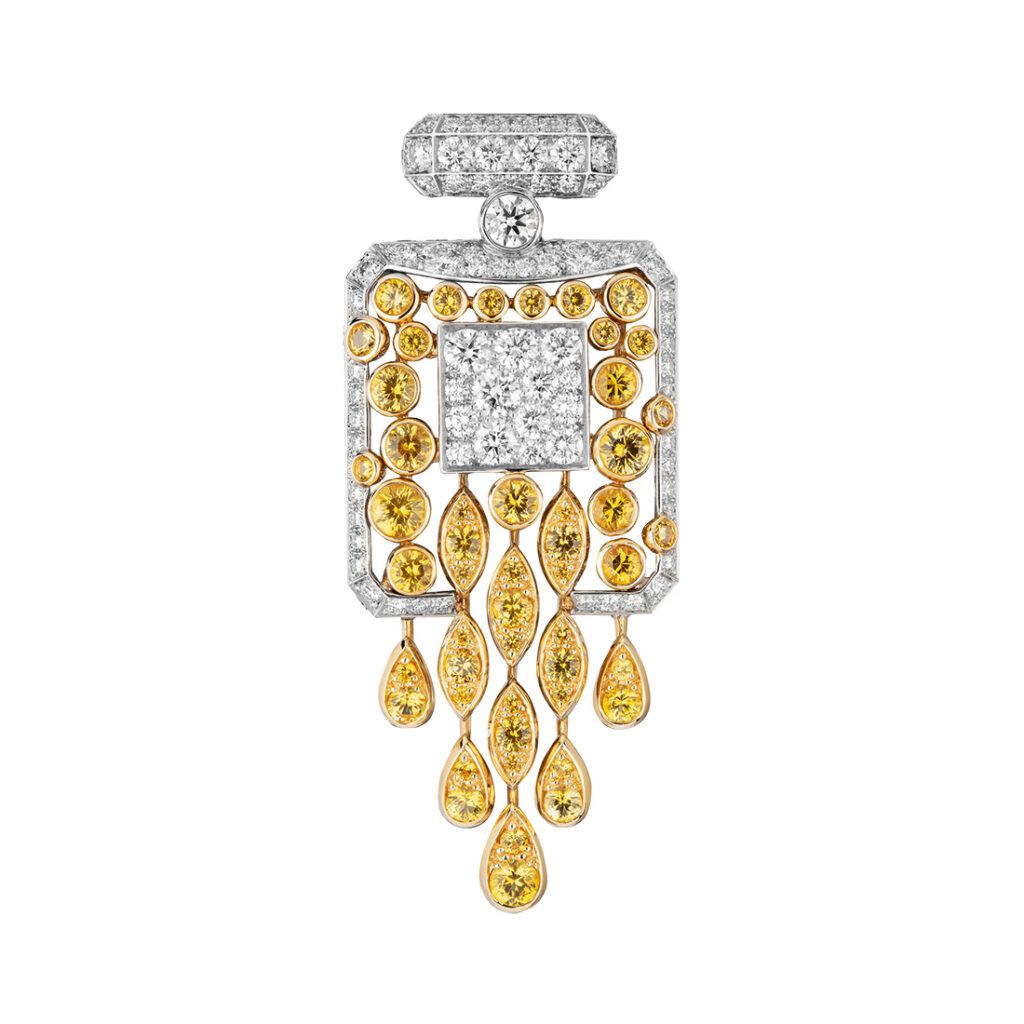 After demanding two years of Leguéreau’s time, what is his hope for this collection? “I want the jewellery pieces to bring the same feeling that the perfume brings to women,” he says. “Maybe a woman that wears N°5 jewellery pieces would love to wear it with the N°5 perfume; it will be a beautiful combination.” Explore the collection

Read Next: Cartier’s New Timepieces Blur The Line Between Watchmaking And Haute Joaillerie