The first time Christian Dior met a fortune teller, he was just 14-years old. A tale that has now become part of the history of his eponymous fashion house, the palm reader explained that even though he would suffer poverty at times in his life, he would eventually succeed through women, who would be lucky for him. And whether or not you share the designer’s faith in superstition, it can’t be argued that her visions came true – he went on to found one of the most revered couture houses in the world, after all.

Fast forward just over a century later, and the same fascinating world of the divinatory arts that so inspired Monsieur Dior have once more been interpreted by Maria Grazia Chiuri, who looked to tarot cards for her spring 2021 Dior haute couture collection, reimagining their mystical characters and symbols through a magical collection reminiscent of an Old Masters painting.

Following that fateful day in a seaside town in northern France, Christian Dior’s tendancy for superstition grew, and he would put his trust in fortune-tellers – and lucky charms – for the rest of his life, as told by head curator of the Christian Dior Archives, Soizic Pfaff in an exclusive video. “He [Dior] was superstitious, and after founding the Maison he continued to see his clairvoyant regularly,” she explains. “He was so superstitious that he kept six different charms in his pockets including a four-leaf clover and a small bit of wood to touch regularly. Before long, in his collections, he named pieces after card games, superstitions, and stars.”

Case in point? In spring/summer 1950, the Tour de Cartes (card trick), Trèfle à Quatre Feuilles (4-leaf clover), Cartomancienne (card reader), Fétiche (talisman) and the Fer à Cheval (horseshoe) all made an appearance. He also named a number of his dresses after his superstitions, including the Ligne de Chance dress from spring/summer 1951, translating to fate line, and the Bonne Etoile (lucky star) from spring/summer ’52. 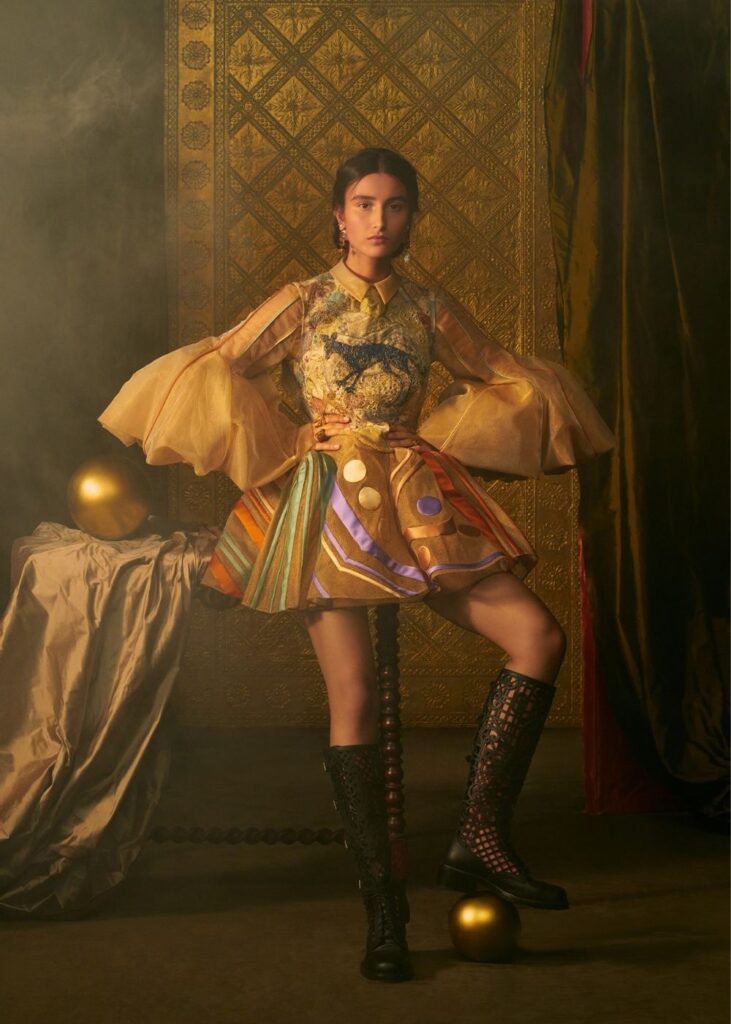 Since then, these same superstitions have been reinterpreted by the house’s many creative directors through the years, including Gianfranco Ferré who crafted playing card motifs on dresses and scarves. However Grazia Chiuri has by far been inspired most by the theme of divination, which was clear from her very first haute couture collection. Here we saw a magnificent taffeta evening gown that evoked the theme of the tarot, while her Constellation dress was represented by signs of the zodiac including Cancer and Aries.

For her 2021 collection, the theme is brought to life through a sumptuous short film entitled ‘Le Château du Tarot and created by Italian director Matteo Garrone, which tells the tale of a young woman who goes on a journey of self discovery and encounters a series of symbolic figures in a mysterious castle.

A colour palette of dusty jewel tones and old gold draws the whole collection together, while illustrations by Pietro Ruffo were worked into several deigns, and celestial motifs appeared in delicate gold threat on a faded pink and blue jacquard sack-back gown.