There’s an underlying revolutionary mood to the summer designs by Miuccia Prada, who is setting a new benchmark for power dressing

There’s an unfortunate stereotype that is attached to women who participate in marches, parades or protests, and it has to do with their lack of stylish outfits. They’re either army soldiers, dressed in camouflage uniforms, politicians, dressed in primary-coloured suits, or offbeat activists, dressed in dishevelled, grungy clothing. But amid the political unrest currently plaguing our world, and powerful push-back by outraged advocates for change, Miuccia Prada has proposed an alternative revolutionary dress-code for spring/summer 2018. Her collection this season was designed for the woman who can be “active and present today,” she said to the press after her Milan show. “I am suggesting militant women in a very practical way, through clothes, which is what I do.” 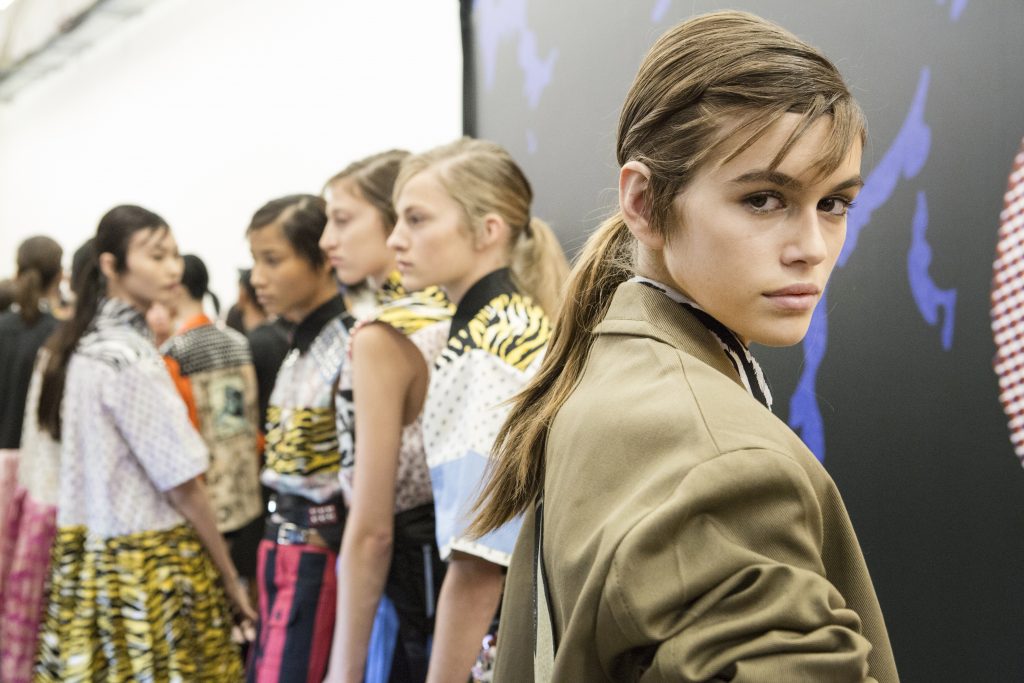 Prada’s spring/summer 2018 show was powerful, motivating and devoid of subtleties. Models strutted down the catwalk dressed in work blouses tucked into patent leather skirts with utilitarian pockets, finished off with studded belts. Jacket lapels were oversized with dual tones, trousers were designed with wide cuffs, and tailored shorts were offered up as empowering garments for the contemporary woman. And in true Prada style, trendy trenches were paired with knee-high socks and spikey brogues. 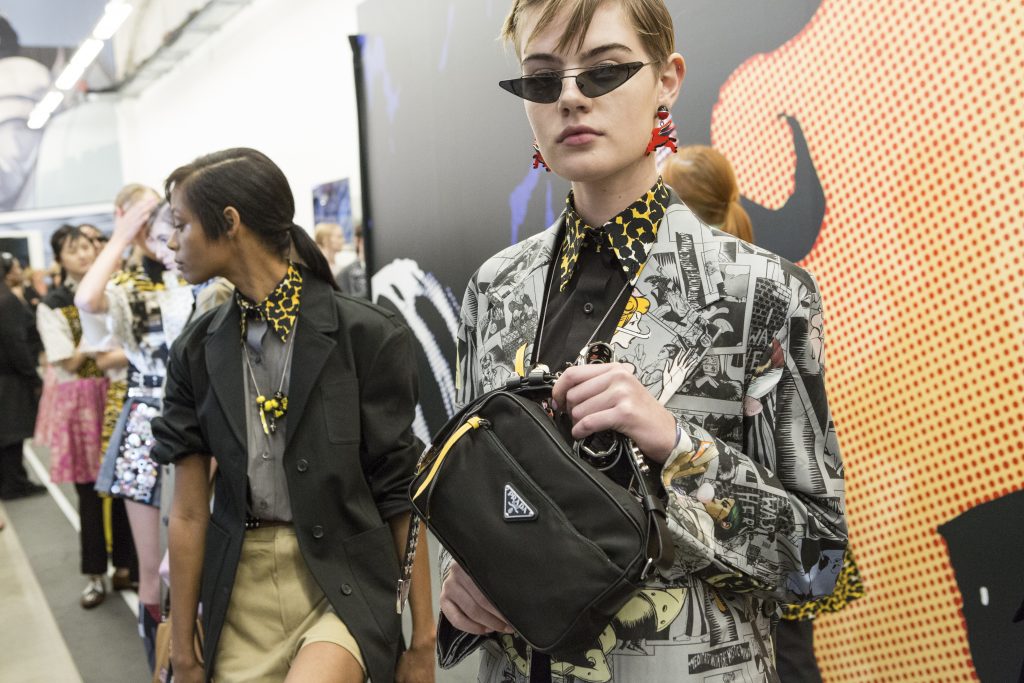 Prada’s spring/summer 2018 woman means business — but that doesn’t make her mean. She has a sense of humour, shown in her liking for patchwork prints, thrift shop buttons sewn onto panels of shorts and jackets, and banana-shaped earrings. She’s open to sporting polka dots and zebra stripes, and sometimes she’ll even layer a brocade dress or bow-topped bustier, over a pinstriped shirt. It’s this pulsating eccentricity that takes Prada’s expertly-tailored designs to the next level. And one of the highlights of the fashion house’s latest range is the way that the work of contemporary cartoonists is woven into clothing and accessories. Much of the collection showcases layers of graphic prints created by female manga artists and cartoonists, and it’s the heroines from these images that were Miuccia’s muses. Snippets of the spunky illustrations, many of which are completed with a speech bubble that reads ‘Prada’ in bold lettering, feature on the season’s It bags for both women and men and are captured in an accessories campaign called ‘In the Cities’, shot by Belgian photographer Willy Vanderperre in Los Angeles. Accessories are a key retail category of the Italian fashion house, and while comic-strip characters are plastered across some of the brand’s latest purses and shoes, the season’s utilitarian theme is reimagined in another range of bags too. Black nylon, naturally, is the material of choice, appearing on satchels, crossbodies, backpacks and bum bags, and adorned with strips of punky metal studs. These timeless pieces punctuated with steely, grunge-inspired elements will no doubt appeal to millennial consumers who seek practical purses, coupled with the timeless Prada aesthetic. Along with other key designs of the season, they will be available at the new Prada boutique in The Dubai Mall’s Fashion Avenue, opening at the end of this month. Whether you’re lobbying to invest in a coat decorated with comic-strip prints, a studded nylon bum bag or merely a pair of knee-high Prada socks, you won’t have to rally hard. 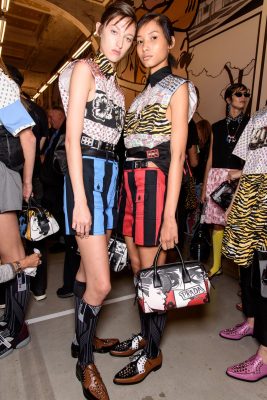 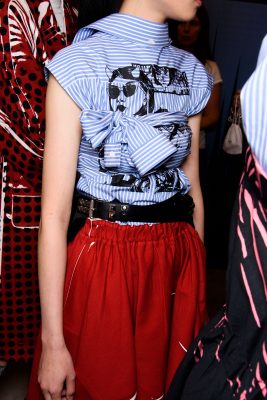 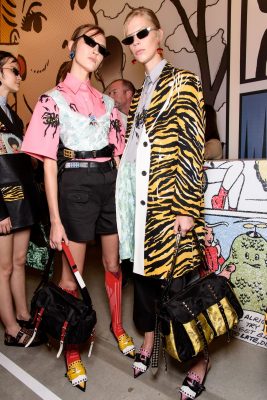 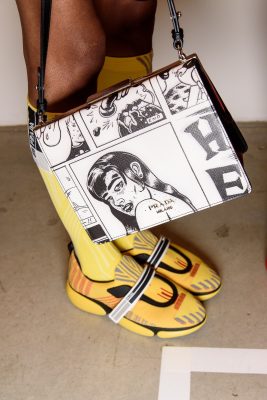 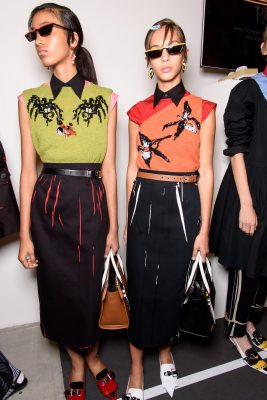 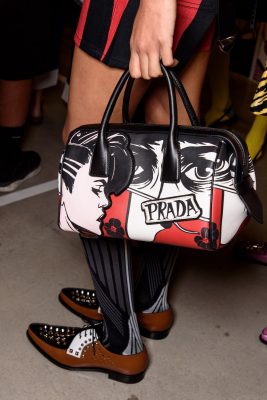 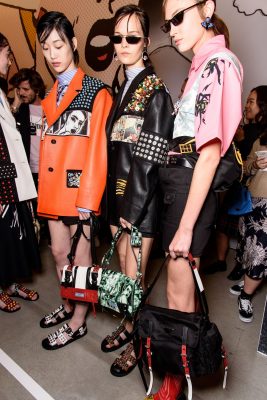