Digital artist Ignasi Monreal’s collaboration with Gucci continues for spring/summer 2018, he tells Natascha Hawke what it’s like to live inside his head

If Surrealism is the “irrational juxtaposition of images” then Monrealism should be the bonkers depiction of high fashion. Trust Gucci, under the creative direction of maximalist Alessandro Michele, to welcome the surreal vision and humorous expression of Spanish artist and illustrator Ignasi Monreal into the Gucci hub to take fashion advertising into a new realm. After all, Michele is a risk-taker if nothing else.

Inspired by everything from Japanese Manga and French and Italian comics, to the idiosyncrasies of everyday life, Ignasi has loaned his illustrative genius to fashion a few times, creating digital artworks for numerous brands including Dior, J.W. Anderson, Louis Vuitton and Christian Louboutin, but insists it was Gucci, who he has worked with on various projects, that first lured him into the world of fashion after discovering him on Instagram. “Gucci were the first luxury brand to reach out to me to do something. The first thing we ever did was the Gucci brand series, and from there it just went uphill. In a good way,” he laughs.

Uphill is a slight understatement if ‘billboard success’ is anything to go by. After working on December 2017’s Gucci Gift Giving, a series of around 80 images, most recently his work is displayed on Gucci Art Walls around the world: one in New York’s SoHo standing at 760-square metres, which he affectionately calls “the guys with the glasses” showcasing two of Gucci’s spring/summer 2018 sunglasses styles; a 176-square metre wall in Milan’s Largo La Foppa, inspired by a fusion of Jan van Eyck’s famous 1434 painting, The Arnolfini Portrait, and The Garden of Earthly Delights (1490- 1500) by Hieronymus Bosch, and a newly unveiled wall in Hong Kong’s D’Aguilar Street. 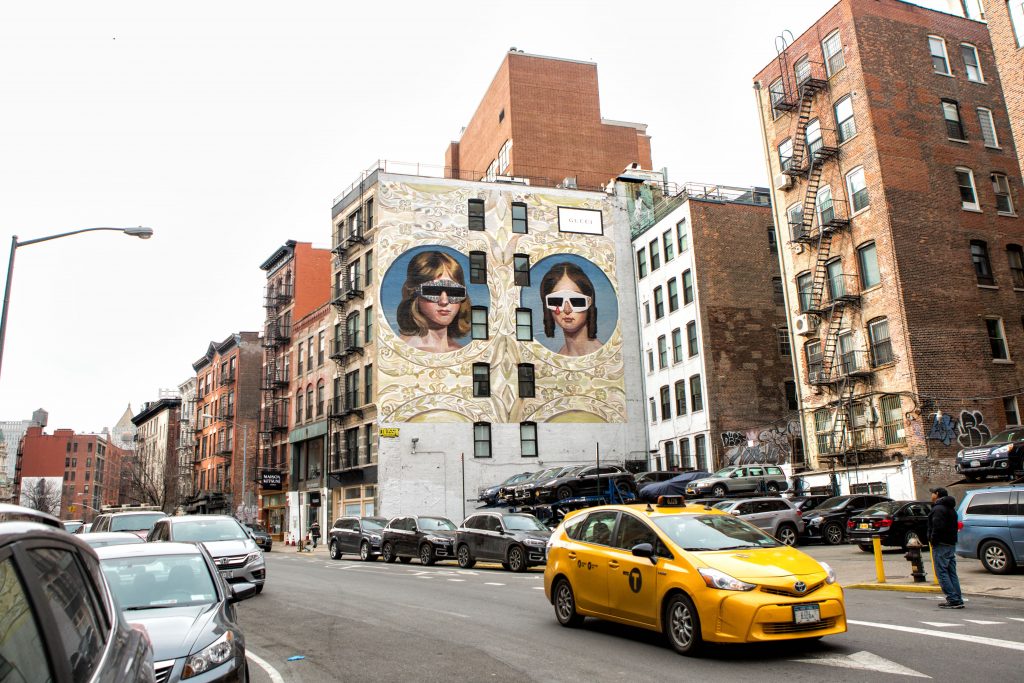 We can expect to see more of his work plastered on billboards and throughout magazines over the coming months as Gucci rolls out the spring/summer 2018 advertising campaign, dubbed ‘Utopian Fantasy’. A series of 60 magical, photorealist artworks, most with surreal narratives, inspired by a selection of artsy references. “There’s Bosch, there’s Ophelia, there’s a portrait of Queen Elizabeth I that I referenced, there’s Caravaggio, there’s Renaissance, there’s a mix from here and there,” says Ignasi, revealing that of all of them, one image stands out in his memory because of the story behind it. “There’s one of this guy sleeping and there are two cherubs bringing a post-it down… those two cherubs are painted on the ceiling of the office I was working in at Gucci HQ in Rome. I had terrible Wi-Fi and so had lots of issues sending the files. The two cherubs in that campaign image are holding a post-it with a Wi-Fi password that hopefully would work. That’s the joke… it comes from a real place. That doesn’t make it my favourite, but it has a story on a personal level.”

So it seems even the surreal is derived from the real? “In my own personal work I like to work more from reality — actual portraits or still-life, things that actually happen around me. I work from my life,” he explains. But when it comes to advertising and keeping clients happy, it’s a different ballgame. “With Gucci it’s a luxury brand at the end of the day. I borrow the clothes and take photos for reference just to make sure that they look exactly as they are, after all it’s a campaign so it has to look real. There’s a lot of detail, patterns, embroideries, textures and materials that have to be represented faithfully.”

Has this sudden global appreciation of his artworks gone to his head? Not at all. “The impact of the work has been monumental. They’ve [Gucci] put it everywhere. I am amazed myself, I can’t believe what’s going on. They keep me motivated and surprised,” he says from his studio in London, noting his gratitude to the brand for giving him full creative freedom. “It’s amazing. I’m not just saying that. They are one of the best clients I’ve ever had. They’ve given me a lot of trust and a lot of room to do what I’ve wanted. They give me a lot of freedom and are very supportive.” So what’s next? “There’s a few things I am working on, but they’re top secret, you’ll find out soon enough.”