Maria Grazia Chiuri’s S/S18 collection for Dior once again explores the importance of women in society, only this time her focus is on art. In an essay entitled 'Fashion, Freedom, Feminism' for MOJEH's February 2018 issue, managing editor Natascha Hawke delves into the designer's thought process.

It seems appropriate that at the time of going to print (January 25th 2018), Christian Dior haute couture spring/summer18 had just shown in Paris, vying for attention against media reports focused on the success of the Women’s Marches that took place during the two days prior, where over one million women around the world turned up to protest. As Maria Grazia Chiuri’s girls strode the runway with tattooed slogans along their collarbones, the sentences borrowed from André Breton, founder of the surrealist movement and author of the Surrealist Manifesto, we were reminded again of her insistence to deliver a message through her collections season-on-season: more than just great fashion, she has something to say. A lot has unfolded since the ‘We Should All Be Feminists’ slogan T-shirts of spring/summer17  inspired by the Chimamandab  Ngozi Adichie TED Talk of the  same name, which made their  debut in September 2016, pre- empting the first Women’s March  the following January, the downfall  of Hollywood’s powerhouse  producer Harvey Weinstein,  and the subsequent #metoo  and Time’s Up campaigns. The T-shirts have become symbolic of  the beginning of what has been  a very important time for modern women’s empowerment and a vehicle for the feminist message.

More than a designer, as the first female artistic director of Dior since it was founded in 1947, Maria Grazia has made it her business as an artist-activist to deliver collections with purpose. Artfully choreographed around creating beautiful clothes that remain complementary to the style codes of one of Paris’ oldest houses, but with a healthy dose of intellect and public dialogue designed to provoke thought.

She has said that her Dior is for the women of today, not the women of 50 years ago, and questioning the place of women in society is therefore a natural starting point. As is questioning the relevance of the signature skirt suits and Bar jackets of the Dior of the past, to today’s customer. For spring/summer18, Maria Grazia has turned to the essay by American feminist historian Linda Nochlin entitled Why Have There Been No Great Women Artists? published in the Artnews journal in 1971. The author posed the question to highlight the lack of women documented throughout the history of art, coming to the conclusion: because it was written by men. The essay title provides the slogan for this season’s coveted T-shirt, appearing on model Sasha Pivovarova for the opening show look. 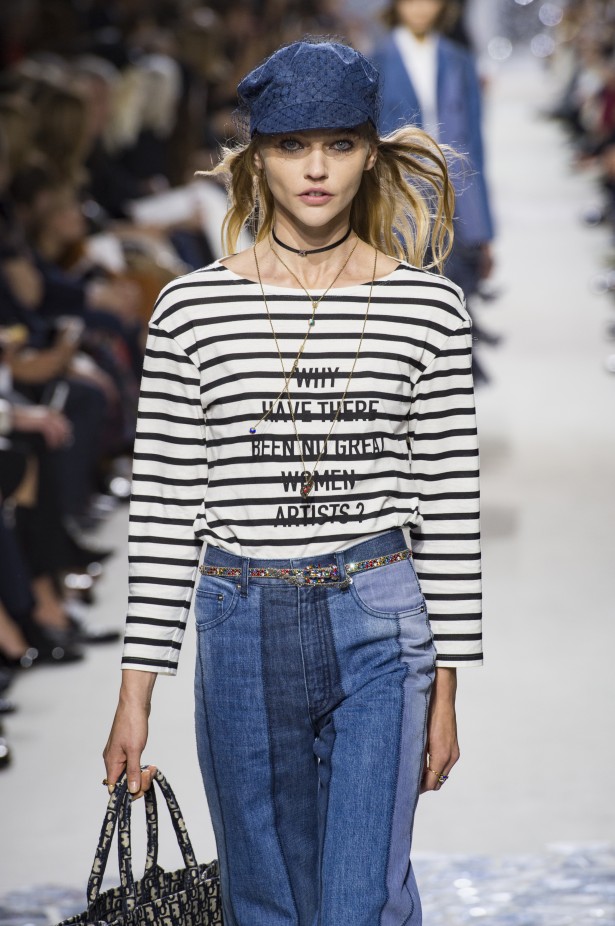 During her research in the Dior archives, Maria Grazia came across photographs from 1965 of the artist Niki de Saint Phalle with Marc Bohan, the then creative director of Dior. She became intrigued by the artist, once a fashion model, and her sculptures of extraordinary women, the Nanas, and the iconography in her Tarot Garden, a 14-acre sculpture park in the Italian village of Capalbio in the Tuscan countryside.

“I knew Niki de Saint Phalle through her artwork, especially the Nanas, these impressive ‘wobbly’ female figures, because they don’t correspond to an abstract idea of femininity. She is an example of wild and free creativity, constantly questioning life in the art world. Her message retains a timeless force, because it relates not only to emotion, but also to intellect,” offers Maria Grazia. The colourful iconography seen on chiffon dresses, Breton-striped sweaters and tulle skirts are borrowed from the artist’s Tarot Garden. The broken mirror mosaic that provided the backdrop to the runway show and the mirrored embellishment on dresses, also appears on her sculptures. 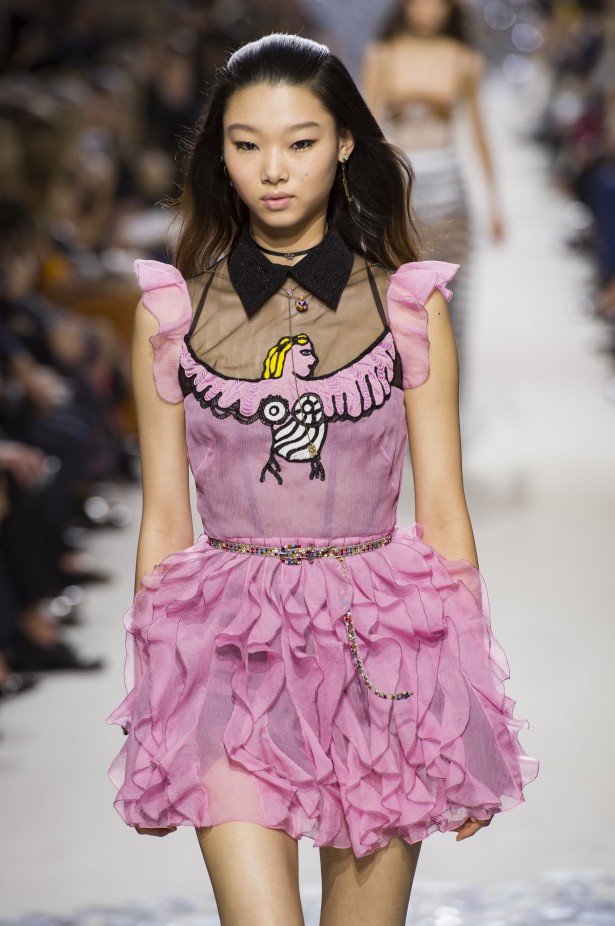 The ’70s-style denim, too, is a direct influence of Niki de Saint Phalle’s personal style, often pictured in wide-leg jeans in her heyday, as are the chic berets designed by Dior’s long-time collaborator, the milliner Stephen Jones, who has created the hats for the house for the last two decades. “Niki de Saint Phalle believed that her clothes were also part of her creation as a sculpture, that she actually was a living sculpture and quite famously her signature hat was a little beret with a signature veil,” Stephen tells MOJEH. “The French-ness is really embodied by the use of veiling and that feeling of Left Bank chic, which is so Parisian.” Other narratives found in the collection are seen in the references to Marc Bohan’s designs for Dior in the Sixties. Little dresses and jumpsuits, occasionally worn with full skirts that open at the front, large polka dots, black and white checks, belted safari jackets and masculine shirts all make appearances for spring/ summer18, inspired by previous Dior collections under his direction, adding to the distinctly retro-modern vibe. It is Maria Grazia’s ability to borrow from intellectual sources, the Dior archives and from her own cultivated experience, without confusing her personal message, that creates the appeal in her collections. Commercially, she understands the importance of house codes to loyal customers, while at the same time appealing to a newer, younger, future generation with her Instagram-friendly logo bags, J’Adior bracelets and slogan T-shirts.

Her message for women this year? “Dior used to say that women wanted him to make them not just more beautiful but also happier. My objective, as I see it, is to give women confidence. Women today are full of freedom – wear whatever they want, and be whoever they want to be.” 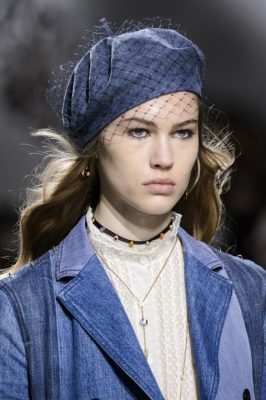 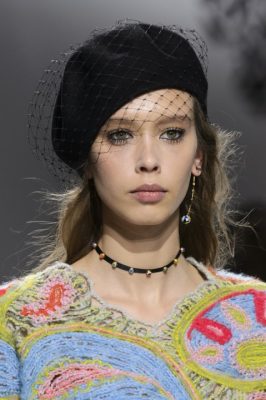 Get MOJEH’s styling tips from the S/S18 collection here, and go behind the scenes at Dior’s S/S18 Haute Couture show, here.