With a future-proofed focus on fashion, the Lebanese couturier tells MOJEH what 2020 holds for his label, ahead of his SS20 couture show

2019 was something of a landmark year for Rami Kadi. Hosting his first ever haute couture show in Paris in January, his second in July and hot on the heels of his recent couture show at Arab Fashion Week in Dubai, the 33-year-old Lebanese-American designer then began to prepare for his SS20 couture collection which will be showcased in Paris today. But what can we expect from the designer in 2020?

“I can’t tell you anything about those projects yet,” he smiles coyly, as we chat on the rooftop at La Ville hotel in City Walk, Rami’s home- from-home in Dubai during Arab Fashion Week. “But just know that I’m really excited about what’s coming up next year. Really excited.”

Graduating from Esmod Paris in 2008, a then 22-year-old Rami was selected by The Starch Foundation – a non-profit organisation founded by legendary couturier Rabih Kayrouz and Tala Hajjar that helps launch emerging Lebanese designers – to showcase his first collection. 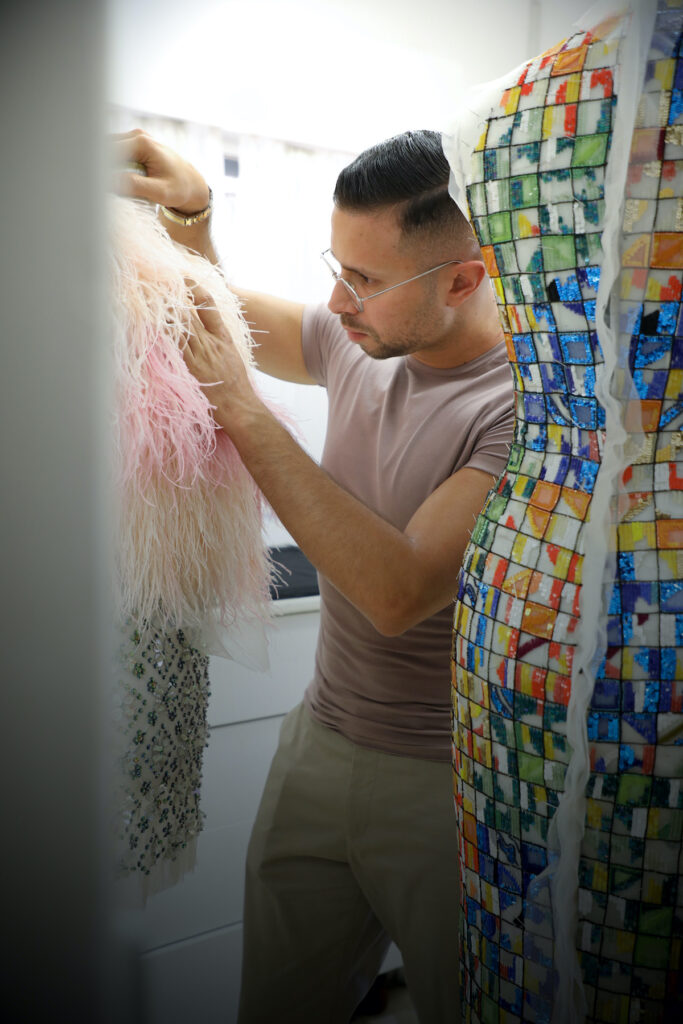 An instant success, Rami opened his own studio in his native Beirut just three years later, amassing a dedicated couture following in the region, which soon led to his work being admired by the cream of celebrity stylists. With his gowns quickly becoming red carpet regulars, worn by the likes of Jennifer Lopez and Beyoncé, Bollywood actress Aishwarya Rai, Arab megastars Myriam Fares, Ahlam and Maya Diab, supermodel Kendall Jenner and, most recently, Grammy award-winning artist Halsey, Rami’s signature, avant-garde designs have sent flashbulbs into a frenzy at countless A-list parties since his explosion onto the international couture scene five years ago.

“I have Rabih Kayrouz to thank for a lot of things,” says Rami of his rapid progression in the industry. “Because of the Starch Foundation and his belief in me – I just wouldn’t have done what I have done so quickly without him. I don’t think I would have had the courage to start out on my own. Going through the foundation at such a young age, I didn’t even know where to start. But they gave us the opportunity to start something really good, and after a year of their support, I went out and did it on my own.”

Presenting his first haute couture collection in Paris in 2014, it wasn’t until January 2019 that Rami held his debut catwalk show during Paris Haute Couture – with his mentor, Rabih Kayrouz, sitting proudly on the front row watching his protégé’s long- awaited big moment. “I just wasn’t ready to do it before then,” says Rami. 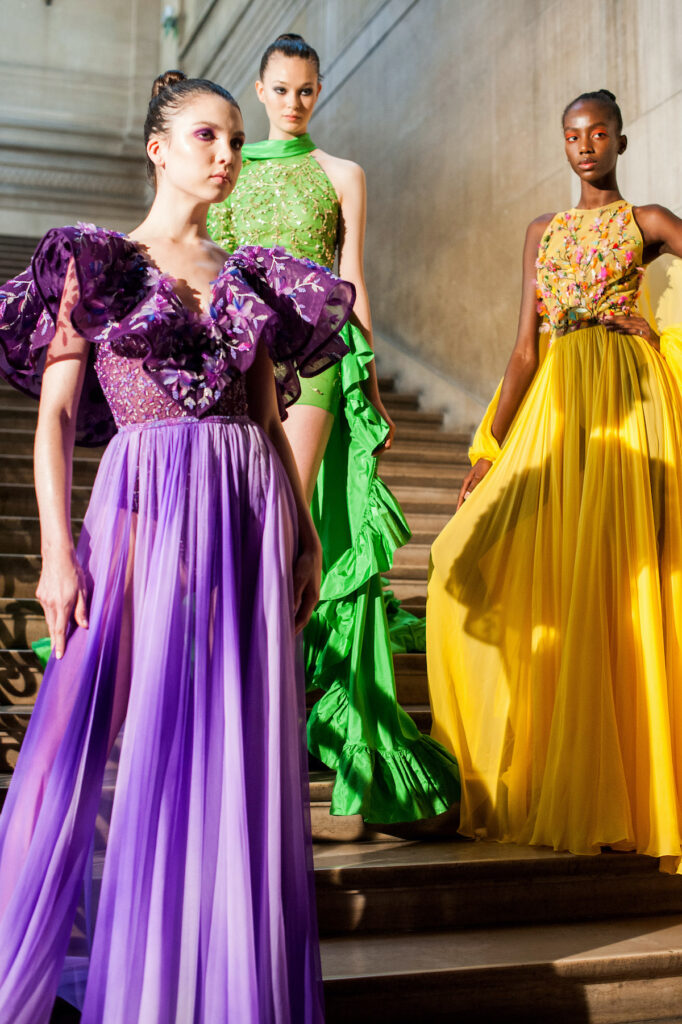 “I didn’t feel it was the right time to start doing shows. So it was more about following my feelings rather than following a strategy. But how did I feel when it finally happened?’ he laughs. “It’s like asking ‘how did you feel to have your first kid?’ It was amazing. Such an emotional moment for me, for my team, and the audience too. It was as if I was getting married; just an incredibly beautiful, wonderful moment that I will cherish forever.”

“My DNA is fashion technology; it’s our signature, actually – to make fashion and technology come together,” Rami explains. “We always try and use new materials, new techniques – sometimes all the techniques – but we think about it from a different perspective. It’s always the same spirit: cool, modern and glamorous, but every season it evolves. There are trials and errors as we try to be more creative with the materials, but it’s always very playful, lots of fun and I really enjoy doing it.” 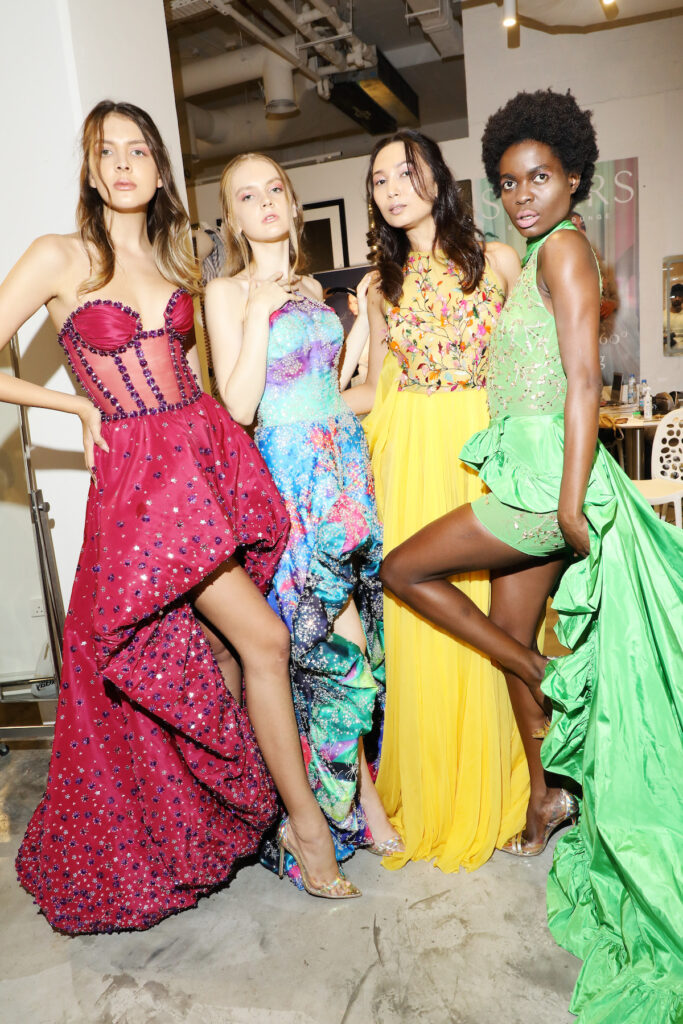 Fast-forward to July, and Rami’s second Paris catwalk show. Inspired by an 18th-century portfolio titled The Temple of Flora the designer’s love of vibrant colour and flowers was portrayed in his typically technological way, with hand- painted plastic leaves, laser-cut techniques and 3D-knitted iridescent sequins with ombre feathers used throughout.

Inspired by beauty and complexity of a flower’s petals, and his enduring muse – the strong, daring and feminine woman who never fails to turn heads – the collection centred around the exploration of the flower in every incarnation possible. “I wanted to emancipate the flower from its conventional associations with prettiness and delicacy,” says Rami, whose opening look of a one-shoulder, crystal-encrusted mesh gown worn over a neon yellow bodysuit made front row jaws drop.

“I wanted to look into the possibilities of frivolity, mischief and audacity that lie at the heart of the flower – hence the combination of botanical shapes that feature in the collection.”

Showing the SS20 collection for the second time in October at the world’s first Ready Couture store, 1422, during Arab Fashion Week in Dubai, the region’s first-ever designer acceleration hub welcomed an army of Rami’s Middle Eastern fans to see his work up close. And while no photograph or film footage can ever really do justice to the impeccable workmanship and intricacies that go into the making of each fairytale couture piece, it’s the magic of social media that a future-focused Rami cites as his primary channel of audience connection. 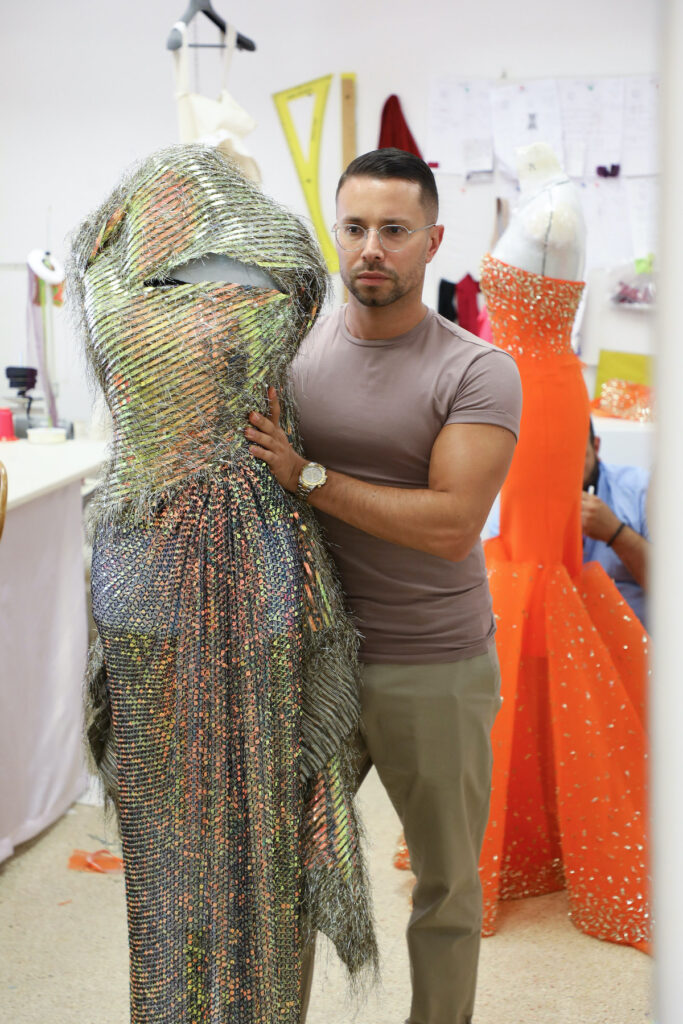 “Couture will never be anything but the ultimate in bespoke luxury. It’s hours and hours and hours of work, at the hands of hugely-skilled artisans who dedicate themselves to creating something exquisite, something of other-worldly beauty,” he explains.

“But couture is no longer just about showing those exquisite pieces to the chosen few on fashion’s front row. We have one atelier in Beirut, from Hi tech fabrics and specifications are a feature of Rami’s collections Laser cuts, hand painting and 3D sequins appeared on gowns in Rami’s Temple of Flora collection which we operate worldwide, and my first catwalk show in Paris took place at the start of this year. So social media is my primary platform from which I can expose my collection to the world.”

With technology at the heart of his business – from the innovative fabrications and materials used in his designs to the ever-growing advancements in social media imperative for the development of fashion industry – the 33-year-old is well aware of the power of the internet when it comes to the meaning of modern success. 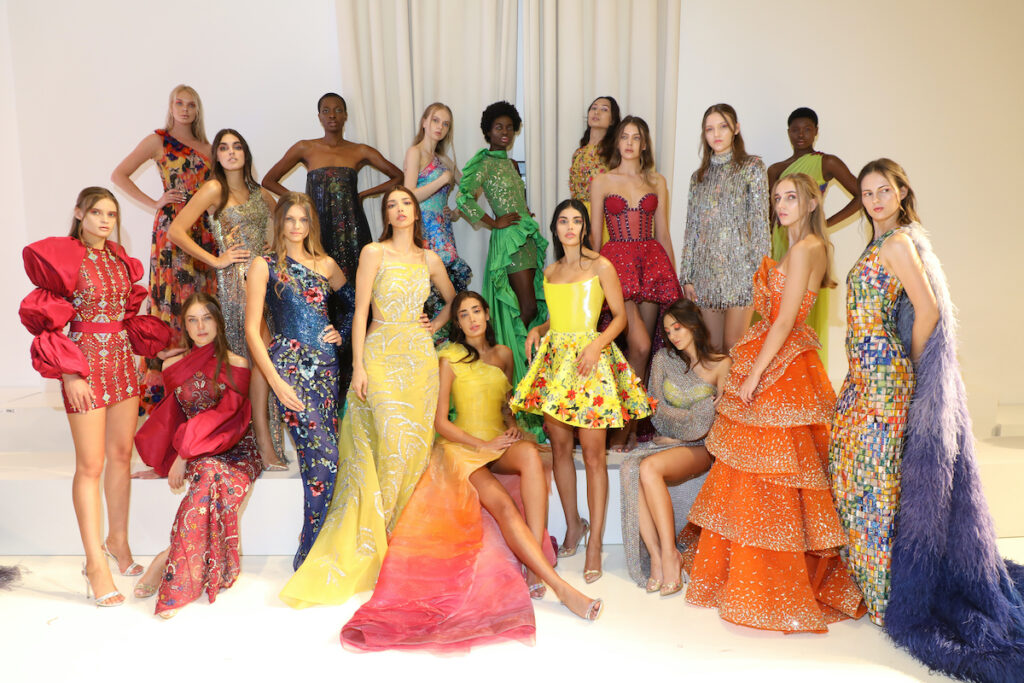 “Fashion is undergoing a huge shift right now – and it has so much to do with how social media has changed the way people get to see the world,” he says.

“Social media has both its pros and cons, especially when it comes to fashion. The industry is so fast-paced. Sometimes your collection is quickly exposed, and can reach the biggest audience. And sometimes it backfires because it loses its exclusivity because the audience sees it everywhere. But you can’t ignore it. More than that, you shouldn’t if you want to succeed both now, and in years to come.”

With his latest couture show to be revealed today in Paris, Rami’s perspective for the coming year includes numerous considerations – from both a personal viewpoint and a business one.

“We are working on sustainability. I will be using recyclable matters, and we have decreased our sustainable matter in the atelier. On a personal level, however, with everything that’s going on in my country and my city, I’m going to be doing a lot of praying. There’s so much happening right now. We need to build a better world, all together, in all ways, where everyone is happy.”