In the wake of Chanel’s AW22 Haute Couture extravaganza, MOJEH goes behind the scenes to discover the exceptional embroidery and sublime savoir-faire behind Virginie Viard’s latest collection

With its instantly recognisable elements, intimate embroideries and exquisite attention-to-detail, Chanel is always one of the most anticipated shows of Haute Couture Week. AW22 was no different, of course, with the House once more chanelling the historic savoir-faire of its ateliers into a couture collection for the present day, with an almost endless display of on-trend tweed peppered with sequinned gowns and diamond-adorned necks. Described as ‘graphic’ by Virginie Viard — a favourite word of forebear Karl Lagerfeld, the creative director noted — this year’s collection once more took pace amidst a dreamy playground constructed by French installation artist Xavier Veilhan, complete with giant spinning pinwheels and baby pink marshmallowy pouffes. 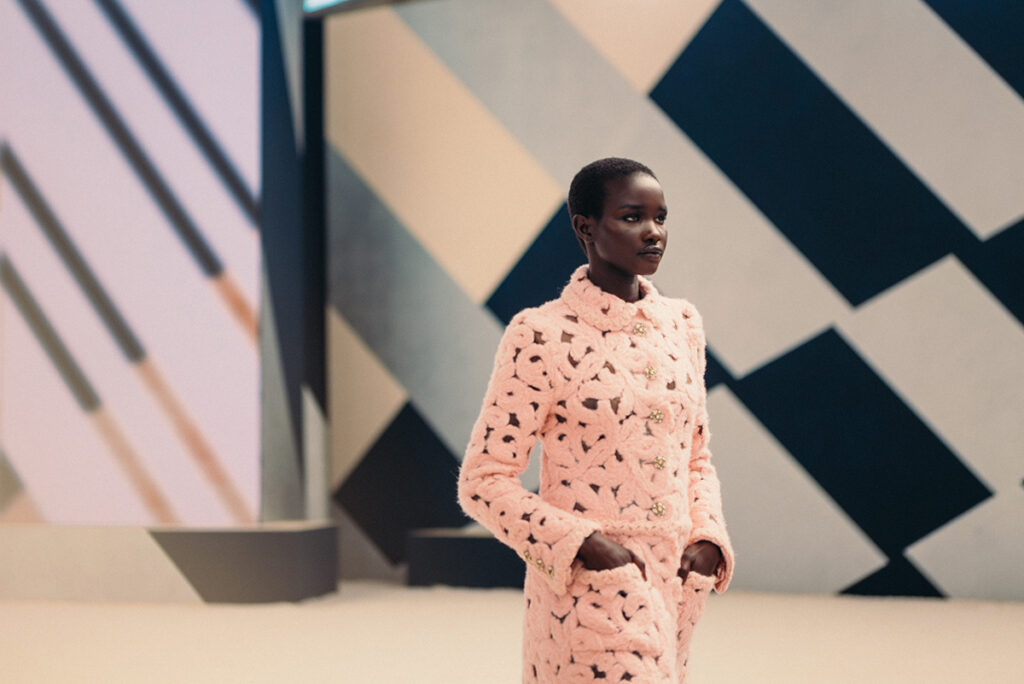 “Ever since Viard took the helm of the French fashion House following the death of Lagerfeld back in 2019, her vision for Chanel has been one of more relaxed, laid-back luxury.”

As parades of models made their way down the catwalk, eyes were instantly drawn to look 9 — a long-sleeved coat dress with Peter Pan collar and pockets, swathed entirely in pink wool and cashmere guipure lace complete with cut-outs. Unlined to retain transparency, the coat was moulded by one of the House’s Haute Couture tailleur ateliers on a seamed tulle foundation. Translating to ‘suit’ in French, Chanel works with three of these ateliers on rue Cambon, producing some of the most structured pieces in the business. Back to the coat, and its lace remains entirely inlaid except at the waist, where a tone-on-tone braid offers the impression that the dress is crafted from a single piece of fabric. A monochrome braid — which took six hours to be made by the atelier — also highlights this design, crocheted on to the collar, waist and sleeve cuffs. Ever since Viard took the helm of the French fashion House following the death of Lagerfeld back in 2019, her vision for Chanel has been one of more relaxed, laid-back luxury. That doesn’t mean she’s not partial to the odd sequin or two, however, and later in the lineup an eruption of party ensembles stole the show. Not only did we see metallic floral prints, masterful beadwork and crystal embellishments bedecking elegant evening gowns, but look 26 took the form of an incredible two-piece suit which came covered in silver sequins, combining a short, straight and extremely shouldered crew-neck jacket with matching straight skirt designed with slant pockets and a suggestive slit at the back. 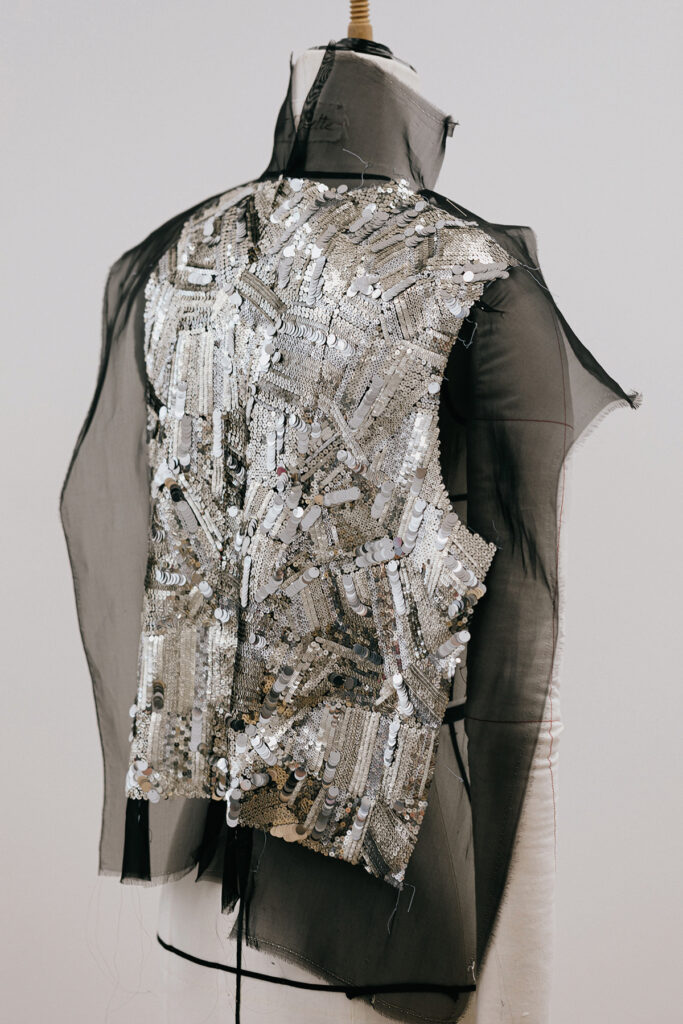 A testament to the talents of Chanel’s dedicated craftspeople, the suit’s black organza base came entirely embroidered by the House of Lesage, which joined the Fashion Métiers d’Art in 2002. Today it contributes to all of Chanel’s collections with its exclusive tweeds and exceptional embroideries, and for this AW22 Haute Couture look there were a huge 215,000 elements embroidered in total. The sequins used were of different sizes and in alternating shades of silver, designed to give the illusion of being a single material. This technique is reminiscent of the House in the 1930s, when Gabrielle Chanel liked to have block-coloured sequins embroidered over the entire surface of her fabrics. This time around, and at the request of the Chanel Creation studio, sequins were also sourced in different styles including matte, striated, shiny, sunburst and hammered, with their placements multiplying their reflections and adding even more glamour. Cleverly composed of broken lines to recall the works of Veilhan, the suit’s nuances also evoke the form of a comet — the key motif of the Bijoux de Diamants high jewellery collection created by Gabrielle in 1932. A closer look reveals precious jewelled buttons on the delicately slit sleeves as well as patch pockets with pointed flaps on the jacket, lined with a grey shiny satin crêpe. After the show closed, guests exited back through the geometric playground on a path replaced entirely with fine, white sand reminiscent of a private Maldivian island, returning back to their cars until the next season arrives. We can hardly wait. See the collection

Read Next: How To Wear The Season’s Hottest Hue