On the eve of the V&A’s Savage Beauty retrospective, Sarah Burton recalls an English rose within the hallowed vault of Paris’ La Conciergerie. 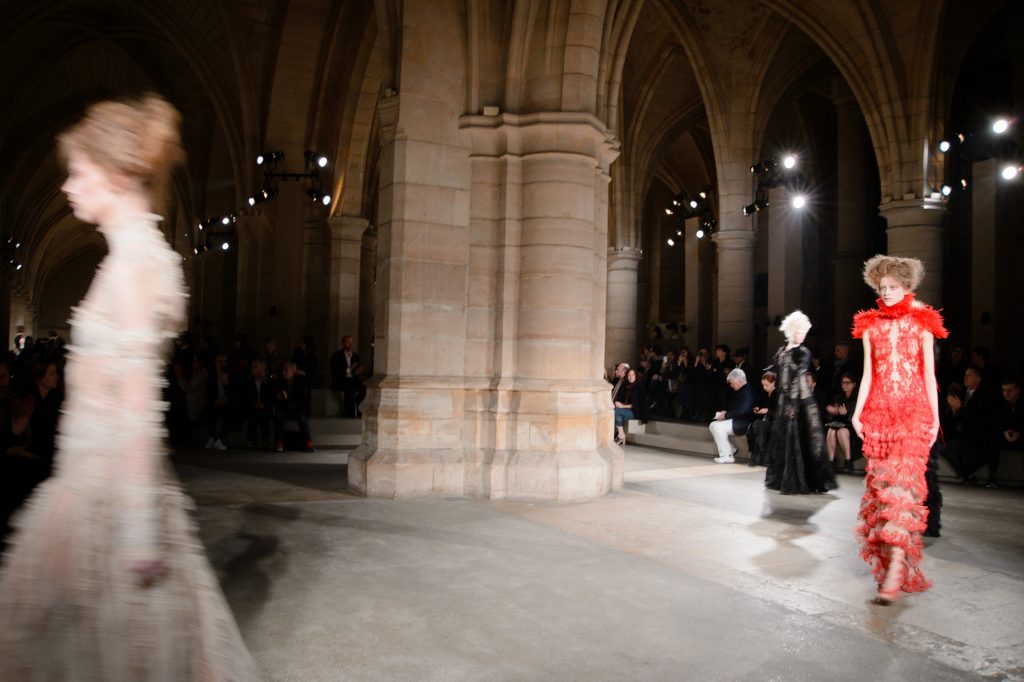 Little can deviate Sarah Burton from her romantic mindset. This season was influenced by the fragility of beauty, a notion Lee himself explored so vividly throughout his life. That fragility came by the spirit of the rose as it journeyed from bud to blossom before its inevitable decay. It was this exploration of Burton’s ‘frayed nature’ that informed an otherworldly McQueen muse, as ghostly as the arched halls she walked through. 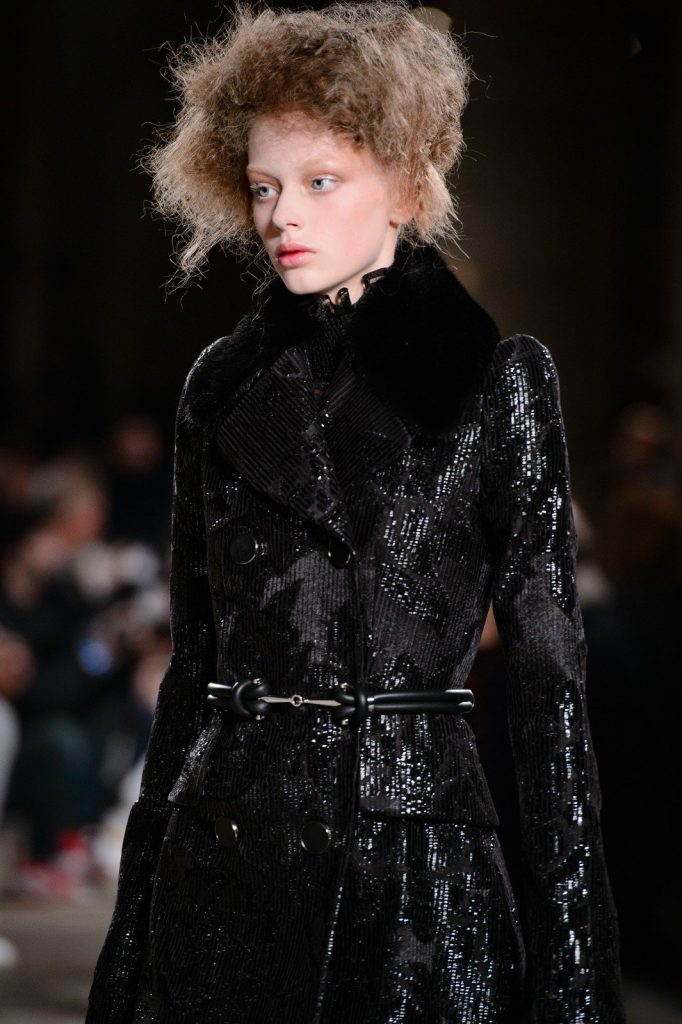 At first the rose was contained in linear silhouettes. The shows opener – a black double-breasted coat smattered with fine sheen and cinched at the waist, showcased Burton’s preservation of the flower. A movement in pleats, emerging at first from a belted jacket and then progressing into two leather bound dresses contrasted in shades of scarlet and dusky pink, sparked the opening of the bud.

Burton pulled apart the formation of a dress; exposing the midriff with an opaque layer of lace and jutting the skirt with exquisitely fine lace tiers, evocative of petals. This arrived in black at first. But the palette soon lifted in barely-there shades of pink – most successful on a high collared gown paneled with flurries of shredded organza, the ultimate embodiment of Burton’s ode to imperfection. 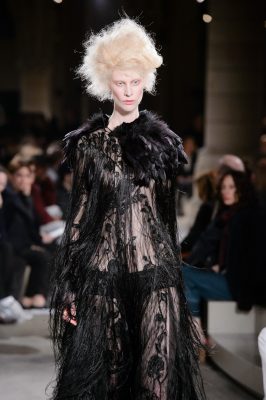 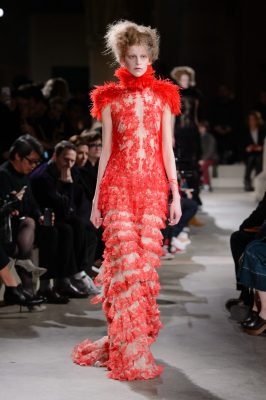 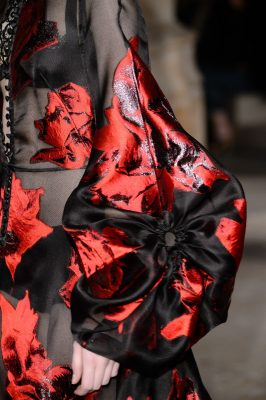 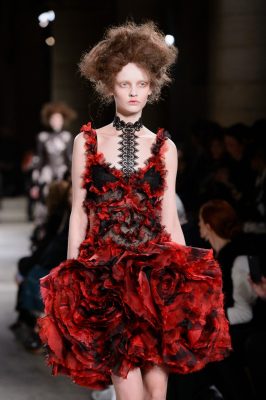 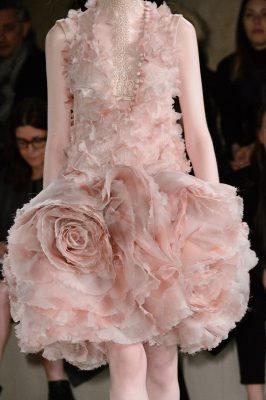 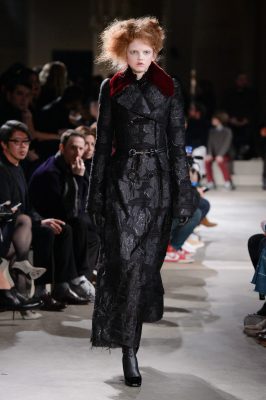 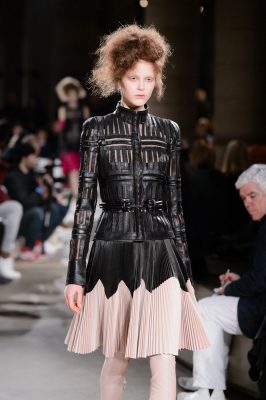 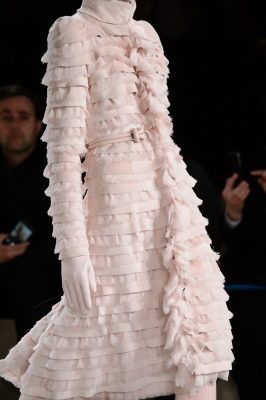 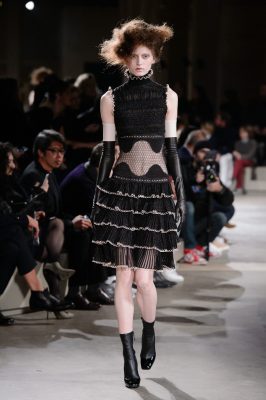 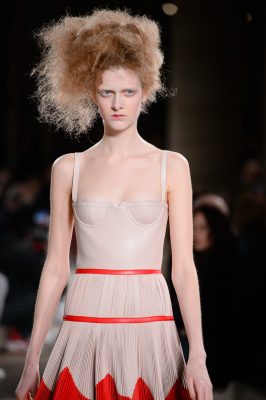 An exploration in leather undid the beauty of the first procession. Here looks arrived in powerful sways of maroon that only deepened when dominated with leather bustiers and gloves, alluding to the rose reaching maturity. This was offset with models sporting iridescent shadowed eyes in molten hues conjured by Pat McGrath, and manically swept hair via Guido.

The collection soon sprang into life in juts of distressed chiffon that plumed around forms in giant petal formations, coiling and curling as the rose hit full bloom, even if only for a brief moment. The fragility that Burton mentioned prior to the show and in the decaying rose that imprinted on the shows invite, caught wind in the last foray of distressed laced dresses, etched in a blaze of scarlet and white. The finale gown, withered in tendrils of black peacock feathers and fur spoke of Burton’s melancholic understanding that beauty, though glorious in imperfection, ultimately succumbs to death.