The 2018 Victoria's Secret Fashion Show took place last night at Pier 94 in New York City. Of course, everyone's favourite runway regulars were there including Kendall Jenner, Gigi Hadid, Adriana Lima and Georgia Fowler all clad in sparkly lingerie and a number of wings, but these were the moments that really stood out.

Adriana Lima is hanging up her wings

It official, Adriana Lima is retiring from Victoria’s Secret. The 37-year-old Brazilian model is the longest-serving Victoria’s Secret model having walked her first show back in 1999. The show paid a special tribute to her, featuring a video montage of clips from her past iconic VS moments. The video ended with a “thank you” message to Lima before the catwalk darkened and the model herself came out. She strutted solo down the runway, visibly tearing up when she reached the end of the catwalk while the crowd rose to their feet to cheer for the supermodel. 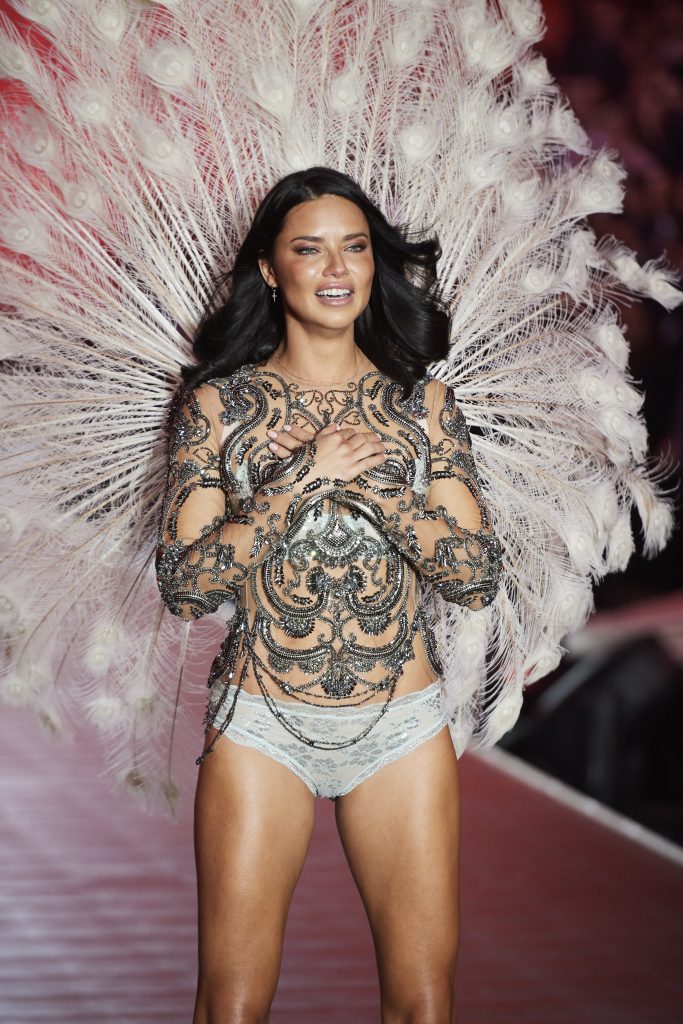 Elsa Hosk was a sight to behold as she stole the Victoria’s Secret Fashion Show wearing the $1 million Fantasy Bra. Swarovski designed the diamond-studded bra and body chain set exclusively for Victoria’s Secret. It took over 930 hours and four craftsmen to create the masterpiece, which features 2,100 Swarovski diamonds and responsibly sourced topaz stones. 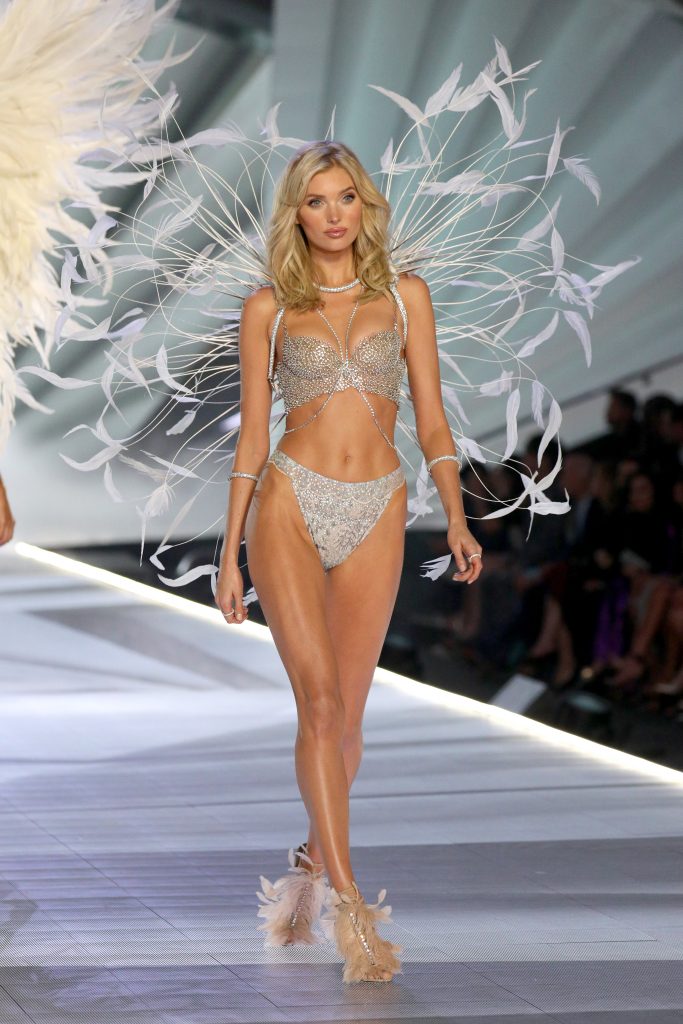 There was a special designer collaboration with Mary Katrantzou

Last year, Victoria’s Secret created a collaboration collection with Balmain and its creative director Olivier Rousteing, but for 2018, the brand teamed up with London-based designer Mary Katrantzou. Gigi Hadid was one of the models to rock Mary’s designs as she strutted down the runway in a pink floral bra, which was teamed with a floral bodysuit. Attached to her back was a backpack-style set of “wings” that was actually a floral and kaleidoscope patterned parachute. 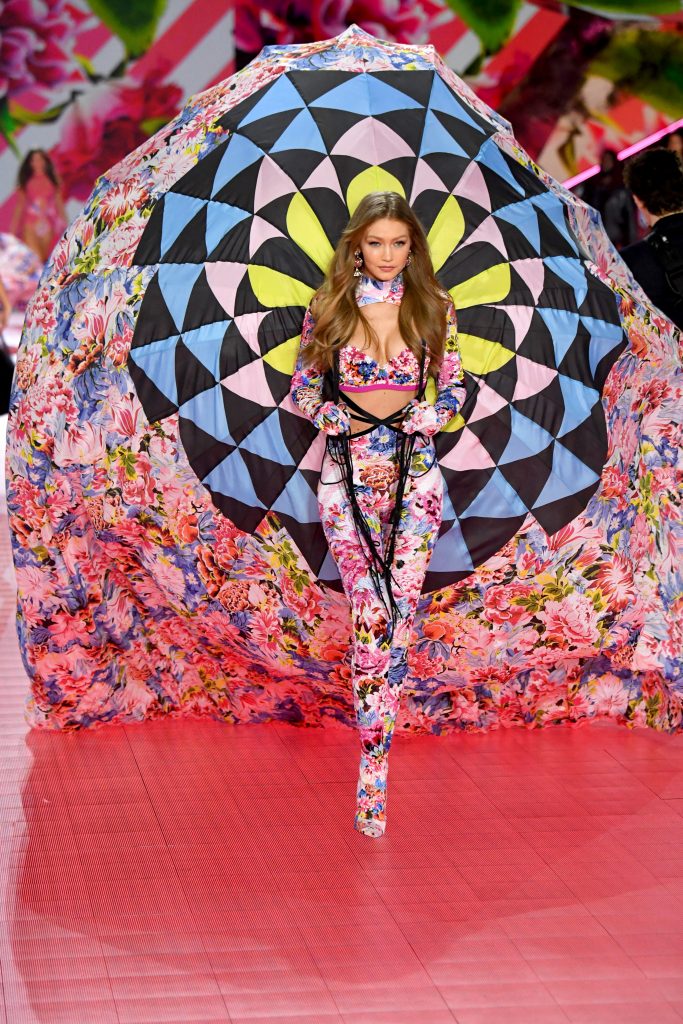 Shawn Mendes took to the stage
Shawn Mendes lit up the 2018 Victoria’s Secret stage when he performed at Pier 94. Dressed in a classic black suit with his acoustic guitar in hand, Mendes sang his hit single “Lost In Japan”, off his chart-topping self-titled album. The 20-year-old singer-songwriter mixed and mingled with VS models like Winnie Harlow as they made their way down the runway. Additional performers included Kelsea Ballerini, The Chainsmokers, Halsey, Rita Ora, Bebe Rexha and The Struts. 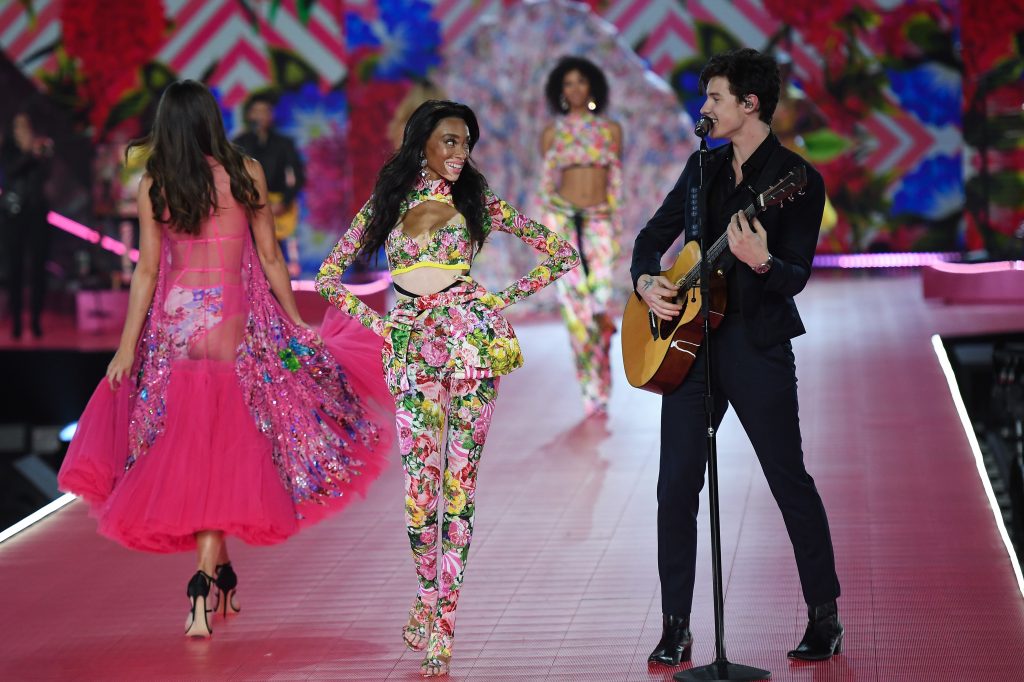 Behati Prinsloo returned to the catwalk post-baby
After a two-year hiatus, Behati Prinsloo returned to the Victoria’s Secret runway last night. The model last walked the catwalk in November 2015, and took a brief break to welcome her two daughters with Adam Levine, 2-year-old Dusty Rose and 7-month-old Gio Grace, who was born in February 2018. Prinsloo modelled two looks during the show: a black corseted one-piece and a red plaid lingerie set with a giant cape. 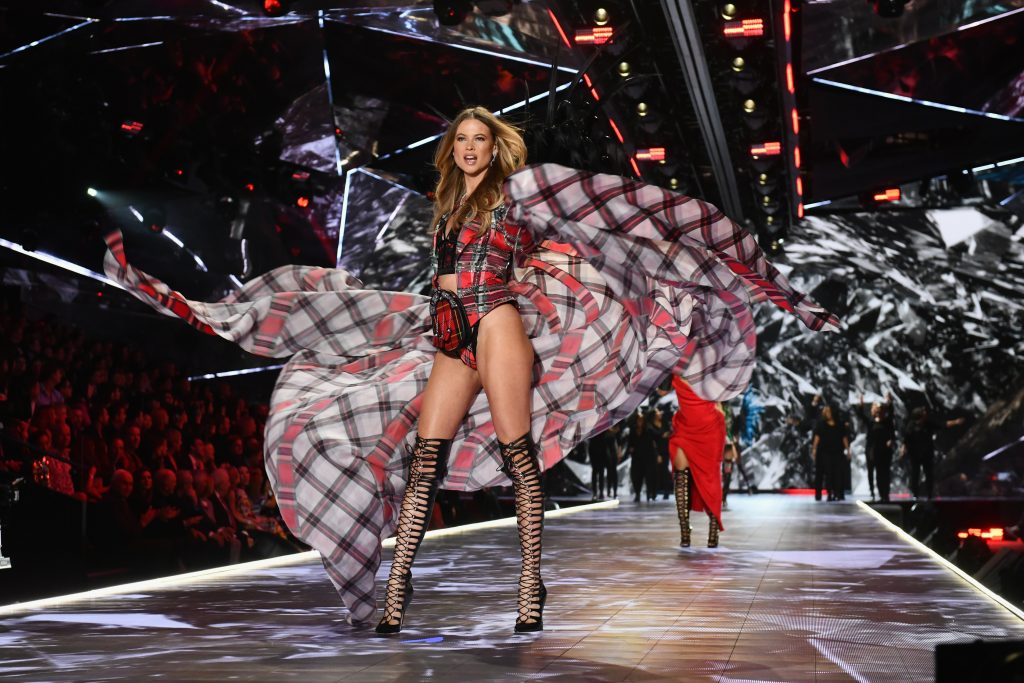 All the behind the scenes hair and beauty snaps from the 2018 Victoria’s Secret Fashion Show.