For centuries the perplexing relationship between art and war has long been ignored by historians – only now is it coming to light just how intertwined the two truly really are.

“Culture provides the ties that bind,” asserts Michael Danti, a Boston University archaeologist and academic director at ASOR Cultural Heritage Initiatives (ASOR CHI). “Without culture, we are not truly human.” With over 25 years experience directing archaeological programs in Syria, Iraq and Iran, Danti has authored numerous works about the destruction of cultural heritage in the Middle East. His organisation, ASOR CHI, strives to help Syrians and Iraqis in preserving and protecting the region’s cultural property. Roman, Greek, Babylonian and Assyrian sites dominate the artifact-riddled district, which has recently been ruthlessly demolished and devastated. The war in Syria has spearheaded especially epic damage, with an estimated 321,000 people killed since the uprising began in 2011, according to the Syrian Observatory for Human Rights.

Alongside the abominable human cost, numerous venerable cities including Homs (Syria’s third largest city) and Aleppo (which has emerged as a particularly bloody battleground in the uprising against current president Bashar al-Assad) have been swiftly reduced to rubble – this once esteemed country had six Unesco World Heritage Sites, all of which have either been obliterated or seriously ravaged. The majority of Syria’s glorious museums have also been barbarically plundered, with the fortuitous minority still at risk – take Maarat al-Numan’s Mosaic Museum in Idlib province, for instance; once filled with Roman-era artworks, it’s been gutted by a formidable flurry of army barrel bombs that were unapologetically dropped in 2015. 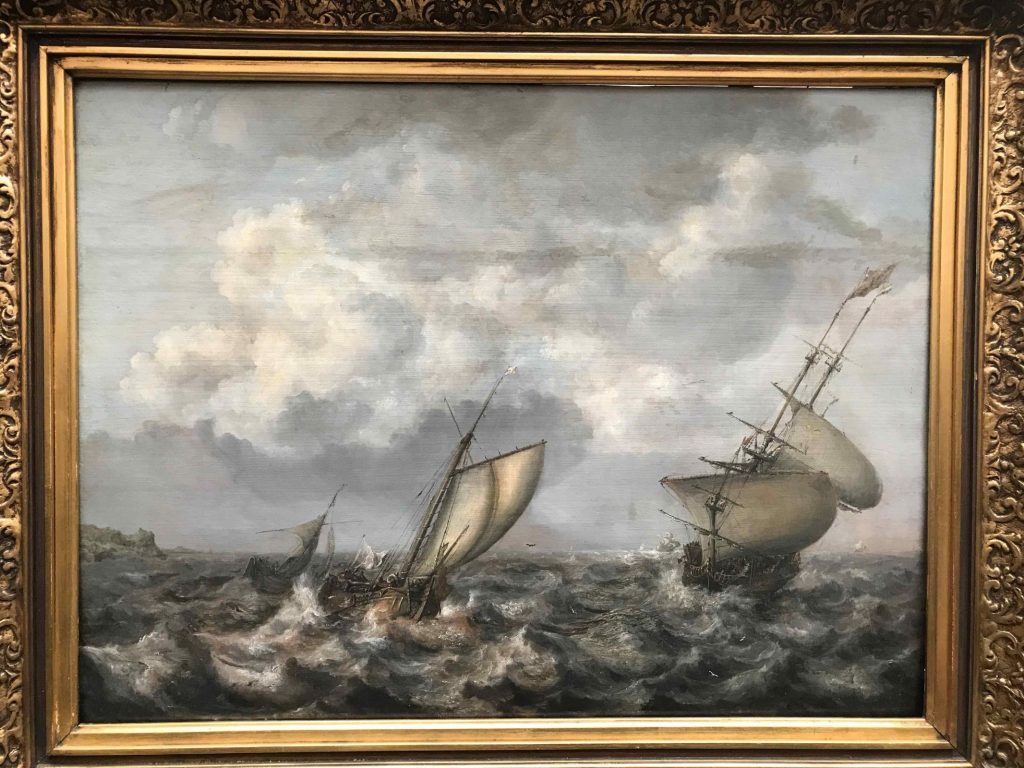 Entitled Ships in a Storm, by Simon de Vlieger, this dramatic creation was stolen during the Warsaw Uprising in 1944

Art theft and its shameless destruction during periods overshadowed by war is far from a new phenomenon, remarks Will Korner, manager of International Art Fairs at Art Loss Register. This private company boasts the world’s largest private database of stolen, missing and looted artwork, and attempts to uncover exceptional creations that are unaccounted for. “The history of stolen art goes back a long time and has almost always been involved in conflict,” he says in an interview with MOJEH. “You can even go way back, to the time of the Ancient Egyptians, and see how the pharaoh would fight his enemies before destroying their monuments.” Professor Mark V. Vlasic agrees: “For as long as we have had conflicts, the theft and destruction of cultural property has been deployed as a tactic of war,” he acknowledges in the World Economic Forum.

Professor Vlasic has served as a soldier, a lawyer, a prosecutor, and an American diplomat, having notably worked in the White House and the Pentagon, as well as the United Nations. His extensive knowledge and professional experience varies from international law and human rights to asset recovery. “Art is often a forgotten victim of wars,” he examines on behalf of Foreign Policy. “As the toll of human suffering builds, worrying about the fate of paintings, sculptures and antiquities might seem frivolous, even callous.” Although a widely held perspective, quick recapitulations of previous case studies suggest that antiquities represent far more than a person’s, or family’s, personal pleasures – together, artwork has the potential to define and maintain an entire society’s heritage and identity.

This inescapable link to a community’s culture and custom, says Danti, is why artwork has long been a victim of war. “The three major drivers of cultural property crimes during conflict are ideology, avarice, and violence,” he eagerly explains. “When we look to Iraq, Syria, and other conflict zones, we see belligerents destroying cultural heritage for supposed ideological reasons.” In Iraq, for example, satellite imagery has strongly indicated that there’s been widespread looting within prominent historical sites. A large section of the majestic city wall at Nineveh, for instance, dating back a breathtaking 2,700 years, has been viciously battered. 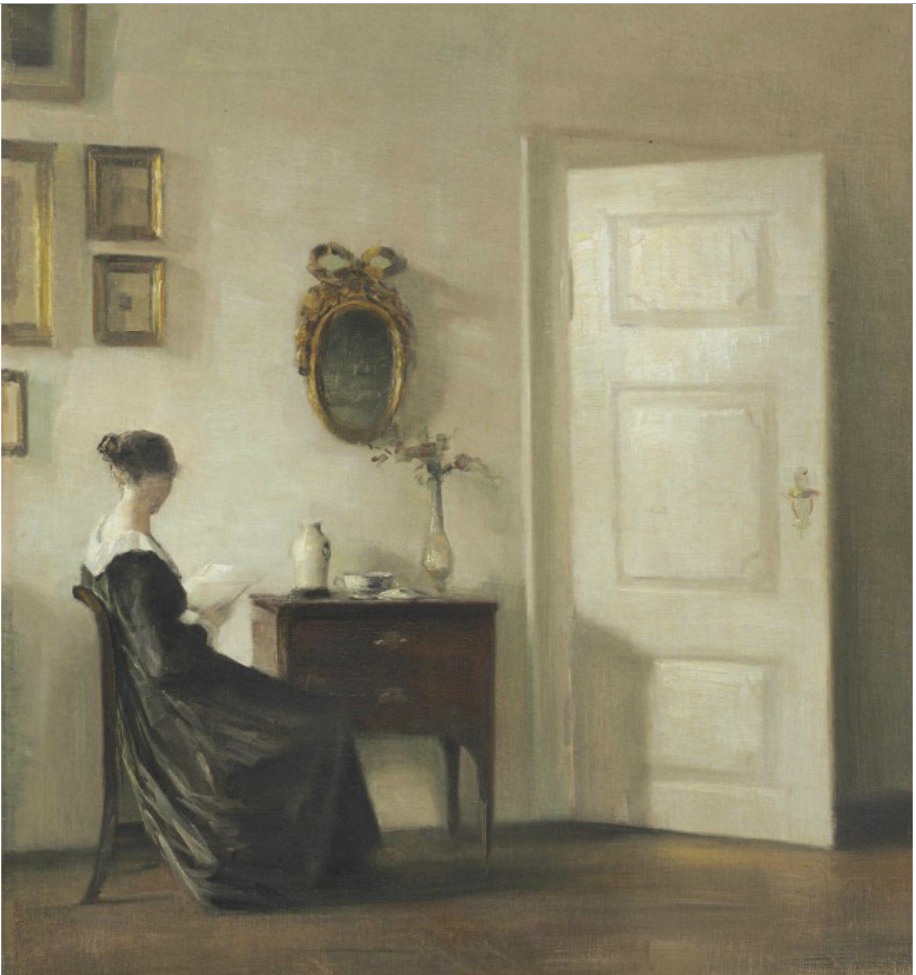 This painting by Danish artist Carl Holsøe was stolen along with seven other artworks in Sweden during December 2000.

For Danti, it’s about “the erasure of cultural memory, the manipulation of cultural identity, and cultural cleansing [of a society].” Although this is a long-practiced form of warfare, Korner adds that the more recent regional violence has emerged noticeably more aggressive mainly, in part, because of the newly reduced financial incentive amongst looters. “What’s going on in the Middle East is far more ideologically driven, which is why we’re seeing the destruction of objects more frequently,” he explains. “Nowadays sites, in particular, are more vulnerable to destruction because the ideological incentive is far more significant than the financial gain.” An interesting perspective considering that numerous news outlets have quoted multiple art historians who insist that antiquities smuggling, especially by the so-called Islamic State, has skyrocketed in recent years.

It’s also been widely reported by Western intelligence officials that art theft is now the militant group’s second-largest source of finance after the selling of oil (the organisation also frequently makes money from hostage ransoms and racketeering). “Portable cultural property is looted for personal gain or to fund terrorism and military activities,” insists Danti. Precious coins, he adds, are proving to be outstandingly desirable because of their convenient size, which makes them easier to hide and smuggle across country lines. “We (ASOR CHI) also see large numbers of sculptures, primarily from the Classical and Neo-Assyrian periods, as well as mosaics, bronze, terracotta figurines, and ceramic vessels.”

Christopher A. Marinello, founder of Art Recovery International, is one of the world’s foremost experts in recovering stolen artworks. “During conflict, security measures suffer as the populous prepares for war,” he educates. “Supporting funds cease, resources are redirected, and invading fighters steal and loot whatever they can get their hands on.” Be that as it may, it’s incorrect, contends Korner, to envision a vast network of sophisticated smugglers working together to bypass conventional middlemen within the Middle East. In actual fact, he argues, much of the regional looting currently undertaken is performed by civilians, and out of “sheer desperation”. Few risk scouring the battlefields for precious objects, and those that do either hide or bury them so they can be retrieved at a later, and safer, date.

“The term ‘systematic looting’, which has been used in the press a lot, is very misleading,” reveals Korner, “because it’s not systematic in that groups of people are sending out teams to find relics and left over treasure. There isn’t a system in place detailing how items are going to be sent across the border, or how they’ll be sold on the black market. It’s systematic only in that people take the opportunity. Art theft is always, or the vast majority at least, opportunistic.” However, in the United States alone, government data reports that the value of declared antiques imported from Syria jumped 134 per cent in 2013 to AED 40 million. In actual reality, the amount of illicit trade it simply impossible to accurately access, but an Iraqi intelligence official has claimed that the so-called Islamic State has made as much as AED 132 million from looting a single area around al-Nabek, a Syrian city once renowned for its exquisite wall mosaics. 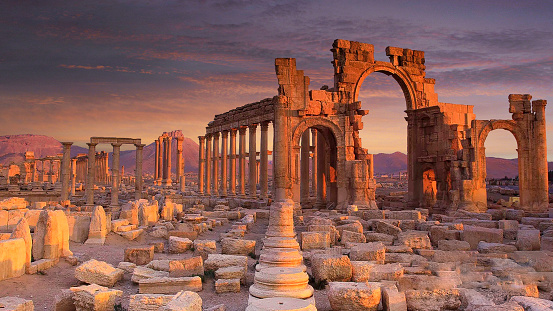 Looted treasures from the ancient city of Palmyra in Syria, pictured, which was captured by the so-called Islamic State

Meanwhile, The Wall Street Journal reported reviewing mobile phone footage of a stolen Bronze Age votive bust, which was possibly a jaw-dropping 5,000 years old. It was being touted for sale to unnamed private clients, and supposedly sold for around AED 110,000. “If governments and industry leaders decide to work together, they are in a position to limit the value of such blood antiquities, and thus limit the terrorist financing going to ISIS,” argues Professor Vlasic. “In doing so, they will help preserve the cultural heritage that binds us all, which some day, will serve as a common bond that can help bring warring parties together to find peace.”

Unfortunately history’s not on his side; Adolf Hitler, for instance, pulled off one of the greatest art thefts in history during the Second World War – an estimated 650,000 precious artworks were looted from Europe by the Nazis, many of which have never been recovered. “Less than 15 per cent of stolen and looted artworks are recovered,” reminds Marinello. It was Hitler’s ambition to build, what he considered, the finest museum in his hometown of Linz, Austria, which he had planned to call the Führermuseum. Many of these artworks were stolen by Jewish citizens: “Given that a lot of these families were some of the wealthiest families in Europe, these artworks include incredible pieces of paintings, sculptures, furniture, jewellery and watches,” says Korner.

In 2013, German authorities found a treasure trove of 1,280 paintings and prints worth more than a billion dollars in the Munich apartment of a white-haired recluse. When police and tax officials finally entered the elderly man’s 1,076-square-foot apartment, they found an astonishing collection of stolen creations by the likes of Picasso, Matisse, Renoir, Chagall, Max Libermann and Otto Dix.

“The assault on culture, the fabric of our lives, fuels resentment, insecurity, alienation, and poverty, which in turn foment instability and conflict. We are struggling to break this escalating cycle,” says Danti, but this hasn’t deterred ASOR CHI’s art recovery agents on the ground, who scavenge combar-scarred frontiers in the ongoing battle for their country’s cultural heritage. Our brave Syrian, Iraqi and Libyan colleagues in the field face the risks on a daily basis,” explains Danti. “They are the heroes. Most ASOR CHI personnel work outside the conflict zone to support these in-country efforts. The obstacles that we face are numerous. They can be as mundane as delays in providing support caused by bureaucratic red tape to terrifying ordeals in which our Iraqi and Syrian friends and colleagues are injured or killed.”

ART IN A DIGITAL AGE