You can get a good idea of the values a society prizes by observing its public art. From the iconic Statue of Liberty to ephemeral installations created for temporary communities like Burning Man; and the magnificent bronze Marcus Aurelius mounted upon his steed in Rome, the art facing outwards gives a powerful glimpse into the psyche of a community at a given moment in time.

Unique in that its natural intention is to be accessible to all, public art brings together aesthetic beauty, and cultural interpretation and inspiration whilst uplifting urban landscapes. It can look down at you from a 30-metre plinth or divert your gaze to the street beneath your feet. It comes in realistic, abstract and digital forms which could be sculpted, painted, site-specific or juxtaposed against surroundings. 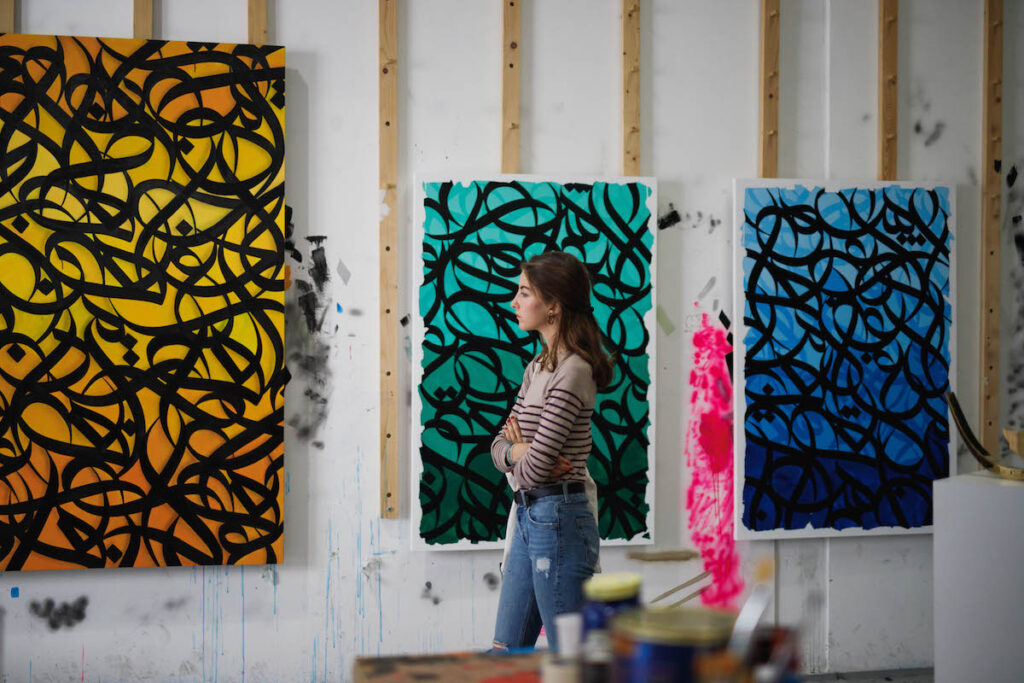 What about the public art in the Middle East? The visual triumphs of the West are well documented, yet the region’s rich and far-reaching relationship with art has been arguably less celebrated. Its past cuts across politics and grand plans for urbanisation, and carries with it tales of cross-cultural exchange. But the Middle Eastern art-makers of today are shaping the way communities interact and reframing the topics that concern them for a global audience.

Art’s history was once understood via distinct regions, but increasingly it’s viewed as borderless, a new way of thinking that helps us to connect the dots and appreciate that the Middle East has long been trading aesthetics with its neighbours in Europe and Asia.

The sculptural influence of Henry Moore and Jean Arp is echoed in the output of Lebanese sculptor Alfred Basbous, but it was the wave of European post-war art, exhibited in social spaces that had a greater impact upon his legacy.

“Alfred came back to Lebanon in the 60s inspired by studies in Paris and interactions with the likes of Henry Moore in England. This exposed him to the immense value and potential of public sculpture,” explains Fadi Basbous, President of the Alfred Basbous Foundation. 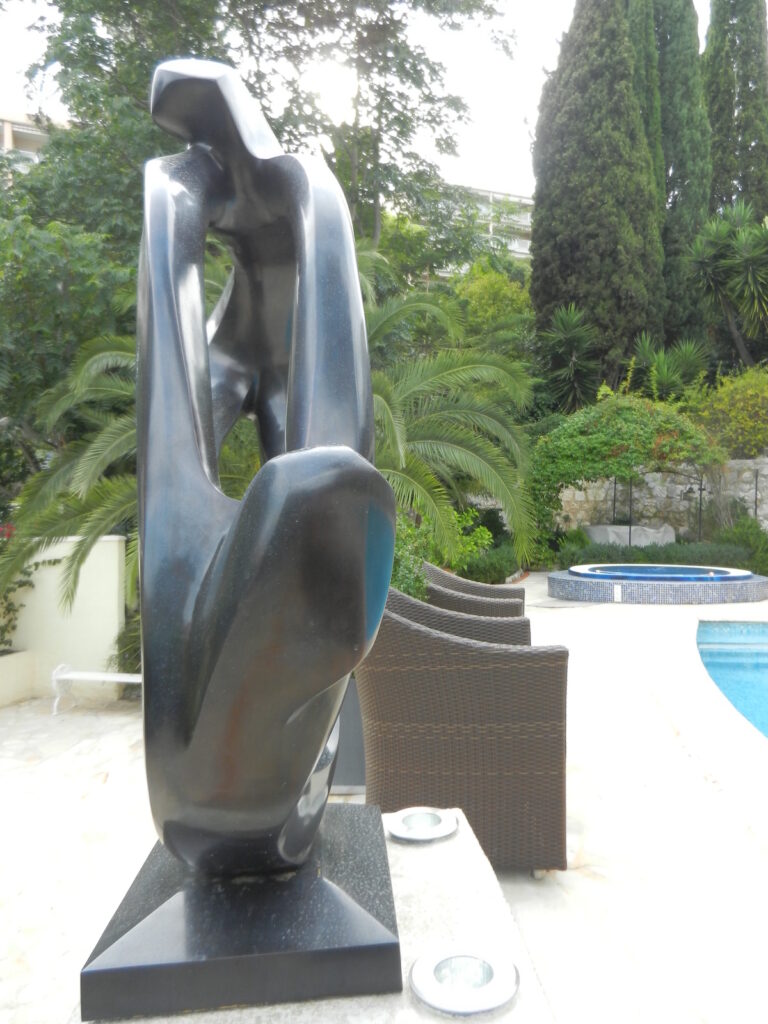 Alfred Basbous’s Acrobat Ville Franche in Rachana, Lebanon, his home village which he turned into an open air museum

The artist’s plans were unprecedented, he wanted to transform Rachana, his native village, into an open-air museum where he would exhibit his work for the public to openly engage with. A pioneer, Alfred made a name for himself as one of Lebanon’s most celebrated modern artists, sculpting fluid forms that focused upon the principles of line, harmony, and movement.

As well as sculpting with traditional marble and bronze, the artist also injected a local element into his work using testa, a Lebanese limestone. Breaking new ground and breathing life into the visual landscape of his sleepy village, the 90s and 2000s saw Alfred ll Rachana’s streets and squares with the works of internationally respected sculptors. The open-air museum, which remains a sacred space for the local community also played a pivotal role in stimulating tourism and in 1997 was recognised as a UNESCO site.

Looking to the Gulf, during the 1970s, the Mayor of Jeddah, Mohamed Said Farsi, began an equally ambitious feat, the ‘Jeddah Beautification Project’. The urban development scheme held public art at its core and saw the city amass a diverse collection of over 400 sculptures by seminal artists including Joan Miró and the surrealist, Alexander Calder.

Styles ranged from abstract and monumental to traditional Arabic, a fascinating array that coincided with a period of rapid urban expansion and the nal years of the Modern Art Masters. By the early 2000s, the arid local climate had caused the sculptures to display signs of deterioration, so in 2011 Art Jameel and the Jeddah Municipality collaborated on a restoration project that not only preserved the condition of the collection but also saw 20 of the sculptures exhibited anew in the open-air Jeddah Sculpture Museum, which opened in 2013. 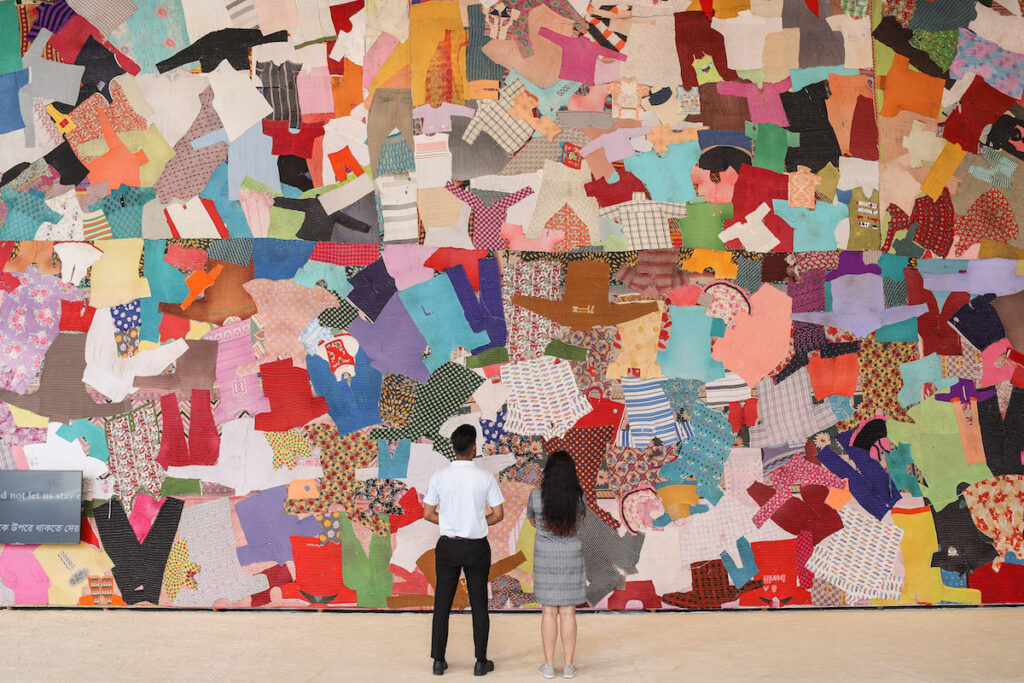 Visitors regard the works on display during Social Saturdays at Alserkal Avenue, one of the many free events hosted at the Al Quoz art space

As the Jeddah community make their way across the site, which straddles seven kilometres of corniche, they might gaze up at the imposing excellence of The Eye, by César Baldaccini or take a moment to appreciate the calming calligraphic curves of The Verse Boat, by Julio Lafuente.

As with any visual art form, tradition and history remain at the roots, but public art is forever evolving in line with the societies it populates. The UAE, a country in its infancy that’s constantly redefining itself, is testament to this. Its notions of public art were once resigned to decorative sculptures that adorned the foyers of upscale hotels, but in recent years its art scene has been exploding.

Anyone passing through Al Satwa in Dubai will notice the large-scale murals that form part of Dubai Street Museum, a public art initiative announced by Sheikh Mohammed bin Rashid, UAE Vice President and Ruler of Dubai, in 2016. The project will see 12 local and international artists including Case Maclaim, Julien Malland, and Julia Volchkova, regenerate the city’s walls with visually striking pieces that recount the country’s heritage.

It’s art that draws the inquisitive eye out of its typical stomping ground and encourages the diverse communities of Dubai to intermix. “Public art like this is essentially inclusive,” says Zareen Khan, Cultural Director and honorary board member at Dubai International Art Centre. 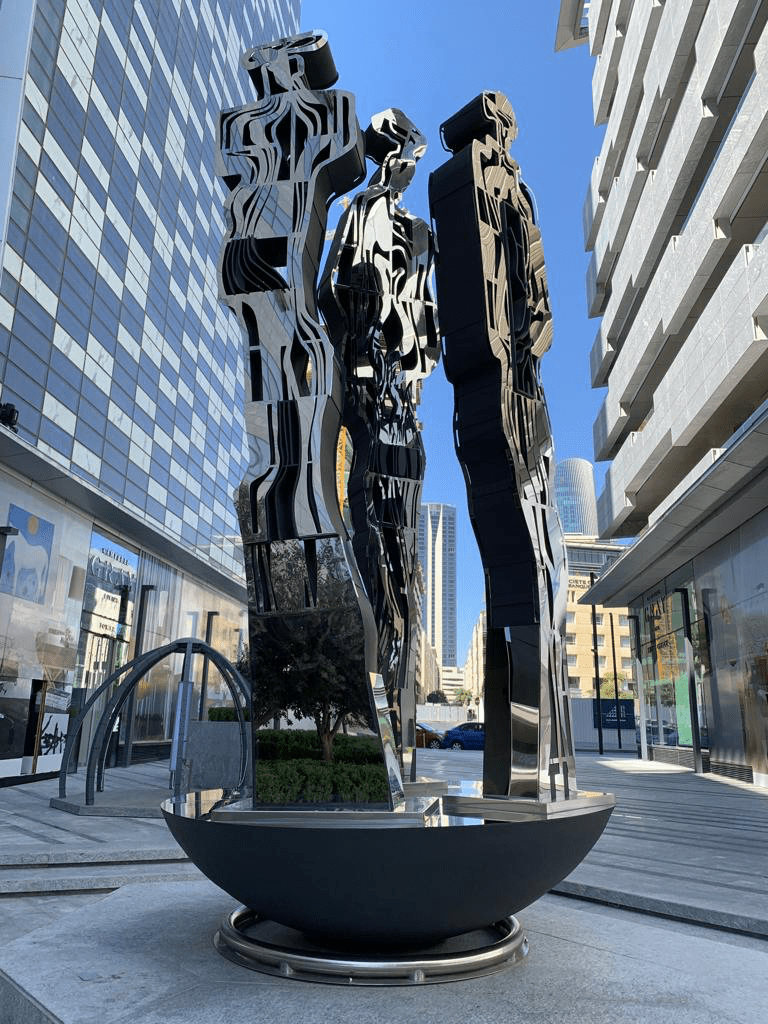 Artist Zivo’s piece, Reflection, in Amman promotes “unity and family values” via a public art installation in the Middle East

“It’s not bound by the walls of a hotel or a gallery, it’s out there and available to appreciate every day. It communicates directly with you and is instrumental for any city’s landscape. Just like the monuments and landmarks that we identify with a city’s DNA, the walls of that city speak volumes about its current generation of creators, their values and cultural makeup. Street art in every city intertwines in the fabric of that place’s lifestyle and shares stories that are pertinent to its identity.”

“The piece promotes unity, family values and the importance of staying together through tough times,” says Saad Audeh, Chairman of Campbell Gray Hotels. “I hope it will inspire people and, in some small way, bring about a brighter future.”

Back in Dubai, Emaar Boulevard pays homage to the unique discourse of the Emirates, solidifying the city’s unwavering optimism and connection to other cultures in sculptures like The Wings of Mexico by Jorge Marin, and the chic, contemporary City Walk is distinguishable by its street art. 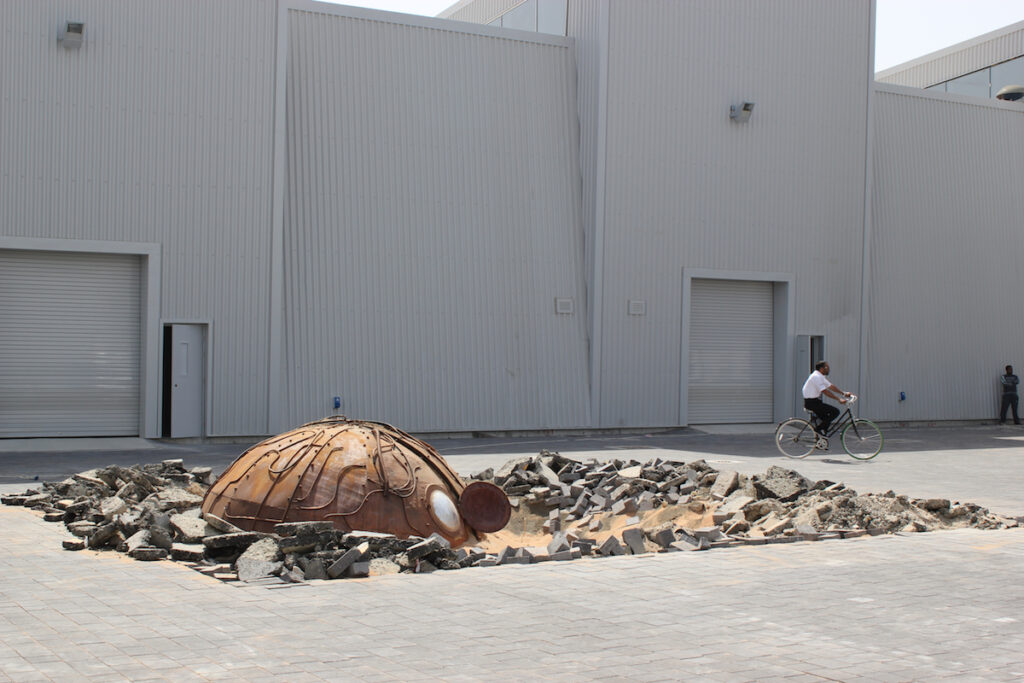 The Dubai Walls initiative gathered 15 of the world’s most celebrated street artists and let them loose on the walls of the community, ranging from the bold brilliance of provocateur, D*Face to the delightful stencils of Blek Le Rat.

Thanks to its constant state of influx, Dubai is in a unique position to move fluidly with art, keeping pace as our modes of expression and technological capabilities improve. “The face of public art is changing — it’s multi- dimensional, and often, multi-disciplinary — and manifests in different forms,” says Vilma Jurkute, the Director of Alserkal.

“Our public art commissions were launched in March 2015 with Mehreen Murtaza’s Deep Earth Object. The artist created an intervention in The Yard, an uncanny spherical sculpture that appeared as though it has emerged from the earth, and was developed from the artist’s research into UFO sightings in Dubai, as well as materials and metals used in Al Quoz and the scrap industry in the UAE. The work addressed questions related to forging histories, utopias, and the lurking entropy of our chemical existence. Today, Mehreen’s ‘meteor’ is buried in The Yard (Alserkal Avenue’s public square),” she continues.

Alserkal has been heavily engaged with driving a cultural shift, and one of the key pillars of its non-profit arm, the Alserkal Arts Foundation, is public art commissions, which critically and creatively investigate themes pertinent to the region’s arts community. 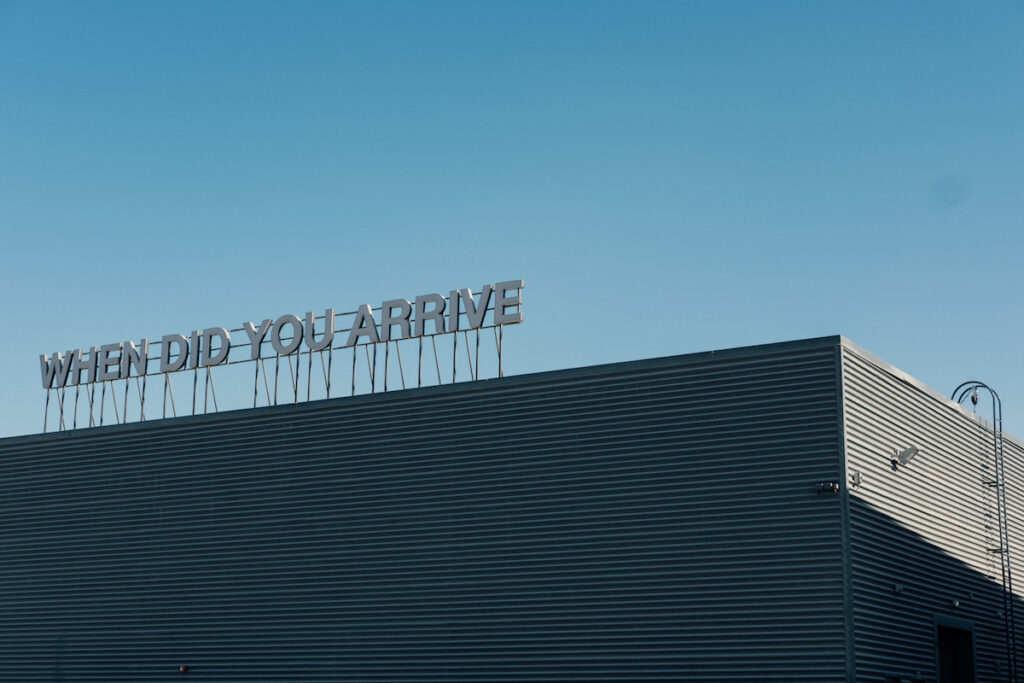 To date it’s commissioned 19 regional talents including Farah Al Qasimi, Hazem Harb, and Chris Weaver. An unmissable example is the two LED signs that welcome visitors into the Avenue. The words ‘When did you arrive’ and ‘When will you return’ illuminate the skyline and are part of The Circle Game, an artwork created by New York-based Mary Ellen Carroll.

“We commissioned the artist to create this work in 2016, and through it, Mary Ellen invites the public to interrogate the history, present, and future of Dubai,” says Vilma. When the commission was unveiled during Art Week at Alserkal Avenue in 2016, Mary Ellen set up a 15-metre high tower in The Yard, offering visitors a new vantage point and a view across the low-lying industrial buildings of Al Quoz towards ‘old’ Dubai, and further towards Deira, the original city centre.

The elevated platform connected two parts of the city and served as a space for public programming and talks, which opened up a dialogue with Dubai and its citizens. “It was meant to be an ephemeral work that became permanent, as the community fell in love with the work and could not imagine Alserkal Avenue without it,” she continues.

Situation is a primary consideration for public art, accounting for not only who sees the work but also unleashing the potential of a particular location. In the Cairo neighbourhood of Manshiyat Naser the Coptic community of Zaraeeb has collected the litter of the city for decades and, as a result, has developed the most advanced and profitable recycling system that’s recognised on a global level.Despite this triumph, the locale is perceived to be dirty and remains socially marginalised. 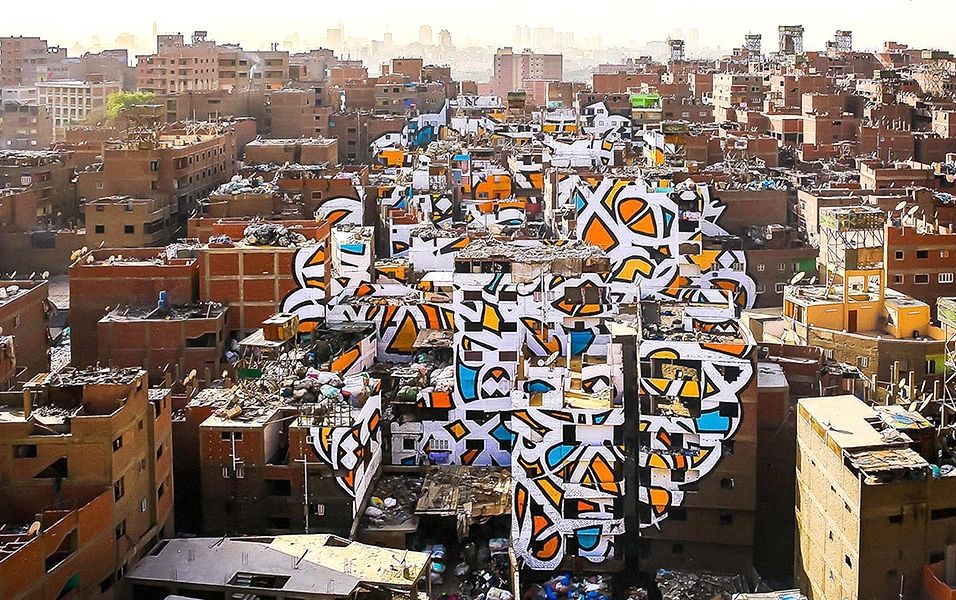 In a move to challenge perspectives and shine a positive light on the community, French- Tunisian calligraphy artist, eL Seed created Perception, a monumental anamorphic piece completed in 2016. Spanning almost 50 buildings, the work is only visible from a specific point on the Mokattam Mountain, and sees the words of Saint Athanasius of Alexandria, a Coptic Bishop from the 3rd century, jut boldly from the walls to challenge social perceptions – “Anyone who wants to see the sunlight clearly needs to wipe his eye first,” he stated.

A tool to cultivate community pride or challenge the status quo, the likes of eL Seed find their way into spaces where art can shake up mindsets, while the Rachana Sculpture Museum reveals public art’s ability to turn international attentions towards an unassuming village. Street art in new cities like Dubai connects communities and stimulates curiosity, and in time, may encourage a new breed of tourist that journeys especially to experience this new strain of city-wide public art.

Both interest and scale of work continue to expand in the Middle East as those beyond the creative sphere, from policy-makers to real estate developers, wake up to its universal and intangible benefits. It’s an exciting space to admire as the artists, sharing a privileged mode of communication with the public, add meaning to social spaces and draw out their collective memory.