ART IN A DIGITAL AGE

Technology and art have long entertained an arduous relationship. Art and its traditionally shrouded circles was known for placing much importance upon artisanal techniques, remaining decidedly reluctant to take on technological advancements in order to both create and disseminate.

And in parallel, tech-enthusiasts have been notably fearful of art’s fanciful influence. If we look back to the 1800s and the innovation of the camera, for example, the artists of that era rebuked photography as an art form yet today it’s one of our most celebrated. In recent years we’ve seen technology open up new windows across diverse sectors at an unexpected rate. During 2017 alone self-driving vehicles, face-detection payment systems and the realisation of usable quantum computers have been announced.Technology has made its dent upon our business, medical, and banking systems but now it’s turning its gaze towards the arts to compelling avail.

The advent of augmented reality (AR) is one such breakthrough that recently received an artistic makeover via Snapchat’s collaboration with cult American artist Jeff Koons. Koons, who is widely known for reimagining everyday objects – like a simple balloon animal – into iconic works of art, is seemingly a perfect fit for this role, his brilliantly coloured sculptures, cast in stainless steel reflect their surroundings, affording ordinary objects with new meaning. One of the most prolific artists of our time, his works have undeniable and enduring mass appeal. Using AR, Koons built lenses for Snapchat, displaying some of his most famous sculptures such as the Balloon Dog, Rabbit, and Play-doh in tourist hotspots across the globe.

The union of Koons and Snapchat attracted much media attention and propelled the potential of AR into the minds of the masses but this type of collaboration is just a small piece of the art-tech pie. The Massachusetts Institute of Technology, for example is a pioneer in cultivating a healthy relationship between technology and the arts via education, research and resources, its Center for Arts, Science, and Technology (CAST) has been a declaration of their commitment and longstanding interest in fostering a healthy cross-disciplinary environment since 1967. Seven on Seven, a flagship programme by nonprofit, organisation, Rhizome, is another example. It pairs seven artists with seven technologists and challenges them to develop something new in a 24-hour window. First founded in Berlin in 1996 by acclaimed artist Mark Tribe, Rhizome has played a pivotal role in conveying the positive message of art engaged with tech to wider audiences. Previous partnerships have included Tumblr’s David Karp and renowned new media artist Ryan Trecartin.

“When any new technology enters into the arena it goes through a puberty of sorts,” explains Pavlacky. “Now, in this day and age, where new tools are being developed, shared and improved rapidly, the pace of change is accelerated but the idea is the same. It’s hard to distinguish when projects using AR and VR (virtual reality) are merely an exploration of the medium, and when it transcends into the arena of fine art,” he continues. Is it possible to fuse both mediums in a way that preserves creative integrity and brings about fresh methods for art making? Those in the industry believe so. “Art and technology are strongly linked today. It doesn’t mean an artist cannot use classical tools but for sure he cannot ignore technology and its new ways to create,” says Pascal Haudressy, a Parisian artist who pioneered a new image format, focussing on movement and often zoning-in upon nature. 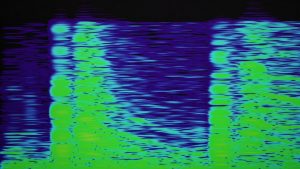 Abu Hamdan’s Earshot, is an installation using sound and video to investigate the killing of two Palestinian teenagers

“I use technology and science to create new materials and new pictorial and sculptural postures that relate to our era,” he continues. Technology has also been instrumental in disseminating art’s social and political commentary. Lawrence Abu Hamdan is a Beirut-based contemporary artist whose work is at the meeting point between audio-installations and human rights. His recent body of work analyses sounds coming from prisons in Syria to explore violations of human rights law. “For me, art is a place to experiment with different ways of seeing and hearing the world,” he says. “Sometimes, that can have interesting social and political resonances and in this respect art is important because it’s one of the last places where these things can still be experimented with. Everything can still be questioned and new propositions can be made in art that you can’t really make in the ‘real world’. The current vision surrounding technology is quite limited and I think art offers a place to examine new technological pathways.”

Assessing technology’s potential for detrimental impact upon art’s traditions, this year, at Art Dubai, our ambient fear of automation becomes the topic in question for the Global Art Forum. Entitled “I Am Not a Robot”, the forum will focus on the power, paranoia and potentials of automation and examine how automation will run through our lives today and tomorrow: from machine learning, to algorithmic policy-making, social credit scores and gene editing. It’s said that automation, more than any other factor, will fundamentally alter our working lives. “The forum takes the cultural temperature of our times,” says Shumon Basar, commissioner of the Global Art Forum in Dubai.

“The question of automation – and whether it will improve or ruin our lives – is one of the biggest questions facing the world today and tomorrow. So, I felt like we must tackle this now.” Opening up a minefield of unavoidable questions surrounding privacy and identity, as well as job security, even Koons’s collaboration, a seemingly harmless experiment with public engagement, evoked resistance. In what appears to be the first case of AR vandalism, graffiti artist Sebastian Errazuriz defaced a version of Koons’s Balloon Dog and placed it in the same geotagged location in Central Park. “It all seems fun, but I believe it is imperative we start questioning how much of our virtual public space we are willing to give to companies,” wrote Errazuriz on his Instagram account. “Should corporations be allowed to place whatever content they choose over our digital public space?”

It has been said that technology will ultimately make art more accessible and Sotheby’s and Christie’s have both recognised that online culture cannot be ignored if they wish to remain relevant. In 2014, 270-year-old auction house, Sotheby’s New York, live-streamed a selection of their auctions on a dedicated section of eBay’s site, sharing the collection previously only available to a privileged few with eBay’s 145 million customers. “Online platforms reduce the lag between interactions. Limiting factors such as real estate, storage and travel disappear. This expedites the making of connections between artists, the sharing of ideas, and contact with supporters of the work,” explains Josh Pavlacky, one of the founders of American Medium, a multimedia exhibition platform working with contemporary artists. “They [online platforms] can make work accessible to everyone who has unencumbered internet access, but there are still native barriers to access,” he points out. “It’s naïve to think of the internet as free and open. The internet has clearly made it easier for cross-pollination between cultures and disciplines, but in an era of ‘fake news’, censorship, short attention spans, and speculation, there comes a whole new set of challenges to creating, viewing and interpreting art via the internet.”

In what appears be the first example of augmented reality vandalism, Errazuriz defaced Koons’s Balloon Dog

Spawning from a conversation that candidly took place at an arts conference in Delhi, Shohidul Ahad-Choudhury was asked if there was an app that artists, collectors, gallerists, and enthusiasts could use to share work and appreciate art in one place. At that time the answer was ‘no’, but this need rapidly became a reality. 18 months after the initial conversation took place, ArteVue, Ahad-Choudhury’s philanthropic project, was launched; the free app is designed to re-calibrate connectivity between enthusiasts, artists, collectors, galleries and sector professionals. Offering a clean and simple interface not too dissimilar to that of Instagram minus the influx of irrelevant content, ArteVue takes the rigid norms typically associated with the art scene and breaks them down, presenting an all- encompassing and efficient eco-system from which those passionate and invested in the scene can interact, share content, discover new works, curate, and initiate sales. In its infancy ArteVue has already attracted 15,000 global followers, and is growing exponentially week-by-week. 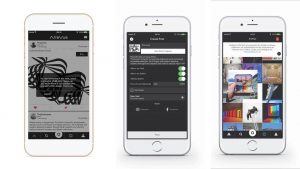 Nourishing emerging talent, ArteVue launched with an annual prize for artists whose practice revolves around technology

“ArteVue is about democratising art,” says Ahad-Choudhury. “There’s so many barriers in the art world. Even I, as a collector and enthusiast, don’t like going to galleries and walking around, because it’s intimidating. Art is about escapism, if you can’t go into a gallery and escape because you feel hindered by the fact you don’t know about that particular work or feel put off by the fact it costs a million dollars then why is it art?”

Until recently the art cycle remained notoriously resistant to the digital revolution, shrouded in secrecy, exclusivity and selective in its inhabitants, but applications like ArteVue are set to dislodge this status quo. In the past art was produced by hand and sold in person, a model that endured for centuries, but now these norms have been shattered and redefined. Artists, admirers and industry professionals are more connected than ever before, while the rules of art’s rigid ecosystems and class barriers are being reconsidered. The hybrid between art and tech is one of the most dynamic areas to be involved with right now but its definition remains up for grabs as galleries, collectors, auction houses, educational institutions, and tech startups all investigate technology’s role in the art world, assessing what this convergence can offer our ever-digital lifestyles. One thing art is uniquely able to do is take science and technology out of the laboratory framework and place them into a language that people can connect with on an emotional level.