After a decade of construction and a build cost of around $400 million, the vast King Abdulaziz Center for World Culture, otherwise known as the Ithra museum, protrudes from its desert surroundings as if it has crash-landed from the future – and in a way, it has.

Located in Saudi Arabia’s eastern province of Dharan, the sinuous, glinting metal structure is not only the first museum of its kind in the kingdom, but is also rather unique in the world. A combination of research centre, incubator, library, education space and art hub, Ithra could perhaps be compared to New York’s New Museum or the whole of Dubai’s d3 Design District squeezed into one building.

The location is a little off the beaten track—while arts and culture hubs are well-founded in Jeddah and Riyadh, the scene in sleepy coast town Dhahran is pretty minimal. But, the museum’s funder, Saudi Aramco, the huge oil and gas producer and the world’s most profitable company, is based in Dhahran. 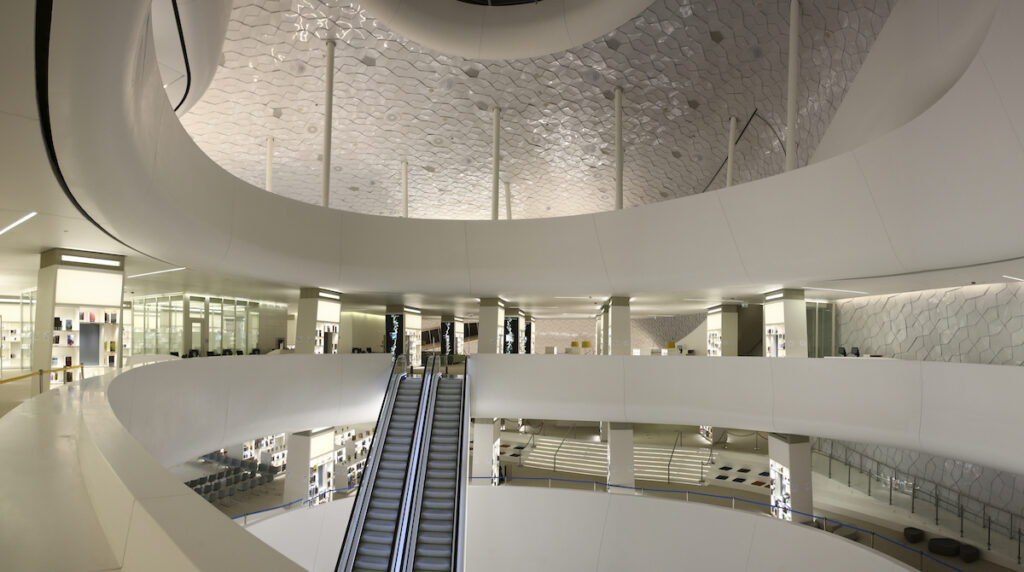 They launched Ithra back in 2008, to mark their 75th anniversary, with the idea to “empower human development” and to “give back to the kingdom.” The initiative is part of the increasing realisation that oil won’t last forever and that Saudi Arabia needs to diversify its economy, which is the key point of the country’s Vision 2030.

“Our aspiration is to play a leading role in establishing the kingdom as a hub and as a platform for creativity on the local, regional and global stage,” says the centre’s Head of Learning, Abdullah Alrashid.

Everything about Ithra’s design hides a symbolic meaning. First, the site was chosen because it is close to the Prosperity Well (Saudi Arabia’s first commercial oil well) and is meant to represent the transition from that old source to a “new source of energy” – human energy. 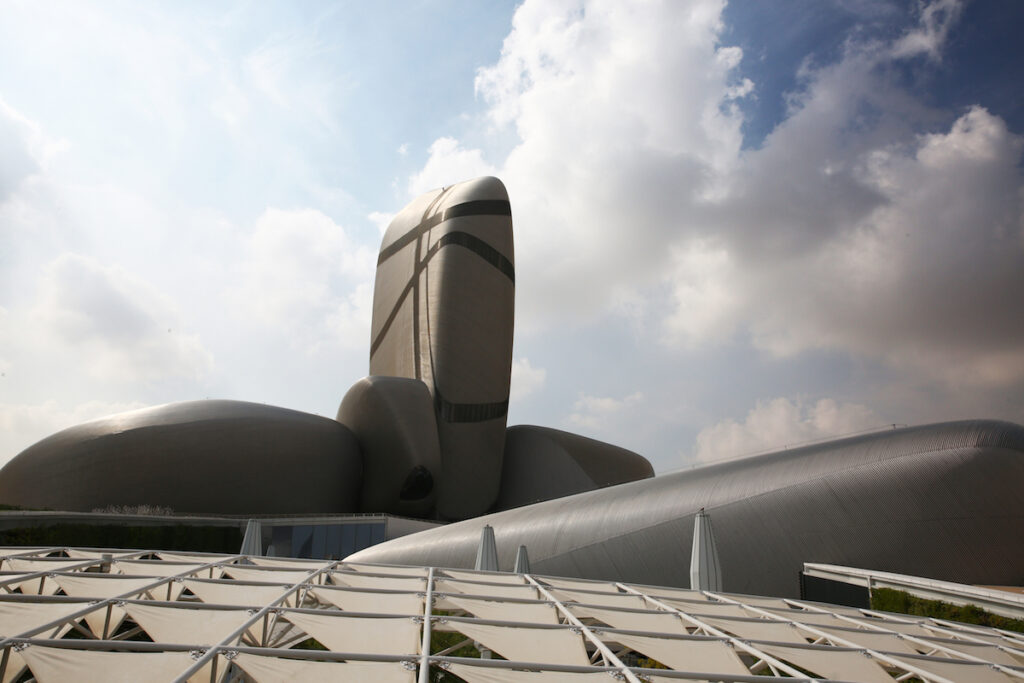 The rock-shaped building rises into the desert sky

The building itself is meant to be shaped like the stones that hold oil reserves and these “rocks” look as though they are leaning on one another, symbolising the need to work together. The outer coating that gives the museum its silver sheen is a façade of individually formed stainless steel tubes that resemble the kinds of pipes that draw oil from the earth.

The museum also meets LEED standards (Leadership in Energy and Environmental Design), which means it uses low energy and takes a sustainable approach, despite being situated in the scorching heat of the desert. 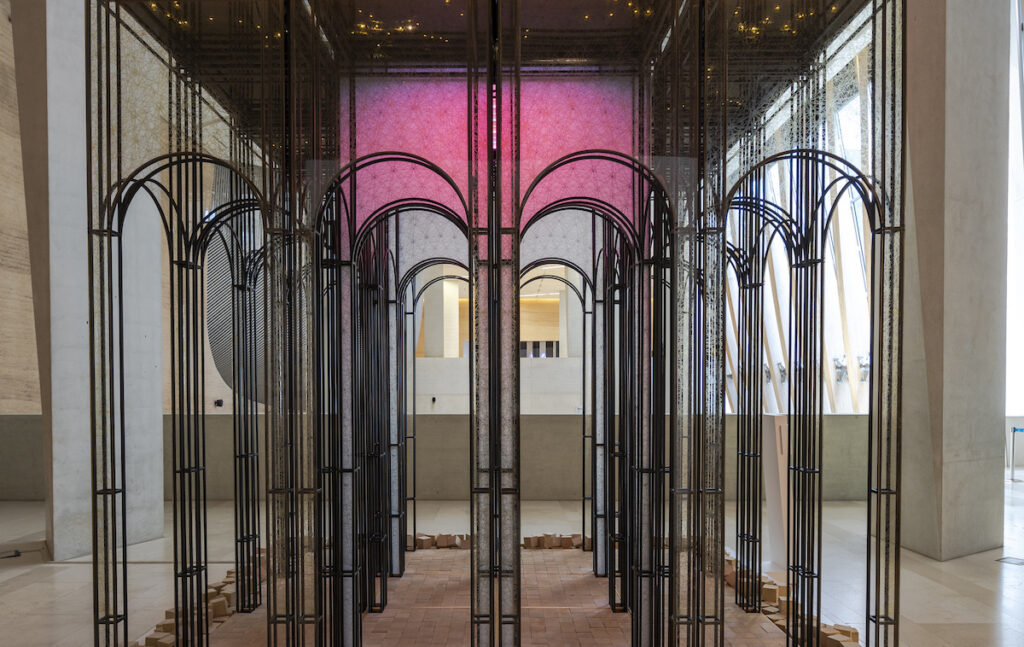 People were sceptical that a museum in Saudi would show Modern and contemporary art, assuming the country to be too conservative for potentially avant garde works. But the vast building has four exhibition galleries that have a range of displays from ancient Islamic objects to cutting-edge contemporary pieces.

The Funoon gallery, which is dedicated to contemporary works, is small but tightly edited collection by the museum’s curator and public programs coordinator, Candida Pestana. The first show she put together was Wasl: Beyond the Pen, in 2018, which looked at art inspired by Arabic script and calligraphy. 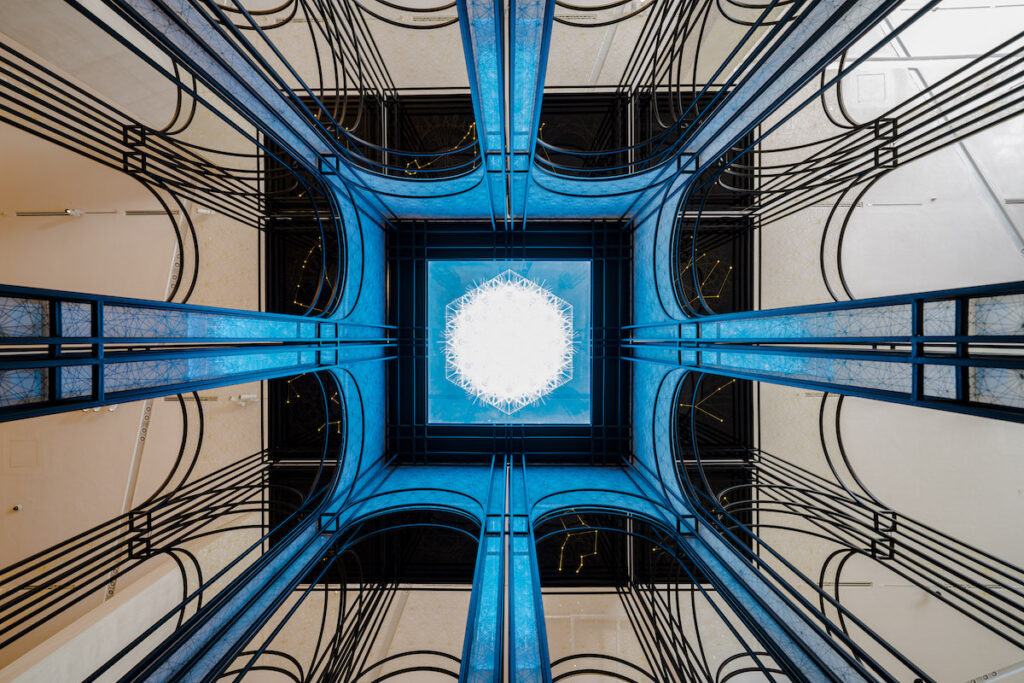 Contemporary works from 11 Saudi artists are on display in Zamakan

The current exhibition, Zamakan, shows how 11 Saudi and Saudi-based artists approach the theme of time and place, and includes brilliant artists such as Dana Awartani, Sara Abdu and Omar Abduljawad  – his installation Thuluth [2018] a standout work in the show.

Excitingly, Pestana and her team are working on creating an impressive, permanent contemporary collection for Ithra. Many of the works on show in Zamakan are commissions or recent acquisitions: from Zahrah Al-Ghamdi’s circular sculpture What Lies Behind the Sun (2019) to Maha Malluh’s monumental Oil Candies installation (2019).

The Zamakan gallery’s next exhibition, opening this November, will be a photography-focused show about the Middle East, including both Saudi and international artists. 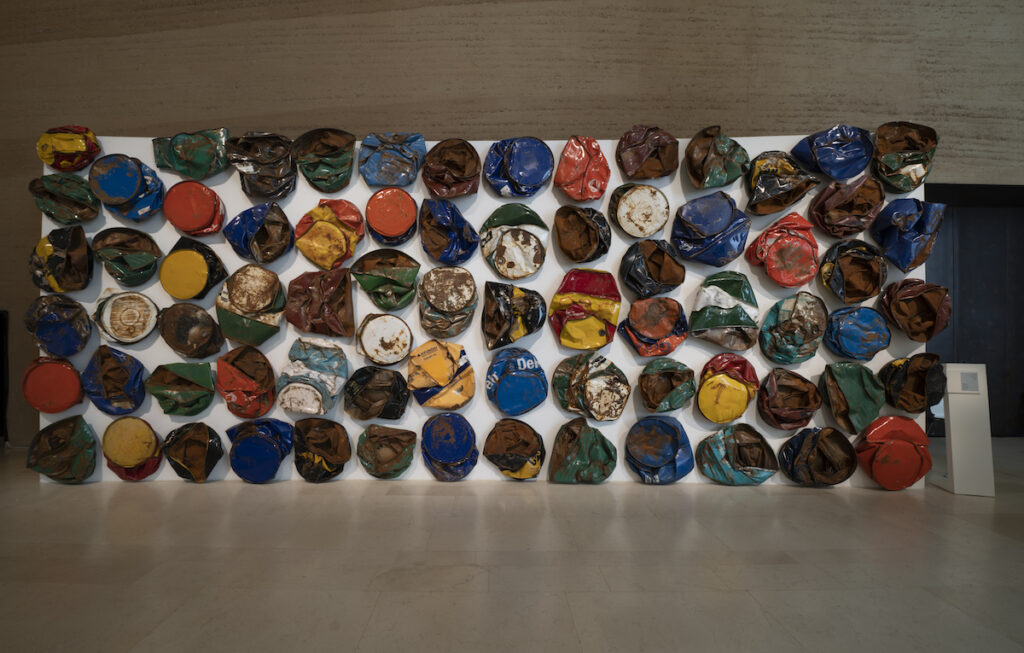 Downstairs, the museum houses an exceptional loan exhibition of Islamic objects from the Los Angeles County Museum of Art (LACMA) called Beauty and Identity. The dramatically lit, state-of-the-art gallery includes around 130 objects, including artefacts from Mughal India and Moorish Spain.

The jewel in the crown of the display is an entire 18th-century reception room taken from Damascus, which boasts lavish decoration. 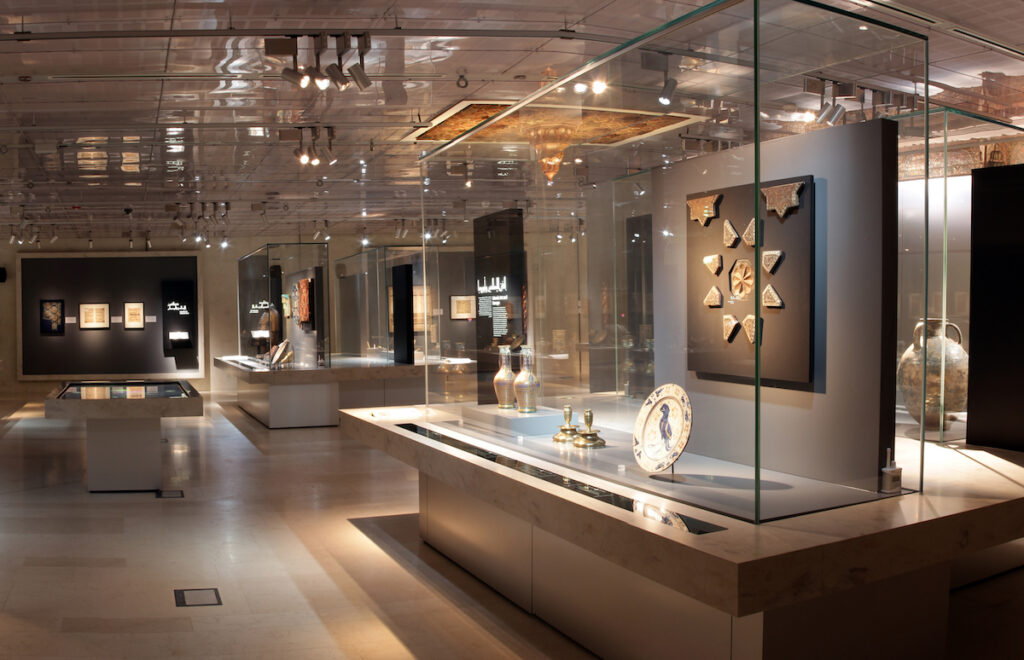 On loan from LACMA, the Beauty and Identity exhibition features over 130 rare and exceptional Islamic objects

The most dazzling space in the whole building, however, is the Great Hall. The 1,600 square metre room has a perforated vaulted ceiling to let in dappled light, creating a similar feel to the Louvre Abu Dhabi’s dome, and is coated in copper.

This unique space has been designed to host travelling or loaned exhibitions, and has so far displayed works of master artists including Leonardo da Vinci, Vincent van Gogh and, most recently, Edvard Munch. 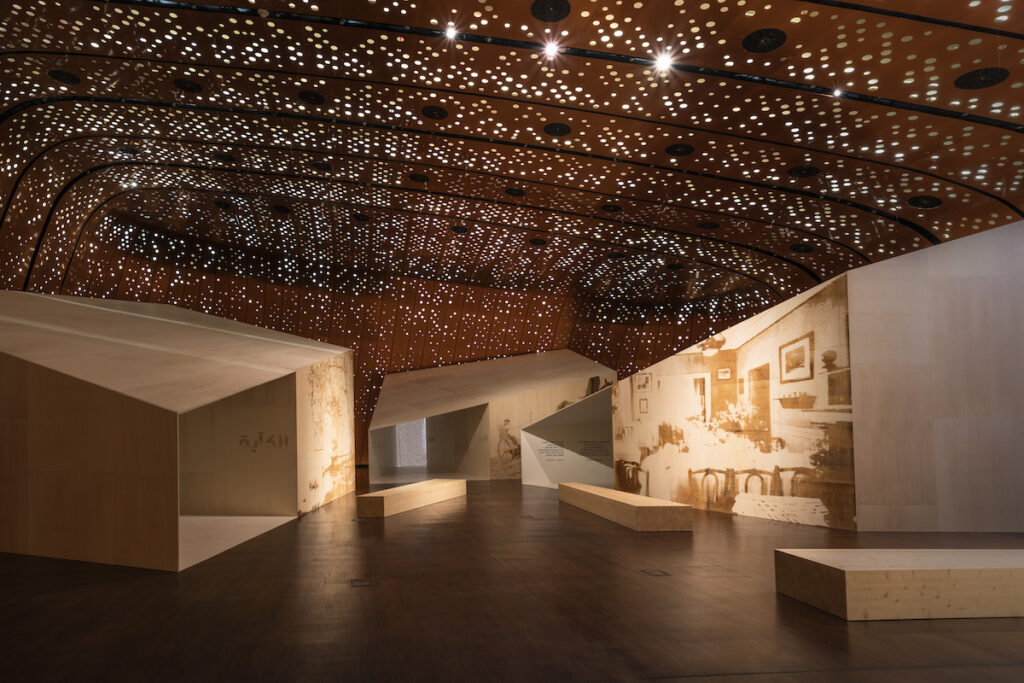 The striking perforated ceiling of The Great Hall

“Here in Saudi Arabia, there is so much focus on science and technology—everyone is an engineer,” says the show’s curator, Farah Abushallaih, on bringing Munch’s famed works to Ithra.

“They look at works of art in a museum, which is a new experience for them, and say, ‘I could have done this’. We wanted to show them something that was about more than technique—that was about capturing emotion, about expressing creativity.” 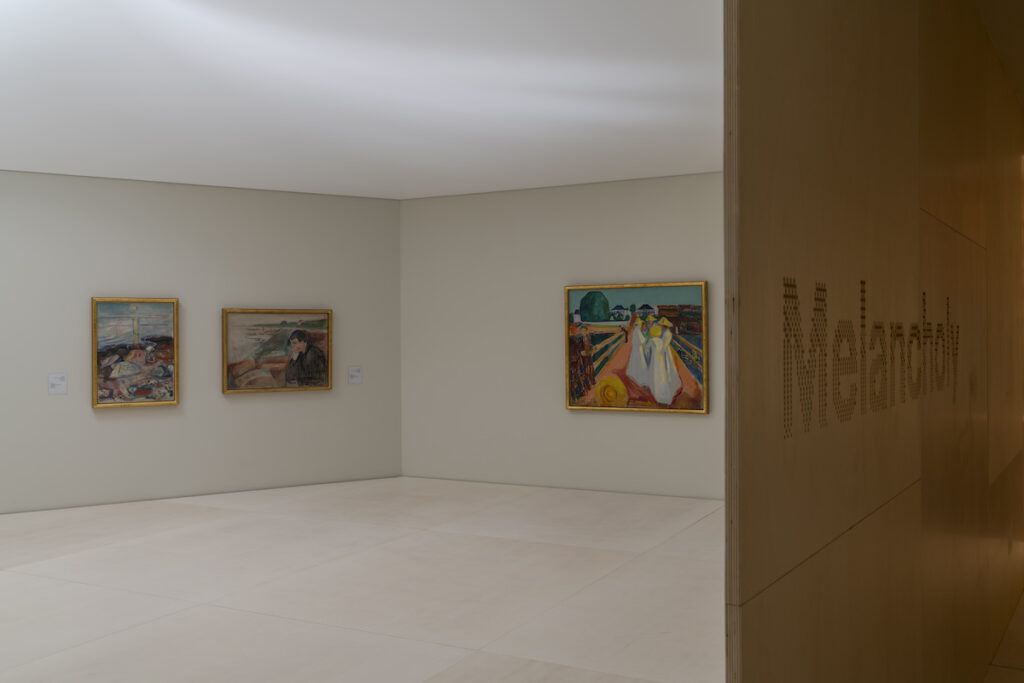 Ithra is abuzz with activity, receiving 700,000 visitors since the soft opening last June. The library, which spans four floors and has the most space-like feel of the whole interior, has more than 220,000 printed books in Arabic and English, and regularly hosts book clubs as well as iRead, an annual reading competition.

The 300-seat theatre welcomes international shows and musicians—the musical The Wizard of Oz is currently playing – while the 300-seat cinema currently screens non-commercial and locally-made films, as well as commissioning new productions by local filmmakers.

This November at Ithra: learn the art of storyboards for film and TV, attend a playwriting workshop, sketch in the galleries or watch the true story of King Tut’s treasure. Ithra.com

Read Next: Exploring Public Art in the Middle East