When Louis Vuitton launched its Artycapucines project in 2019, the ground-breaking collaboration gave six contemporary artists free rein to reinvent its classic Capucines bag, with artists including Sam Falls, Nicholas Hlobo and Tschabalala Self each lending their vision to the brand’s renowned craft. Fast forward one year and American artist Henry Taylor is the latest creative to be enlisted by the French fashion house for the collection, marrying his expressive 2017 painting ‘A Young Master’ with the latest cutting-edge laser printing and traditional marquetry.

Born in Oxnard, California in 1958 to a commercial painter father and a housekeeper mother, Taylor rst realised his love for the arts while working as a psychiatric technician at the Camarillo State Mental Hospital. Here he painted portraits of patients while studying for a BFA at the California Institute of Arts – an experience which ignited his passion and would ultimately shape his entire career. “I was in my twenties,” says Taylor, “and around that time I met James Jarvaise, a painter who’d been in the 1959 MoMA group show called 16 Americans, curated by Dorothy Miller, alongside people like Frank Stella and Robert Rauschenberg. Jarvaise saw my paintings and said, ‘Henry, you need to start taking my painting class,’ and I said ‘Wait, you need to go to school to be an artist?’ I was naïve, you know. He really changed my life.” 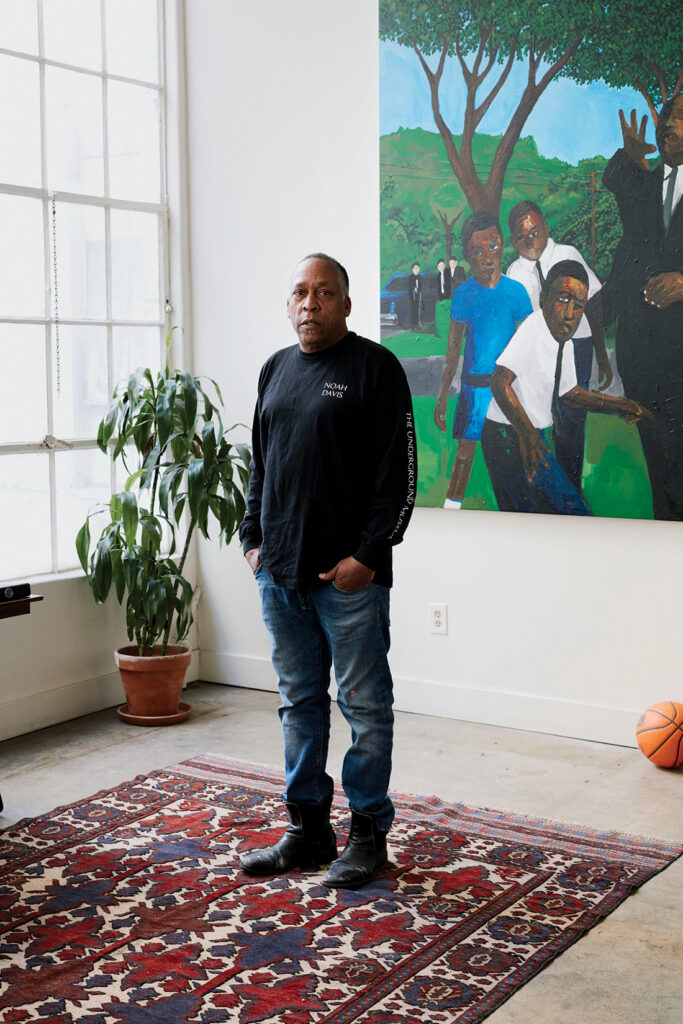 American Artist Henry Taylor at his studio in LA 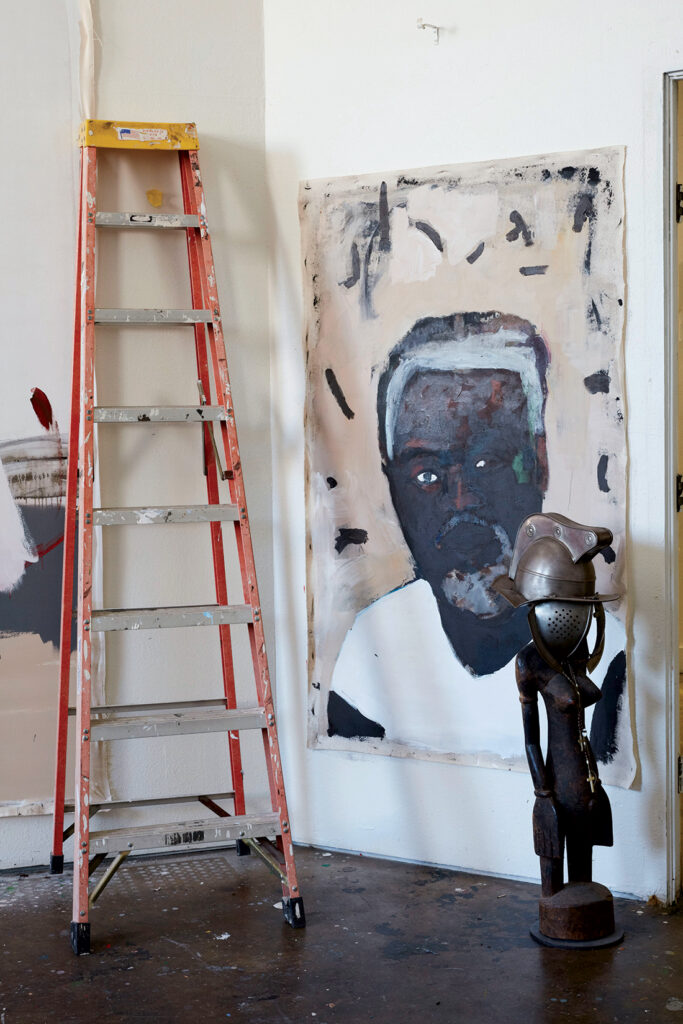 Henry Taylor began painting portraits in the ’80s, inspired by the people he met

Best known for his portrait paintings, the Los Angeles-based artist synthesises imagery and figures from history, popular culture and personal experience to present complex social commentary. African American subjects are a key focus in his work, which often explores his experience of being black in contemporary America, with subjects ranging from prominent industry gures in the art world and celebrities including Miles Davis and Cicely Tyson, to victims of police violence. That said, his earliest inspirations came from his mother, whose nurturing nature would go on to permeate deep within Taylor’s imaginations when it came to his creations.

“Working in a psychiatric hospital means you experience a lot of challenged people, and way before that my mother used to invite homeless folk who we knew from the neighbourhood into our home to give them something to eat, to hear their stories,” he explains. “I think all this permeated and affected me, made me empathetic when I paint, whether it’s a landscape or a portrait of someone on Skid Row in downtown LA.” 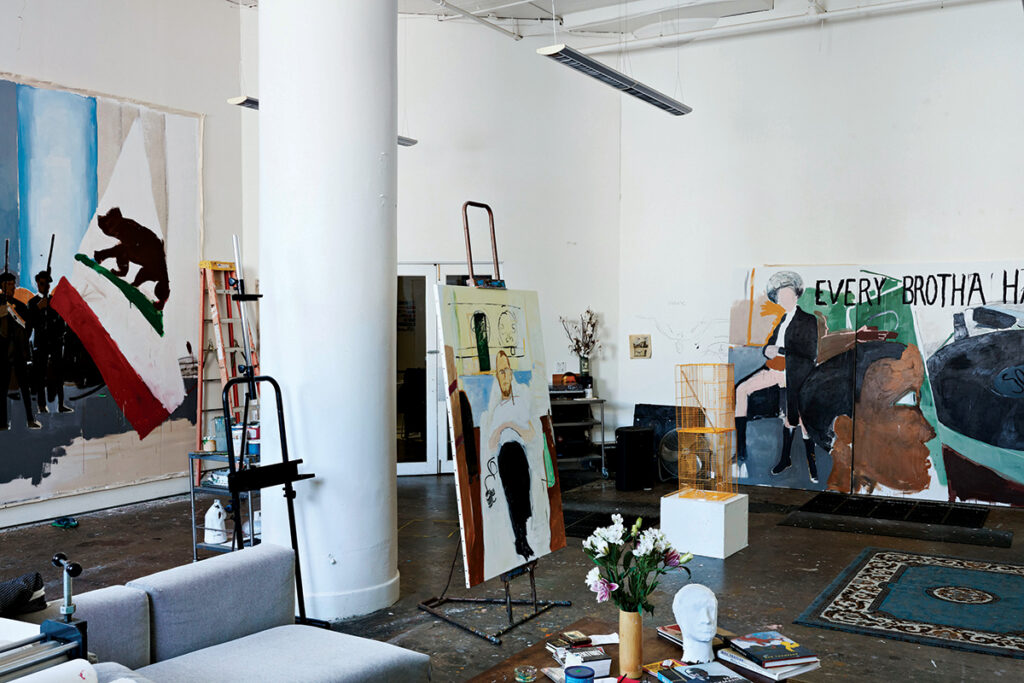 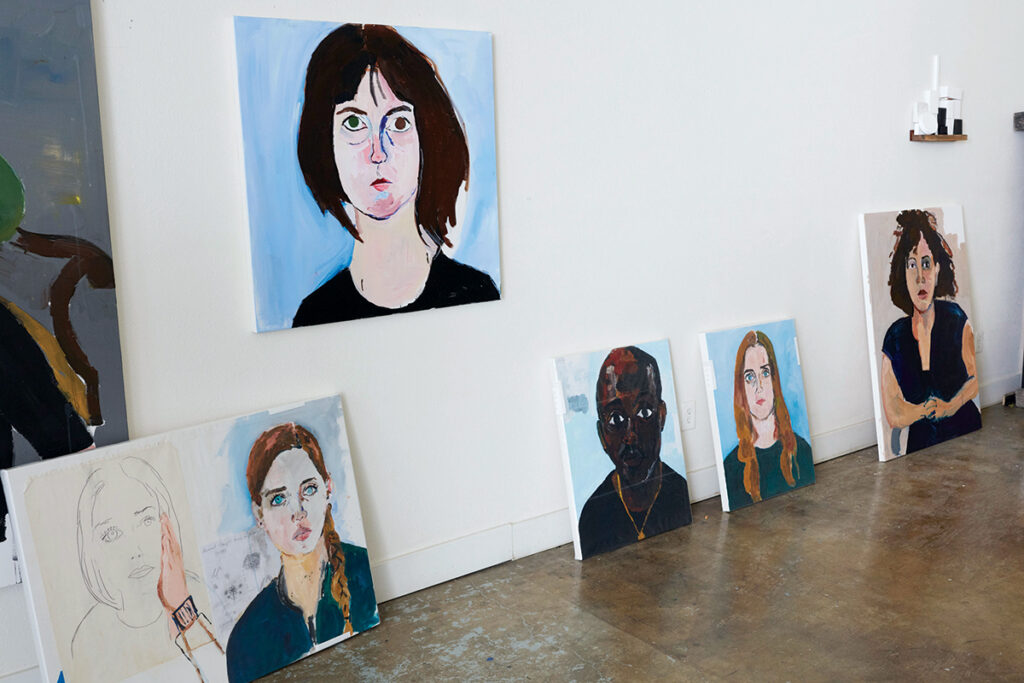 Over the past decade, his profile has steadily risen, and he now boasts an impressive portfolio of high-profile collectors including Beth Rudin DeWoody, François Pinault, the Rubells, and Peter Brant. And while his auction record of $975,000 was set at Sotheby’s New York in 2018 with the sale of ‘I’ll Put a Spell On You’ (a layered tableau of gures standing outside and lying indoors), six of his top 10 auction prices were set just last year. They remain relatively in line with his private sales, which have hovered between $100,000 and $300,000 for new works, and have gone as high as $850,000 for older material.

Taylor is no stranger to Louis Vuitton – his work is part of the permanent collections of the Fondation Louis Vuitton, and in 2018 the museum bought one of his paintings of the US-Mexico border, priced at $175,000. However, he fuses fashion and art for the first time with his latest project for the house, with the iconic taupe taurillon leather of the Capucines bag serving as the perfect blank canvas for ‘A Young Master’ – a portrait of the late Noah Davis, the black American artist and founder of LA’s Underground Museum who died due to complications from a rare cancer at the age of just 32. 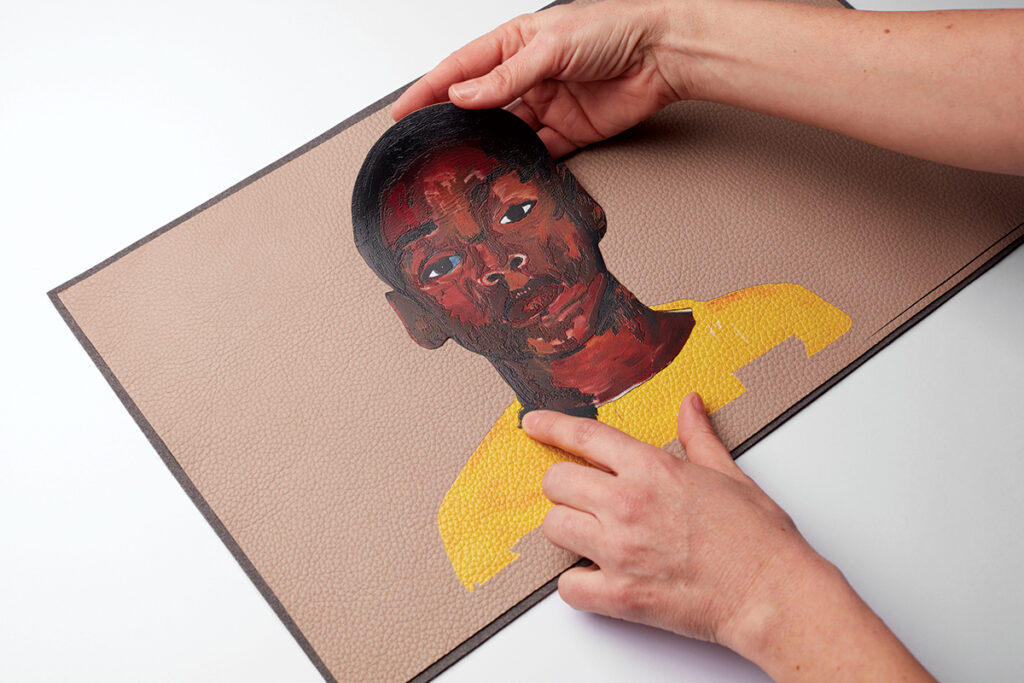 “When I first met Noah, he made a real impression on me,” says Taylor. “I’m the youngest sibling in my family, and he was younger than me, so I looked to him as a very smart and ambitious little brother. I never thought I’d miss somebody so much; it’s hard for me to talk about him. “Noah was a real visionary to put together a grassroots community museum like Underground. It’s the most progressive space in LA. So putting his portrait on this bag is my way of keeping him here and present.” Reproducing the painting expertly on leather required all Louis Vuitton’s expertise, with over 100 experiments to test di erent methods of 2D and 3D printing needed before the image on the leather matched not only the exact colours of the original work, but also its multitude of textures.

However, the end result is a portrait that is also a sensational sculptural bas relief created by exact reproductions of Taylor’s original brushstrokes. A white leather ap, leather-covered handle attached with brass and leather rings, and a metal ‘LV’ inlaid with smooth leather act as an eclectic contrast to the bag’s body, bringing his unique vision of the brand’s legacy to life. 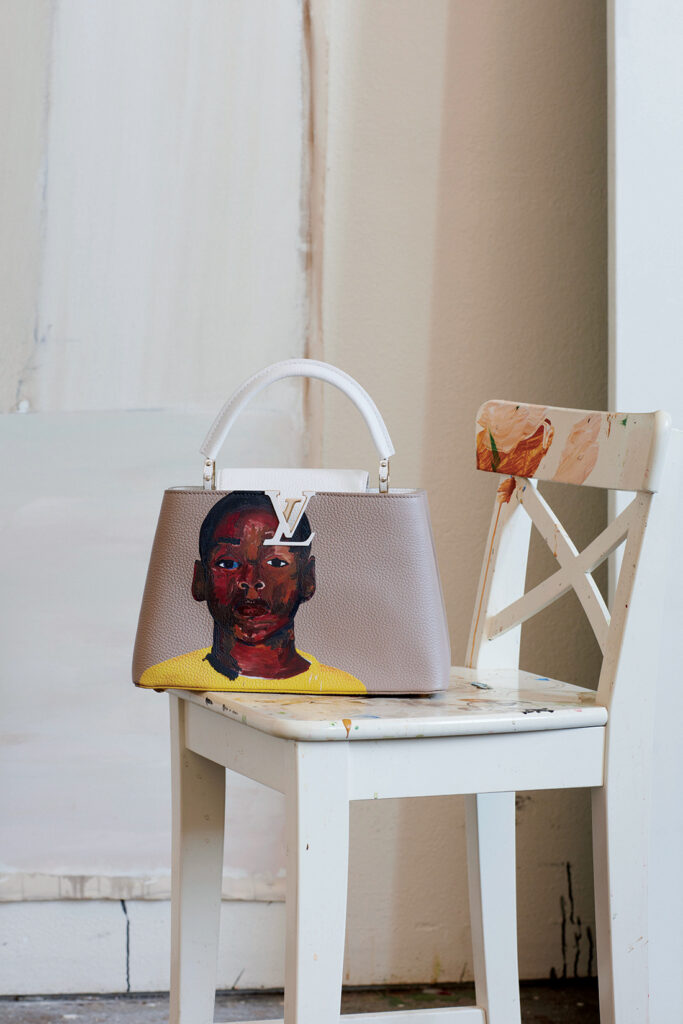 Taylor’s painting on the LV bag, photographed by Christophe Coënon

Inspired by Rue Neuve-des-Capucines, the Paris street where Louis Vuitton opened its inaugural store in 1854, the Capucines bag was rst introduced in 2013, with only 300 of each limited-edition design produced. Originally notable for eschewing the brand’s traditional monogram canvas for just one bold italicised ‘LV’ on its front, seven years on and the style remains well-loved, with its minimalist design keeping it beyond the realm of trends.

And how does Taylor now feel about being part of this iconic legacy? “Seeing the completed bag is beautiful; it makes me want to cry,” he says. “There’s that quote, ‘Sometimes you have to be lost before you can be found’, and with this project, it was about what I found. It feels right.”

Read Next: Lebanese Artist Suzi Nassif On How Art Can Impact Societal Change

Five Art Exhibitions To Add To Your Calendar This Autumn