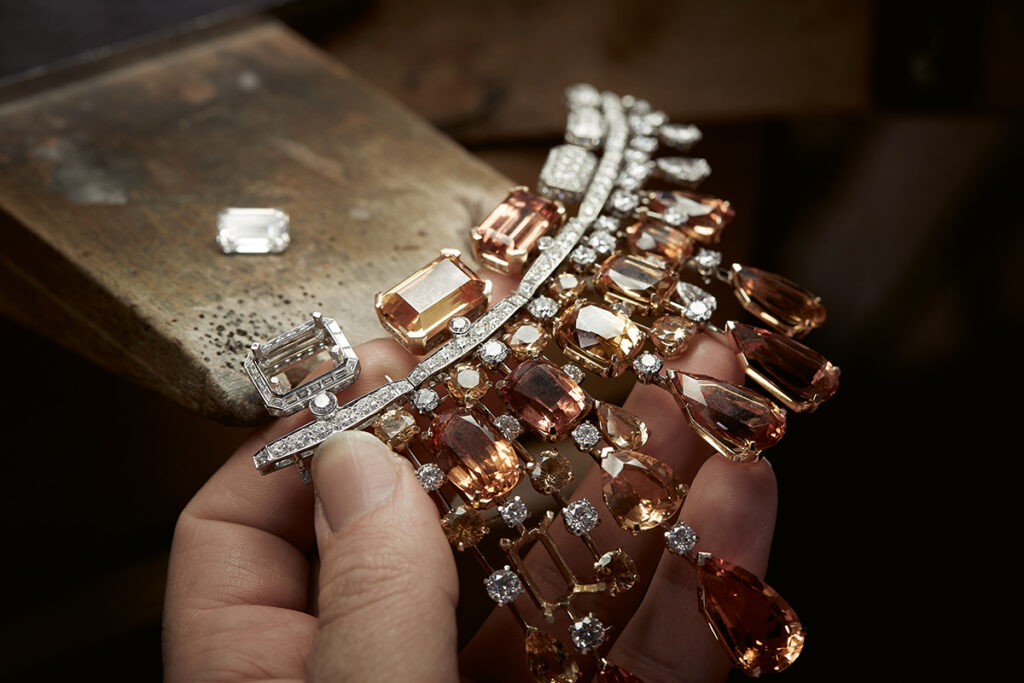 It was back in 1921 when Ernest Beaux and Gabrielle Chanel created a scent that would revolutionise the way women smell. A full century later, and Chanel N°5 is arguably still the world’s most iconic perfume – so much so that to mark its centenary, the director of the Chanel Fine Jewellery Creation Studio, Patrice Leguéreau, has created the first high-jewellery collection ever to be dedicated to a perfume. Comprising 123 extraordinary pieces that express the different facets of the world’s most famous fragrance, from the bottle and the sillage to the stopper and the number five, Collection N°5 translates each element of the scent into an exceptional display of stones that are easily recognised as having a visual connection to this legendary creation. It’s a natural continuation of both the graphic codes of Coco’s perfume and of her 1932 high-jewellery series, Bijoux de Diamants, which at the time was renowned for shattering the codes of French high jewellery. 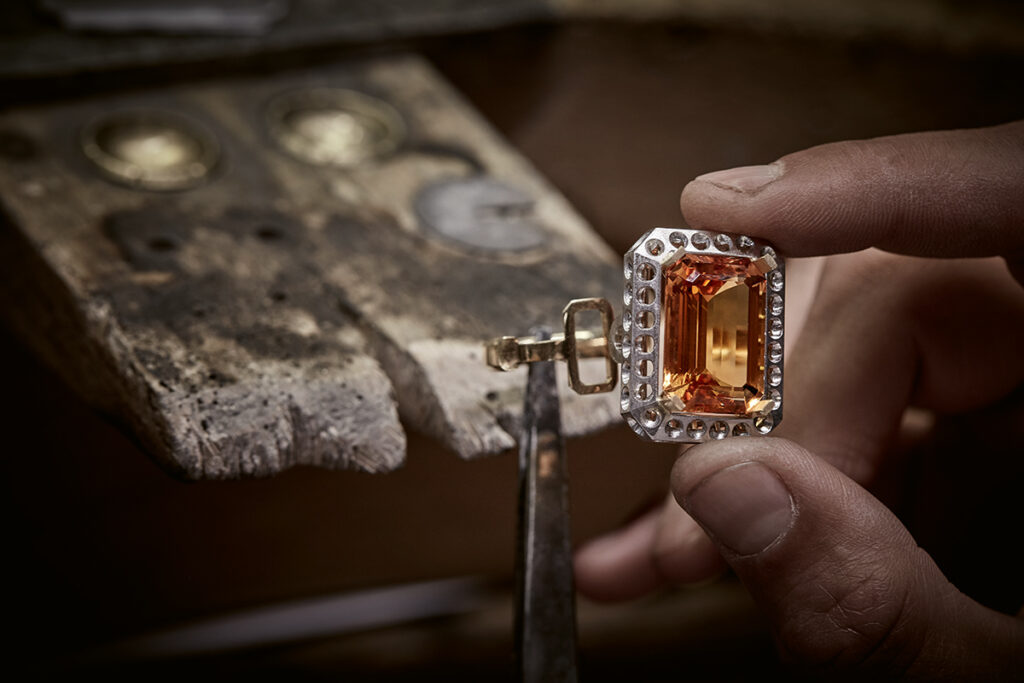 One of two stunning necklaces that replicate the scent’s sillage – or the perfume trail left in the air when its wearer leaves the room – with an explosion of colour ignited by gemstones in various shades of red, orange and yellow, the glorious Golden Burst necklace is a true work of art from Chanel Haute Joaillerie’s expert artisans. Reminiscent of the N°5 droplets that linger on the skin, Leguéreau crafted a statement piece designed to shimmer over the body like perfume in a bottle, complete with the sumptuous, fiery tones that radiate from its 350k of blazing imperial topaz dramatically dripping down the neck. Designed to create a glowing effect that pays tribute to the explosive olfactory experience of the warm amber notes of the perfume, the precious stones are set in yellow gold and platinum, and complemented by a central 4.5k emerald-cut diamond that is sure to cause jaws to drop. Completing the Golden Burst chapter, a show-stopping ring also comes crafted in yellow gold, platinum, diamonds, imperial topaz and onyx that, just like the entire collection, is bright and unique in its theme, geometry and experimentation. There’s no doubt that Collection N°5 will succeed in securing itself a future no less bright than the history of the fragrance it is built from. 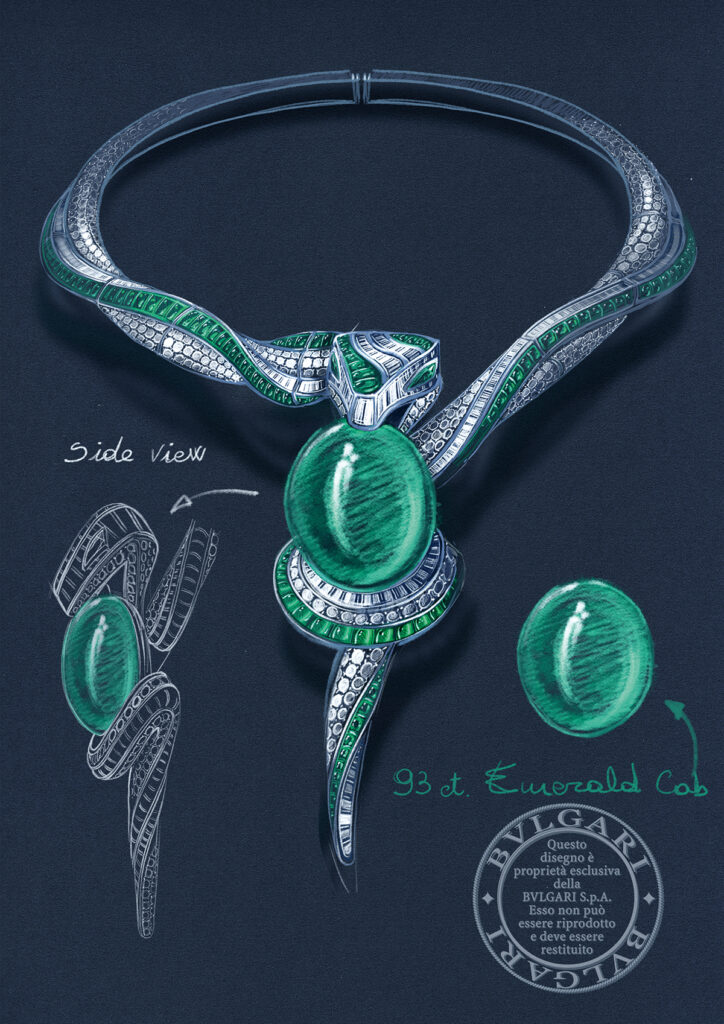 One of more than 350 designs from its latest Magnifica 2021 collection, Bulgari’s mesmerising hypnotic emerald necklace was more than 1,800 hours in the making

When it comes to the Roman house of Bulgari’s art of high jewellery, its creative director for jewellery, Lucia Silvestri, knows no bounds. Much loved by celebrities, socialites and royalty alike, the house’s one-of-a-kind pieces continue to dazzle and delight to this very day, requiring thousands of hours of expert metal-smithing and gem-setting to create. Unsurprisingly then, Silvestri’s new Magnifica 2021 collection is no different, comprising a massive 350 fine jewellery pieces and high-octane watches – 122 of which have never been seen before. Precious coloured stones, including emeralds and sapphires, dominate the collection, including the Imperial Spinel, which – created in Tajikistan and weighing around 131.21k – is said to be the fourth-largest spinal in the world. One of the Magnifica’s many highlights, the hypnotic emerald necklace reinterprets the house’s much-treasured icon, and a symbol of eternal life and feminine seduction, the snake, in an utterly new and original way. Boasting a 93.83k cabochon-cut Colombian emerald, which Silvestri discovered for the first time in Jaipur in 2018, and held in the jaws of the serpent as if it were one of its eggs, the meticulous piece required a painstaking 1,800 hours to make (it’s said that some of the collection’s pieces even required years of gemstone sourcing to ensure each and every item was crafted to the utmost perfection). 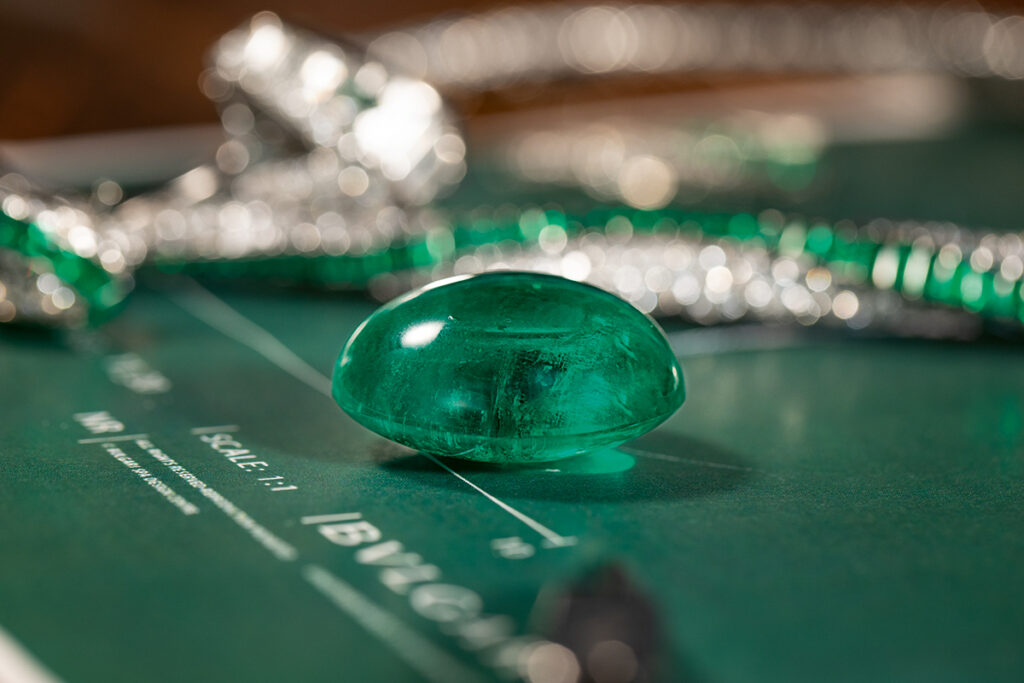 As for the snake’s body, its scales are a sinuous mesh of pavé-set and baguette diamonds, and emerald cabochons, which both gracefully and comfortably decorate the décolletage in an intricate artisanal construction. The ultimate power accessory, singer, actress and Bulgari global brand ambassador Zendaya graced the 78th Venice Film Festival sporting the hypnotic emerald showstopper, and quickly became the most-talked-about star on the red carpet. Given that the house’s skilled artisans take all of their rare gems and transform them by hand from innovative ideas and sketches into tangible works of wearable art without computer support, it’s not hard to see why. 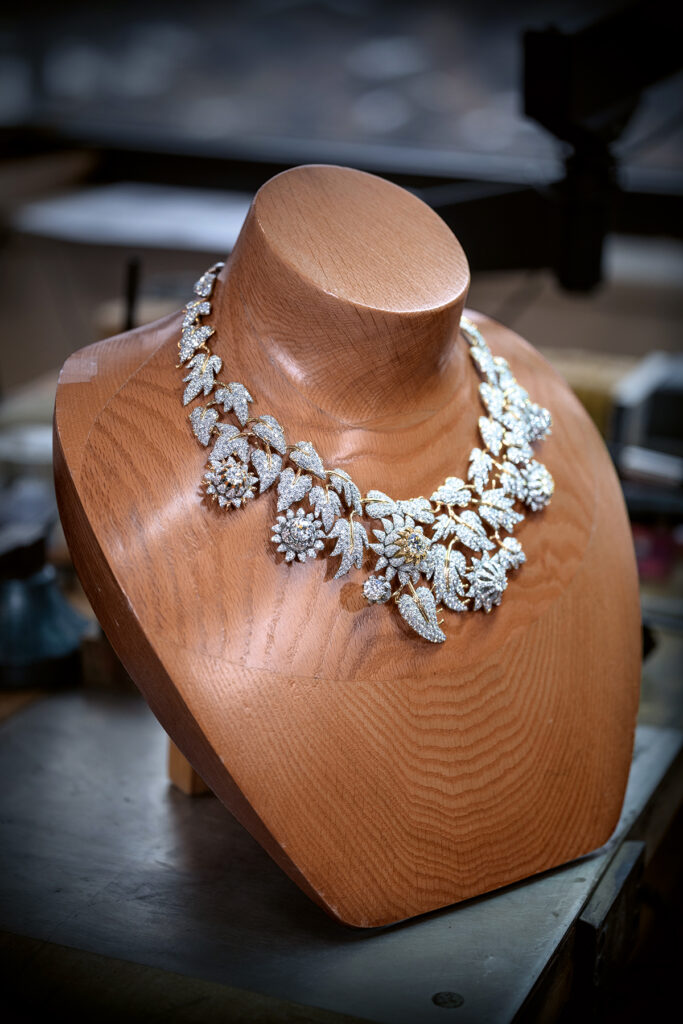 Tiffany & co is revelling in the magnificence of mother nature with its latest high jewellery collection, which pays tribute to the colourful designs of Jean Schlumberger

Every year since 1845, Tiffany & Co has treated us to bold and beautiful fine jewellery pieces that stun with creativity and experimentation. Often collated into the Blue Book Collection, consisting of several dozen pieces of jewellery that differ in style, but are unified by a common theme, 2021 is the house’s year of nature, with its latest collection defined by the four categories of Land, Water, Earth and Sky. Debuted at Tiffany’s largest exhibition of high jewellery in China as part of its 2021 Blue Book Collection, Colours of Nature, one of the most-talked-about masterpieces, the Tiffany & Co Schlumberger Thistle necklace, was created in honour of Jean Schlumberger’s enduring legacy. A lifelong nature enthusiast, passionate about transforming high jewellery with his vibrant visions of flora and fauna, the Alsatian-born designer joined the fabled US jewellery house in 1956 – his private salon on the mezzanine of the Tiffany flagship on Fifth Avenue has a guestbook that recorded visits from Senator John F Kennedy, and he also designed the sapphire and diamond dolphin pin that Richard Burton gave to Elizabeth Taylor to memorialise The Night of the Iguana. In other words, he’s a rather extraordinary man. 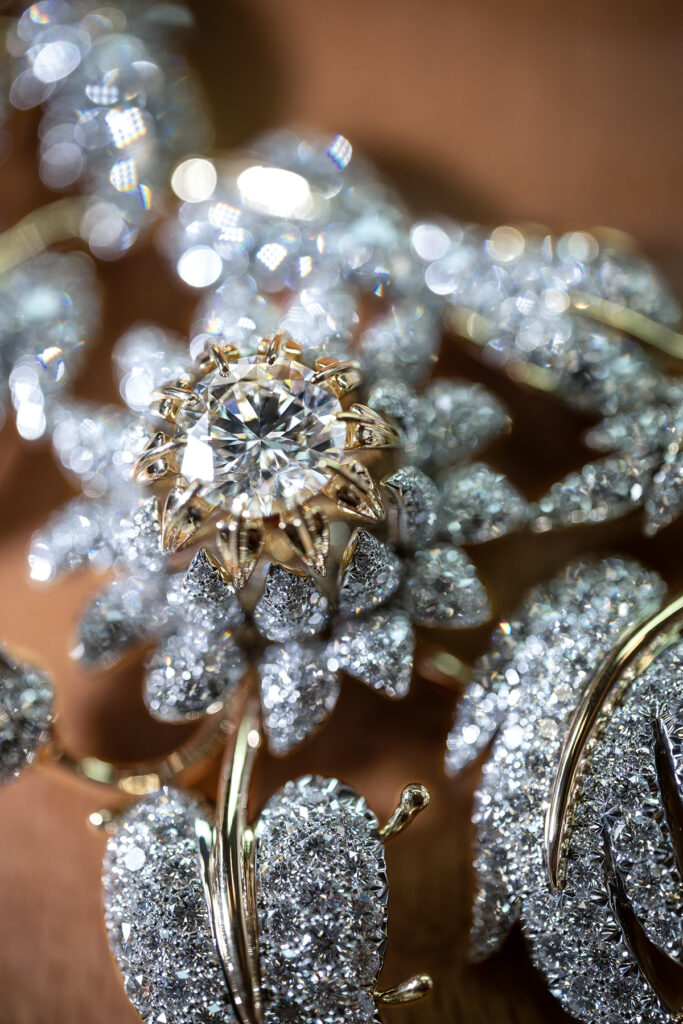 Over two years in the making, inspired by the Earth’s natural landscape and reflecting the lushness of the botanicals that stretch across the land, the Thistle necklace saw the house’s artisans methodically use 18k yellow gold wire to tether each sparkling diamond together, layering textures, dimensions and shadows with aplomb. Each platinum and diamond bud is unique, as though it was found among a field of wildflower, with the necklace highlighting the bristly thistle flower’s unique shape. Reminiscent of the distinctive rococo style Schlumberger developed during his close friendship with fashion icon Diana Vreeland after the war, the Thistle necklace requires a level of craftsmanship rarely seen, demanding the utmost precision and dexterity to ensure each and every diamond is perfectly set for optimal appeal and wearability. Two Thistle earrings were also created to pair with the alluring wildflower necklace, alight with brilliant round diamonds set in platinum, and accentuating the flower’s enchanting contours. This certainly is Mother Nature at her finest. 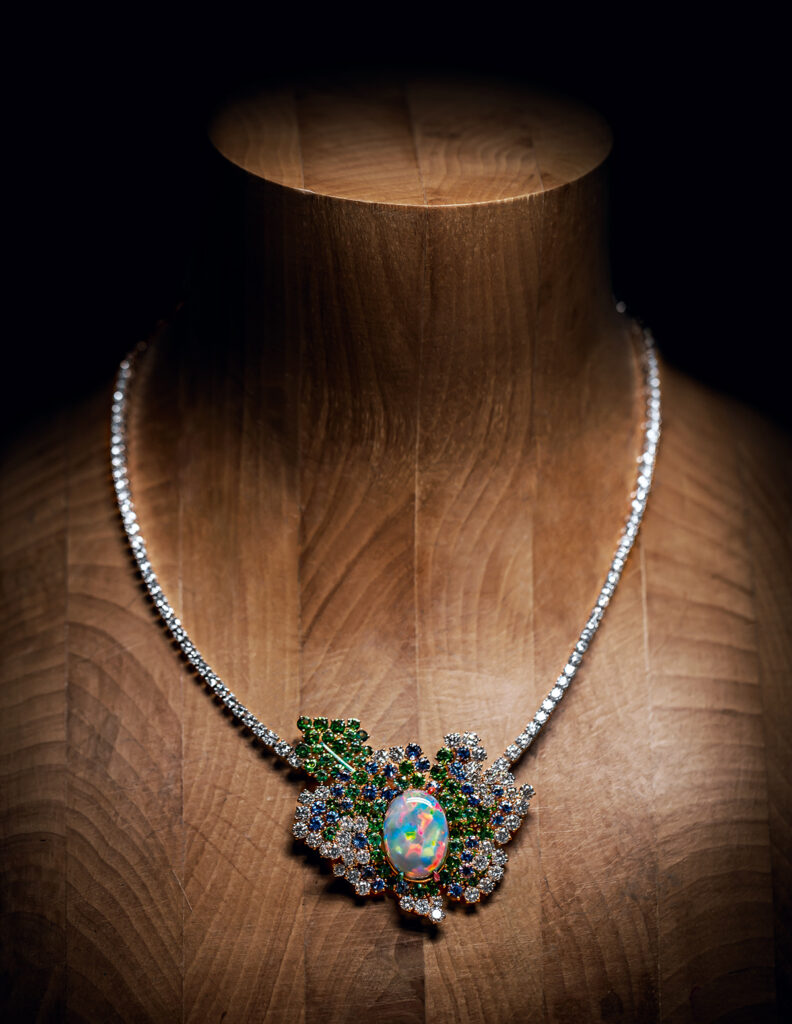 From ready-to-wear and couture to haute perfumery, the rose has long inspired creations at the house of Dior. Monsieur Dior even ranked it high among his favourite flowers, and in his youth the designer could mostly be found in the garden of his childhood home in Normandy admiring one of nature’s greatest works of art. It’s no surprise then that 10 years after the Bal des Roses collection, artistic director of Dior Joaillerie, Victoire de Castellane, has brought the beloved flower back into the spotlight with her latest fine jewellery collection, Dior Rose, which, at 116 pieces, marks her largest effort to date. 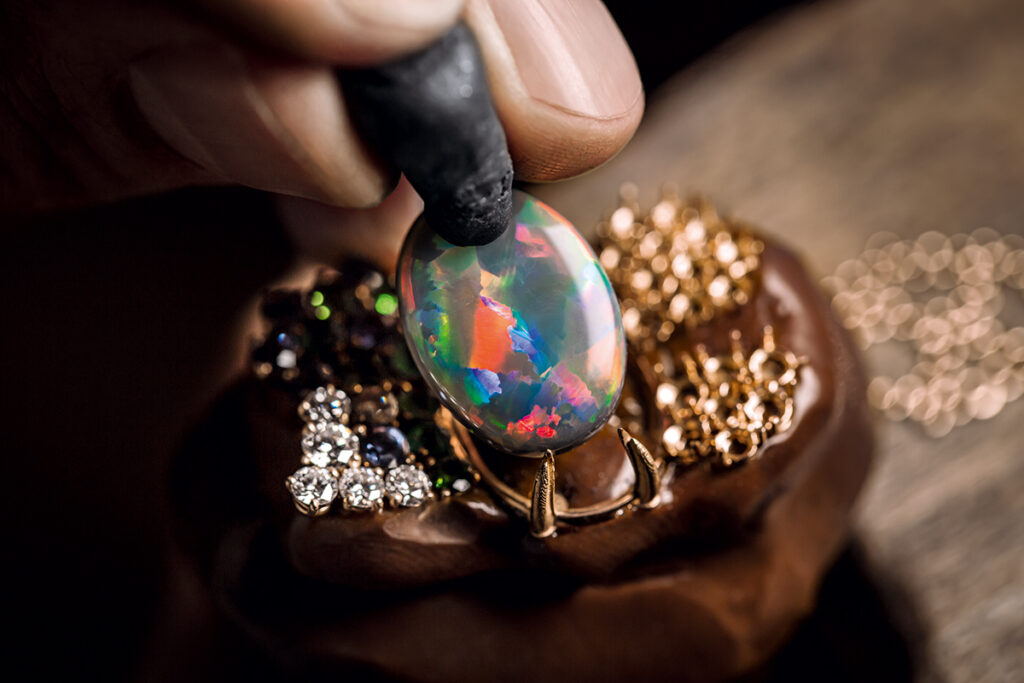 Falling in line with the timely reopening of the house’s historic home at 30 Avenue Montaigne, where Dior opened its first ever store in 1947, de Castellane’s jewels come crafted with a fantastical twist in mind, unveiling a sequence of four chapters that reinterpret and reimagine the shape and colour of the famous bloom in four different ways: the romantic rose; the stained-glass rose; the abstract couture rose; and the futuristic rose. Typical of avant-garde art, the latter features lacquered claws and a rose-gold setting, conjuring the vivacity of a Zambian emerald, as well as opals set in the centre of a flatter, fragmented interpretation of petals. Creating a pixelated effect throughout, the necklace also features slightly off-centred golden South Sea pearls, which act as radiant pistils for the stylised flower, while graphic petals cluster around a heart of pink spinel or tsavorite garnet, which were chosen for their complementary hues. Elsewhere in the collection, interpretations honour the rose in its truest form, and you’ll find Myanmar sapphires, Colombian emeralds, Mozambique rubies, dewy diamonds, and more, dispersed across a number of surreal shapes, all as equally spectacular as the last, and once more elevating the precious flower to a whole new level. Things sure are looking rosy at the house of Dior.