Celestial beings abound in a new Van Cleef & Arpels collection of high jewellery. MOJEH looks to the heavens with the maison’s president and CEO Nicolas Bos to understand what makes Sous Les Étoiles so very stratospheric

Have you ever looked up at the inky night sky, and felt that its twinkling stars were so close you could almost touch them? As though the heavens themselves were dangling mere inches from your fingertips, and all you had to do was reach out and… Grab? Van Cleef & Arpels’s vast haute joaillerie collection Sous Les Étoiles brings that reverie to life, recreating the cosmos as it’s rarely been seen before: in heavy-duty jewels and precious metals just begging to be touched and worn. The collection was dreamed up in partnership with noted astrophysicist Dr Isabelle Grenier, who used high-tech telescope images to demonstrate our colourful, dynamic and ever-changing universe to Van Cleef’s design team. “The colour palette, when we looked at these pictures, was extraordinary,” says Nicolas Bos, president and CEO of Van Cleef & Arpels. “If you look at the history of jewellery, when there is a representation of the skies it’s very often based on 19th and 20th century styles, which is more like black and white, stars on a dark background. But here we felt that there was a story to tell and build, trying to represent these combinations of colours which are absolutely fantastic in a way we have never tried before. Isabelle is a specialist in sky imagery and works with NASA and the European Space Agency. We didn’t have these pictures for reference before now, and there are some colours that are not absolutely obvious. When you think of the skies, green is not the colour that you associate with the cosmos, but it was in Dr Grenier’s images. So that was kind of the driving force,” adds Bos. 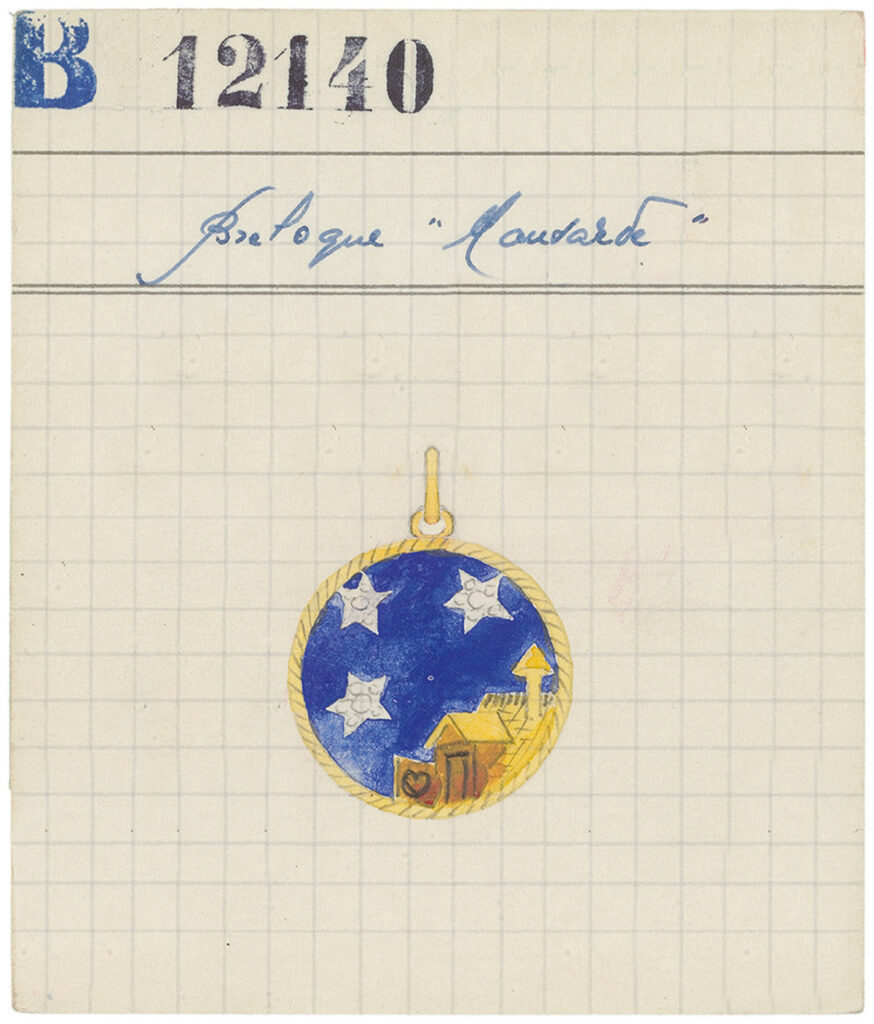 The extraordinary adventures of Jules Verne have been a recurrent inspiration for previous Van Cleef & Arpels collections and pieces, resulting in some deeply whimsical representations of space. But for Sous Les Étoiles the motivation is that few steps further and deeper, using the latest technology as well as reaching back through time to the very earliest charters of our universe. “In the 16th century, Johannes Kepler was a major inventor of modern astronomy, a scientist and contemporary of Galileo Galilei,” explains Bos. “But he also wrote a poetic text called The Dream, where he imagines himself projected into space and standing on the moon. It was actually his way of promoting his solar-centric view of space, which was prohibited at that time so he couldn’t express himself scientifically. The only way he had was through a poetic narrative. These are just a few of the elements that inspired us, before diving in to the more traditional creative process – the stones, starting to sketch and the end result.” 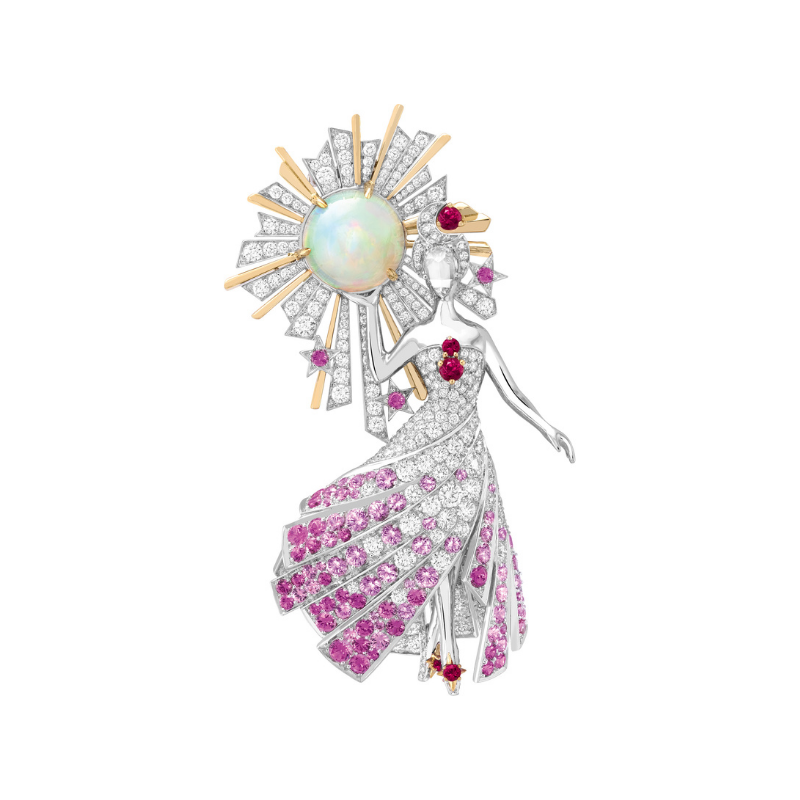 Despite the lofty theme of this collection, it remains down-to-earth in a most tactile way. This is best represented by the appearance of Van Cleef’s signature fairy figurines, resplendent in all their cosmic glory. “We tried to interpret some of the goddesses in Greek and Roman mythology that were identified with planets, but of course in terms of design and craftsmanship keeping it to the same scale as the traditional fairies and ballerinas,” says Bos. “The same type of attention to detail, but here featuring this beautiful representation of the planets and the constellations identified with human or God-like symbolism. So instead of the fairies coming from Shakespearean forests, these fairies come from the skies.” The enigma of the ethereal feminine figure can be subtly deciphered from other pieces in the collection too – the diamond and sapphire-studded lapis lazuli arch of the Ciel de Minuit necklace might well evoke the Ancient Egyptian goddess Nut, stretching and twinkling across the sky. While the Hélios necklace, breathtaking with a 50 carat yellow sapphire at its centre, represents the Greek sun god with a golden orb of majestic proportions. But the standout piece for Bos is none other than the magnificent Halley transformable necklace and ring. “Obviously I love the whole collection, but if I was to pick it would be the Halley necklace,” says Bos. “It has the traditional diamond necklace structure, but in a way it’s very figurative because you can identify the shape of the comet, while it still remains abstract with a combination of colours. It’s not an obvious configuration and I think that the sense of movement, which was most important, is pretty accurate. Really working with the detail of the design, the volume, the jewellery work and the way the stones are set and organised captures some of that energy and movement, which is what we try to do.” 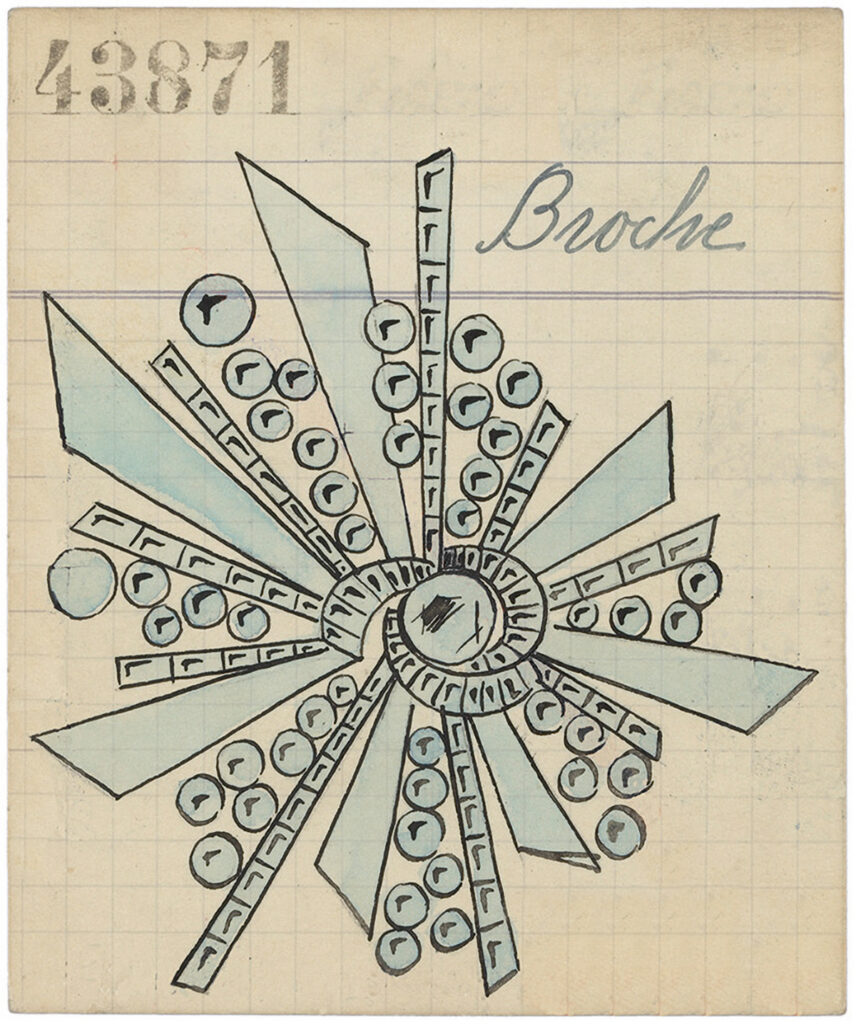 As Van Cleef & Arpels collections go, Sous Les Étoiles is one of the maison’s most abstract works to date. With plainly figurative pieces way outnumbered by more stylistically free creations, it forms a truly wide-ranging and varied collection, while still retaining that unmistakeable VC&A touch. “Keeping that mindset of representing nature, you are representing the abstract but not for the sake of being abstract,” says Bos. “This may be associated with modernity, so more in the direction of really trying to highlight the strength of the colour and different materials without associating them solely with an identifiable configuration. I think that gives a bit of that modern feel and there is somehow more freedom, in a way. When you want to represent a flower or a ballerina, of course you want to be as precise as possible within your style. Whereas here you want a more provocative feeling with shapes and colours, so there’s more freedom and that’s what we try to translate.” Whether classic or modern, abstract or figurative, at the cutting edge of technology or inspired by the very dawn of astrology, one thing is certain – with Sous Les Étoiles, Van Cleef & Arpels reached for the stars. And caught them.

Read Next: The Most Spectacular Celebrity Engagement Rings

This Star-Studded Documentary Takes You Behind The Scenes At Bulgari