From the City of Light to the Big Smoke, ‘Wanderland’, the latest exhibition from Hermès, arrived in Dubai and MOJEH took a walk through in wonder.

As I pull back floor-sweeping strands of black fabric, a silver-panelled disco ball twirls, setting the room a-glitter as it moves from wall to wall. Tiny squares of light bounce, then swivel and dance before me. Flashing in an almost rhythmic motion, scenes from old French films play out. My mind no longer feels like my own, as I’m taken to the cobbled streets of the City of Light and I hear Parisians loudly chatter in black-and-white, their voices fading to a mere whisper before they’re gone.

“As the flâneur, you don’t know what you’re going to discover at every step and you’re constantly surprised,” explains Bruno Gaudichon, the exhibition’s curator. I enter a room full of walking sticks. Is this the accessory of the flâneur? They’re illustrated in black across pure white walls. They’re encased around glass, sunken into the room’s structure. And they’re captured in videos, on repeat – like a graphic window bringing the sticks to life as a man dances with his. But, who exactly is the flâneur? “The entire exhibition has very much been influenced by Émile Hermès. He travelled a lot and visited a lot of antique houses, and the objects you see inside were purchases made through his passion and love. This is why we’ve incorporated the walking stick.” But he collected many things. And so, the exhibition selected from 30,000 artefacts to convey the life of the flâneur. As I look up, a delicately feathered umbrella is peeking out from the ceiling. It’s thought that Émile Hermès purchased his first umbrella at the age of 12. Maybe this acted as a catalyst to his loving obsession with collecting, as he travelled.

The first step away from the room of walking sticks and I’m met with a play-off: Competing ladies’ and gentlemen’s salons. For the women, multiple Hermès bags are encased in frames and encircle a grey horse’s head. As the light goes out, it immediately switches to the other side, forcing the observer to look the other way. From tennis rackets to smart helmets, it conveys the brand’s vast history of design. “The whole exhibition is a series of links. The stories throughout are like an urban adventure,” explains Gaudichon. And it’s true, as you move from one room to the next; you morph into a character in your own collectable tale. The umbrella appears once more, propped up against a wooden bench and standing in a puddle. As you look closer, birds swoop across the sky and clouds glide across from one edge to the other. It’s a visual delight, and a small sort of escapism into an alternative universe. The thought of taking off is carried as I reach a perfectly positioned letterbox. Inside, envelope clutches in goatskin – from bright blue and orange to yellow – are visible. Behind them, loveable notes in French can be seen, written using a Nautilus fountain pen. This mixture of contemporary through the use of digital means and trips back in time are constant throughout. “This mixture was very important, because as a luxury house, there’s a huge respect for tradition. It was very important for us to focus on this, but also to illustrate a fusion of history with digital, and the way in which they can work in harmony,” explains Gaudichon.

For a moment, you think it would be reasonable to sit and sip on an espresso outside the Cafe des Objets Oubliés or ‘Forgotten Objects’ – a very French-style café. Where a small French bulldog greets you and Parisian music floats out from nowhere. At the bar, a line of glass objects have all captured bracelets and other novelties. But, the pièce de résistance has to be the unexpected movements on the tables. From a revolving eye inside a metal ashtray and lit cigarettes moving along as though on a conveyor-belt around a small spyglass to a paint-box with digital squares mimicking moving water – the element of surprise is everywhere. Emblazoned across a mirror are the words, ‘In the golden glow of burning acetylene lamps, the remains of a hundred happy interludes linger on the cool of the mosaic and in the crystalline cages of bottles. Thus, remiss, “Stroll on!” they say.’ And stroll we do.

“The whole exhibition is a series of links. The stories throughout are like an urban adventure,” explains Gaudichon. This explains the psychedelic nature and plucked obscurity of ‘Alice in Wonderland’ that’s felt throughout. “As a wanderer, you’re always looking for new things, you’re always on the look-out, and you’re taken aback by what you might discover along the way. I think that’s almost what someone in luxury is looking for, in terms of wanting to live luxuriously. It’s this constant feed of new things. Hermès really is the archetype of luxury.” It’s also a celebration of the quirkiness of the Hermès family history. The urban areas feature a local artist from the country it’s exhibiting in. In Dubai, artist Khalid Mezaina illustrates a scene from a topsy-turvy Parisian-style world. “Mezaina is Dubai’s artist – he’s very underground. His presence in the exhibition is very important,” says Gaudichon. “Street art is something that is developing every day, it was important that at every step we focused on flânerie, but the street artist room is vital in bringing the observer back to where they are. All the street artists we’ve used in each city are completely different from one another. I think this brings a lot of positivity to the individual cities. In a way, it brings all of the countries together.” As also are all of the other artists’ works featured – from Emmanuel Pierre, Ugo Gattoni, Romain Laurent, Nicolas Tourte, Peter Keene to Piet S – the mix of digital, history, space, time and travel is captured in many visions.

Working with set designer Hubert Le Gall, it would appear that the future really is digital. Even as I look through a window, I’m met with a very historic setting of Victorian-style dressing, a China tea set and a setback in time – but the candelabra consisting of champagne glasses suddenly begins to shine, the mini Eiffel Tower swings out from underneath a mirror and an Hermès cloak spins of its own accord. I’m in awe. This fusion of history-meets-contemporary is a wonderful fusion. “I think this exhibition in Dubai is probably the most successful out of all of them so far. I think this structure outside Dubai Mall really allows the outside to be brought inside perfectly together,” says Gaudichon. Exhibiting from January 21st to February 6th, it’s certain to be a visionary success. “I’m very happy with it! It’s a very intriguing location, and the fact that it’s a floating structure on water is magical,” he finishes. 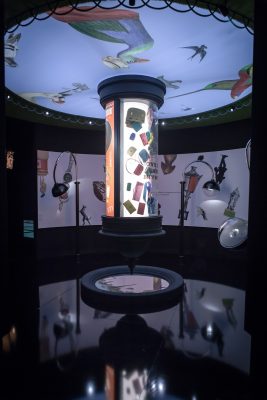 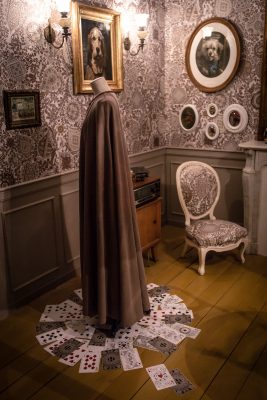 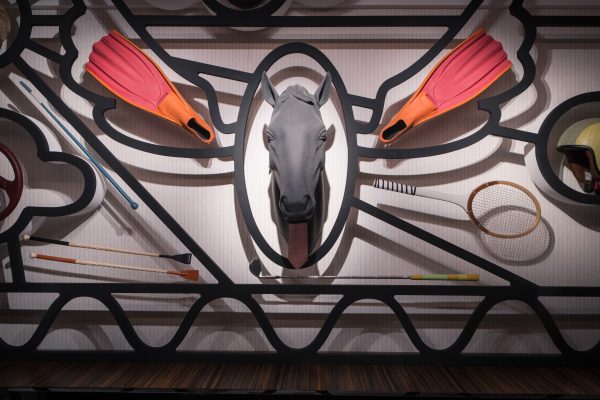 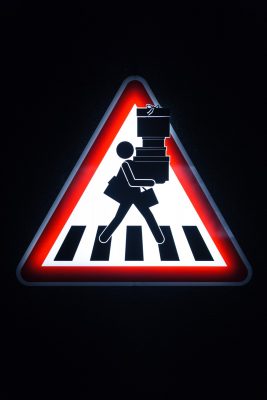 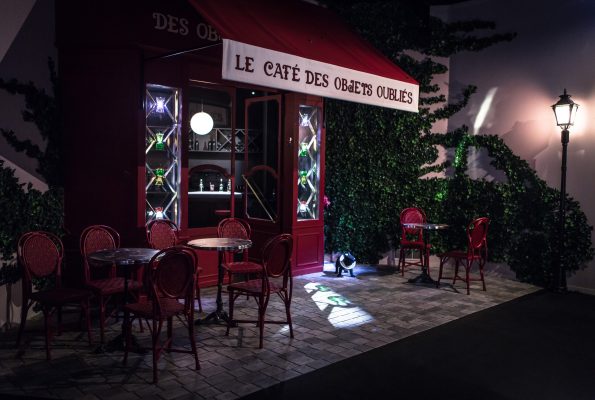 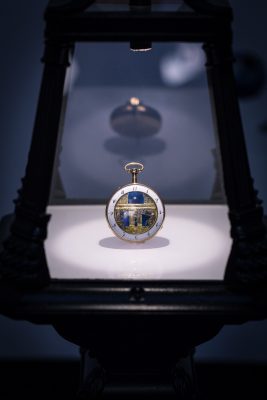 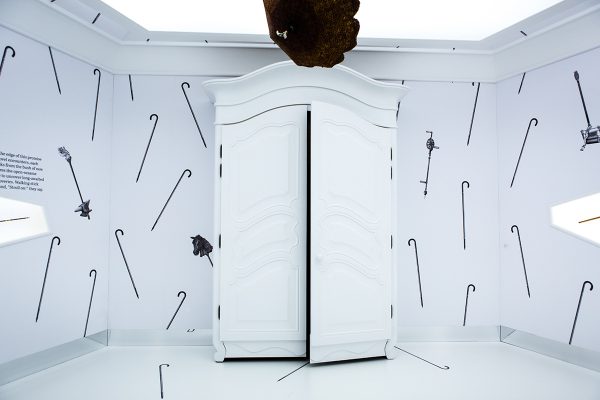 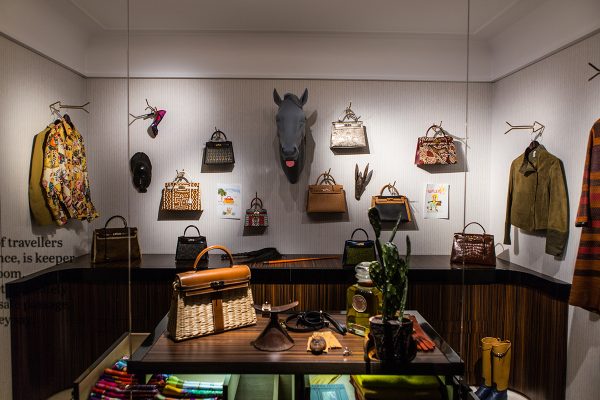 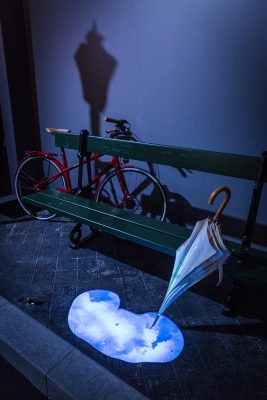 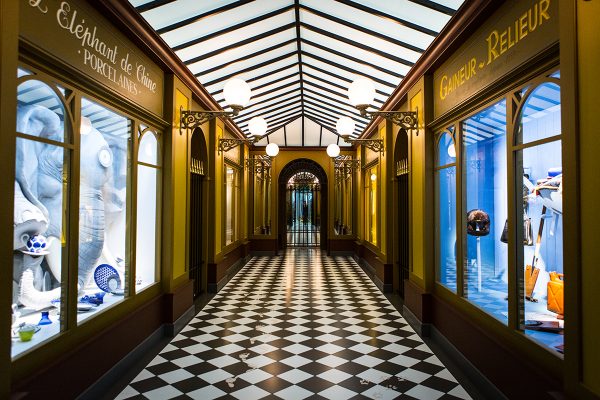 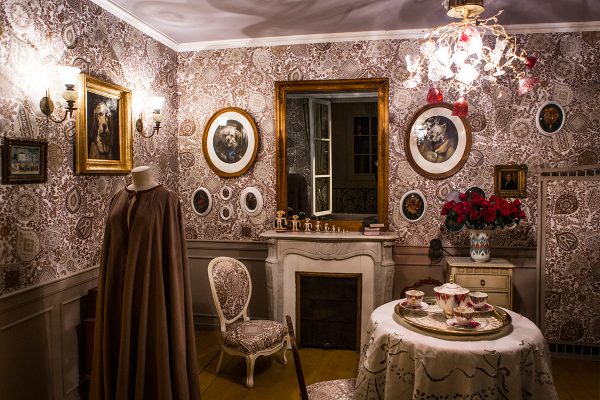 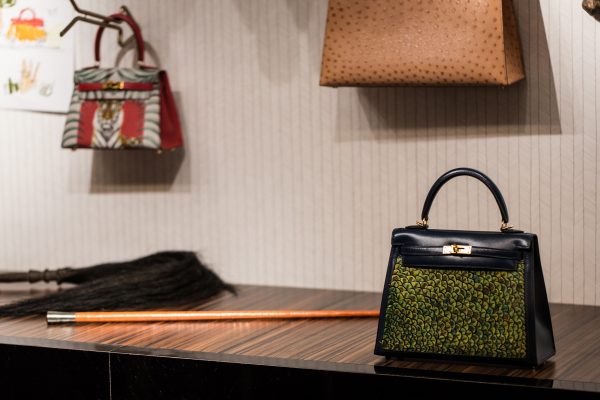 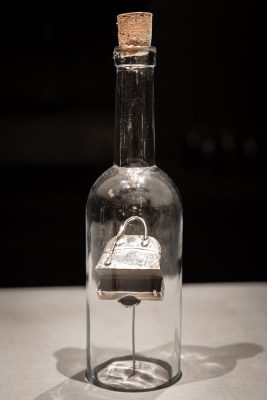 Every room has a different unique and interesting theme. Photographed by James Bort.