As the popularity of coloured gemstone engagement rings rises, diamonds may no longer be a girl’s best friend

“Traditionally, diamonds have been successfully marketed as the only stone suitable for an engagement ring,” Joanna Hardy, independent fine jewellery specialist, tells MOJEH. “However, people have finally woken up to colour, and they want to decide for themselves which gemstone they would like to celebrate and confirm their commitment to their life partners.” And Joanna would know – not only is she a fellow of the Gemmological Association of Great Britain, with more than 30 years’ experience in the industry, she’s also the author of a number of books, including Emerald, Ruby and the upcoming Sapphire, which are all sponsored by Gemfields, a world-leading supplier of responsibly sourced coloured gemstones. “What I love about them is the fact that every single gem is different, nature never makes a copy,” she says. “Two stones are never exactly the same in both colour or clarity, so your gemstone will always be unique to you.” She’s not wrong. 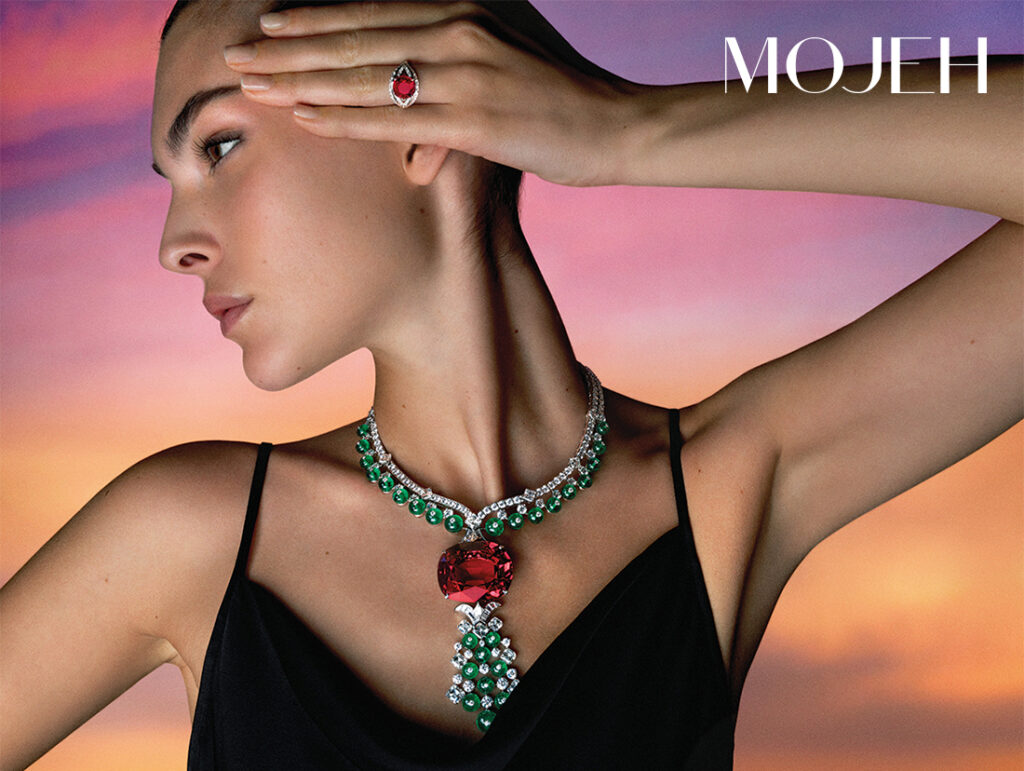 Everywhere we look, modern brides are shunning generic white diamond engagement rings in favour of dazzling coloured gems. Take Kate Middleton’s Garrard ring, an oval 12k Ceylon sapphire surrounded by 14 diamonds, originally bought by the Prince of Wales for Princess Diana, which led to thousands of copy-Kate replicas. Orlando Bloom proposed to Katy Perry with a ring featuring an oval-shaped ruby stone surrounded by white diamonds in a floral halo shape, while Victoria Beckham has three major gemstones, a ruby, an emerald and a sapphire, as part of her 15-strong engagement ring collection. The popularity of these coloured stones reflects consumers’ increasing desire to own something unique that reflects who they are, says Laura Lambert, founder of West London jeweller Fenton & Co, which specialises in creating bespoke rings using coloured gemstones. “When choosing a special gemstone, you will be showing a little bit more of your personality though that extra splash of colour,” she says.

While coloured stones might not rank as high on the durability, neutrality or hardiness scale as diamonds (the latter are a 10 on the MOH hardness scale by which gems are measured), they come loaded with sentimental value and symbolism, which Laura believes to be one of their most attractive attributes. “A lot of customers are drawn in by the deeper meanings linked to each gemstone, be it blue sapphires that symbolise harmony, or yellow sapphires embodying happiness,” she says. “Many stones have carried these qualities with them over centuries, as far back as Ancient Egypt, and can be linked to historical figures such as Cleopatra or royalty.” Indeed, Cleopatra was known for her love of emeralds, which were believed to possess powers of clairvoyance, and able to defeat spells and enchantments. 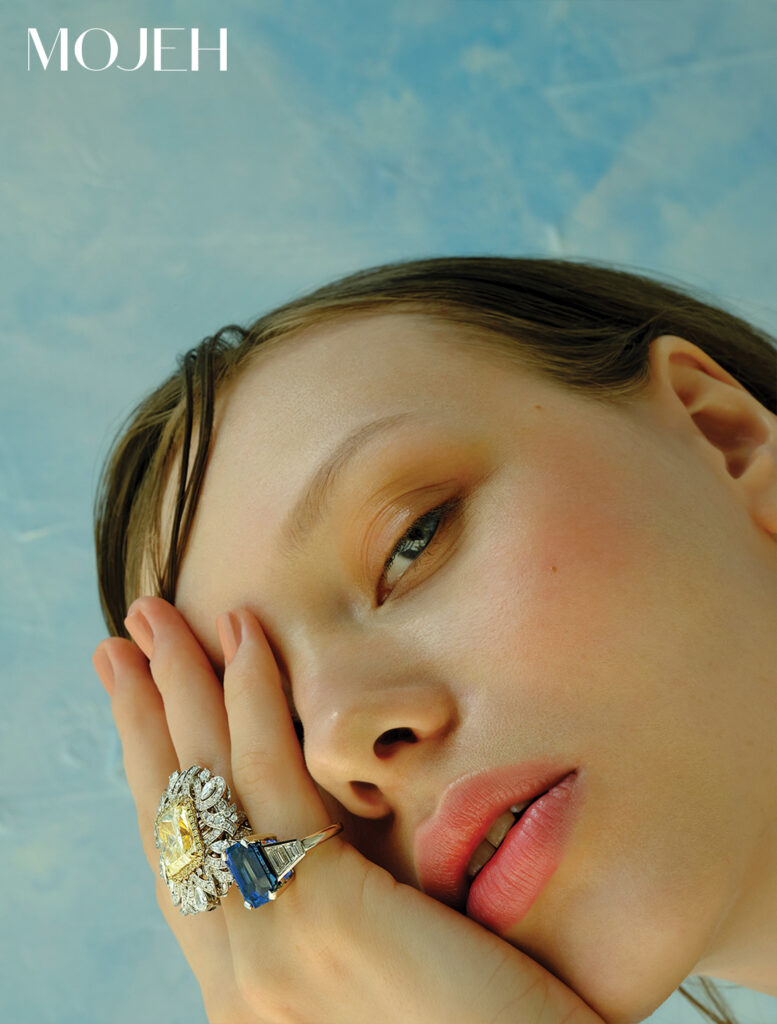 Both Laura and Joanna cite emeralds and sapphires as two of the most highly-requested stones – “when you see a gem-quality emerald, ruby or sapphire, they are quite magical, so it’s no surprise they are gaining popularity,” says Joanna – yet there’s a new wave of gems making their way to the limelight, which are equally as bewitching, and surprisingly more affordable too. “The garnet definitely deserves more time in the limelight,” says Laura. “Due to its deep inky-red colour, it’s often mistaken for a ruby, but it’s a lot juicier and more intense in colour. Garnets are a great alternative to rubies, as they can be sourced more easily, and therefore are more attractive in price.”

While purchasing coloured gemstones is not only more affordable than diamonds, there are a number of important factors to consider, starting with the shade. “You’ll want to look for a strong and even colouring of the stone and saturation, plus an even, high-quality cut,” says Laura. This means making sure it’s not too dark or pale. Joanna agrees with this sentiment, adding: “Everyone sees colour in a slightly different way, so at the end of the day the stone needs to ‘speak to you’. If you love the gem, then that is probably the one for you. Make sure you view the stone in daylight and artificial light too, so you can see how the colour may change, and avoid any nasty surprises when you take the gem home.” As for the cut, this can depend on the hue of your stone, but as a rule of thumb, lighter gemstones such as aquamarines or yellow sapphires lend themselves better to round or cushion cuts, with brilliant faceting for more sparkle. “Darker stones, such as emeralds or garnets, are better suited to emerald or oval cuts, allowing for more even light and saturation of colour,” adds Laura. 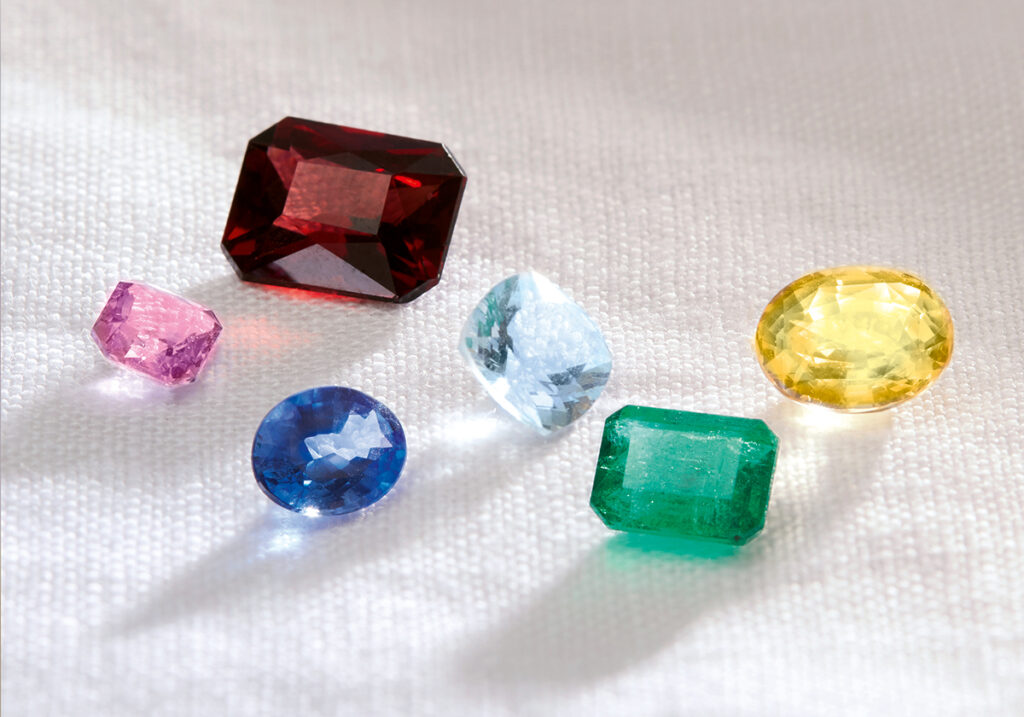 As our stronghold on materialism relaxes, making way for a generation that favours more considered purchases, the conversation around the ethicality of stones has been gaining pace, so when choosing your ring, always deal with a trustworthy and honest expert. “It’s important to ask your jeweller where they source their gemstones,” advises Joanna. “The word ‘ethical’ encompasses many expectations, which are hard to fulfil, so ‘responsibility’ is the most important word to use.” Gemfields itself was one of the first mining companies to use paternity tests, where customised DNA-based nanoparticles are applied to the rough emerald crystals, revealing the origin even after cutting and polishing. Fenton & Co also works with a transparent supply chain, sourcing its gemstones directly from trusted suppliers and countries it knows are leading in ethical mining standards. Most often, the issues focus on three factors: treatment of the workers; the effect on local communities; and the environmental impact of the mines. “By overseeing the entire supply chain and conducting regular audits of our partners, we ensure these standards are ever-existent in our operations,” says Laura. Tiffany & Co, Cartier, Bulgari and Chopard are among the other names committed to being both socially and environmentally conscious – Chopard launched its Green Carpet Collection in 2013, which was the first high-end jewellery range made with Fairmined gold and ethically sourced stones. “Above all, making considered choices and personal appeal play the biggest role in your final choice of gemstone, and most people fall in love with their stone at first sight,” says Laura. With the dazzling array of models on the market today, it’s hardly surprising. 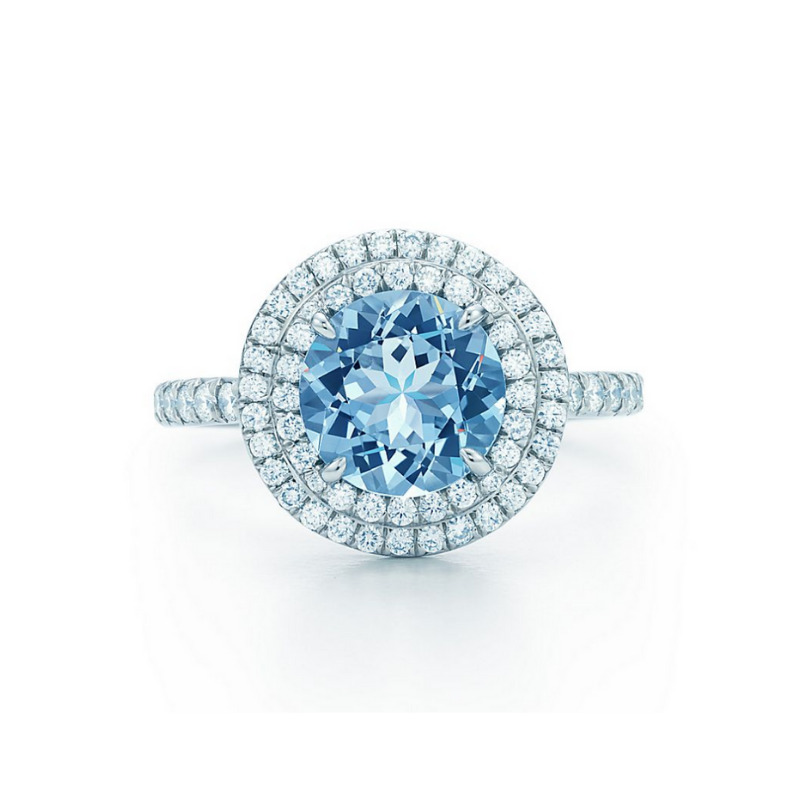 While aquamarines have always been popular throughout history, the feminine gemstone rose through the ranks when the Duchess of Sussex sported the stone on her wedding night in 2018. Designed in 1997 by Asprey, the ring in question belonged to her groom’s late mother, Diana, Princess of Wales, and was the perfect ‘something blue’ for the big day. Varying from the deepest blue to the palest turquoise, the stone is associated with youthfulness, health and hope. 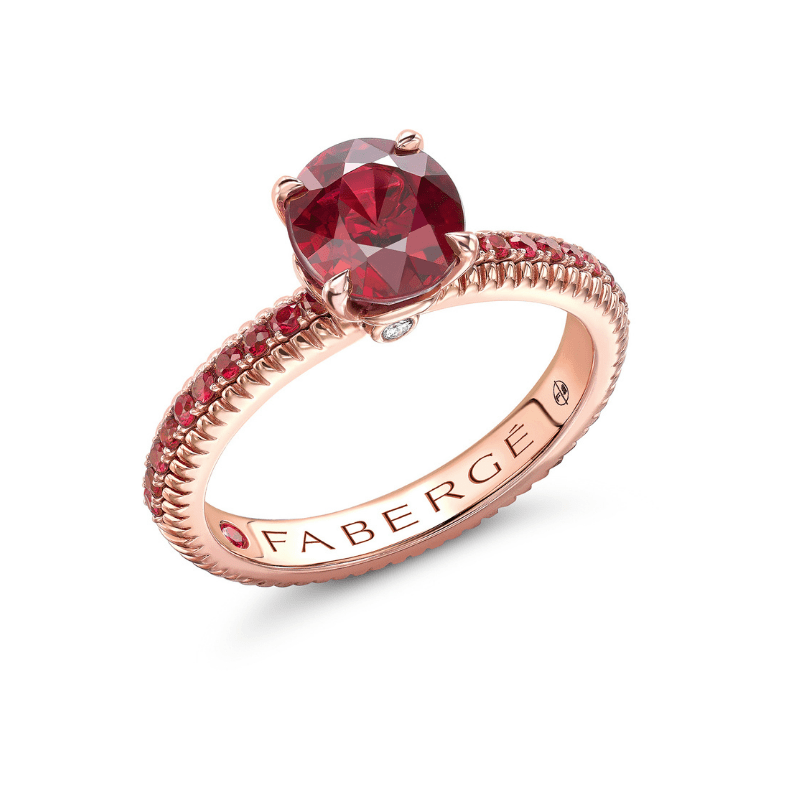 In Sanskrit, the word ‘ruby’ is ‘ratnaraj’, or ‘king of precious stones’, and thanks to its likeness to the colour of blood, numerous early cultures believed it held the power of life. Popular with European royalty and the upper classes to whom rubies represent good health, wealth, wisdom and success in love, today they have become some of the most sought-after gems for all the right reasons. 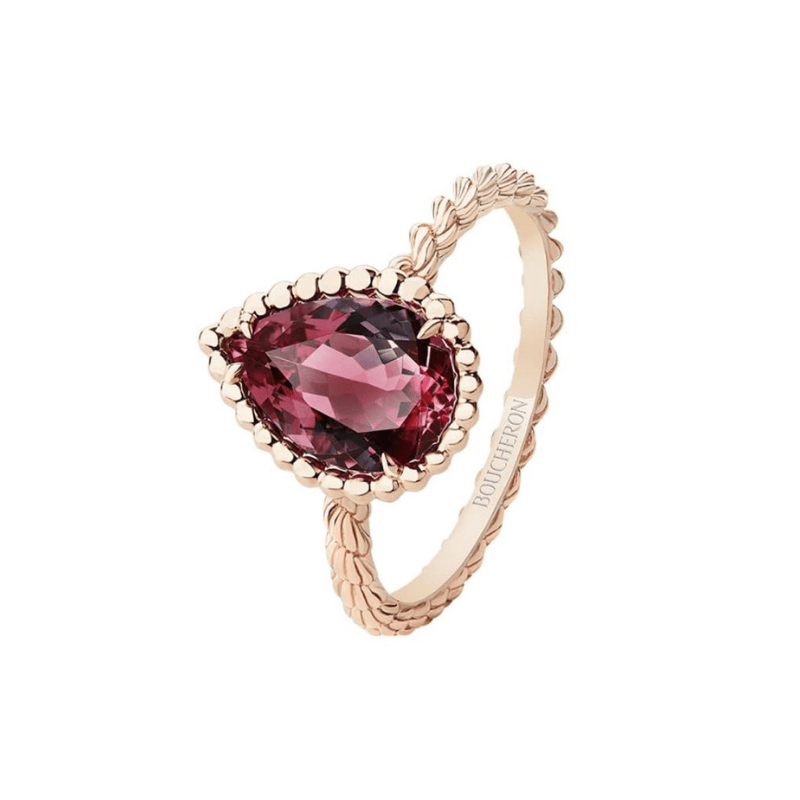 History saw garnets given as gifts upon departure for travel, resulting in the belief they grant quick, safe returns, and eradicate the emotional distance between those separated. An energising and regenerating stone, it is said to harness loyalty, drive, invention, confidence and personal success – the same qualities attributed to Capricorns and Aquarians born in January, who call the garnet their birthstone. 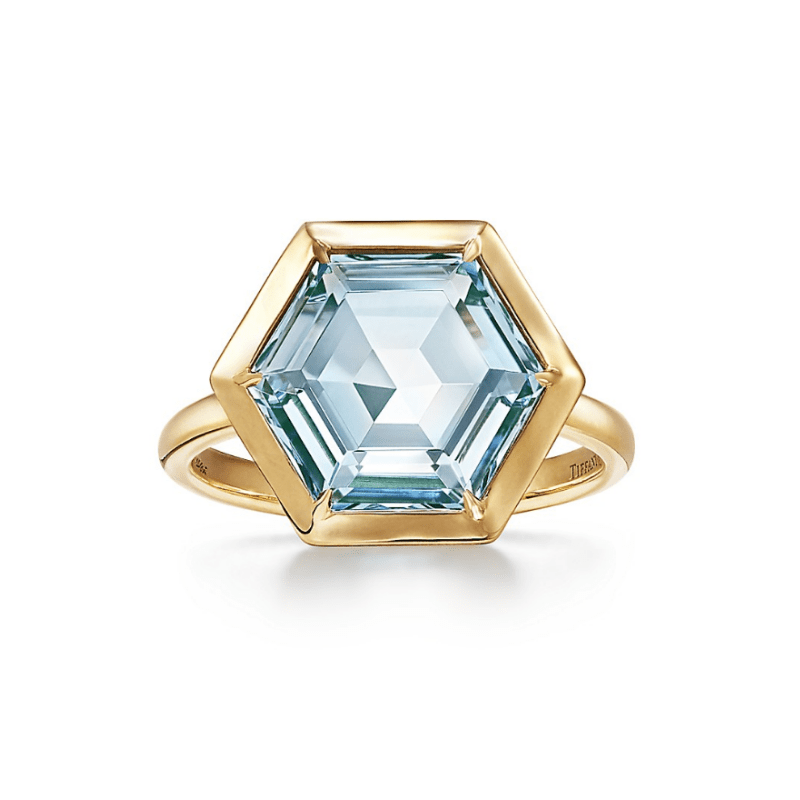 Early gem-cutters cited topaz as a stone capable of protecting against disease, strengthening intellect and lessening anger, making it a big deal among healers. Traditionally associated with fire due to its bright yellow-orange colour, it’s often set in gold as a way to bring its warm fiery glow even further to the surface. 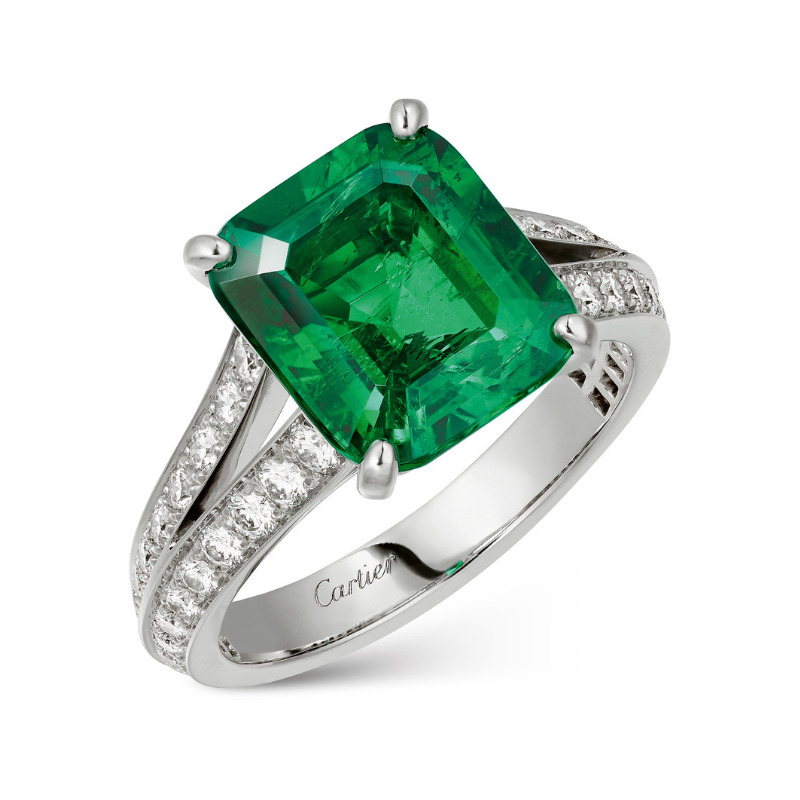 A favourite of Cleopatra, Princess Diana and Elizabeth Taylor – the former was said to have split one giant stone down the middle to give one half to her partner, Marc Antony, while keeping the other for herself, while choosing a coloured stone can have more meaning to the couple than a standard diamond engagement ring. 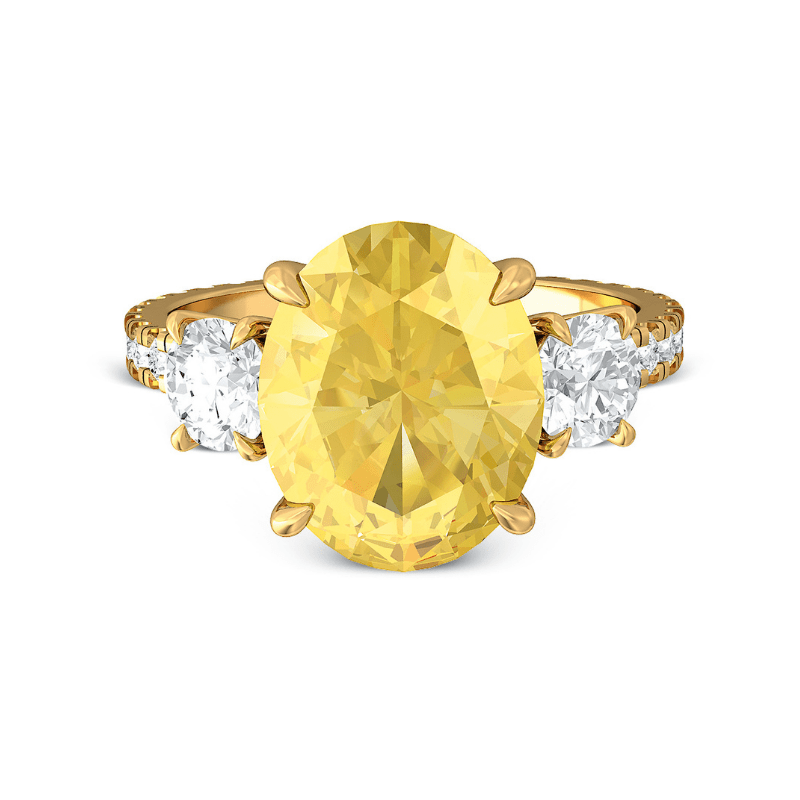 While the word ‘sapphire’ often evokes images of a stunning violet-blue gemstone (sapphire is Greek for ‘blue’, after all), this famous stone can come in any colour other than red – it all depends on the mineral content of the stone. Since the ancient times, the blue sapphire has represented a promise of honesty, loyalty, purity and trust, while its yellow-hued sister represents divine grace, power and happiness. No wonder it’s one of the most popular engagement stones of choice today.

Read Next: How Lab-Grown Diamonds are Redefining Luxury

Inside The First FRED Jewellery Boutique In The Middle East