Tumi: The Man Behind the Brand

Luxury travel brand Tumi is celebrating its 40th anniversary, and where better to celebrate than the world's largest travel hub, Dubai? Creative director of the brand, George Esquivel, agreed to meet us at the Four Seasons Resort Dubai to divulge more about the brand's celebratory '1975’ collection, as well as to explain what makes his designs, and himself, so successful. Sat in the private room of the resort's Coya restaurant, this shoe designer-leather fanatic-craftsman is sipping a Diet Coke (which he drinks obsessively, as we later found out) and regaling MOJEH.com with his charming, down-to-earth manner which hasn’t changed since his career first flourished in the early 1990s in his home state of California. 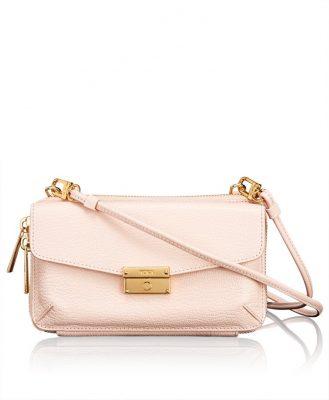 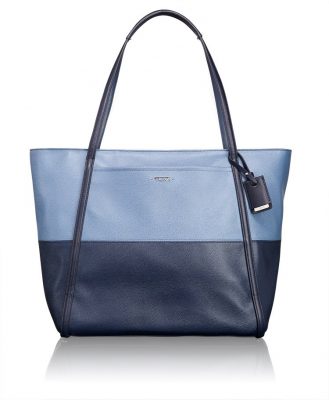 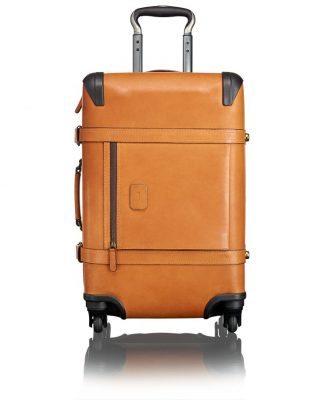 Has it been non-stop work since you arrived in Dubai?

I was at Art Dubai last night. It was so cool. When I got here they asked, ‘what do you want to do? Go to a bar or a restaurant?’ And I was, like, ‘what’s happening around here where I can see the culture of Dubai?’ There were some big artists there, but I liked seeing some of the local art. I get inspired by that.

Is there anything else you take inspiration from?

People ask me why I bring such big bags abroad. It’s because I like to buy things, like these MOJEH magazines. I will take these home and I already have 20 pounds of magazines from Paris! I also like to buy things when I go to galleries and boutiques, capturing whatever’s happening all around. The women here I noticed last night are very chic and the guys dress really well; it’s a different sort of style of dressing than in Paris, but it’s still very chic. So, I like to sit and take pictures of people; it could be what they’re wearing or how they’re wearing it. It’s the same brands universally but it’s adapted to the culture and the climate, which I like to see.

So you’ve flown here straight from Paris? Is your travelling schedule always this hectic?

Let me tell you my schedule since NYFW. I was in New York for Fashion Week as our bags walked the runway with Public School, really cool guys! We were there for a week, went home for five-to-seven days, then were in Paris for 10 days. Now I’m here in Dubai for five days, then I go home for seven days and back to New York for another week… and that doesn’t include the previous month, which was Hong Kong, Japan and everywhere else. That’s just for Tumi! I did almost 150 travelling days last year, but I love going home. People ask me my favourite place to go and I really enjoy going home.

What’s your go-to Tumi piece for jet-setting across the world?

The piece that never changes is a carry-on, because it gives me enough for two or three days in case my bags get lost. I may do a backpack or a duffel, it depends on what happens during the trip. 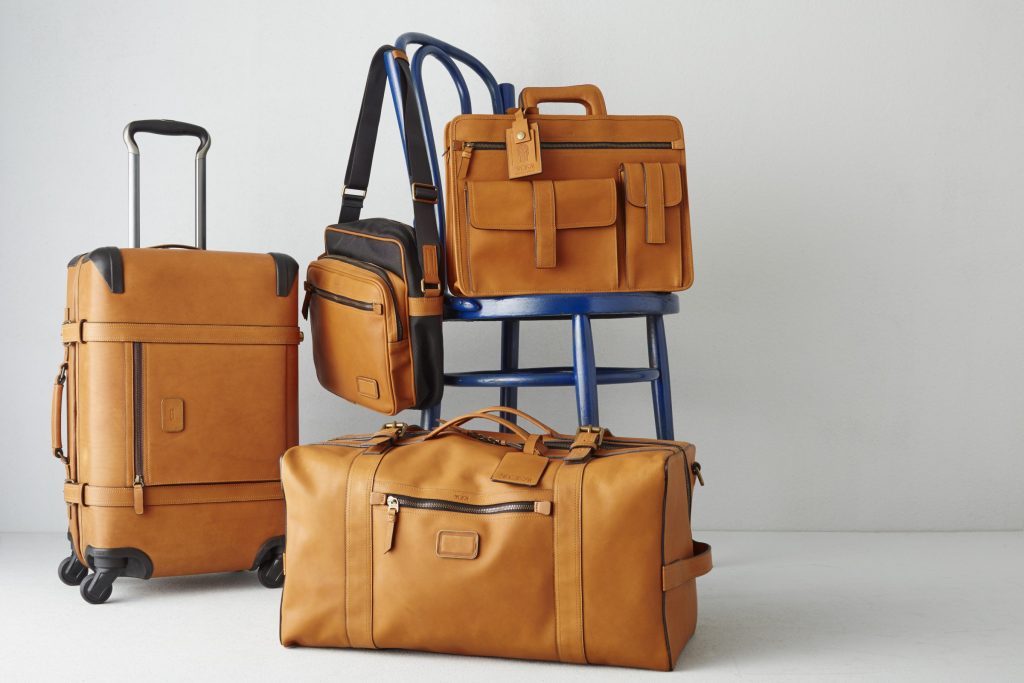 Has there been a specific moment when you thought, ‘this is it’?

Meeting Lisa Love was one; Anna Wintour having faith in me was two; and in terms of my career, becoming a creative director was very… [smiles and points at the beach] … you get to see things from a different point of view and get to see how companies of this size work and the issues you have to deal with, so that’s been very amazing as well. I would have to say the Vogue (Fashion Fund) aspect, not for credit for them, but if it wasn’t for them I would still be making shoes in my shop and now I’m doing this.

Do you miss the nostalgia of the shop?

I do sometimes. I miss getting my hands dirty but at the same time I’m also happy that this is the next phase. I’m still doing it on a certain level, I’m very involved with everything and even at Tumi I’m very involved in what we do. I might make a piece of leather and take it in and say: ‘guys this is what I want to do!’ It’s been a collaboration, some pieces are 20 percent me, and some pieces are 90 percent me.

Do you still have time to make things yourself?

I make my own watch straps.

Sure! [Wraps an original Omega dial with luxurious leather strap around my wrist.] See how cool it looks on a girl? I’ve always been into watches. I have lots of different straps. I cut this one myself.

Could we buy one from Tumi soon?

For Tumi, it has to fit within a travel lifestyle; we’re exploring different things, and we’re looking to do more outerwear that’s easily packable. We did a jacket that rolls into a neck pillow but it’s a puffer jacket; for women it’s a puffer jacket and a raincoat.

What’s the secret to Tumi being the best luxury travel brand?

These people (who buy Tumi) are professional travellers and so they want the best and I consider our bags to be the best. The wheels don’t break. The handles don’t break. [Smiles as if to say, ‘it’s as simple as that’.] Before I could afford Tumi I had bags that broke and ripped, I never understood why I loved Tumi bags so much until I got here and realized how much attention goes into making one.

How long does it take make one from design to production?

On a more personal note, what’s your favourite drink?

You didn’t want to admit that, did you?

It’s kind of weird. I collect Diet Coke bottles from every country I go to. I haven’t been to Russia yet, but it’s interesting as it all tastes different everywhere. Barcelona has really good Diet Coke! My wife moves them around; she’s the one that got me addicted to ‘diet crack’- that’s what it’s called in our house. Sometimes the bottles and cans are just piling up. I’ve got the Karl Lagerfeld collaboration bottles and the Jean Paul Gaultier, which are kind of cool.

Finally, if you had your time again, would you have taken a direct path into fashion?

It was pretty rough in the beginning and I’ve had many regrets, but if I could do it all again I would have gone to school. School, in my opinion, gives you that foundation. The first five-to-seven years in my design career was my school. On the one hand that’s the thing I would have changed but on the other hand not knowing and just doing it [shrugs]; I did it out of ignorance. I can remember an article written about me that said: ‘Good luck doing this, it’s one of the hardest things to do, making shoes in California by hand’. Eleven years later and we still have my workshop and we’re still doing it. Not giving up is what brought me to Tumi. And Tumi was found in the same way. Our founder wanted to make bags that last. Jerome [Griffith], our CEO, is the same and we make beautiful products. If you all have the same philosophy it works. 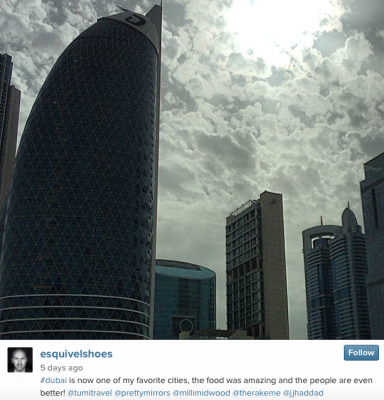 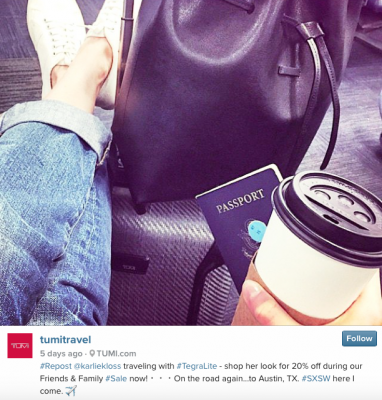 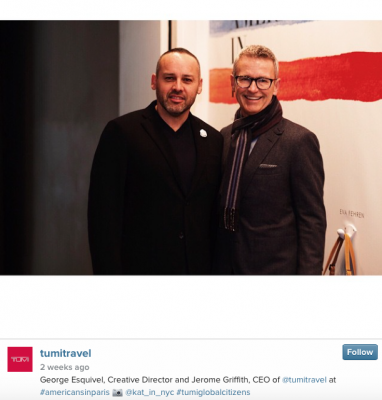 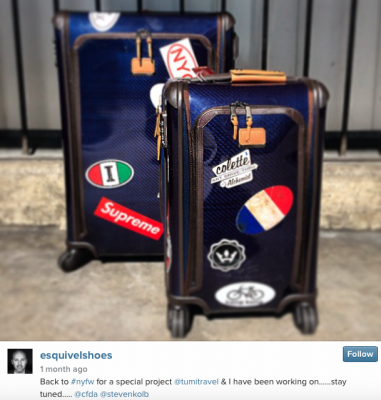 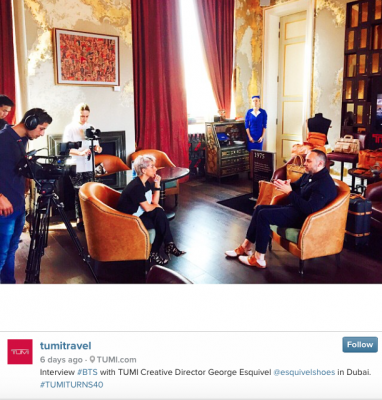