From the confident pieces from Ashi Studio that explore volume and colour, to the experimental edge of John Galliano’s louder than life prints, haute couture demonstrates creativity and exceptional savoir faire of the world’s most talented designers with imaginations to match. Prepare to fall in love with the visions of fashion’s favourite few. 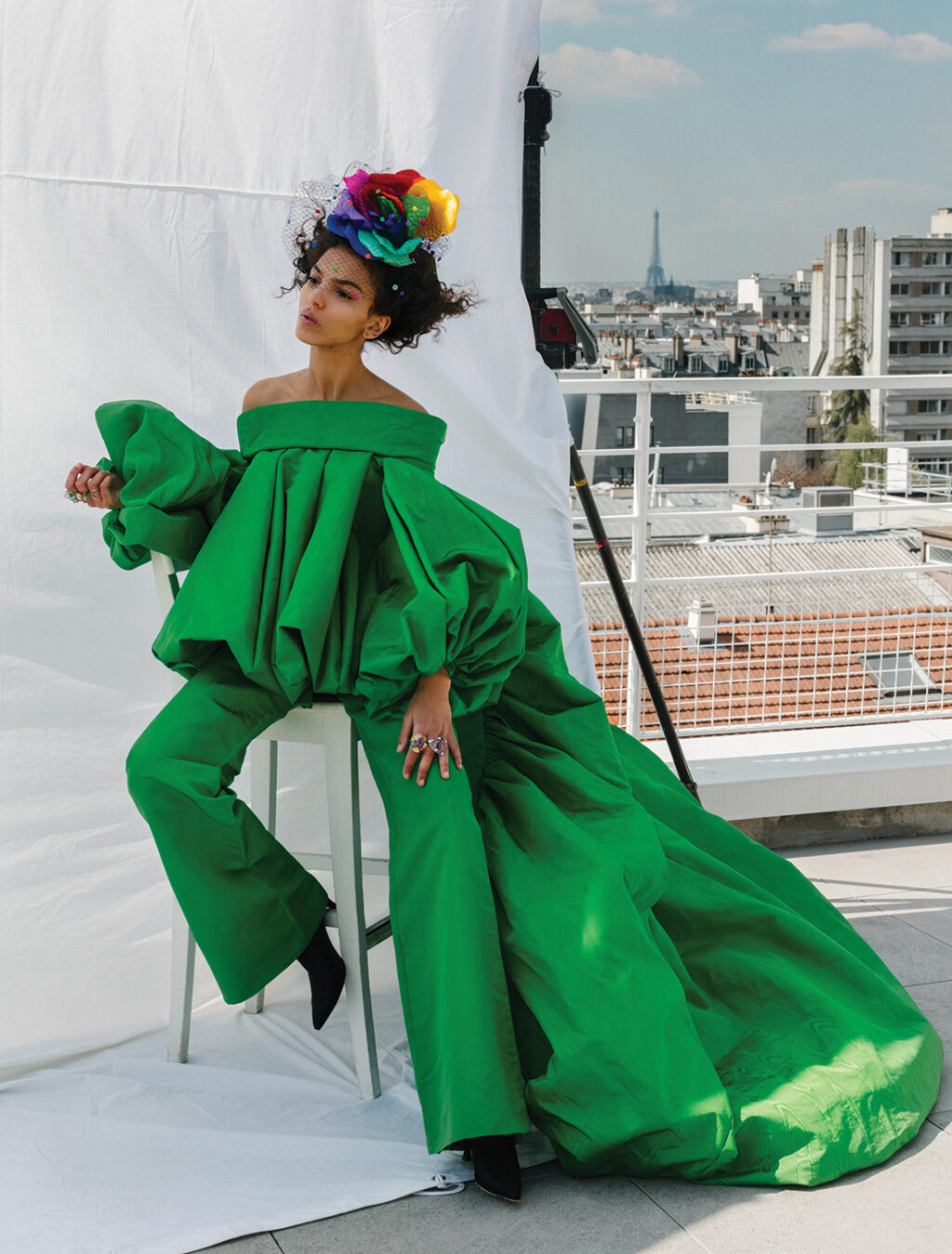 Titled Letters to Margaret, Ashi Studio’s S/S19 couture collection marks a step away from the Saudi Arabian-born couturier’s signature designs. Widely-known for his intricately embroidered pieces, Mohammed Ashi was inspired by the bygone eras of the 1950s and 1990s for his 27-piece collection, which featured a vibrant colour palette of hot pink, lime green and acid yellow, interspersed with classic black and cream. “A picture from the 1950s caught my eye in a book. There was something about the details and the movement that inspired me,” he reveals. “The direction of the S/S19 couture collection is different from previous ones I’ve done. There’s a harmonious mixture of a ’50s and ’90s vibe throughout.” With dramatic volume a linking factor of the collection, moire taffeta, lace and double satins were sculpted into huge ruffles and folds, adding theatrical flourish to capes, bodices and hemlines. Splashes of wild paintbox-bright colour punctuated an array of magnificently-plumed and ruffled gowns, with Look 8: a bell-shaped, voluminous off-the-shoulder top with a train, paired with slim-fitting trousers in lime green silk taffeta a fresh and fun example of the Beirut-based designer’s new vision of his glamorous, international client. 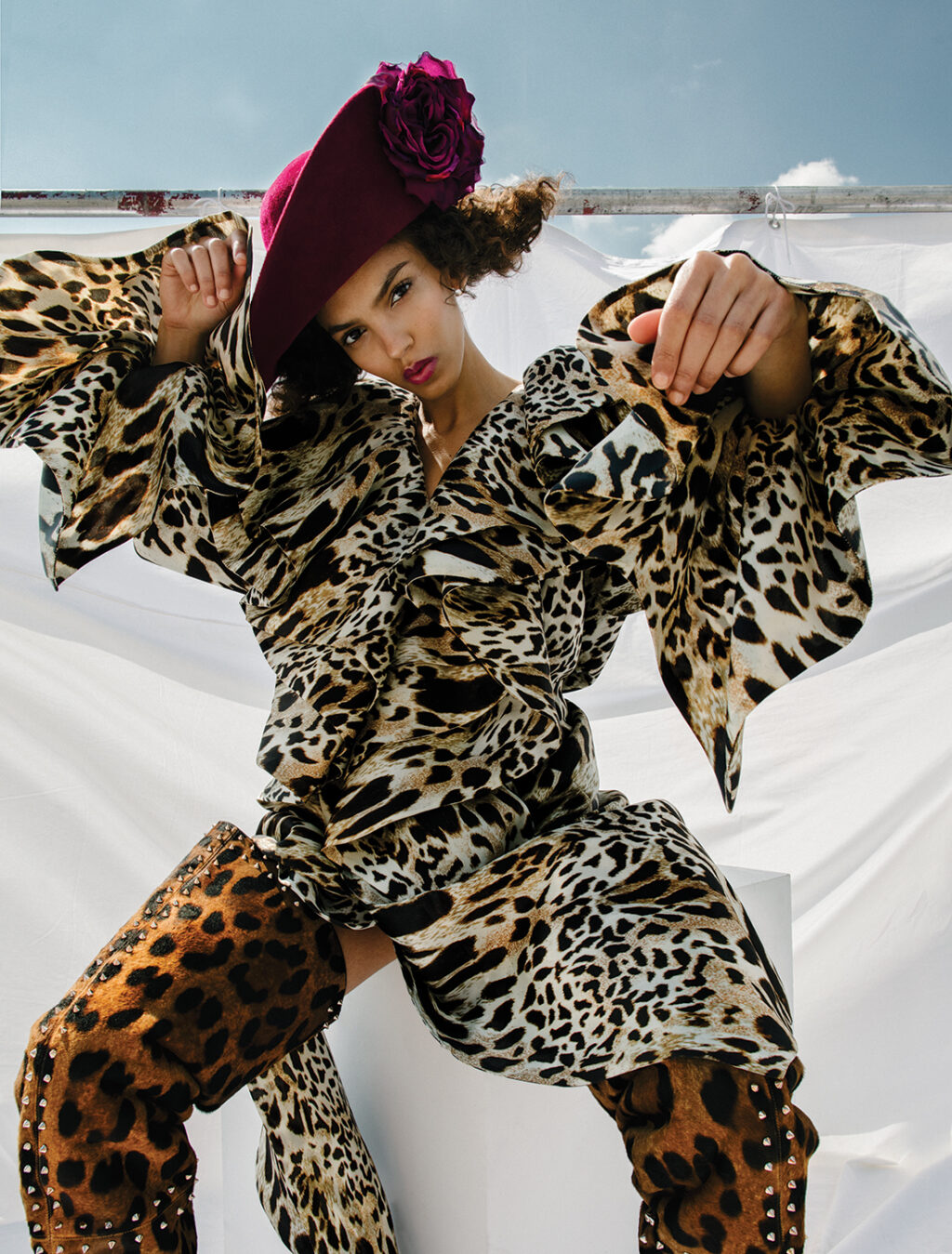 The Alexandre Vauthier show was so Parisian that every look paid tribute to the very essence of French couture: a nod to the handiwork of specialty ateliers. Even the soundtrack, classics by moody chanteuse Françoise Hardy, added an air of Gallic sophistication, and just enough poetry to soften the designer’s usual anarchic spirit. And that’s the thing about Alexandre: although he might be all high octane glamour, his eye, and penchant for detail are impeccable. His penultimate looks were a little more fluid and a lot more sensual – a clear tribute to the artisanal savoir faire of the Métiers d’Arts. There was a bolero jacket entirely hand-embroidered and worn over a white skirt; a beaded bustier pouf minidress tied with a taffeta bow at the top; and lashings of glamorous flourishes that were slightly 1960s-inspired – all paired with pearl ankle strapped heels or black-and-white ruched ankle boots from designer Amina Muaddi. Working with Maison Lemarié on a series of ruffled numbers, Alexandre’s pretty frills had a life of their own, creeping out of sleeves, gracing collars, and blossoming on minidresses in the most beautiful silk satin and sculpted taffeta. Lust-worthy show-stoppers that will most likely make their way on to Alexandre’s celebrity clients, Rihanna or Beyoncé. 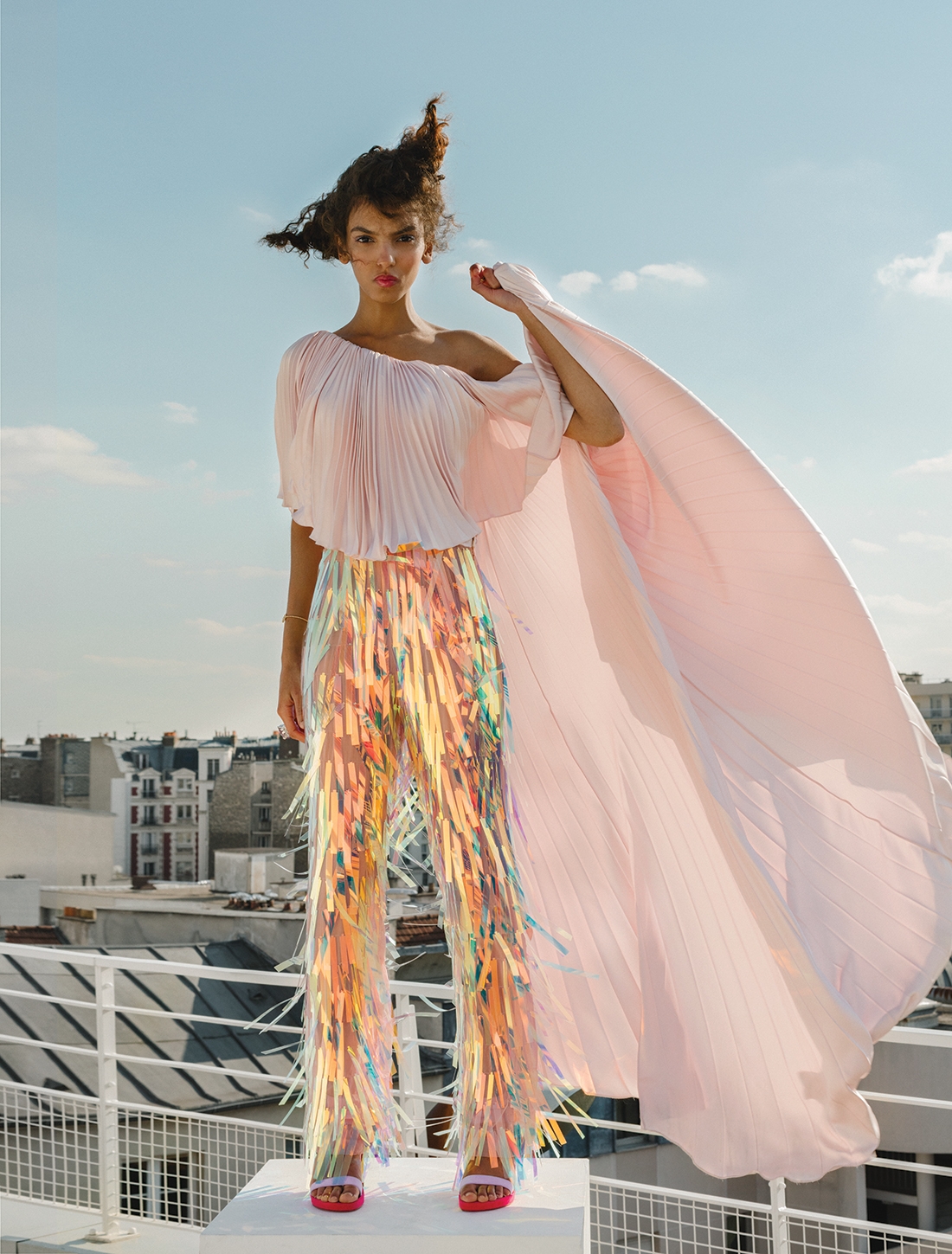 RALPH & RUSSO
A free pass to the imagination is the carte blanche that couture week gives designers. And for their S/S19 couture collection, Tamara Ralph and Michael Russo let their fantasies run free, all the way to vibrant and vivacious Latin America. A glance at their first sombrero-topped look, an acid green tailored suit with a metallic snake coiled around the waist, said it all: the Australian design duo planned on being as flamboyant and extravagant as they could be. A feast for the eyes, as well as the senses, thanks to the mariachi band that greeted guests on arrival, the show was filled with the eccentric and imaginative – a rich samba of 1960s pop colours, complete with pompom-fringed skirts, ostrich feather chiffon kaftans, a dress embroidered with beaded bananas, and another with heart-shaped cutouts. And it was all a tribute to the stylish legacy of La Doña, the beloved María Félix and Mexico’s most famous actress, whose eponymous daring sense of fashion and empowered persona made her one of the most revered stars of the Golden Age of Hollywood cinema. With such a lively character to reference, Ralph & Russo made sure to follow with the same unparalleled and alluring glamour, whether in bare-shouldered ballgowns and frothy tulle mini dresses, or the tailored safari suits they sent out in bubblegum hues and vivid greens. A fantastically exuberant collection, it was just as audacious and wonderful as the eternally enigmatic María herself. 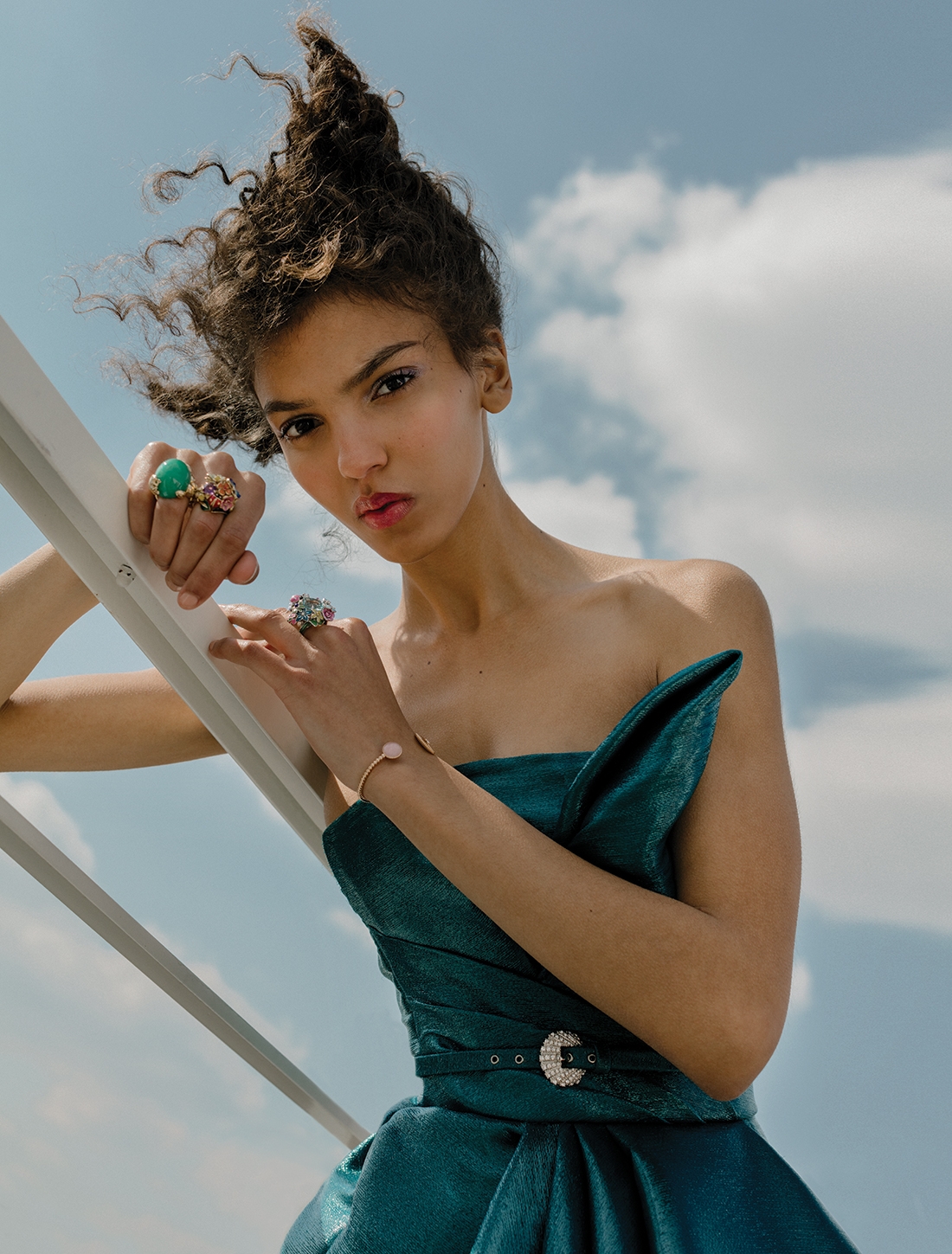 This couture season saw many designers look to the life aquatic, with underwater sea goddesses emerging from the waves and promenading onto land. One such designer who expanded on the sea life theme, was Lebanese legend, Zuhair Murad. The couturier dropped his design anchor in the ocean, plunged into the deep blue and scoured the sea bed for fantastical corals, luminous mother-of-pearl and tiny seashells, resurfacing with an aquatic treasure trove, which he took back to his atelier and transformed into a marinesoaked collection for sartorial sea nymphs to wear on the catwalk. Unleashing a tidal wave of signature red carpet gowns: ruffles rippled on evening dresses in pleated tulle and iridescent organza, while shimmery fish-scaled silhouettes dripped with azure blue dégradé sequins. And although Zuhair sent out quite the sparkly army, he kept the theme controlled, shying away from anything that was overtly literal. His mermaids, if you want to call them that, were strong and sexy, navigating between a rock star attitude and a somewhat softer romance. Their story played out through a series of sleek, figure-hugging pieces, exquisitely executed, with slits at the sides, some with billowy chiffon trains that floated behind and many, fixed with the same diamond-encrusted scallop-buckled belt, that changed colour with each look – from the blue-black tones of the deepest ocean to the luminous silver of its treasured mother-of-pearl. 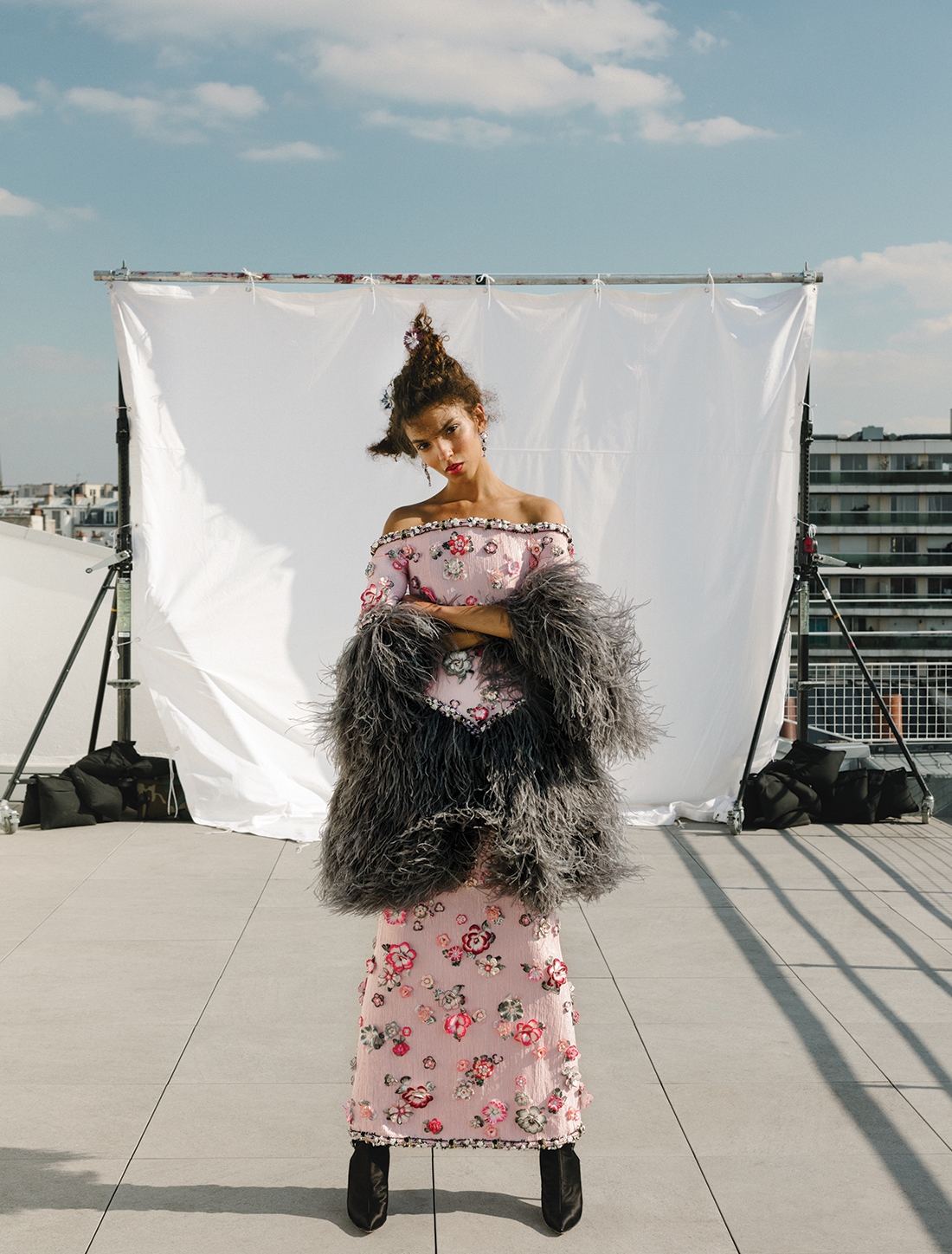 In what would tragically turn out to be Karl Lagerfeld’s final couture collection for the house of Chanel, the legendary German designer looked once again to his beloved 18th century for inspiration. Focusing on the recent Musée Cognacq-Jay exhibition La Fabrique du Luxe: Les Marchands Merciers Parisiens au XVIII siècle – which told the story of Parisian merchants who supplied luxuries like silk ribbons, gilded picture frames and sumptuous furnishings to the likes of King Louis XV’s tastemaking mistress Madame de Pompadour – the Grand Palais was transformed into a fantastical setting for Chanel’s S/S19 couture offering, reimagined as a Mediterranean villa, complete with palm trees, a garden and a swimming pool. Calling upon the exceptional skills of Chanel’s couturiers to recreate the exquisite porcelain flowers so coveted at the time, feathers, hand-painted sequins and dried flowers dipped in resin were applied to everything from lighter-than-air organza, chiffon and lace, to butter-soft leathers and handwoven tweeds. Slim, sharp-shouldered jackets and narrow-skirted dresses exploding into voluminous ruffles at the calf, or panniers of ostrich feathers at the hip, referenced a refined but elaborate 18th century silhouette. Requiring 315 of hours of work, and 6,500 elements by the Maison d’art Lemarie, the pale pink mermaid bustier dress, pictured left, and worn on the runway by Kaia Gerber, was embroidered with 330,000 pale pink sequins, enriched with hand-cut, hand-printed and individually enamelled pink, red and grey flowers, and finished with ostrich feathers dyed in three different shades of grey, pressed and glued by hand to a tulle base. 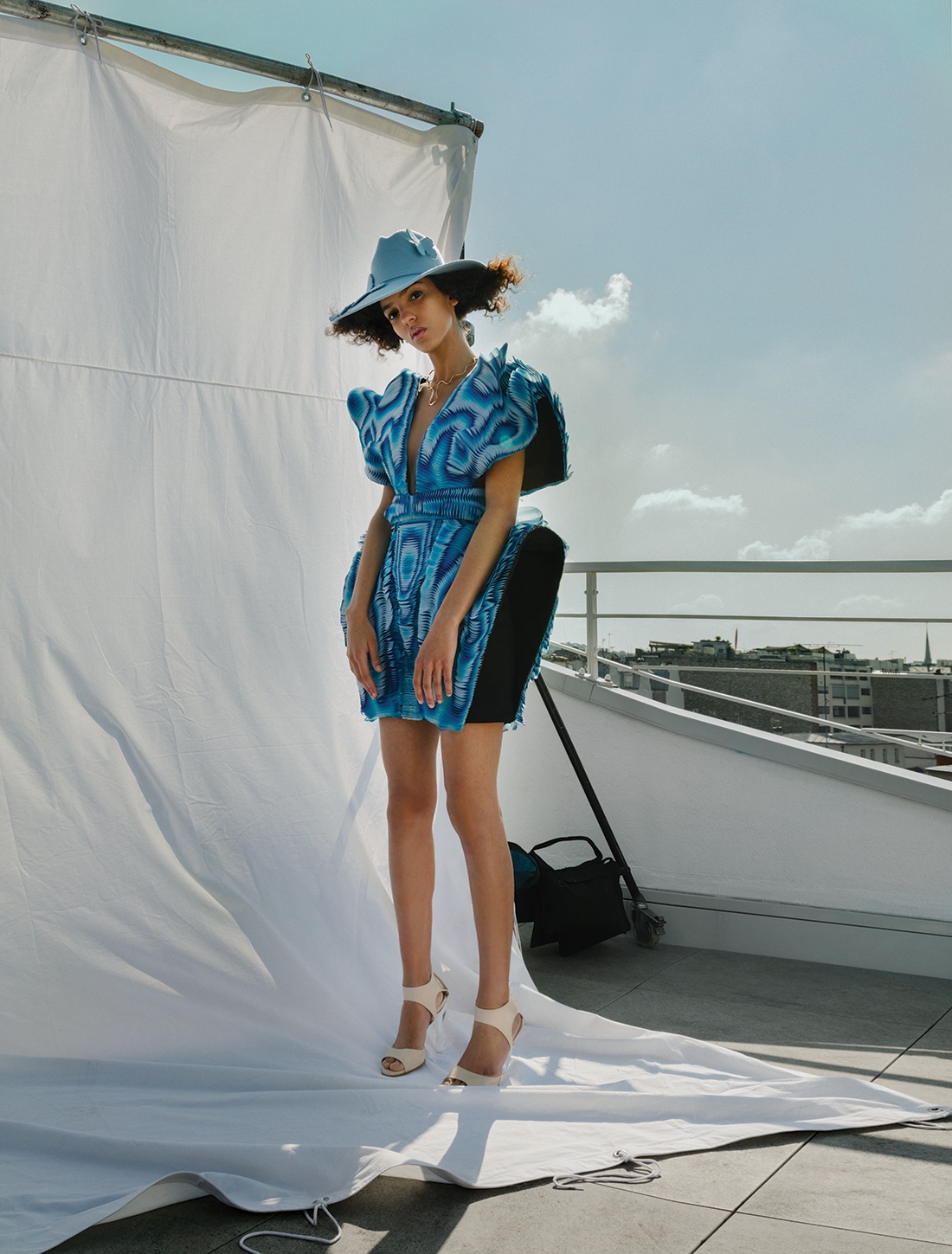 One of the first to employ 3D printing in her designs, Iris van Herpen’s fantastical creations are works of art in themselves. A voracious researcher, who finds her message at the nexus of historical, scientific, artistic, and futuristic references, and known as one of the most innovative designers in the fashion industry, the Dutch couturier cited inspiration for her Shift Souls collection from as far-reaching concepts as Harmonia Macrocosmica, a 17th-century star atlas, to the possibility of engineered human hybrids for S/S19. Acessorising her breathtakingly beautiful and impossibly complicated-to-construct gowns with one-off, 3D-printed, face-contouring jewellery called Cellchemy, 18 cloud-like dresses in translucent organza – a collaboration with New York–based artist and former NASA engineer Kim Keever – comprised an unusually colour-rich runway collection for the designer, who looked at the evolution of the human shape, its idealisation through time and the hybridisation of the female form within mythology for her frame of reference. The technique used to create Look 18’s Galactic Glitch dress (pictured right), saw cloud-printed aqua blue, gradient-dyed organza silk, 3D modelled in CAD software, which was heat-bonded to mylar and laser cut into the finest lace of thousands of 0.5mm ‘harmonica waves’. Each piece was individually stitched on to stretch tulle, creating a dance of quivering echos that optically distorts the body.