The Collection: Back to the Future with Louis Vuitton Cruise 2020

For Louis Vuitton, the dawn of a new decade signalled a trip through the eras, in a cruise collection which celebrated the clichés of New York

There’s an ongoing debate over the necessity of cruise collections — the elegance of air travel has faded, and the jet-set clientele have evolved. But for Louis Vuitton, a house founded on luxury travel trunks, the mid-season collection is pivotal to the brand’s travel-focused DNA.

It therefore feels appropriate that for cruise 2020, Louis Vuitton’s creative director, Nicolas Ghesquière, embarked on voyage across the Atlantic to stage a far-flung spectacle at a former aviation terminal in New York.

Designed by Eero Saarinen in 1962, the historic TWA Flight Centre at JFK is a visual marvel – a wing-shaped building that could easily be mistaken for time travel transportation or a UFO from outer space. Built during the glamorous heyday of airline travel, the retro terminal closed almost 20 years ago but has been recently reborn as a luxury hotel. 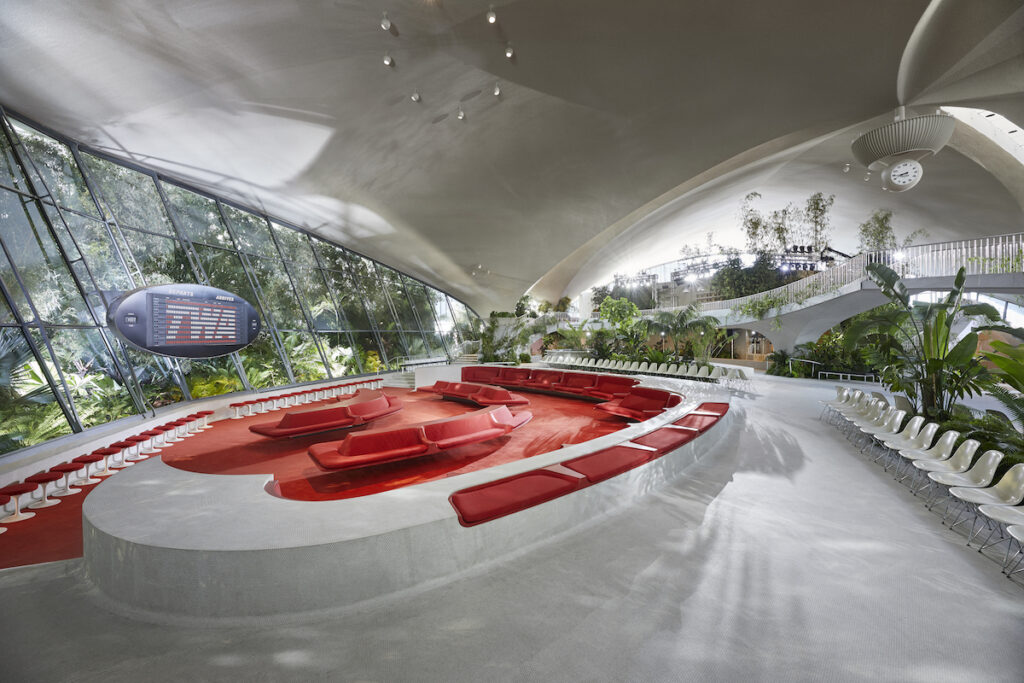 Inside the TWA Flight Centre at JFK before the show

For Ghesquière, who has long been obsessed with architectural design, the bird-like building symbolised both the beginnings of the brand and his own journey into New York, when he landed at the flight centre in the early nineties.

With guests carried back to both Saarinen’s vision of the future and Ghesquière’s first impression of the city, the setting proved the perfect backdrop for a collection which blended the concept of time in a fusion of past, present and future.

Models emerged on the runway — with an old-school departure board ticking behind them — in a mash-up of motifs; there were stewardess-short hemlines, lace-trimmed capes and exaggerated batwing shoulders. While TWA-inspired flight bags suggested 1960s, flouncy miniskirts signalled a 1980s revival, heavy duty boots read 1990s biker-chic and clinched brocade corsets with puffed velvet sleeves sent a nod to the Renaissance. 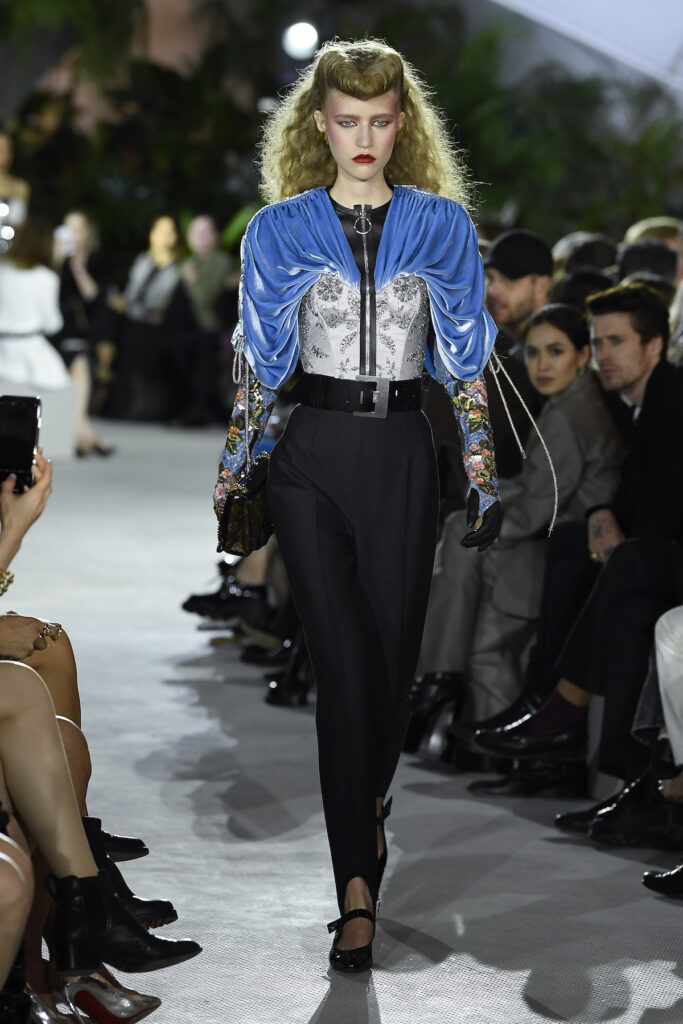 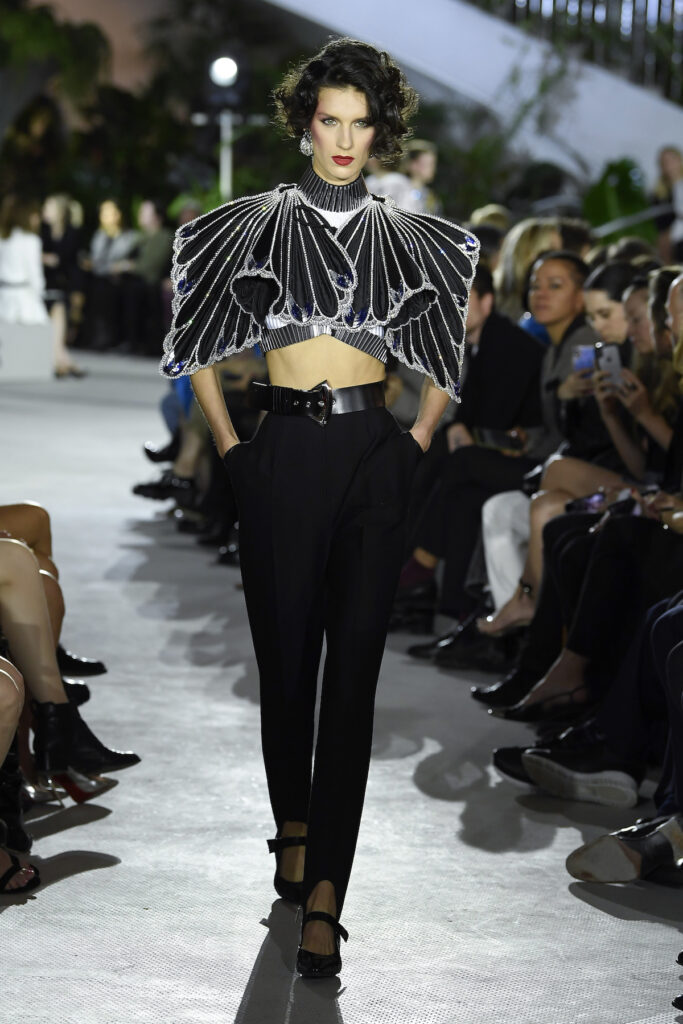 Weaving in and out of decades, Ghesquière also made a case for high-tech accessories of the future with a flexible OLED digital screen handbag built into Louis Vuitton’s signature Monogram style. The shuffe of eras created a fasting-moving carousel of time, but within the timeline shift there was a significant nod to the city that captured Ghesquière’s attention in 1991; cue a montage of New York.

Bowled over by the bright lights and round-the-clock energy of the Big Apple, Ghesquière wanted the collection to tell the narrative of the first feeling he had when arriving in New York City. 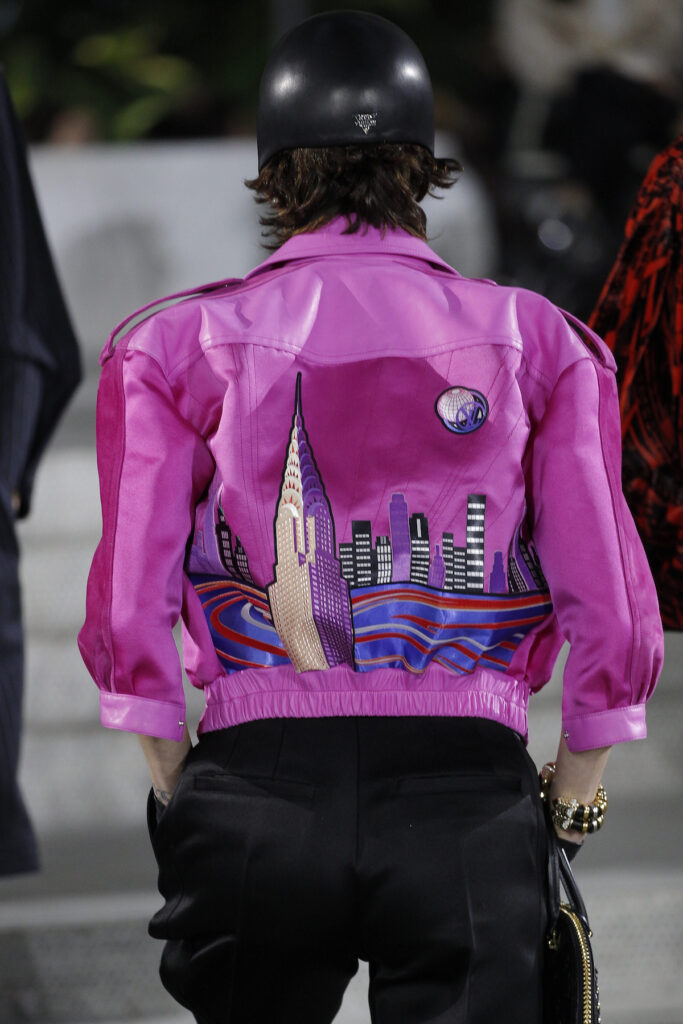 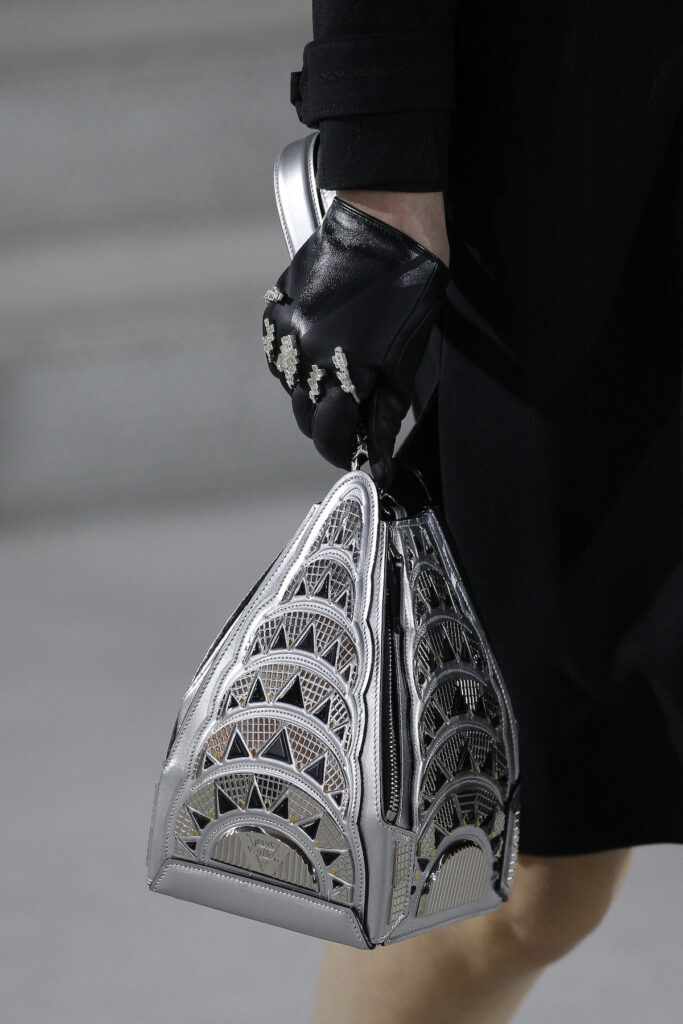 Told through the eye of the curious tourist, Wall Street pinstripe uniforms, superhero silhouettes straight from Gotham and jackets emblazoned with the high-rise skyline revealed an amalgamation of French flair and American streetwear.

The city’s Art Deco influence, particularly the famed Chrysler Building, was reimagined in glittering souvenir- style handbags and embroidered jacquards in metallic shades paired with contrasting combat boots. A punch of acidic colour painted the nighttime glow of the concrete jungle in a cruise presentation that wasn’t afraid to confront the many clichés of New York, in fact it embraced them.

Cruise may be a sales-driven season, but this collection certainly favoured fantasy over reality. Ghesquière’s argument is: you have enough easy-to-wear pieces – what you really need is a space-age corset paired with a cutting-edge flexible screen handbag and jacket that gives a nostalgic nod to New York – after all, we are stepping into the future.