Inspired by the same superstitions that stayed with Monsieur Dior throughout his life, Maria Grazia Chiuri speaks to MOJEH about her Dior haute couture spring/ summer 2021 collection, which promises a much-needed moment of escapism

The first time Christian Dior met a fortune teller, he was just 14 years old. A tale that has now become ingrained in the history of the Maison, in 1919 a palm reader told a curious young boy in a seaside town in Northern France that even though he would fall on hard times throughout his life, he would be destined for great things. “You will suffer poverty,” she said, cited by the designer in his autobiography Dior by Dior. “But women are lucky for you, and through them you will achieve success. You will make a great deal of money out of them, and you will have to travel widely.”

Whether or not you share the designer’s faith in clairvoyance, there’s no denying that these visions came true – Dior went on to found one of the biggest Haute Couture houses in the world, after all. This appetite for mystical guidance followed the designer well into adulthood, with his trusted fortune teller Madame Delahaye guiding Monsieur Dior on many key decisions throughout his life and career. Rumour has it the one time he ignored her advice was when he took a trip to Montecatini, Italy, during which he tragically died from a sudden heart attack. Delahaye, they say, warned him not to go. However, right up until that very day, Dior would also carry a handful of talismans, including a pair of hearts, a sprig of lily of the valley, a gold star, a four-leaf clover, and a piece of wood on him at all times, which he would touch for good luck. Because of this, many of his collections also took a magical turn, with his designs named after card games, superstitions and stars. Case in point? In spring/ summer 1950, the Tour de Cartes (card trick), Trèfle à Quatre Feuilles (four-leaf clover), Cartomancienne (card reader), Fétiche (talisman) and the Fer à Cheval (horseshoe) all made an appearance. Dior dress names have included the Ligne de Chance from spring/summer 1951, translating to ‘fate line’, and the Bonne Étoile (lucky star) from spring/ summer 1952.

Fast forward to 2021 and the same fascinating world of the divinatory arts has provided the source of inspiration for Maria Grazia Chiuri, who looked to the Visconti-Sforza tarot deck – the world’s oldest existing deck from fifteenth century Italy, originally created as playing cards for the noble elite – for her Dior Haute Couture spring/summer 2021 collection. “Christian Dior believed in destiny and signs of fate,” the creative director tells MOJEH. “Early in his autobiography, he reveals his loyalty to the fortune tellers he consulted regularly. I appreciate his sincerity, and I too am fascinated by the world of divination. That’s why I wanted to reference, in my collections, the symbols that Monsieur Dior loved and considered magical.” Reimagining their mystical characters and symbols through a magical collection that took these motifs to the next level, each of the tarot cards is represented by a couture ensemble, from a golden jacquard dress for Temperance and a midnight metallic gown for the Star, to a playful, multicoloured mini dress for the Fool.

A romantic assembly of billowing fabrics, flowing floor-length capes and old-world-inspired gowns, Grazia Chiuri enlisted the help of artist Pietro Ruffo, a regular collaborator of the House, to reinterpret the 78 tarot symbols for the collection, with nuances of each card becoming lifelike in the form of whimsical fabrics, exquisite techniques and intricate embroideries. Highlights include sweeping opera coats emblazoned with lobsters and lions, a plissé gown embroidered in crystals, and jacquards sprinkled with stars, which all recall the aristocratic taste and opulent lifestyle of the Visconti-Sforza families. “For this collection I focused on tarot cards, which represent a kind of cryptic dictionary of the world,” enthuses Grazia Chiuri. “I admire them for their poetic beauty, but also because they construct a narrative that evolves over time and according to our frame of mind.”

In the staging of these Haute Couture collections, Italian director Matteo Garrone brought the characters to life through a short film, Le Château du Tarot, set at the castle of Sammezzano in Italy’s Florence region. Opening with a fortune teller inviting a curious yet sceptical young girl to pick a card, this act marks the beginning of a journey through the majestic castle through which she meets the various characters in a dreamlike state. An engaging and creative piece of escapism for these current uncertain times, while this manifestation is proof that couture remains the ultimate territory of experimentation and possibility, Maria Grazia admits that to be truly appreciated, couture must be viewed both up close and personal. “In this film and in the research, we decided to express the characters not as a stereotypical view of tarot, but more like a fairytale, in some way,” she tells MOJEH. “The language of a film is completely different to the language of a runway. The film is the best way to express the dream of couture, but not the best way to show the couture collection. You have to see it up close, in real life. Right now, the only option we have is to give the story and emotion.” 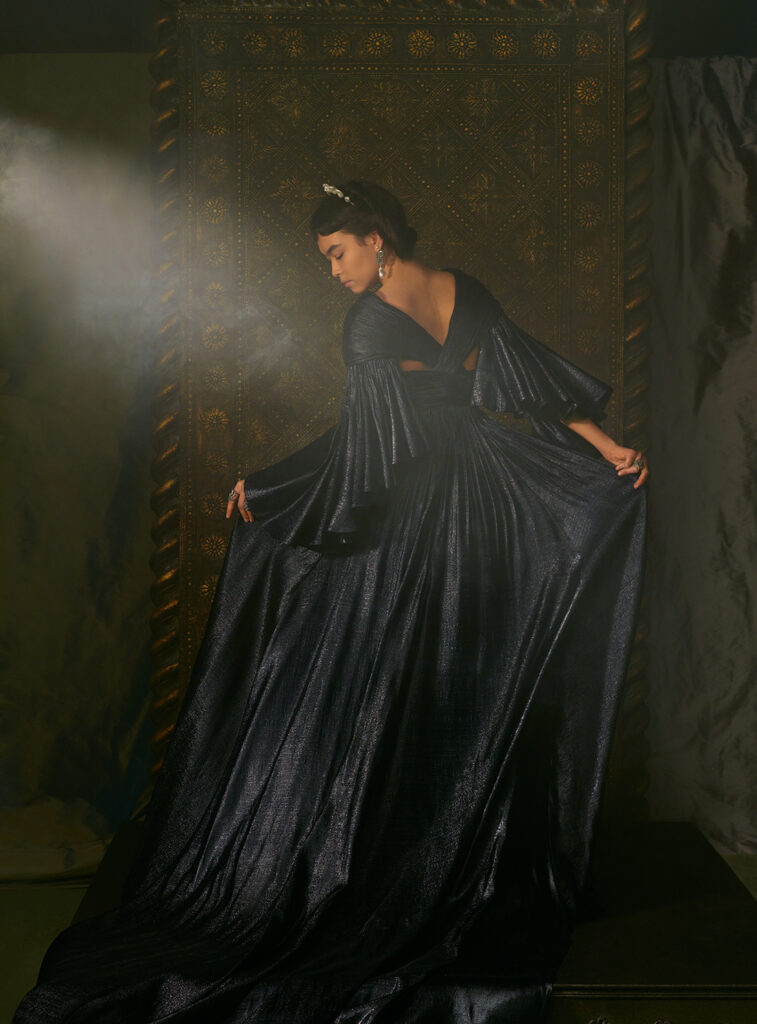 This is not the first time Grazia Chiuri has been inspired by the theme of divination since she joined the house in 2016 – it was clear from her very first couture collection, where we saw a magnificent taffeta evening gown that evoked the theme of the tarot, and her famous Constellation dress was represented by signs of the zodiac including Cancer and Aries. Perhaps most persuasive, for cruise 2018 she incorporated images of Motherpeace’s feminist tarot cards on varying looks, alongside a number of international pop-up stores, where the beautiful illustrations were on display alongside pieces from the themed collection. However, when asked to describe her inspirations around specific looks for spring/ summer 2021, there’s another favourite of the House that also comes to mind: gold. “Gold embodies powerful symbolism,” she explains. “In traditional alchemy, it represents the stable element par excellence, the materialisation of light and perfection. For the House of Dior, gold transforms from symbol to code, and in its various shades embodies the opulence and resilience of an iconic perfume such as J’adore – a veritable golden elixir – as well as the divine grace that naturally inhabits Dior’s extraordinary name itself, as it contains the French word for ‘gold’.”

Perhaps in tribute to the gold star tarot card Dior stepped on back in 1946, which would go on to be his lucky charm for all those years that followed, this luxurious metal has also inspired an abundance of the Maison’s couture collections over the years. Set against a floral backdrop at 30 Avenue Montaigne, during the autumn/winter 2019 show one model even took to the runway in a solid gold box that appeared to be a replica of Dior’s Paris Maison – yet this season it plays an even bigger part. Think, a gold jacquard cape, extravagant gold trousers and the new interpretation of the Miss Dior dress – which includes gold lamé rouleaux embroidery with an appliqué of small, embroidered gold lamé motifs that took a team of couturiers 800 hours to complete – it becomes a hue that glistens in all its glory. “Such aristocratic grace is precisely at the heart of the collection: gold triumphs in precious fabrics and fil coupé lamé; it illuminates silk shantung with dazzling shine; it reveals unexpected luminescence on sumptuous velvets; it completes superb plastrons based on Pietro Ruffo’s sketches, finely embroidered by the House’s petites mains,” Grazia Chiuri adds. “Above all, it transforms the Miss Dior dress into a unique creation, halfway between a garment and a jewel.”

Dior is certainly not the only couturier to lead a life governed by superstition. Gabrielle Chanel cited five as her lucky number, Yves Saint Laurent believed any fabric that his bulldog Moujik sat on would become the collection’s best-seller, and Riccardo Tisci follows the number 17 and carries a tarot card with the name ‘star’, which promises success and prosperity. The same beliefs have also been reinterpreted by the Dior’s many creative directors through the years, including Gianfranco Ferré who, among other symbols, crafted playing card motifs on dresses and scarves. Once more drawing the whole collection together, it remains true that the imprint of Dior’s superstition has left lasting traces at the couture house, and will continue to do so for years to come. Especially relevant for today, a time when the idea of magic can offer comfort and instil hope for a brighter future, Grazia Chiuri has signed another stunning chapter in the mesmerising world of Dior Haute Couture, and it’s most definitely one for the books.