Haute Couture Week is done and dusted, but it’s clearer than ever the the future of fashion’s most exclusive sector is changing for the better by reshaping trends for a new generation

There is nothing in fashion more exclusive than Couture. With only a small number of Houses officially designated to make Haute Couture collections, and pieces — which cost up to six figures to buy — taking hundreds or thousands of hours to produce, largely by hand, its miniscule client base is something in the realm of the low thousands worldwide. Yet with AW22 Haute Couture Week recently coming to a close, there’s reason to argue that it’s a world that is slowly changing. Balenciaga and its maverick creative director Demna, for example, have just opened a revolutionary Couture shop, with certain looks from its most recent show immediately on sale. Described as a “gateway to Couture, which remains a very closed universe, especially for new generations”, customers can simply make an appointment, try on gowns, have them altered and then purchase on site.

From working with a younger generation of creatives who are able to bring fresh ideas to the table, to incorporating more sustainable, environmentally-friendly and vegan elements into their collections, a select number of designers are looking to turn Haute Couture on its head, while keeping the element of uber-luxury and exclusivity alive and well. Take Maria Grazia Chiuri, a designer who has always had meticulous attention to detail. For 2022 she took things one step further by collaborating with celebrated Ukrainian artist Olesia Trofymenko, whose work she recently encountered at Rome’s contemporary art museum MAXXI. Falling hard for Trofymenko’s ‘tree of life’ motif, not only did Chiuri enlist the artist to create the large multicoloured artworks that appeared in the garden outside the Musée Rodin, where the show took place in July, but the tree’s branches, trunks and roots also appeared through the collection, embroidered by Dior’s ateliers on silk coats and cotton day dresses. 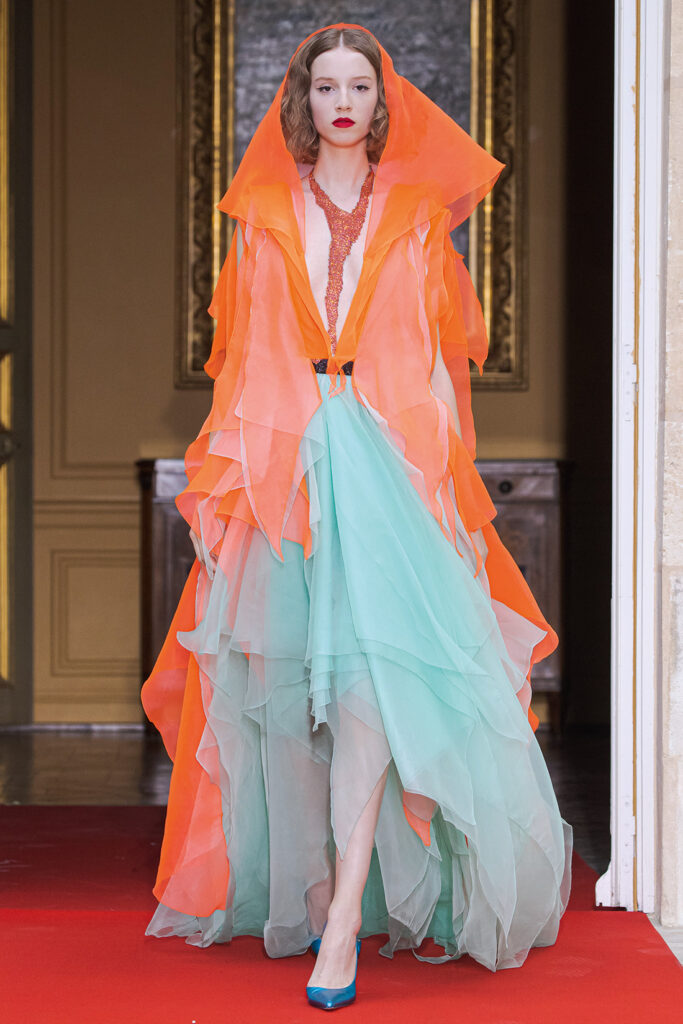 As Chiuri knows all too well, using artists and lesser- known creatives not only sets collections apart from the crowd, it also gives Couture that added element of timelessness, feeding into the idea of a collector’s piece. After all, more than anything else in fashion, these are pieces designed to be passed down from generation to generation. Furne One, founder and creative designer of Amato Couture, couldn’t agree more. “Collaboration will be the biggest trend in the fashion industry and we are already witnessing it in front of our eyes,” he tells MOJEH. “There are so many talented designers and artists I would love to work with, especially the younger generation who have a different perspective of the world. I would love to see how I can communicate the past, be present and, at the same time, predict the future in all my upcoming collections.”

Perhaps the biggest change we are seeing right now is in the realm of sustainability. Known for heavy embellishments and extravagant constructions, there are some who’d argue that couture is not sustainable. However, timeless rather than trend-led and free from the need to mass produce, these collections are the antithesis of fast fashion. Going one step further, we are seeing more and more designers taking their love for the environment to the extreme, with 2022 being the perfect example. “Sustainability is the only way fashion can move forward,” explains One, a man who has been practicing slow fashion and upcycling since the very beginning. For his AW22 Couture collection the Filipino designer created an ocean-inspired suite to raise further awareness on the importance of water and its use in the fashion industry. “I wanted to make a statement about encouraging the industry to be mindful of the environmental impacts of creating fashion,” he explains. 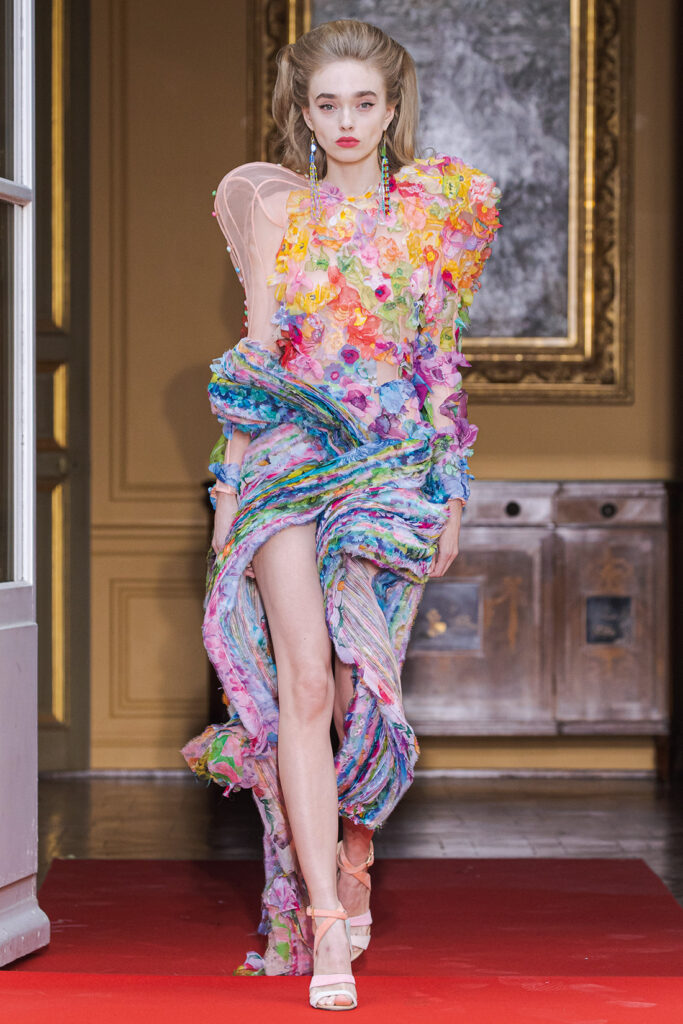 Ronald van der Kemp and Iris van Herpern are also among the crew of couturiers working to disrupt the industry through their sustainable practices. The former has been upcycling since 2014, and for 2022 — his first physical show in Paris since January 2020 — the Dutch designer constructed his collection from deadstock fabrics and archive scraps, even reworking old looks from past collections for the new customer. Not someone to balk at a challenge, for one of his looks van der Kemp resuscitated a trove of 1970s silk mousselines from a now-defunct company, which he shredded and used to drape across an organza mini dress. Another dress was crafted from the remnants of a piece once worn by Naomi Campbell. “Couture in the old days set an example for the world, and I want to show that we don’t have to always make a new trench coat every season and change the button here and there,” he said backstage at his show. “If you present clothes in a different context, they become new again.”

As for van Herpern, who marked her 15th anniversary this year, the pioneer of progressive and experimental Haute Couture is reshaping the industry for a new generation by working with architects and scientists to develop new, more eco-conscious fabrics that eschew tradition. Blurring the boundaries between art, fashion and technology, the 3D printed fibres used to create a jumpsuit for her most recent collection were made from cocoa beans, while a futuristic gown was made of bananas turned into biodegradable fabric and combined with raw silk. Her boundary-breaking designs are also a major draw for the A-list crowd, with everyone from Winnie Harlow to Lady Gaga among her loyal fanbase.

“Couture creates value and that is what makes it independent of fashion trends,” concludes One. “But with the evolving market and changing expectations of our clients, the industry is shifting to explore and experiment with collaborations, while gearing up to become more sustainable and technology-driven. This adds an extra element of timelessness to the world of Haute Couture, which is set to be passed down from generation to generation.” It’s just a matter of time until these practices becomes the norm, and they can’t come soon enough.

Read Next: Thirteen Key Trends From The Autumn/Winter 2022 Catwalks