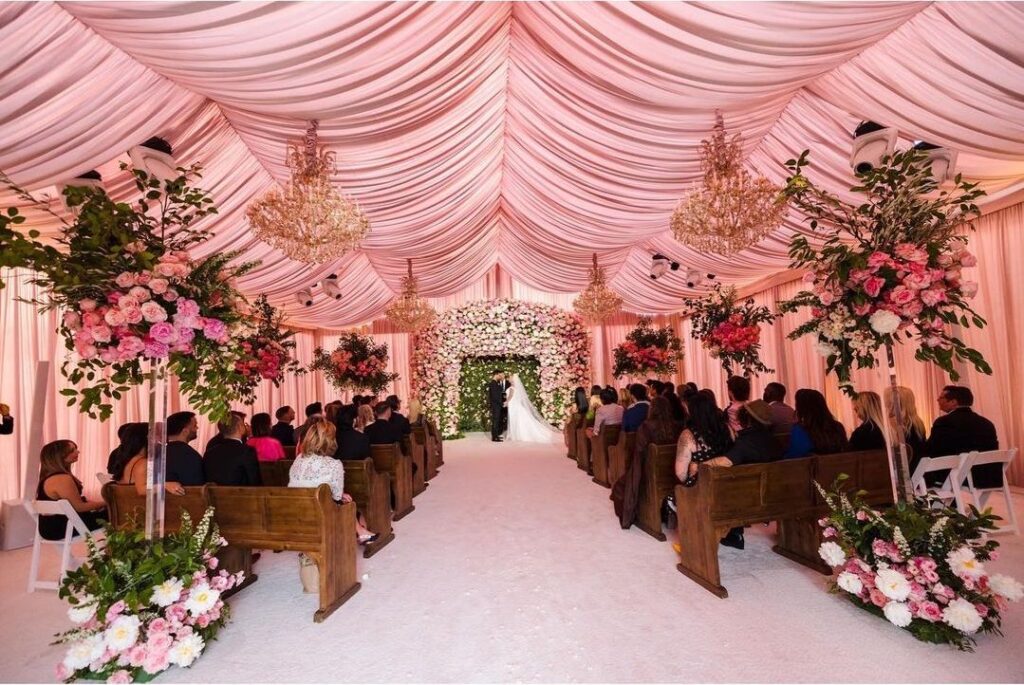 Congratulations are in order for Britney Spears! The Princess of Pop tied the knot this weekend, donning four Versace looks for the occasion

Britney Spears is a married woman! Seven months after being freed from a conservatorship, Britney has tied the knot with partner of six years Sam Asghari. She first met the actor on set of her Slumber Party music video and the pair got engaged in September 2021; Sam proposed with a 4-carat brilliant-cut diamond solitaire ring with “Lioness” engraved on the inner band.

The wedding took place in a tent stationed outside of their Los Angeles home and the bride arrived in a horse-drawn carriage. The outside was draped in blush fabrics, while the interiors were equally romantic: pinks, reds and whites came together with beautiful blooms to create the dreamy setting. In addition, the couples’ home was covered in pink roses and intertwining vines for the occasion.

Versace dressed the bride and groom for the nuptials – the collaboration was not a surprise since Britney let it slip to her 41 million followers earlier this year. Sam wore a black tuxedo while Britney donned a white off-the-shoulder gown complete with thigh-high slit, cascading 10-foot train and classic, satin-edged white veil. She completed the look with pearl-embellished gloves. After the ceremony Britney changed into a black mini blazer dress, lime-green ensemble (which she sneakily debuted on Instagram days before the wedding) and tasseled red minidress, all created by Versace.

The finishing touches were provided by Charlotte and Sophia Tilbury and jeweller Stephanie Gottlieb, the latter of which adorned Britney in diamond drop earrings, heart-shaped tennis necklace and diamond tennis bracelet, all of which totalled 62 carats.

Paris Hilton, Drew Barrymore, Selena Gomez, Madonna and Donatella Versace were just some of the famous faces in attendance and waved goodbye – sparklers in hand – to the couple as they departed the venue in a Rolls Royce at 10:15pm. Her mother, father and sister were not invited, though her brother Bryan was lucky enough to nab a spot on the guest list.

Read Next: Wedding Guest Wardrobes For Every Dress Code

The Best-Dressed Celebrities At The 94th Academy Awards