It’s that time of the year again – the cruise 2022 fashion show circuit is in full swing, and kicking it off was Chanel and Virginie Viard, who showed her latest collection against the limestone quarries of the Carrières de Lumières in Les Baux-de-Provence, a picturesque hilltop village in the south of France. Location is key here, as these soaring cliff faces were also the setting of the 1959 film Le Testament d’Orphée, directed by and starring artist-poet Jean Cocteau, who also happened to be a close friend of Gabrielle Chanel and one of Viard’s biggest influences when imagining the collection. “Because Gabrielle Chanel was close to Cocteau, and I love the film Testament of Orpheus,” she said in her show notes. “In particular this magnificent scene: a man with a black horse’s head descends into the Carrières de Lumières, his silhouette cut against the very white walls.”

A tale of two worlds, while the clothes were undeniably punk-inspired – think fringing in leather, beads and sequins, T-shirts bearing the face of the model Lola Nicon, logo-embellished lip rings, fishnet tights and acid-wash denim – Viard didn’t veer too far from the French fashion House’s signatures, pairing looks with tweed and tailored designs.

Chanelled by Cocteau’s illusory approach with a mainly black and white collection – “the precision and the poetry of Cocteau’s film made me want to create a very clean collection with a very distinct two-tone, made up of bright white and deep black,” explained Viard – a sparing splash of colour came in a palette of pastel pink tweed, turquoise and sky blue plus ostrich feathers dipped in lilac, resulting in fashion with serious attitude.

Comfort was also key with loose T-shirts, knit tracksuits and tank tops, while accessories came in the form of classic quilted bags worn like a garter around the thigh and pearls slung around hips, with metallic Mary Janes the shoes of the show. 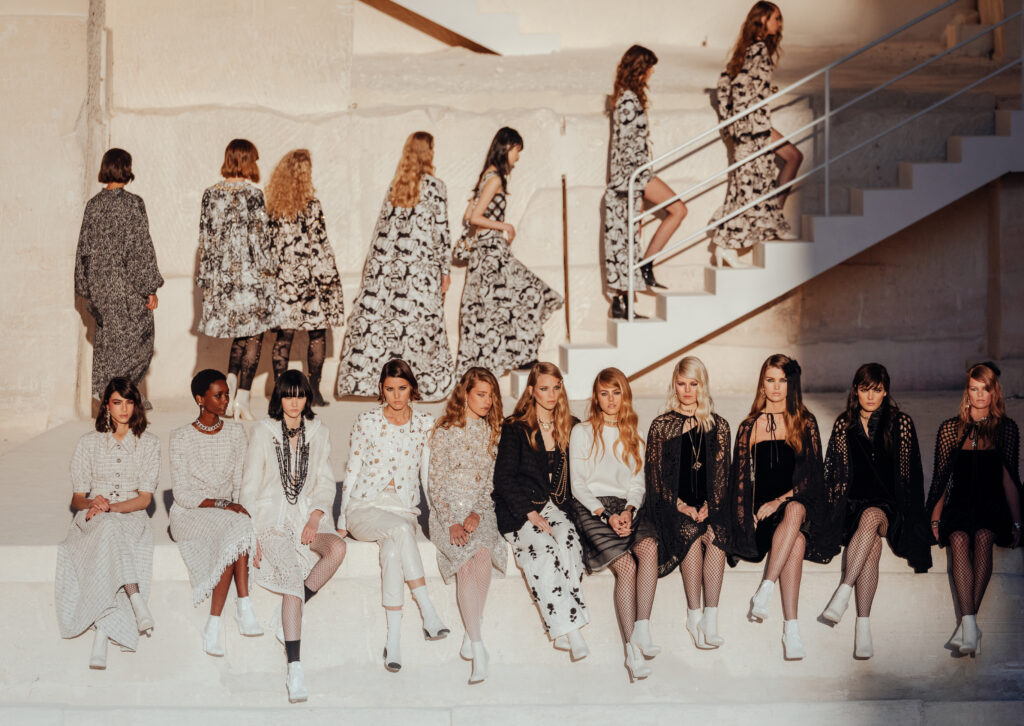 Read Next: The Shoot: A Lesson In Versatility With Chanel Cruise 2021/21

Roksanda x Fila Is One For The Extroverts