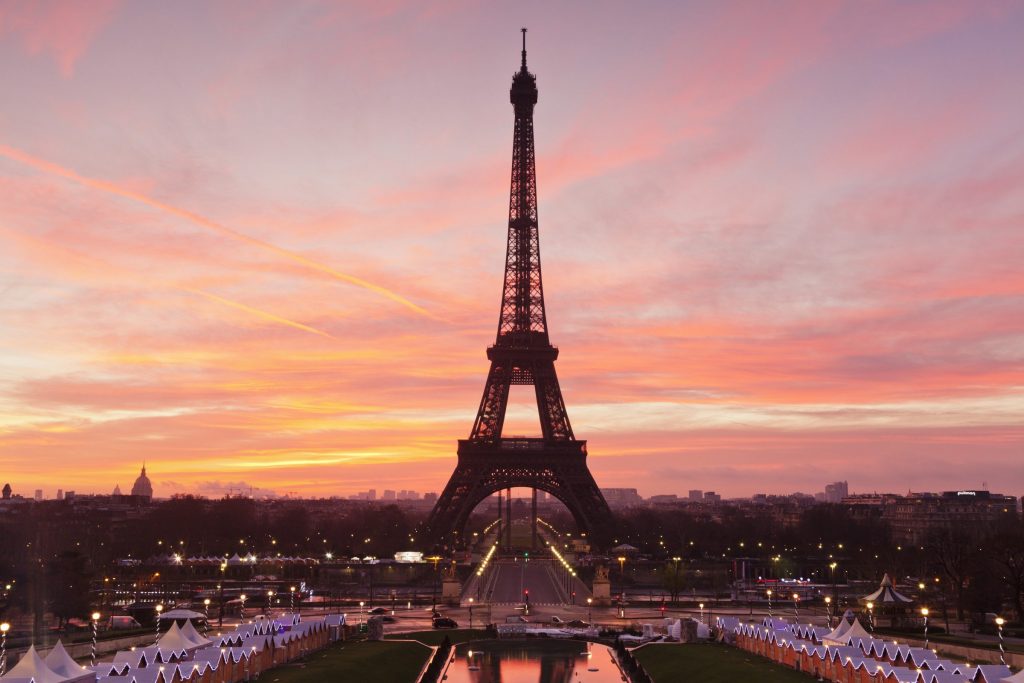 Will the seventies make another flashback in the Paris collections? Are brooches really back (as Prada, Les Copains and others would have us believe)? And which zeitgeist will Karl be tapping into at Chanel? We’ll be at all the shows to bring you all the answers… 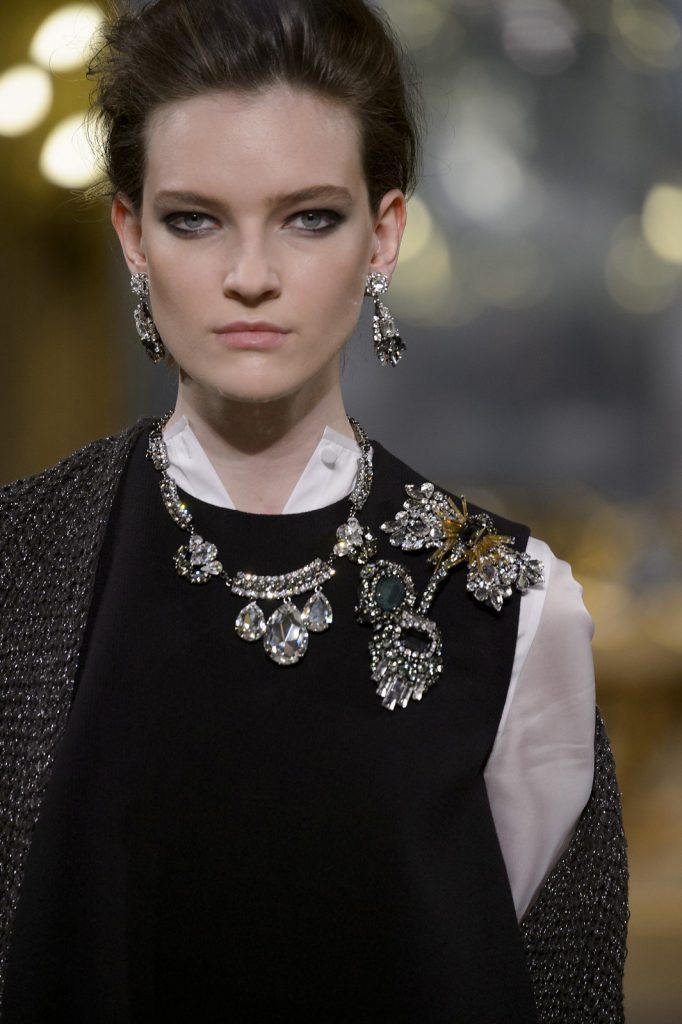 Brooches will be making their way into your jewellery boxes if Les Copains have anything to do with it.

As we bid a heartfelt arrivederci to Milan we look ahead to the grand finale of fashion month: Paris. Indulge now in your favourite Parisian reveries of people-watching at Hotel Costes and Caviar Kaspia, or take in a leisurely stroll around Le Marais, because once the models hit the runway there’s no time for daydreaming. 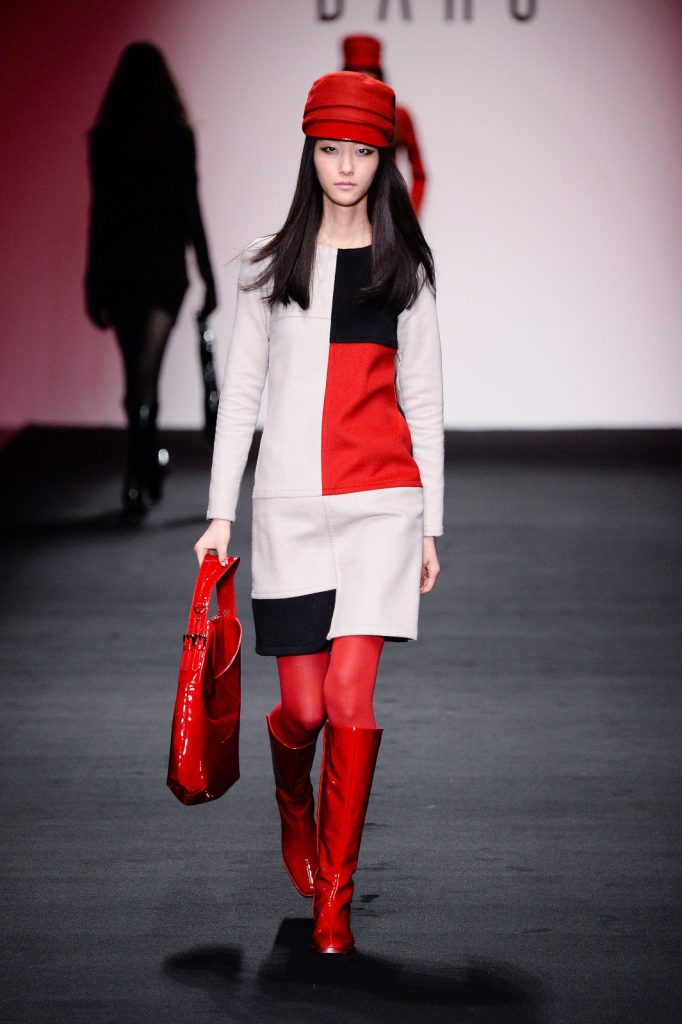 So far, Autumn/Winter 2015 has offered a riot of colour, texture and embellishment with seemingly not a decade, silhouette or trend eschewed.  This season leaves pared-back minimalism in the shadows; our winters will be bold, bright and eclectic. First up, the seventies, which live on in the flared trousers (upturned for bonus points) that were especially beloved on the runways of London (Jonathan Saunders and Gareth Pugh) and in turtlenecks and tan suede trenches in New York (Jill Stuart and Rebecca Minkoff). Geometric codes, meanwhile, were worked into sculptural block heels at Salvatore Ferragamo that looked fresh and never overworked. But feel free to pick a decade, any decade. The seventies have plenty of company – Missoni revived 80s shoulder-pads and bodycon, while a 60s mod squad takeover courtesy of Peter Pilotto, David Koma and Daks came complete with baker boy caps, colour blocking and a-line mini dresses. Outerwear choices abounded with Mongolian fur chubbies, fringed capes and sleek puffas offering an alternative to the ubiquitous louche belted coat (although Gigi’s turn as a modern day Marilyn Monroe for Max Mara may well have us sticking to what we know). 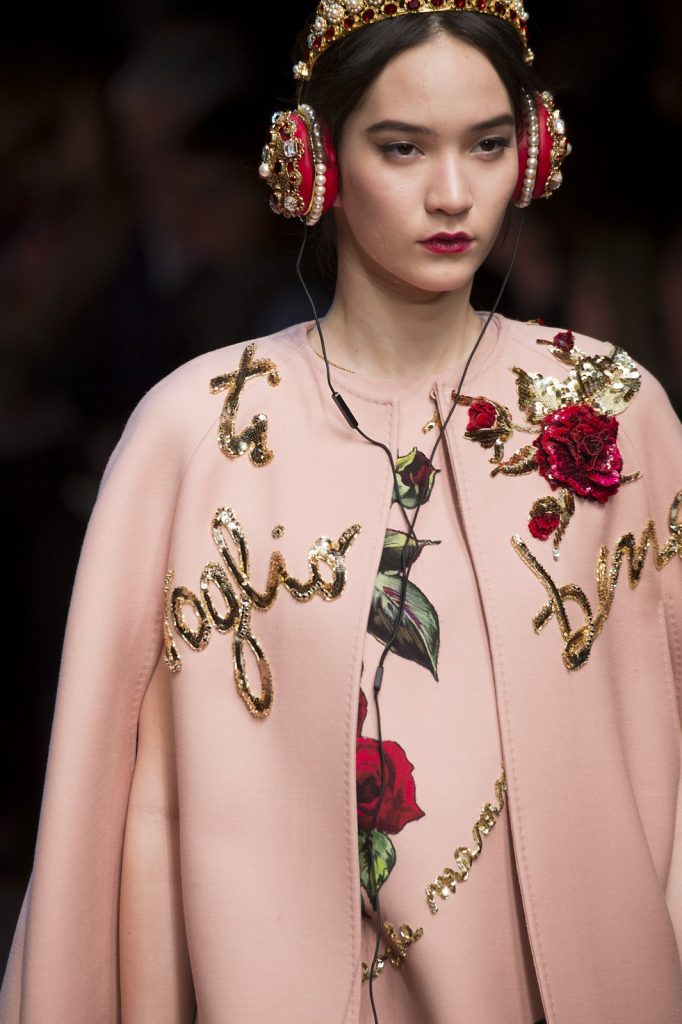 Dolce & Gabbana share the love with every Mama out there.

The fun continued as Versace brought sexy back (as only Versace knows how) in a winter revolution of unapologetic over-the-knee boots and heavily sequinned hashtags. Nineties supermodel Erin O’Connor made a statuesque return for Marc Jacobs and Giles, reminding us that no one does regal muse quite like Erin. Except, perhaps, for 71-year-old actress and former cover model Benedetta Barzini (a friend of both Salvador Dali and Andy Warhol), who positively shimmered as she walked in Antonio Marras’ artistically dark florals. Dolce & Gabbana celebrated the Mamas out there, with babies, children and pregnant models representing the family spirit that permeates the brand. It certainly hit a chord, causing even the most discerning fashion crowd to break into spontaneous applause and smiles. ‘Ti voglio bene’ (‘I love you a lot’) was appliquéd onto certain pieces and it looked like the jaded fash pack was more than willing to return the love. Finally, Anya Hindmarch gave us a singing chorus of motorway workers in orange hi-vis to accompany her ‘STOP’ and ‘GO’ roadside motifs – who says fashion takes itself too seriously? – and the addition of clothing to her core line of accessories certainly merited the fanfare. 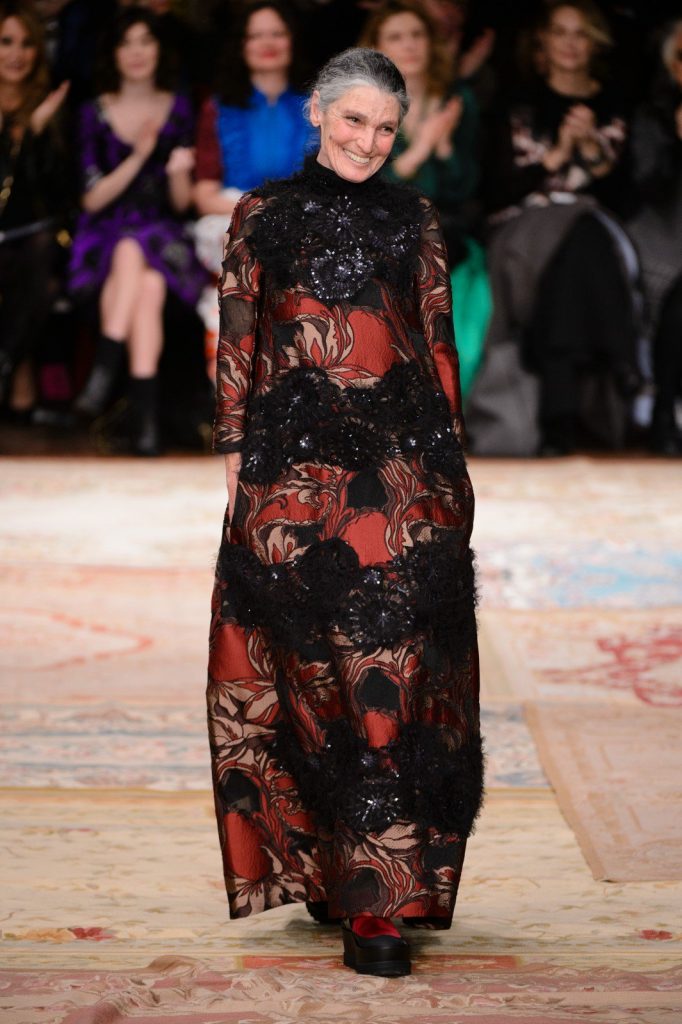 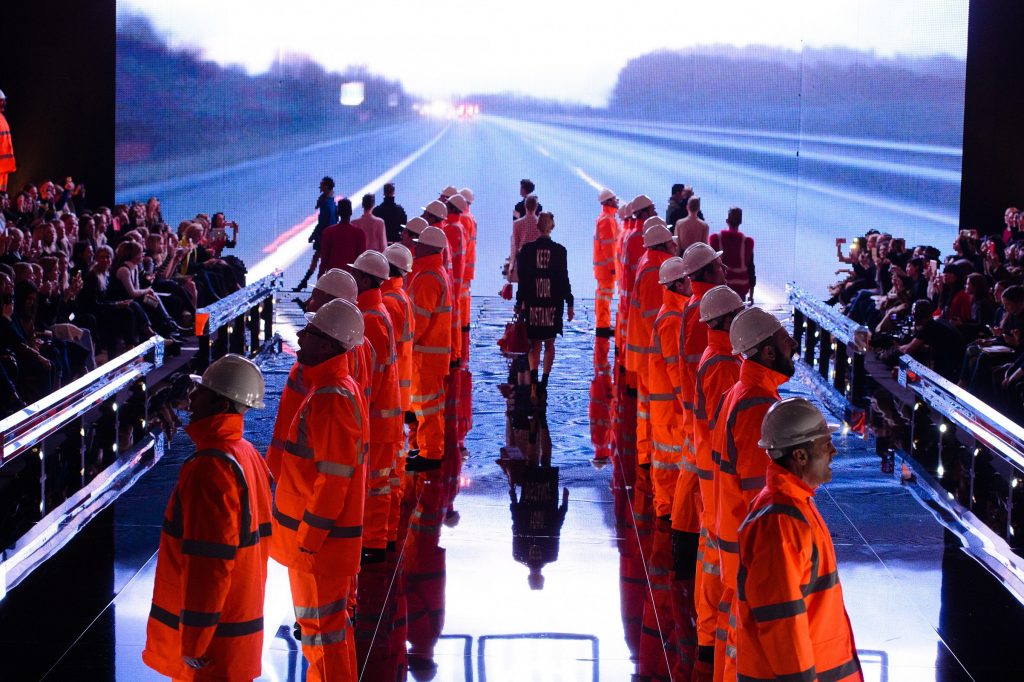 Those are just a few of the highlights that have kept us going through the most gruelling month in fashion. Now what can we expect from Paris? 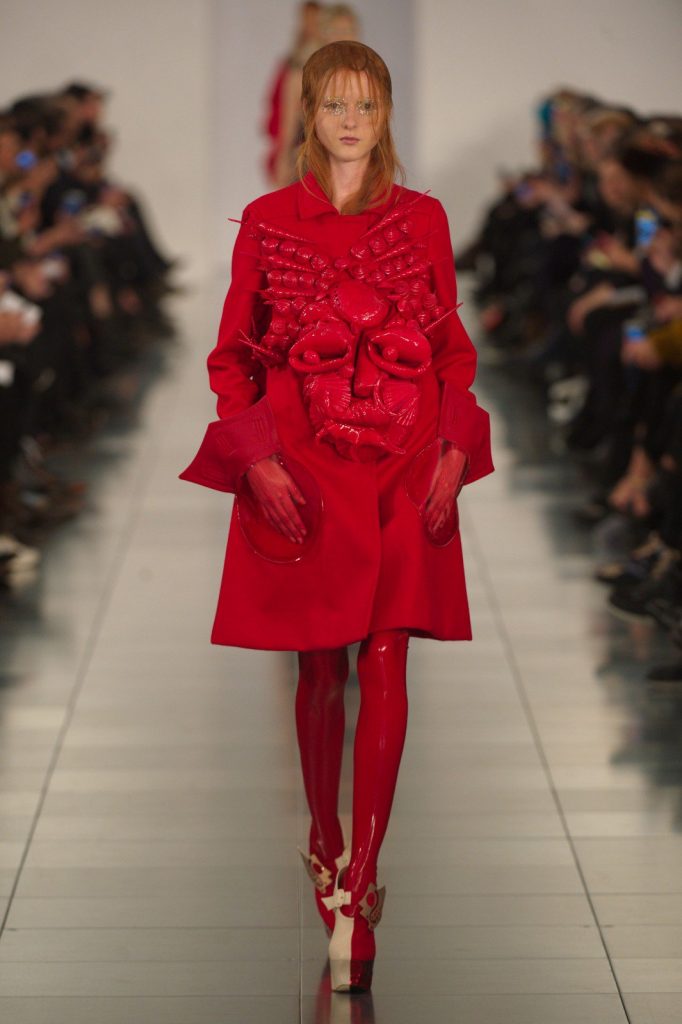 First and foremost, Galliano’s first ready to wear women’s collection for Maison Margiela is undoubtedly the most hotly anticipated. Will his inspiration align with the ghostly ethereal creations of his couture collection? The formerly secretive house of Margiela has been placed under the media microscope with the appointment of one of the most imaginatively flamboyant designers of our time, and we’ll be watching keenly to see what he delivers. We’ll also see debuts aplenty too. Adam Andrascik will show his first collection for Guy Laroche (tutored by the late Louise Wilson and a classmate of Simone Rocha and Thomas Tait, he’s part of a new generation of designers who will shape our fashion futures) and says that we can expect a darkly youthful collection with Japanese and Belgian influences. Nadège Vanhée Cybulski debuts for Hermès while at Nina Ricci Guillaume Henry takes the reigns after transforming the fortunes of Carven, displaying a magical touch that the classically feminine brand will no doubt seek to emulate. And, in the never-ending game of designer musical chairs, a last minute announcement reminiscent of Alessandro Michele’s baptism of fire appointment at Gucci, names Alexis Martial (Iceberg) and Adrien Caillaudaud (knitwear designer for ready-to-wear and haute couture at Givenchy) as artistic directors at Carven a mere three days before the show (we’re relieved for their sakes to hear that Caillaudaud has been working on the collection in secret for some time). 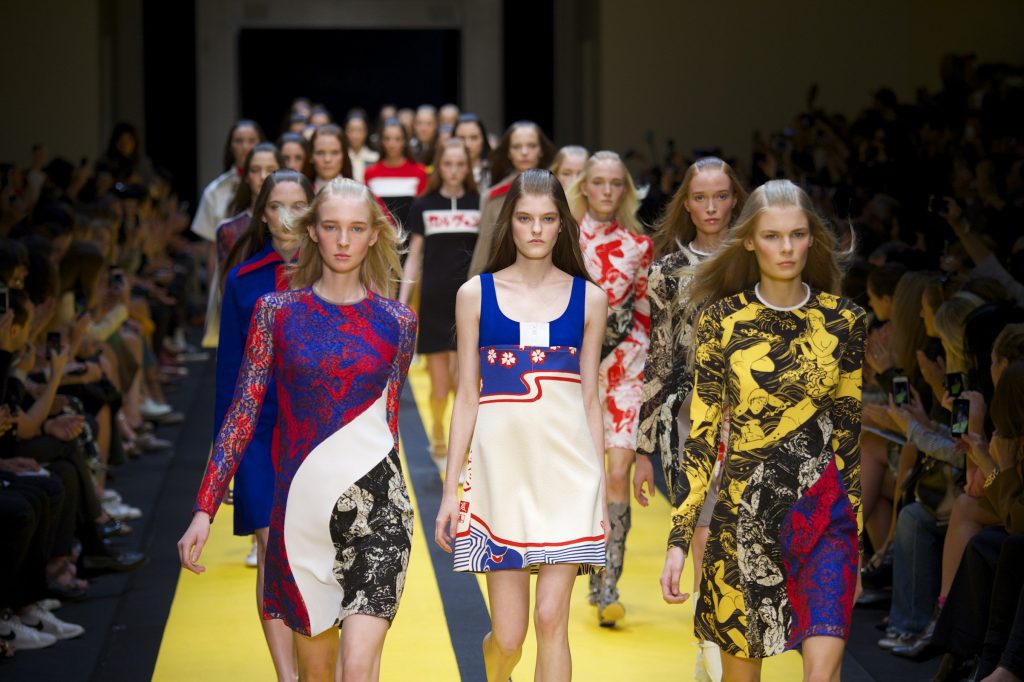 Day one kicks off in style with shows by ingeniously off-kilter LVMH Young Fashion Designer Prize nominee Simon Porte Jacquemus (for his namesake line Jacquemus) and Versace protégée Anthony Vaccarello, who consistently offers modern glamour devoid of overt flashiness. Collaborative gender-blurring label Each X Other will make its Paris debut today and makes it onto our list of ones to watch. The week continues as a veritable who’s who of the fashion industry giants.

So this is it, the moment in which months of intensive work finally culminates. But remember: Fashion month is a marathon not a sprint, so don your most fashionably comfortable flats, grab a sweet treat from Angelina and say bonjour to Paris.

How To Wear: All White Everything

Transeasonal Dressing: Return of The Mac