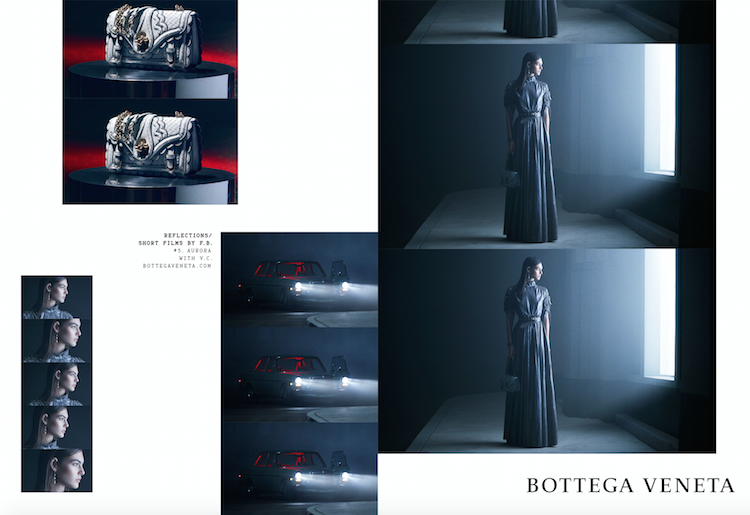 A still print image from Aurora, part of the spring/summer 2018 campaign

As part of their Art of Collaboration series, Bottega Veneta has just revealed the latest chapter of the Spring 2018 campaign. Titled Reflections, the chapter unfolds in a series of six distinct and deeply cinematic films, directed by Fabien Baron.“We have always told stories about our products and our brand,” says Creative Director Tomas Maier. “The evolution of the Art of Collaboration enables us to reach and have a dialogue with the customer on his or her own terms.”

The Art of Collaboration, conceived by Maier in 2001, was a great success, highlighting a storied relationship with artists. In its new form, each film will focus on a different character drawing from the the brand’s pillars of Mystery, Sophistication, Architecture, Sensuality and Surrealism. A unique precedent in luxury storytelling, the new concept was the result of a team of collaborators with director Fabien Baron, Academy Award-nominated cinematographer Philippe Le Sourd, renowned set designer Stefan Beckman and record-producer and composer Johnny Jewel all working to to translate the vision of Tomas Maier.

After having released the first four films, Miraggio, 196.6 MHz, Utopia and Rebirth, Bottega Veneta now presents Aurora and Vertigo. Aurora is all about finding brightness in the dark. The latest installment features Italian model Vittoria Ceretti walking into a flood of bright white light, signaling a brighter future. It reads like a film noir feeling changing into its counter opposite.

In Vertigo, rhythm and movement play the star role. A hypnotic story, it revolves around an electric fantasy filled with laser and neon lights, inviting you to lose yourself in your imagination.

The Shoot: Chanel High Jewellery Celebrates 100 Years Of No.5