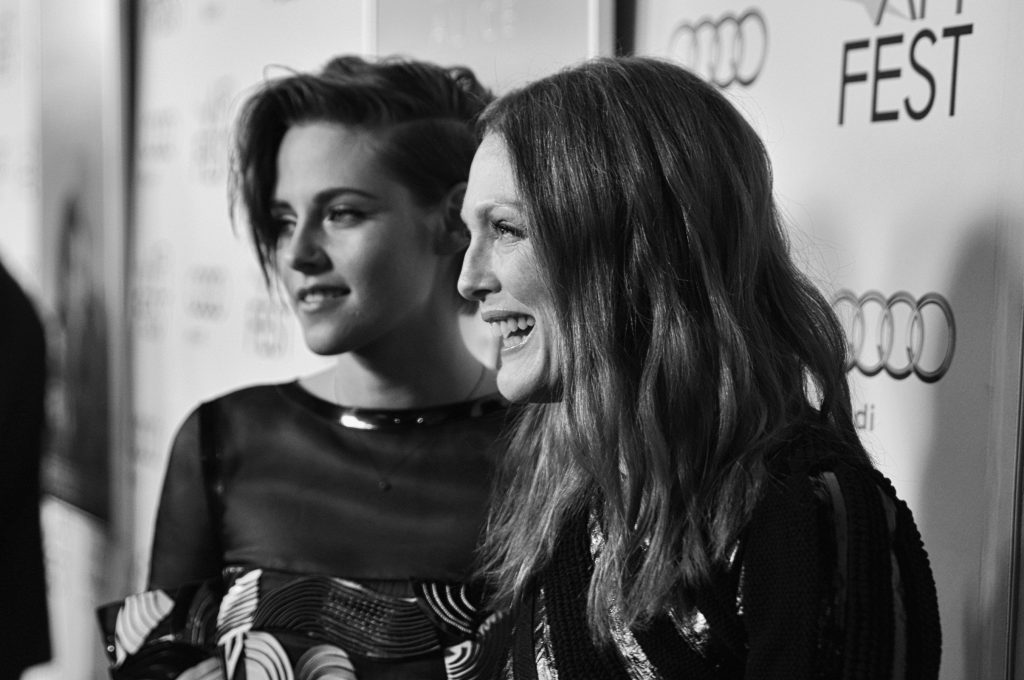 Kristen Stewart and Julianne Moore at the Still Alice premiere during the AFI FEST 2014. Photography by Oliver Walker/Getty Images.

Did you catch the best films of 2014? Decipher the Enigma codes with Benedict Cumberbatch in The Imitation Game, study time itself with the Golden Globe Best Actor winner Eddie Redmayne as Stephen Hawking in The Theory of Everything, and suffer an existential crisis along with Matthew McConaughey in Interstellar? If you did and you’re hungry for more, 2015 will not disappoint. 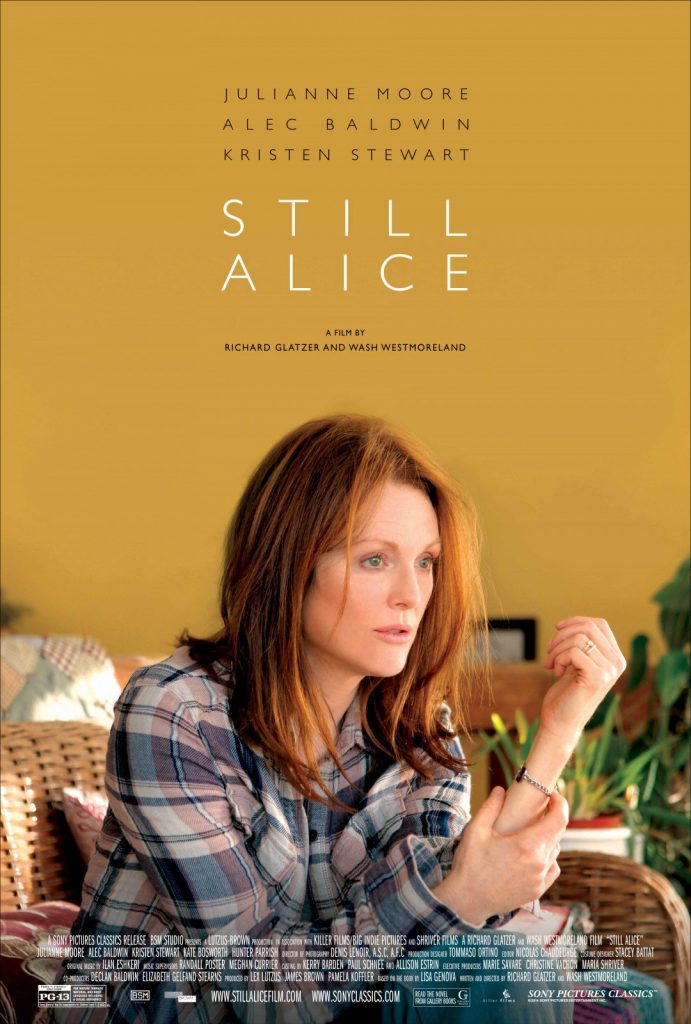 First up is Still Alice starring Julianne Moore in a career-defining performance which earnt her the Golden Globe award for Best Actress. With four Oscar nominations to her name but no statue, this is the role that will surely end Moore’s Oscar drought. A talented linguistics professor who loses her words to early onset Alzheimers, she must deal not only with the impact of the disease on her own life but with the repercussions for her husband (Alec Baldwin) and three children, played by Kristen Stewart, Kate Bosworth and Hunter Parrish. Emotionally poignant without sentimentality, Alice’s decline is powerfully moving.

Michael Winterbottom’s psychological thriller, The Face of An Angel, is based on the real-life murder trial of Amanda Knox; a tangled web of disputed evidence, judicial error and endless appeals which unfolded in Florence amidst a media frenzy. Played out through the eyes of troubled film director Thomas (Daniel Brühl of Rush fame), the film only glances upon the murder itself, instead focusing on the public’s obsession with the private lives of the young women involved and the hack-pack mentality of the journalists covering the case. Spot our model/actress obsession, Cara Delevingne, in her biggest role yet as student Melanie. 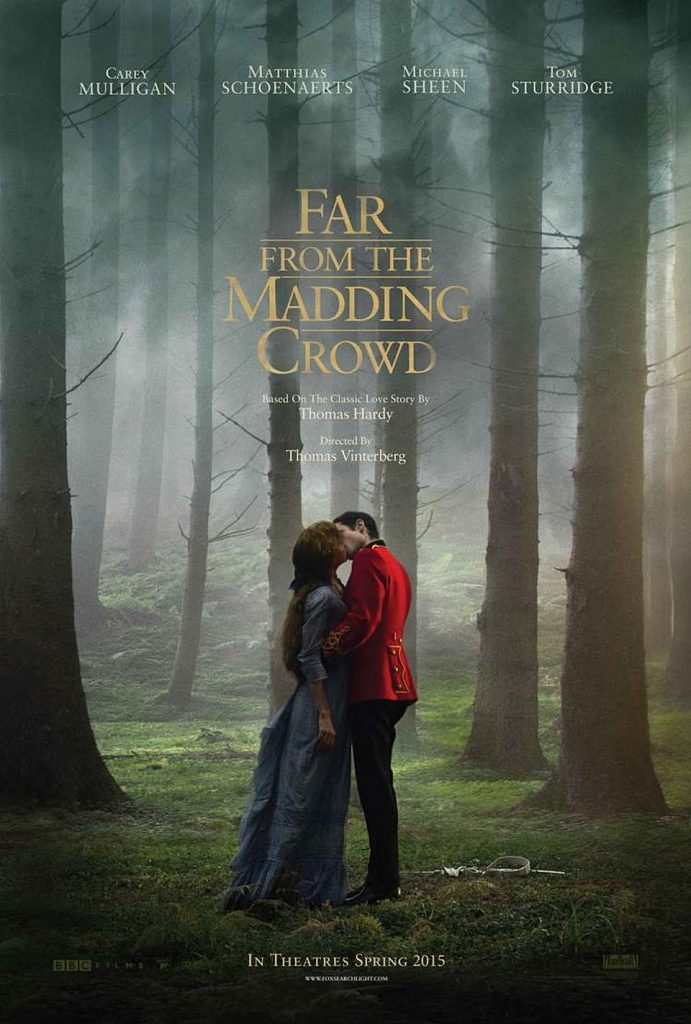 Carey Mulligan and Tom Sturridge in Far From the Madding Crowd.

The fashion icon that spawned a thousand flapper dresses as Daisy Buchanan in The Great Gatsby, Carey Mulligan, will be spending more time on our screens this year in two major films. Far From the Madding Crowd is a modern adaptation of the novel by Thomas Hardy in which Mulligan is cast in what must be a dream role as Bathsheba Everdene – a headstrong woman who captures the hearts of three very different suitors.  But does marriage to any one of them offer the freedom she desires or simply a lifetime of obligation? We’re guessing that this question is not one that weighed heavily on the minds of the protagonists of Suffragette. Directed by Sarah Gavron and co-starring Helena Bonham-Carter and Meryl Streep (as Emmeline Pankhurst of course) Suffragette is the story of the fearless radicals of the original feminist movement. Mulligan shines as fiery activist ‘foot soldier’, Maud. Shrinking violets need not apply.

A novel of a very different sort is the basis for Me Before You. The best-selling story and book club staple by Jojo Moyes follows small-town girl, Lou, whose life is changed irrevocably after she is hired to care for wheelchair-bound Will. Do we sense a melancholy love story rising from the midst of tragedy? In the hands of Emilia Clarke and Sam Clafin who are said to be on board to play the leads (Thea Sharrock directs), it couldn’t be anything else. 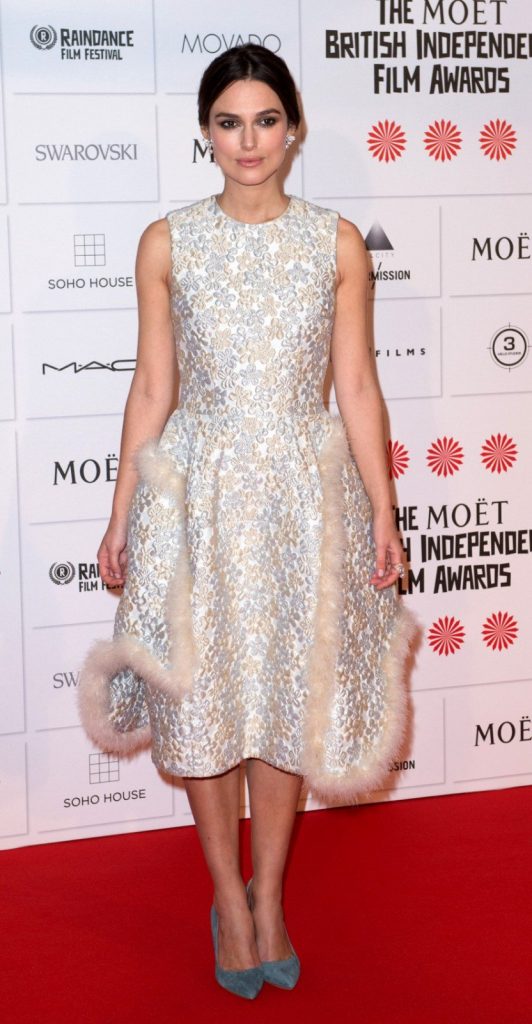 The battle between man and nature is one that informs many of the most heart-stopping disaster movies and Everest is no exception. Based on Jon Krakauer’s personal account of the Mount Everest tragedy of 1996, Into Thin Air, Baltasar Kormákur directs Keira Knightley, Jake Gyllenhaal and Josh Brolin as they push themselves to their limits to conquer Everest. We know from the outset that not all of those that make it up, make it back down. A fact that makes the outcome no less chilling.

From snow to sand, as Nicole Kidman takes to the dunes in Queen of the Desert as historic archaeologist, explorer and political attaché for the British Empire, Gertrude Bell. Written and directed by Werner Herzog, the film follows Bell’s extraordinary life and her role in defining nineteenth century Middle Eastern borders. Robert Pattinson plays a young TE Lawrence (of Arabia) – Herzog needed an ‘Englishman who still looks like a schoolboy but who is very smart’ – alongside James Franco (politician Henry Cadogan) and Damian Lewis (Charles Doughty-Wylie, decorated Lieutenant Colonel and Bell’s love interest). We have a feeling we won’t be admiring only the scenery in this epic in the making. 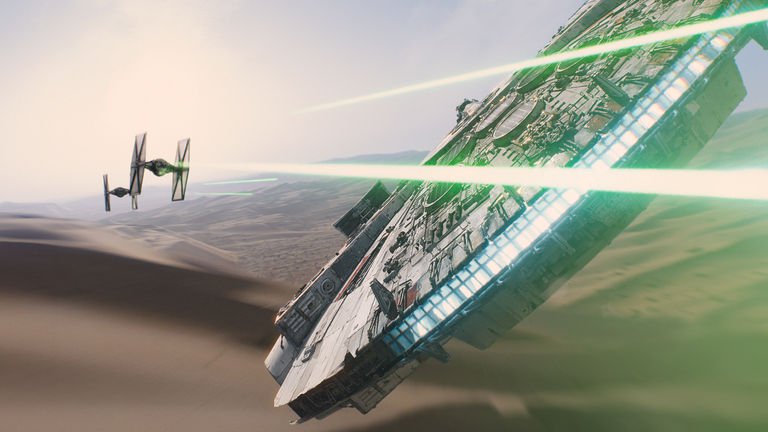 If it’s hero-driven blockbusting adventure that gets your heart rate pumping then for 2015 we need only mention Avengers: Age of Ultron, The Fantastic Four, Daniel Craig’s latest outing as Bond in Spectre, Jurassic World and, of course, Star Wars: The Force Awakens. And the latter does indeed awaken a very special kind of fan frenzy the world over. Episode VII, co-written and directed by JJ Abrams, is set 30 years after the events of Return of the Jedi and introduces new faces Daisy Ridley, John Boyega and Adam Driver (you’ll know him best as Adam in Lena Dunham’s Girls). With Driver in a mysteriously villainous role and Ridley said to be playing the daughter of Princess Leia and Han Solo, anticipation for the film seems inversely proportional to the number of concrete facts known (the first trailer released raises more questions than answers). This is one secretive production. Original cast members Harrison Ford, Carrie Fisher, Mark Hamill and Peter Mayhew make a return appearance and Academy Award winner and all-round style crush Lupita Nyong’o has confirmed that she is also heading for a galaxy far, far away. Can you hold on until December for the most eagerly anticipated film of the year?