The environmental impact of sanitary ware is devastating, but only by breaking down the social shame around periods can eco-friendly menstruation go mainstream

Right now, at this very moment, around 800 million women worldwide are having their period. And like most things, modern menstruation bears little resemblance to what our sisters throughout history experienced. Until the 20th century women would have started their periods at the age of 17 or 18 – these days the average age is 12 – the time, length and ow of which was influenced by poor nutrition, hard manual labour and lack of access to contraception, meaning women were having more babies and breastfeeding for longer.

Also unrecognisable would have been how women absorbed their menstrual blood when the time of month came around, reaching for the likes of rabbit fur, grass, sheep’s wool, papyrus, lint and rags, or often simply free-bleeding into their underwear, which saw a rise in the popularity of black underwear in the 19th-century – black being the more discreet colour to hide the blood.

And while period poverty and shaming are still taboos cancerously pervasive
in modern society, the advent of commercially available absorbent, disposable sanitary ware was heralded by most as a way to liberate women from the cyclical rhythms of their own bodies.

However, menstrual emancipation has come at a cost. Taking up to 800 years to decompose, releasing carbon dioxide as they do, sanitary products have become the fifth most common item to wash up on European beaches – more than single- use coffee cups or straws – and in the UK alone, the average woman is estimated to use around 14,000 tampons in her life.

With over 100 billion pieces of sanitary waste produced each year by this Dhs22 billion industry, according to the United Nations Environment Program the cost of manufacturing disposable sanitary products generates a carbon footprint of about 15 million tons of greenhouse gas annually.

Time for a quick herstory lesson: The first tampons were thought to have originated in ancient Egypt, where they were made from softened papyrus, later evolving in ancient Greece as a small piece of lint-wrapped wood. It wasn’t until the 1870s that the first commercially available sanitary pads were sold, attached to a sanitary belt worn low on the hips. During the 20th century, the outbreak of World War One saw allies diverting all resources to the war effort, meaning women resorted to using rags – from whence the Western term, ‘on the rag’ was coined. 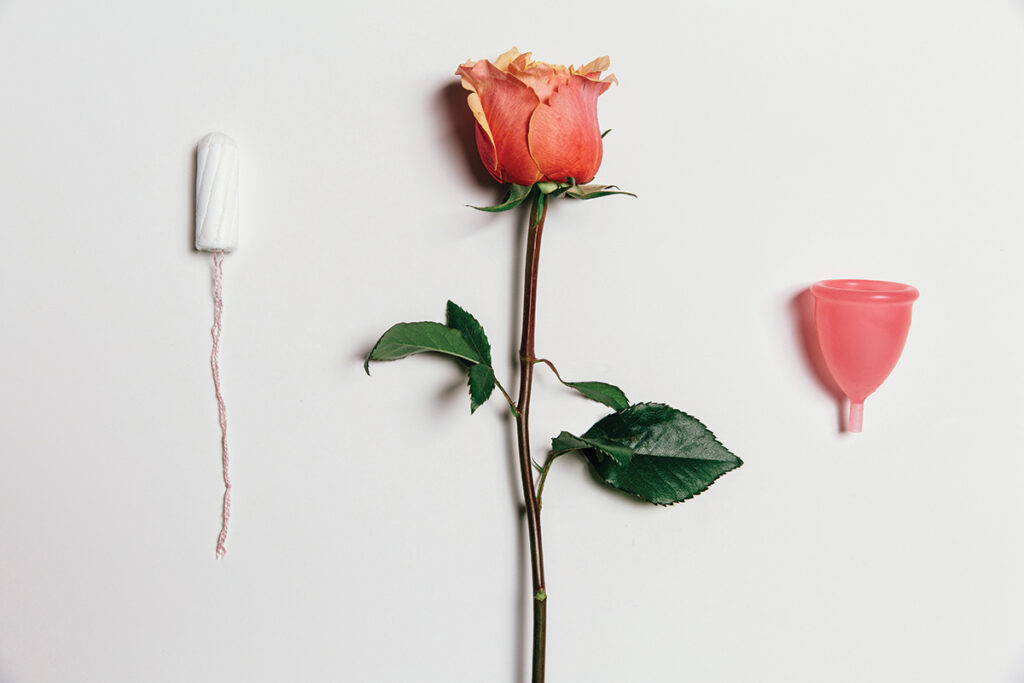 An Oscar-winning documentary about periods, and Generation Z’s willingness to discuss menstruation publicly, is helping to break down the idea that the subject is taboo

And it was during the Great War that nurses working in the eld noticed that the cellulose they used to dress wounds proved more effective than bandage cloth at absorbing blood and began using it during their periods – a discovery that would inspire US brand, Kotex, to develop a sanitary pad using the high-absorption material, which was made available to the public in 1921.

These days, periods are big news. The word considered once so publicly distasteful and shameful it only appeared on US TV in 1985 – spoken by a pre-Friends Courteney Cox in an advert for Tampax, although don’t celebrate too soon because until as recently as 2010, a U.S tampon commercial was banned from using the word ‘vagina’ – has been re-claimed by Millennials and Gen Z-ers in the wake of #metoo and other online campaigns that encourage women to speak out about the female experience.

When Justin Bieber’s protégé, Madison Beer was recently snapped by paparazzi with a period blood stain on her white bikini bottoms and slammed as “gross” by online trolls, the 20-year-old hit back saying, “Girls sometimes bleed through tampons because periods can be extremely unpredictable! I am not a robot. I am female. I am human and I am proud.”

Applauding the new generations of women who refuse to feel pressurised into ignominious feelings about their own bodies, Heli Kurjanen, founder & CEO of menstrual cup Lunette, says, “We just started a study on conversations about  periods, and Generation Z is more open to talk about them. It has been amazing, because when I started the company in 2005, nobody wanted to talk about periods. There was a lot of taboo, and we have been trying to break those from the beginning. It’s finally starting to pay off. The attitudes are so different and it makes me so happy, it feels like we have changed the world. There are still a lot of things that need to be done, but at least we have started something.”

The destygmatisation of menstruation is a stance which Vanessa Woodthorpe-Wright applauds. The Dubai-based British expat and mother-of-four, set up womanspace. co five years ago, producing washable, reusable sanitary pads that are not only as effective as disposable options, but designed to ‘invite you on a colourful journey of celebration and reconnection’ with your cycle. “There is still a huge amount of shame around periods,” says Vanessa. “I hated having mine and the feelings of shame that came with it, not to mention the fact that it caused me so much pain since I started having them at 13. It was only later on that I realised I had to change how I was perceiving the blood, stop hating it and start loving it.”

Studying for a Master’s Degree in Women’s Spirituality lead Vanessa to create the Rose Pad, a washable cloth menstrual pad that clips around underwear and comes in four shapes and absorbencies and an array of patterns and materials.

“I was reading all these sobering statistics about the time pads take to biodegrade and the effects they have on the environment,” she says. “Because sanitary ware is deemed a medical product, manufacturers are not required by law to state what they’re made from, including what goes into the absorbent gel inside pads. Plus, all the plastics and chemicals can interfere with the body’s natural ora. I started making pads for myself and my friends and I realised this was the business I needed to start. To have an impact on women’s health and comfort and the environment.”

The triumph of Period, End of Sentence at this year’s Academy Awards, where the documentary highlighting the lack of access low income women in India have to sanitary products and its e ect on their lives and education, won the Best Documentary (Short) Oscar, put periods in the headlines like never before. 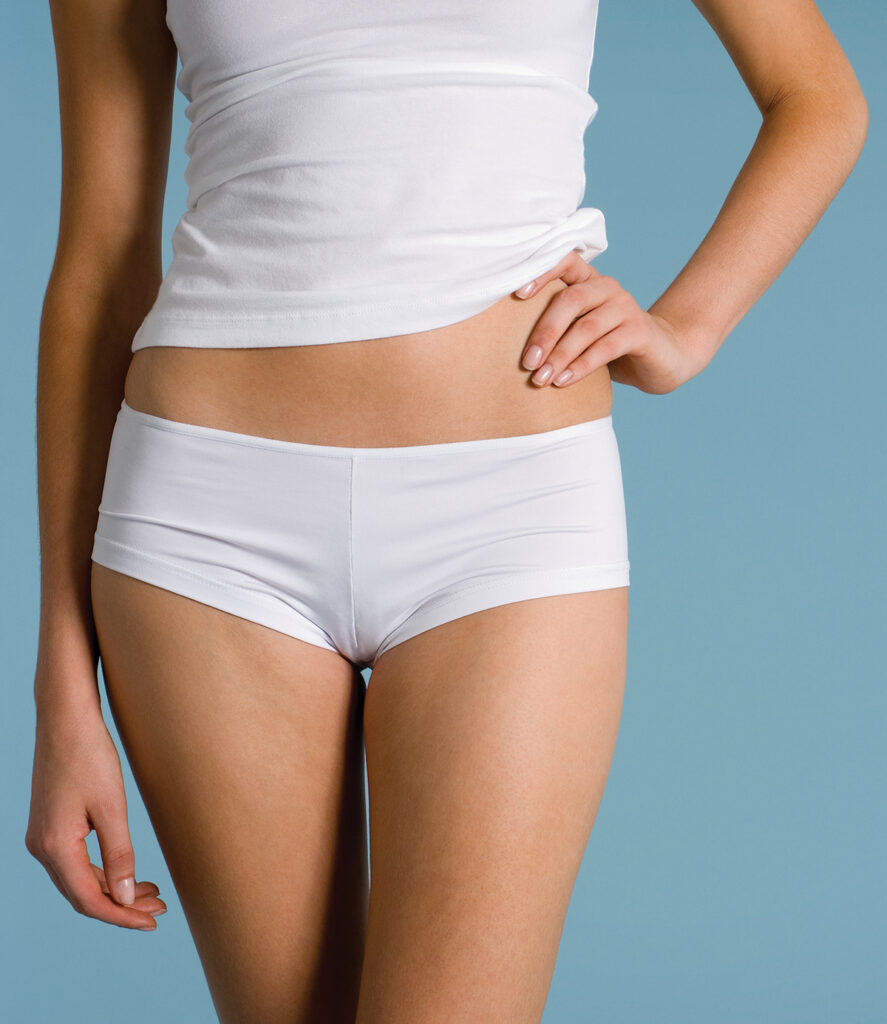 The manufacturing process of sanitary ware is chemically-intensive

However, as global awareness increased concerning the devastating effect single-use plastics are wreaking on the environment, women’s sanitary ware, which has often own under the radar as a major contributor to landfills, has come under scrutiny. After all, sanitary pads can be up to 90 per cent plastic – with a pack of pads the equivalent of four plastic bags – and plastic is also used in tampon strings, as well as the applicators.

Additionally, the manufacturing process of turning wood pulp into soft fibres is chemically-intensive, and includes diuron, a chemical the Environmental Protection Agency has dubbed a “likely” carcinogen, and dioxin, a toxin the World Health Organisation has linked to immune system suppression, reproductive problems and cancer.

The message is also not getting across about not flushing sanitary products down the toilet, where they pollute waterways, block sewage pipes and have a detrimental effect on marine life.

According to figures published in the Journal of the Institution of Environmental Sciences in 2014, around 2.5 million tampons, 1.4 million sanitary pads and 700,000 panty liners are flushed down the toilet in the U.K each day. And in 2015, the not-for-profit Trash Free Seas program at Ocean Conservancy collected 27,938 used tampons and applicators from beaches around the world in a single day.

Today, even the most cursory online search yields a plethora of eco-friendly alternatives to disposable sanitary pads and tampons. Period pants with built-in protection, re-usable pads, sea sponge tampons, reusable tampon applicators, even the free bleeding movement all have their devotees, but it is menstrual cups which have proven one of the most popular eco-friendly alternatives to single-use pads and tampons.

With over a hundred menstrual cup brands on the market, including Diva Cup, Lunette, Blossom Cup and Lena, most are made from silicon or rubber, although the forst menstrual cups were actually patented at the end of the nineteenth century and made of aluminium or hard rubber.

“Lunette is made of medical grade silicone and holds the menstrual fluid discretely in a small cup inside of you, making it a much healthier alternative to bleached tampons that carry a risk of Toxic Shock Syndrome,” says Heli Kurjanen. “One cup replaces around 1,000 disposable products, if you use it for two years, saving on a huge amount of waste.”

And while protecting the planet at all costs has become an 11th hour priority, women’s rights campaigners are agreed that tackling the environmental impact of sanitary ware cannot be achieved without first removing the social stigmas, taboos and conversational barriers around periods.

“When I’ve gone to markets to sell the pads, some people have been disgusted by them,” admits Vanessa. “One woman even shouted at me that I should leave. I wanted to sell them at school fairs but was told the product and topic wasn’t suitable for children. I uncovered a taboo and had no idea how far that went. The ultimate shame of it all is that we’re raised to pretend we don’t have periods.”

Expert Advice on Natural Acne Treatments to Try at Home