Imbuing a certain sense of ‘je ne sais quoi’ into the Chanel No5 fragrance family, Marion Cotillard is the latest in a captivating line of muses for the French fashion house, discovers MOJEH

It was 1921 when an ambitious French businesswoman and belle of the Parisian social elite created a scent that would revolutionise the way women smell. The woman in question was, of course, Gabrielle ‘Coco’ Chanel and, for her, five was a significant number. Chanel No5 was launched on 5 May that year, and Coco herself said that it would always bring her luck. And that it did: almost a century later, and Chanel No5 is arguably still the world’s most iconic perfume. Now the luxury French house has written the next chapter in the story of its legendary scent under the expertise of its head of global creativity resources for fragrance and beauty, Thomas Du Pré de Saint-Maur. 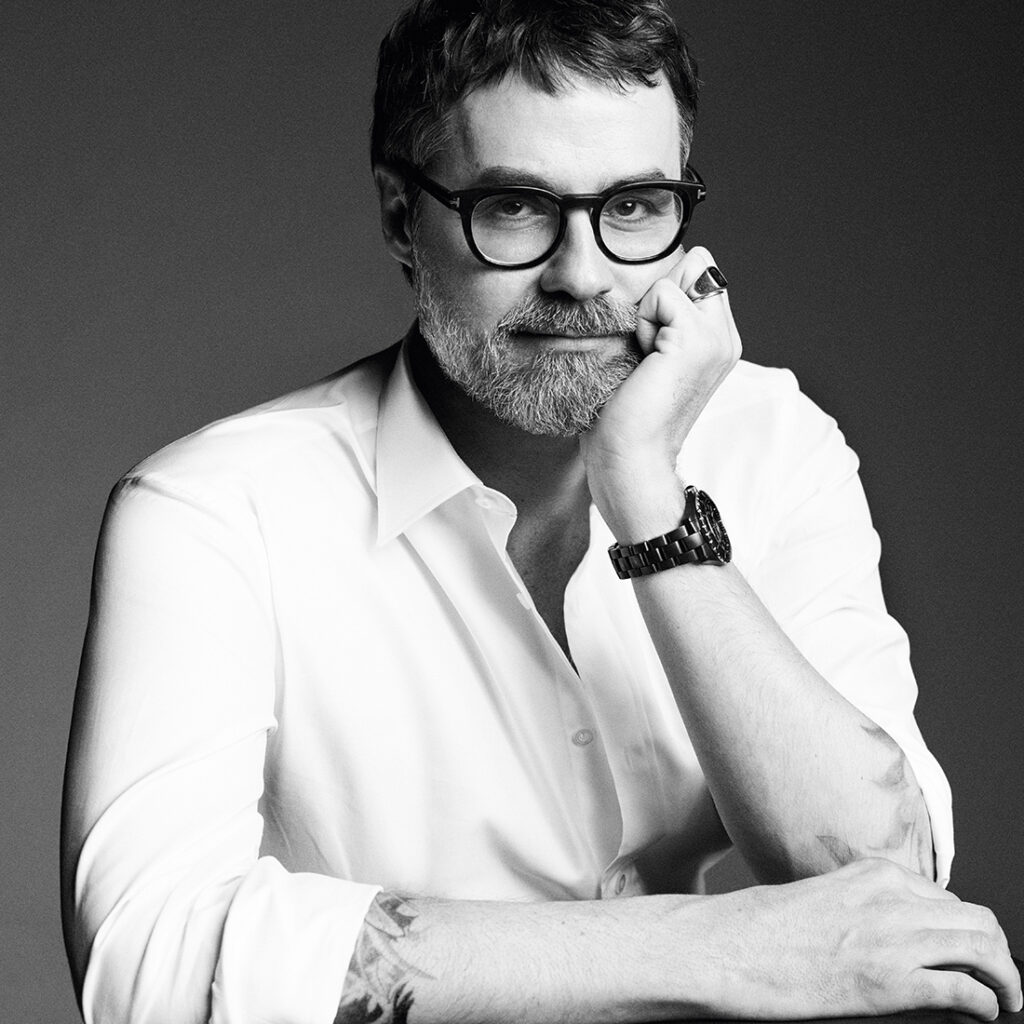 Following in the footsteps of Nicole Kidman, Gisele Bündchen and Lily-Rose Depp, to name a few, French actress Marion Cotillard is the latest screen siren flying the flag for Chanel No5, having been named as the scent’s latest muse, or égérie in Du Pré de Saint-Maur’s native tongue. Continuing the lineage of feminine icons who have been the face of this olfactory revolution, Du Pré de Saint-Maur tells MOJEH: “Marion has many things in common with Chanel. She represents an archetype of the brand because she is such an accomplished woman, but not in the way of perfection. There is nothing more boring than being perfect – it is the end of everything exciting and desirable. We chose her because she is complete, and very complex.”

This love of complexity is also to thank for the appointment of Swedish-born Johan Renck as the campaign’s director – the man behind Lily-Rose Depp’s No5 L’Eau shoot in 2016, Keira Knightley’s Coco Mademoiselle campaign in 2017 and most recently, HBO’s award-winning mini-series Chernobyl. “I like to work with people I love,” says Du Pré de Saint-Maur of Renck. “And when you find someone who has the talent to create a big story in 30 seconds, you know you have found an epic mind with huge talent.”

Inspired by a woman in love, Marion is the strong and seductive No5 woman at the heart of the campaign, who is transported to the moon from the dark streets of Paris. Here she encounters a man, and the two are quick to embark on a fanciful pas de deux, using dance to portray the depth of their love. Her ensemble for the occasion is nothing less than spectacular: the gold embroidered lace dress she is sporting is a reinterpretation of a gown once worn by Gabrielle Chanel, and required over 800 hours of work by 16 embroiderers, combining needlework and Lunéville hook techniques, all under the creative eye of Chanel’s artistic director, Virginie Viard. 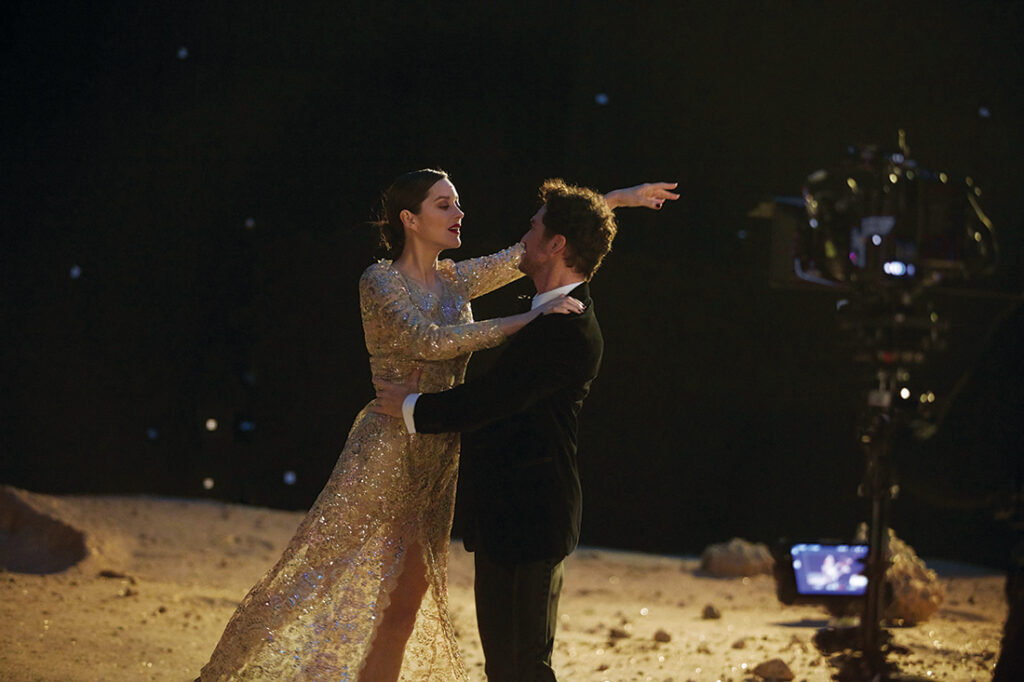 While this is the first time the actor and icon of insouciant French chic has lent her face to a fragrance, Marion most certainly isn’t the first for Chanel No5, whose ad campaigns have inspired some of the most incredible imagery the beauty world has ever seen. Marilyn Monroe believed Chanel’s aldehydic blend had worked its feminine magic. “Five drops of Chanel No.5,” was her coquettish reply, when famously asked in 1952, “What do you wear to bed?” Sixty-one years later the late icon joined the league of stars as the face of the legendary scent. For this, the French fashion house delved into the archives and unearthed seductive black-and-white shots of Marilyn and her No5 bottle taken by photographer Ed Feingersh. These were used alongside an unreleased recording capturing Monroe’s original words. Andy Warhol later gave the heritage perfume a much-needed dose of Pop Art cool in 1997 when Chanel bought the rights to a series of prints featuring the much-loved bottle to use in its advertising campaign. 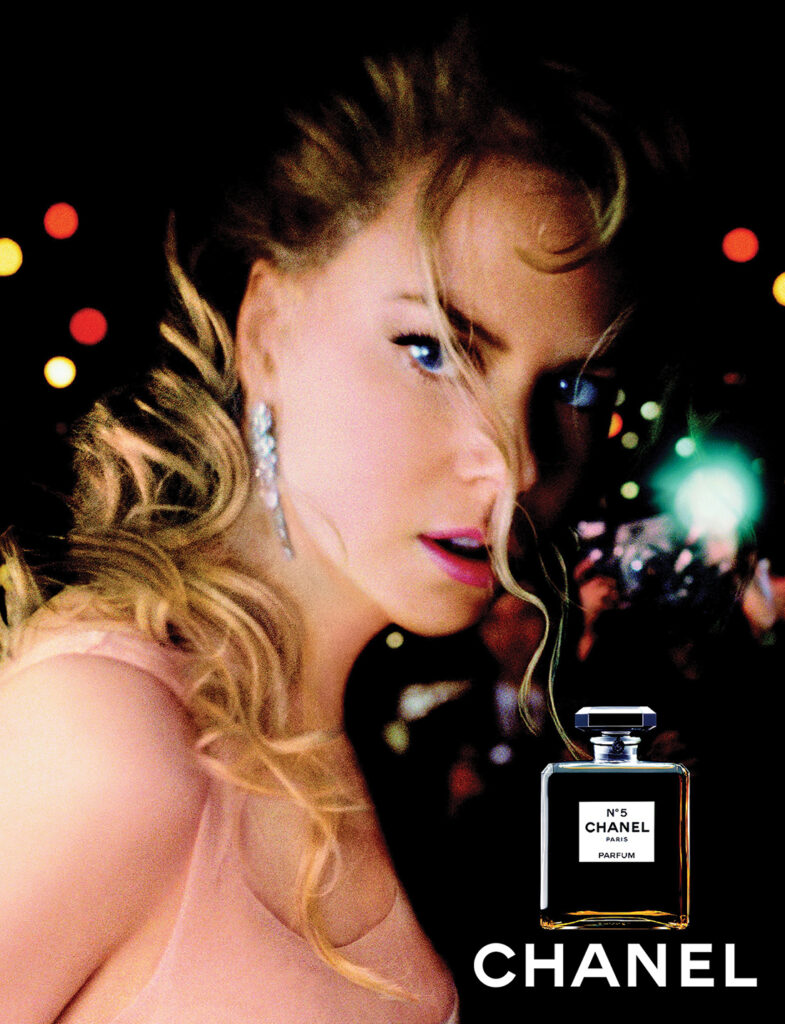 Cotillard follows in the footsteps of No5 icons including Nicole Kidman

But in 2004, Karl Lagerfeld upped the ante and launched the brand’s foray into mini movies by appointing renowned filmmaker Baz Luhrmann to create an sumptuous visual feast in the form of a Chanel No5 commercial starring Academy Award-winning actress Nicole Kidman. Equating the fragrance with beauty, romance and star power, it featured Moulin Rouge-reminiscent rooftop scapes, a dalliance with an arty type and a wistful Kidman, who, in the end, chooses her film-star commitments over love. “Baz pushed us to the maximum level, reaching Chanel No5 XXXL,” Du Pré de Saint- Maur tells MOJEH. “Everything he does is encoded and loaded with symbols: the colour, the music, the play – he imprints that feeling of saturation, pushing the set to the maximum.” Luhrmann was also the mastermind behind Chanel No5’s 2014 campaign with supermodel Gisele Bündchen, featuring a stunning Modernist house, dreamy aerial views of New York’s Queensboro Bridge, and a wistful Bundchen who, in the end, chooses love and her family over her modelling career.

Never one to rest on its laurels, Chanel No5 broke new ground once more in 2012, when Brad Pitt joined the ranks as the house’s first ever male face of the brand’s signature scent, starring in a black-and-white ad directed by filmmaker Joe Wright. Lily-Rose Depp also became the youngest face of the fragrance – she was just 16 when she starred in the campaign for No5 L’Eau, a fresher, lighter and more youthful take on the classic – reappearing in the 2019 Holiday collection amid a snowy scene on top of a large-scale Chanel No.5 L’Eau fragrance bottle. “The ability to interpret a role is a talent that not everybody has,” says Du Pré de Saint-Maur when speaking of his muses. “Be it Nicole in 2004 or Marion in 2020, at these different times they represented the ideal of a complex and articulated woman. Lily was much younger when we chose her, and we chose her because we wanted to talk about youth but also the ability of a woman to explore each facet of herself. When you are younger, you are more extrovert and have a sense of adventure and possibility.” 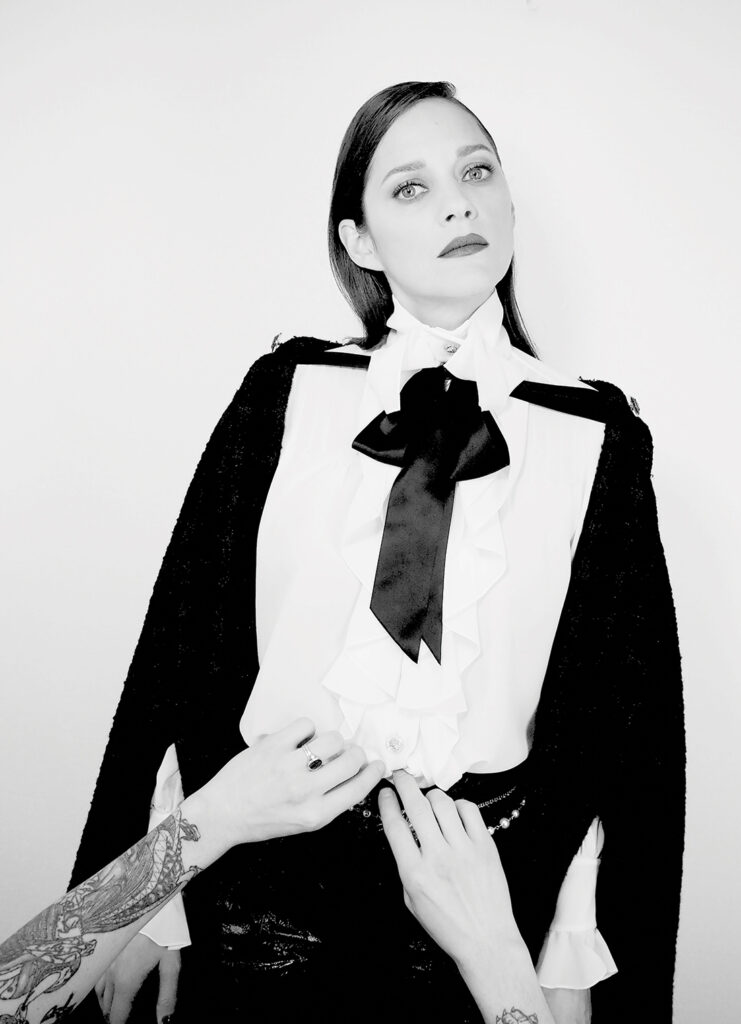 As for Marion, Du Pré de Saint-Maur’s biggest fear was falling short of these past campaigns, and as such, the advert’s creation was two years in the making. “The challenge every human faces is the ability to get bored quite quickly, and because it was such a long process, we had our doubts,” he says. “We had a very clear idea of what we wanted to say, but figuring out how to say it was the adventure. The biggest challenge for creative people is fear of failure, especially given the great commercials we have previously created. Will this succeed in the same way?” We’re absolutely certain that he will, and for many more years to come. Watch the film here.

Read Next: The fragrances you need to try this winter