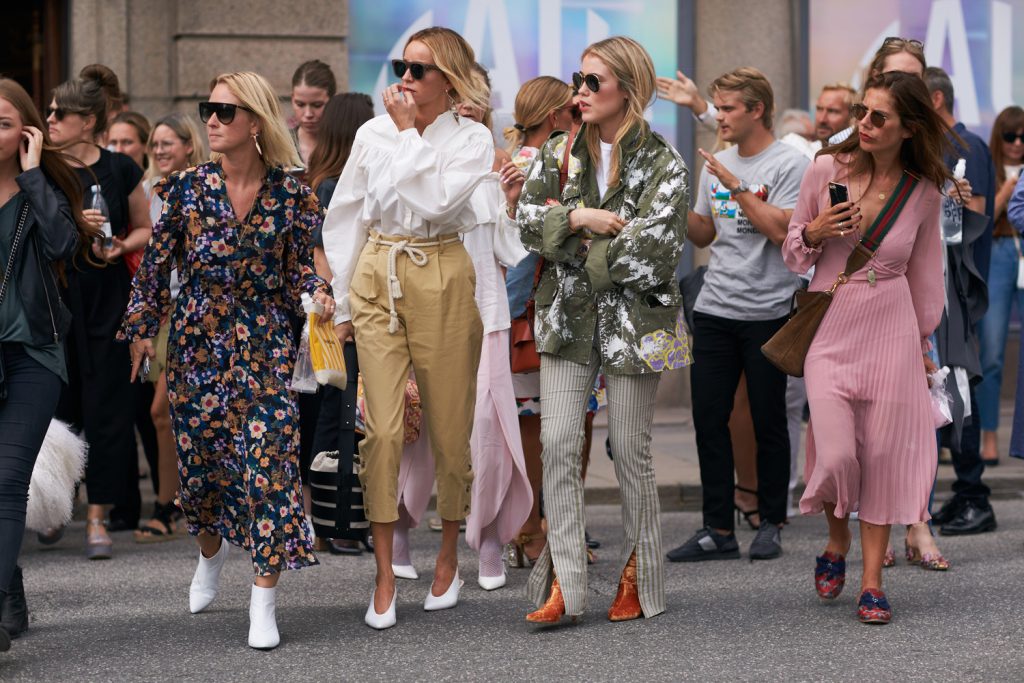 From the edgy power dressing of New York and the Gucci-esque excess of Milan, to the eclectic melting pot of London and the polished chic of Paris, each of fashion’s four capitals have their own distinct style aesthetics. However, a new collective of power players have steadily climbed their way to the top in mule (and sneaker-clad feet) carving out a strong fashion identity for Northern Europe. Striking a harmonious, and incredibly stylish, balance between laid-back and sophisticated, Scandinavian women (and men) have well and truly eclipsed their European and international counterparts in the sartorial stakes. Fusing both cool and comfort with unsurpassed ease, these Danish, Norwegian and Swedish natives have serious style game. “Scandinavian style has always had a tendency towards minimalism and practical wear,” explains the Danish stylist and author of Fashion Scandinavia Dorothea Gundtoft. “150 years ago fashion wasn’t a part of our lifestyle, instead local villages had their own embroidery techniques and styles that were used for costume-like pieces worn at weddings and festive occasions that decorated with oral patterns. As our economy has changed and our cities have developed and grown, there’s now a focus on clothes that can be easily worn while bicycling as that’s how everyone gets around.” Weather has played a pivotal part in the development of Nordic style due to the harsh climes that sees the region engulfed in winter for six months of the year, averaging six hours of sunlight per day. “Our weather is more often rainy than sunny,” laments Gundtoft, “which means that you need a good coat and winter clothes – but they don’t have to be dull. Scandinavian interior design from the Fifties onwards including the architectural lines and practicality of designers such as Arne Jacobsen, Finn Juhl and Svenskt Tenn have also greatly influenced our fashion,” she notes. “Our style might not be as glamorous as our friends down south, but I think Scandinavians have a coolness that ́s pretty unique,” quips Norwegian blogger Marianne Theodorsen. A quick scroll through her wildly popular Instagram account can confirm this – on any given day she could be rocking a checked midi skirt with a hoodie and Hermès Birkin bag or a slinky Proenza Schouler halter dress with Marimekko patterned boots. “Essentially, we’re laid back and practical and mix luxury with brands like H&M and Zara – the key lies in putting your own unique twist on it.” 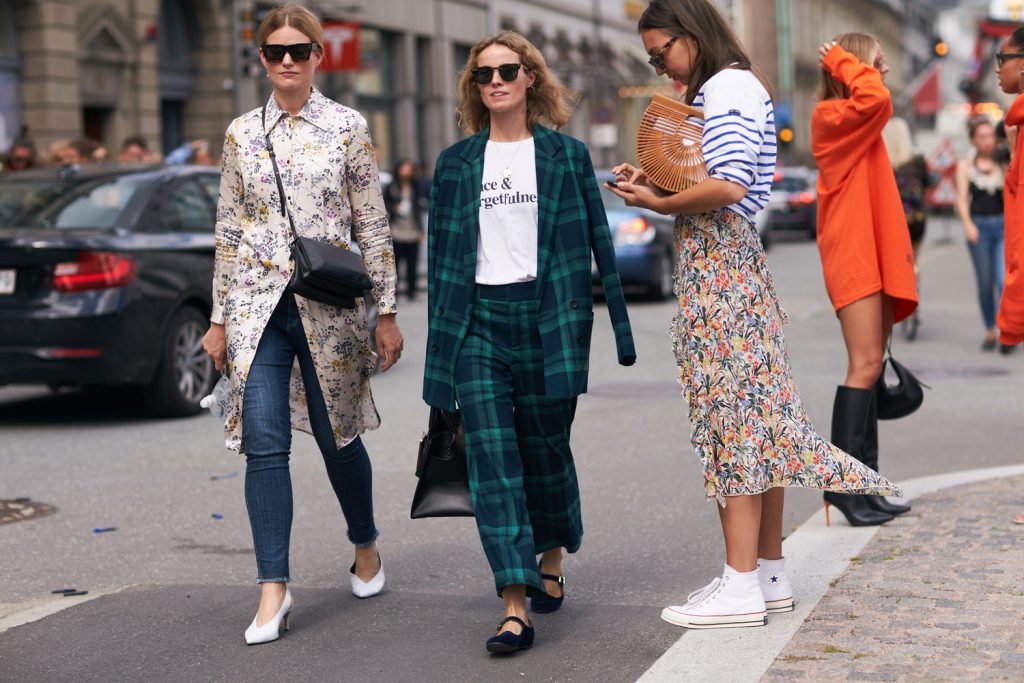 Built upon a solid foundation of tonal monochrome palettes, uncomplicated clean lines and fluid silhouettes with just the right amount of bold colour and print thrown in, Scandi style combines minimalism and functionalism with an effortless mastery. Think: timeless camel coats, black oversized cashmere knits and super-cool denim paired with backless loafers or Balenciaga’s Instagram-worthy oral ankle boots for a look that’s understated and slick. However, there are subtle differences between the aesthetics of the three nations. “In the past Danish fashion designers were slightly more experimental than the Swedes, who kept their clothes relatively minimalistic, and the Norwegians always had strong knitwear, but they were more daring with their prints,” says Gundtoft. “Today, I feel like it has changed slightly. Norwegian designers have a more fashion-forward approach to their branding and presentation now, while colour and prints are definitely the new mood in Danish fashion, with designers such as Saks Potts mixing different coloured fur and Baum und Pferdgarten combining printed fabrics to quirky effect.” For Nordic brands, the smaller markets within their home nations cause them to expand internationally quickly and efficiently. Take Stutterheim, for example: the Swedish raincoat brand was stocked at Barney’s New York within its first year of operation and has grown its production from three raincoats a day to between 500 to 800 per day in six years. Swedish streetwear brand Acne Studios has an international mindset, staging runway shows on the Paris Fashion Week schedule and has stores in London, Tokyo, Seoul and New York. A strong command of the English language often sees Scandinavian brands launching English websites from their inception, which makes them accessible to a much larger international audience. Social media has been one of the driving forces behind the rise of Scandi street style fashion, with Elin Kling arguably the first person to put modern Scandinavian style on the map. Kling started out as a blogger alongside the likes of Anna Dello Russo, Rumi Neely and Tommy Ton on the Now Manifest website and picked up international cross-traffic from the site, which eventually led to the launch of her highly successful print magazine, Styleby. This paved the way for an outcrop of fashion insiders such as Kling’s colleague Columbine Smille and Pernille Teisbaek both locally and abroad. Stockholm and Copenhagen Fashion Weeks now draw a large international crowd of both press and buyers thanks to brands like Ganni and by Malene Birger, which helps to elevate younger brands and street style stars on an international scale. “A lot more of the international press are attending the Scandinavian fashion weeks and are showing an interest in our street style,” explains Gundtoft. “Now, the collections are suddenly featured on the websites of international fashion publications and the street style is huge. It brings a lot more focus onto our designers and gives them incentive to produce great collections – the world is watching!” The fashion industry within the Nordic nations is currently booming. 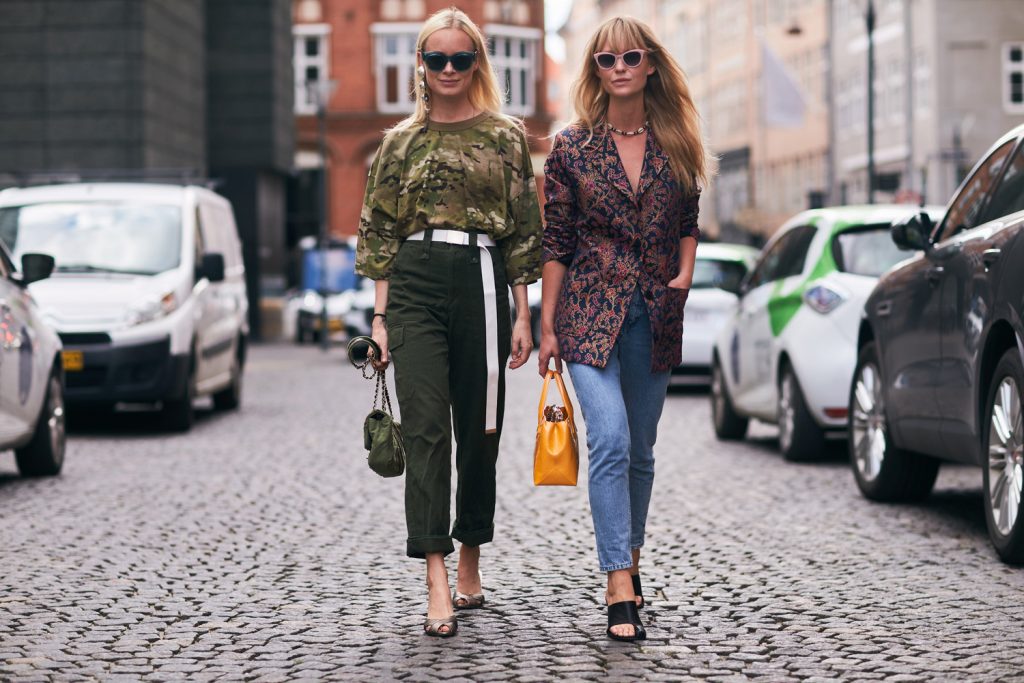 “There are so many great things happening on the Scandinavian fashion scene right now,” enthuses Theodorsen. “Some brands to look out for are Norwegian Tom Wood, Admir Batlak, Edda Gimnes and Michael Olestad – they’re all bringing something new and exciting to the game.” Gundtoft is quick to agree. “Keep an eye on the newcomers,” she advises. “Freya Dalsjö, Saks Potts and Mark Tan alongside Stine Goya who is famous for her prints. Baum und Pferdgarten do make a fine wardrobe, alongside Swedish brands such as Acne Studios, Filippa K, Ida Sjöstedt, Totême and the Norwegian designers FWSS, Veronica B. Vallenes, and Elisabeth Stray Pedersen.” While the Middle Eastern climate is dramatically different to that of Northern Europe, following the Scandinavian style set’s lead towards garments that offer quality and wear-ability is a wise move. “The key takeaways from our style is to wear clothes that are practical for everyday activities, with a focus on sustainability and items that are well-made,” advises Gundtoft. “Combine classic elements, such as great cottons, cashmeres, silks and pieces with architectural details.”