All Roads Lead to Outer Space 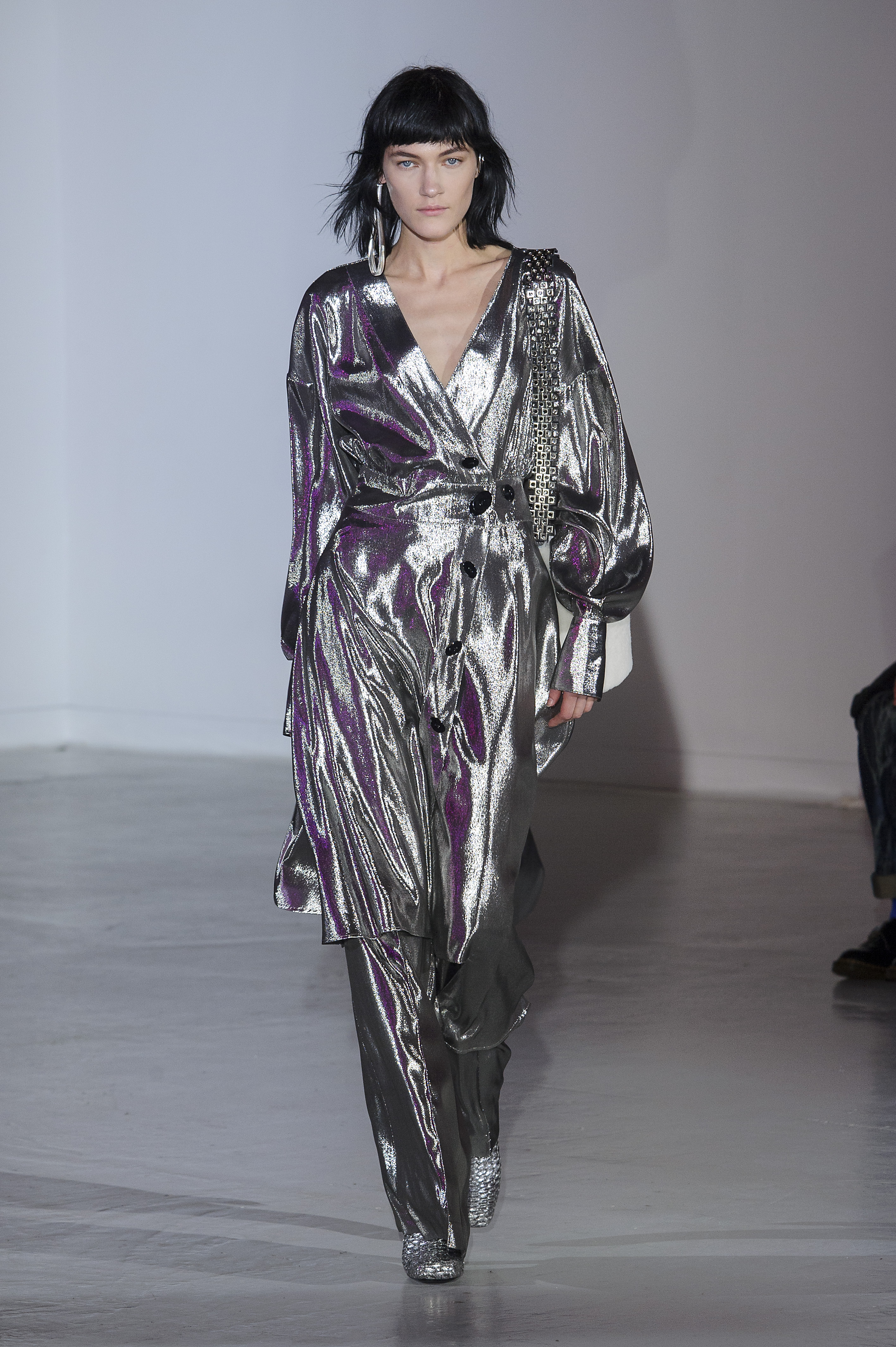 This season marked the re-emergence of space age-inspired clothing. First seen in the Sixties, and later recycled during Studio 54’s heyday space-age ensembles returned with a vengeance across New York, Milan, London and Paris in February. Brands such as Aigner and Christopher Kane Balenciaga, Philipp Plein andOff-White ensembles in futuristic shades of silver borrowed from astronaut suits and explorative puffer coats. At Paco Rabanne, Julien Dossena took us back to the future by seeking inspiration from far away galaxies presenting separates and dresses  cut from shimmering silver chainmail. David Koma’s highly exaggerated angular shoulders resembled alien attire and master showman Karl Lagerfeld blasted off even further into the stratosphere with his Chanel Ground Control show featuring sparkly moon boots and astronaut motifs as well as a set equipped with an enormous rocket that appeared to launch through the roof of the Grand Palais. 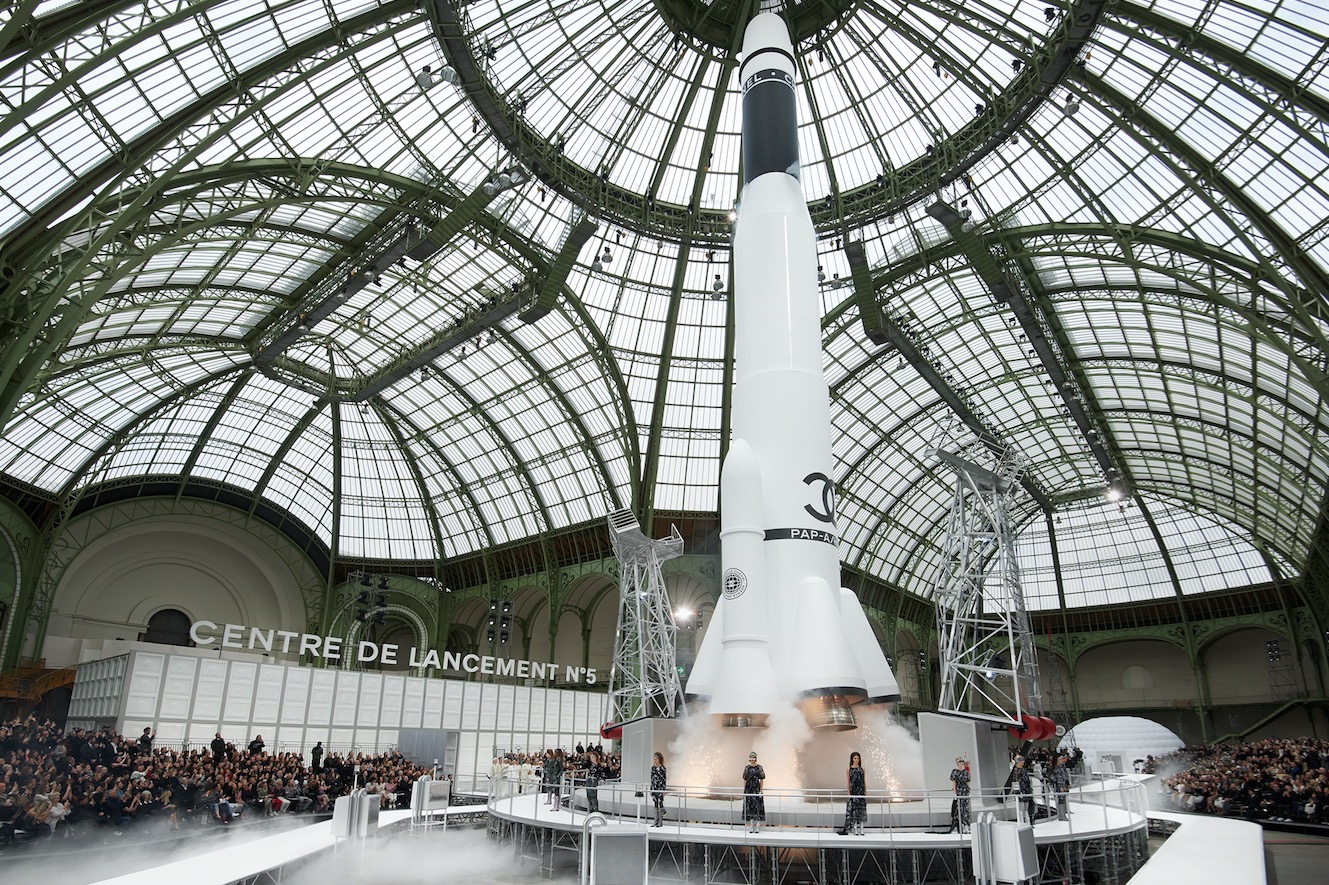 In order to understand why this trend is where and what it is today, it’s integral for us to return to the beginning. The space race of the late 1950s and 1960s between the Soviet Union and United States had a huge societal impact globally, inspiring and affecting the work of many artists, musicians, writers, filmmakers and designers. The era represented significant developments in exploration and unprecedented advancements in aeronautical achievements, which was reflected in the materials and silhouettes seen in fashion at the time. “Space Age style first appeared within the fashion world in the early 1960s when French designers like Paco Rabanne, Pierre Cardin, and Andrew Courrèges took inspiration from the Space Race and science fiction films to create sleek, minimalist, and, often, unisex garments in futuristic materials like plastic and metal,” explains fashion historian Dr. Kimberly Chrisman-Campbell. “ Their designs were dramatically different from the grand and elegant styles of leading haute couturiers,” notes Patricia Mears, Deputy Director of The Museum at New York’s Fashion Institute of Technology. “Inspired by space suits and rockets, these Parisian designers crafted radically new miniskirts and pantsuits which were sleek, reductive, and geometric, rendered almost exclusively in white and pale colors with metallic and plastic trimmings.” Courrèges’ work in particular, which earnt the designer a personal invite to NASA, stemmed from a deep fascination with space exploration which materialised in the form of white gogo boots, silver boxy dresses and goggles, while Pierre Cardin presented a collection complete with astronaut helmets and dresses cut from high-shine transparent vinyl. Rabanne was tasked with designing the costumes for the science fiction film Babarella which was released in 1968. Starring Jane Fonda in a series of futuristic yet undeniably sexy bodysuits, chainmail mini dresses and bikinis and white patent over-the-knee boots, the film’s outfits were not too far removed from Gucci’s present day intergalactic warriors in their ‘Gucci and Beyond’’ Autumn 2017 campaign. The Space Age era ended in 1972 with NASA’s last mission to the moon and Space Age-style waned simultaneously, giving way to the flares, maxi dresses and psychedelic prints that went on to sartorially define the decade. 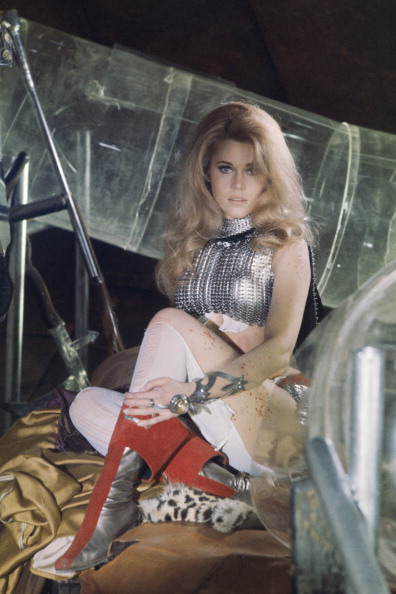 Fashion has long been a form of escapism for many, so perhaps this season’s return to futuristic clothing is not simply down to coincidence. Occurring amidst the political backlash against Donald Trump, heated climate change debates, the Brexit fallout and seemingly never-ending terrorist activity and threats, could the reemergence of this trend represent a desire for a better and brighter future, regardless of whether it’s on this planet or the next? “There is likely a link between space-age style and the current political environment. Fashion is a good social and cultural barometer because it can either embrace or reject the world at large. One could say that the anti-science sentiments of some populists have inspired some designers to proactively support the role of science and scientists, including those who work to advance exploration of the world beyond our planet,” reasons Mears. Meanwhile, Dr. Chrisman-Campbell has a slightly rosier outlook, “Historically, space-age style has been linked to optimism, not instability. I think its return reflects confidence in technology rather than government. Space X and NASA’s Mars explorations have ushered in a new space age, divorced from the geopolitics of the 1960s. A new generation of Star Wars and Star Trek films is making space trendy again. Fashion technology has advanced, too, giving us clothes and textiles produced with 3D printers and fiber optic cables. But many of this fall’s space age fashion are less futuristic than nostalgic for the more innocent era of the original space age. It’s a way of going back to the future.” 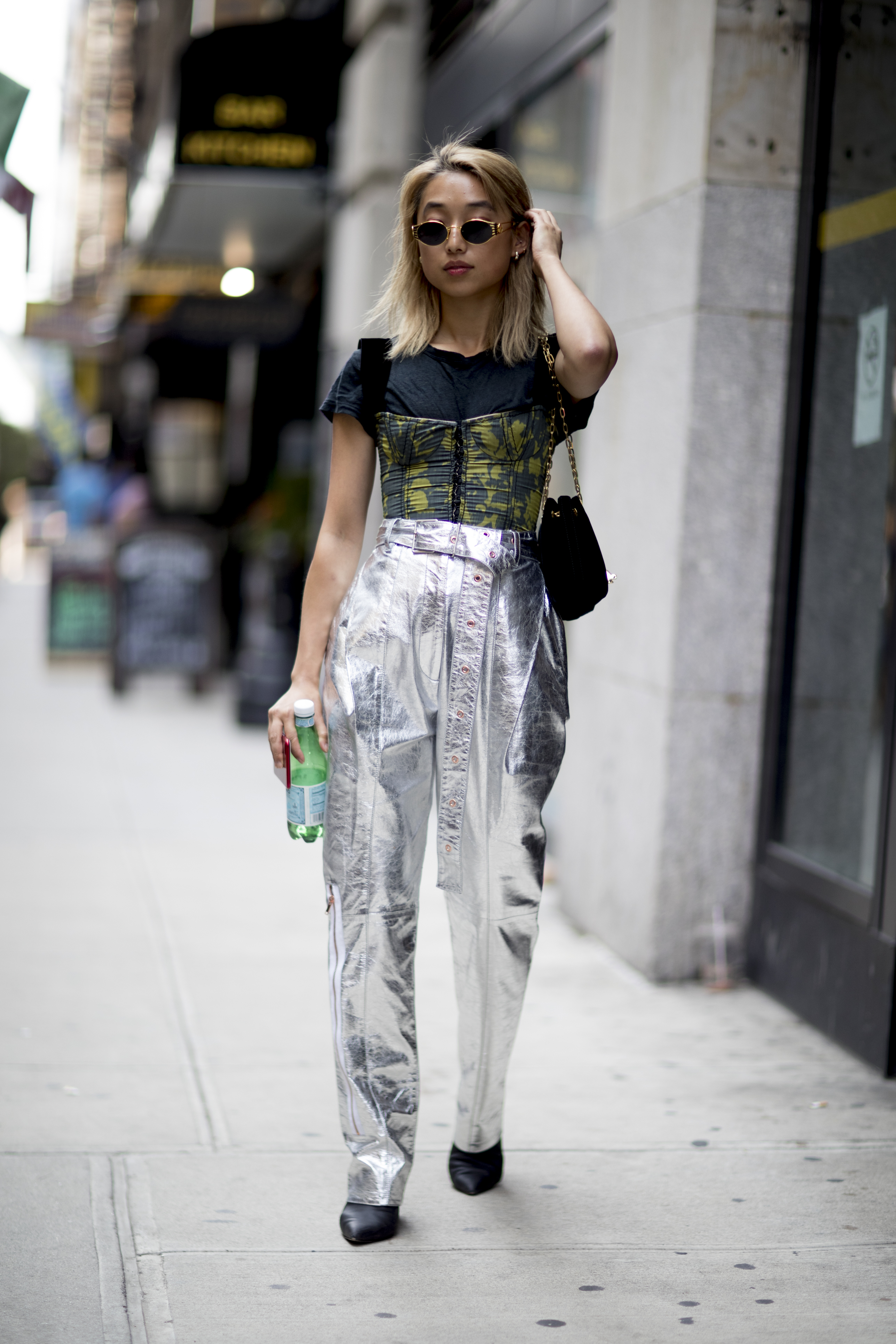 When it comes to incorporating elements of space age dressing into this season’s wardrobe, simplicity is essential. Picking one or two key separates that can easily be interspersed with clean and classic pieces is definitely the way to tap into this trend without looking contrived. “I think to invest in into this trend, I would go for  the silver skirt from Balenciaga,” advises stylist Anna Klein. “It has a simplicity that makes it work for any occasion and you won’t tire of it after wearing it a few times. My recommendation would be to mix  it with basics as a T-shirt, turtleneck, big sweater or vintage denim to get a relaxed, modern and fashionable look.” Accessories with a hint of playfulness such as Manish Arora’s colourful planet clutches or Chanel’s rocket bag are also worthy investments as they will hold their own from season to season. “I’m a big fan of the Paco Rabanne’s collection and the updated classics from Courrèges. There are also some pieces from J.W Anderson,  Loewe and Ann-Sofie Back in amazing fabrics and silhouettes.” 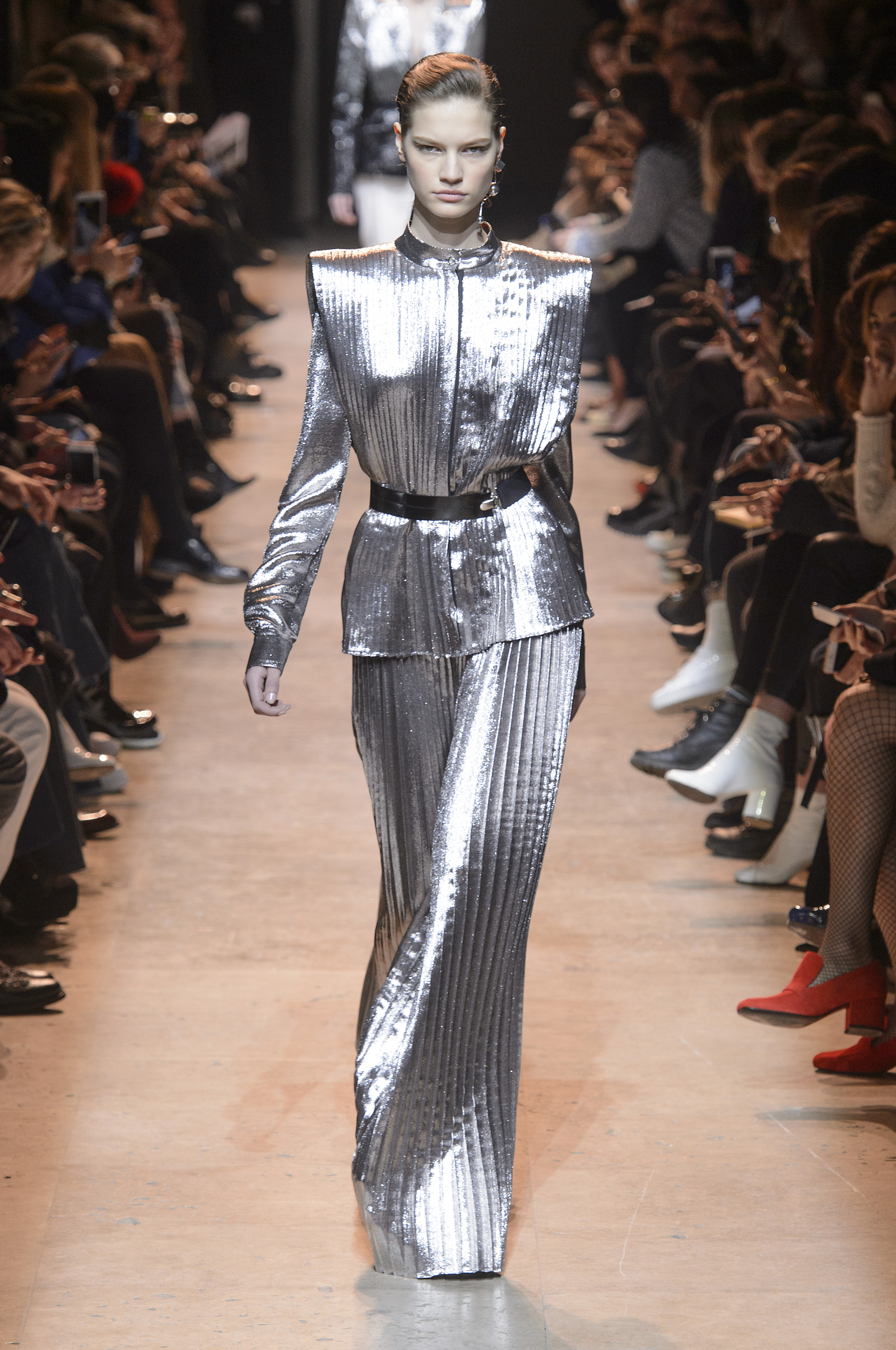 So where does that leave us? With innovator Elon Musk teaming up with NASA to probe the possibility of colonising Mars and Richard Branson’s Virgin Galactic poised to make its first suborbital flight by the end of 2018, it turns out that , but in the meantime, we’re more than okay with biding our time and making do with a pair of Chanel’s moon boots or one of Christopher Kane’s high shine metallic cardigans.

This XXL Saint Laurent Tote Is Summer’s It Bag