Under an October sky in the City of a Thousand Minarets, Cairo, Egyptian design duo and sisters, Aya and Mounaz Abdel Raouf opened their second concept store, Okhtein (‘sisters’ in Arabic). Set in Cairo’s promising retail area, Capital Promenade mall, their new space connects with the brand’s identity, complexity, and craftsmanship heritage, all in one modern design.

Aya and Mounaz knew from school age that they were going to be in the creative business, they just didn’t know where, exactly. Aya studied Communication and Media Arts, and Mounaz studied Marketing and Art at the American University of Cairo. “At first, we wanted to focus on furniture,” says Mounaz. But, something else swiftly caught their attention. In 2013, they went to Cairo’s Khan el-Khalili souk for some inspiration. “We saw artisans taking pieces of brass and putting them into a machine that moulds the brass. We saw this craftsman reshaping a piece of brass into a cone for his lamp shop, and that was amazing.” Egyptians are known for their brass craftsmanship, and the duo quickly tapped into this. “That was our ‘ah-ha’ moment, to recreate and modernise through accessories, bags and jewellery,” remembers Aya.

The two went to work building their accessories brand and in 2014 they launched Okhtein by selling online. With the help of social media and garnering a cult following the sisters have managed to succeed in Egypt and internationally. They produce in Spain, the UAE, Italy and Egypt and they are available at retailers around the world including Harrods, Les Suites Paris, Bloomingdale’s UAE, Harvey Nichols Riyadh, and Saks Bahrain. Celebrities from Kourtney Kardashian, to Beyoncé, to Gigi Hadid have all been seen with an Okhtein handbag under their arms. This new flagship store represents the sisters’ different and yet intertwining personalities. As you set eyes on the shop, you’ll find a spatial discover that attracts customers into the journey of their handcrafted creations. The sisters’ personalities are poles apart yet somehow intertwined, which can be seen throughout the space which melds both edgy and soft finishings. 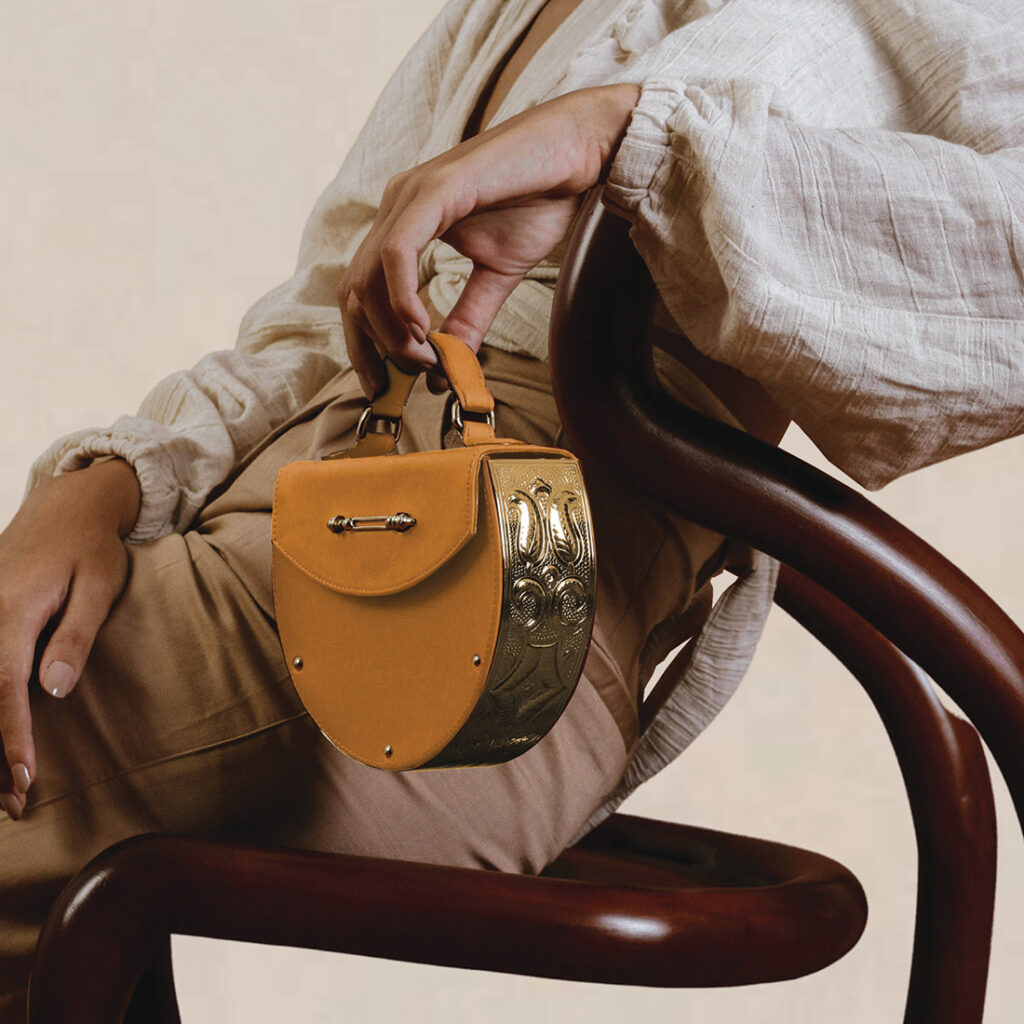 A piece from Okhtein’s latest collection

“This store is our baby, it’s our dream and we worked really hard for a year and a half to make this happen,” says Aya. For this, the sisters chose Lebanese designer, Walid Zeidan of WZ Architects to complete the design of the store. “The hardest part was finding an architect to translate our vision and our two characters into a retail experience, as well as the journey of two sisters; Walid did this.”

The new flagship is defined by two main directional lines that turn into triangular volumes that create a strong dynamic form. “Our logo is brass with one arrow going left and one going right, yet at the same time they are both connected,” says Aya, and this is how the store is set up, with the logo as its guide. On opening night, guests flowed down these directional lines, discovering the various handbags, leather products, and the brand’s evolution. The new store is made to create a lively synergy, since Aya and Mounaz were keen to enhance the experience of shoppers while highlighting the products on display.

The legacy that Aya and Mounaz want to leave in Okhtein is to impact fashion with artful statement pieces that are birthed from the fact that they are statement siblings. They’ve been this way since launching the brand in 2014 with the aim of showcasing Egyptian brass craftsmanship – something that the world may not realise this pearl in northeast Africa possesses, along with their Middle Eastern eye for design. Shop Okhtein at okhtein.com

Triple Threat: The Three Accessories You Need This Spring

These Elegant Accessories Are Wearable Works Of Art