What do fashion shows and spectator sports have in common? They are created to be watched, to entertain, to capture our emotions and bring joy — when you’re on the winning side. For spring/summer 2021, Miuccia Prada wanted to draw on the connection between these two seemingly opposite performances, showcasing a sport-infused collection sprinkled with after-dark embellishments, staged on a stadium-style runway dubbed the Miu Miu Club. “This Miu Miu collection is about polarity – these are polar times. Everything is opposite. Sportswear and eveningwear, a moment of reality, a moment of fantasy. In life, you need both,” said Miuccia Prada.

Although communities of Miu Miu women watched the SS21 show from afar (tuning into their laptops and phones), the audience still took part in the presentation. Appearing on digital screens that lined the runway, in addition to live viewing parties across the world, Miu Miu’s phygital fans emphasised Miuccia Prada’s notion that like sport, fashion requires interactive spectators. Kick-starting with young model Lila Moss’ runway debut, the show called for mix and match separates, ‘90s-inspired athleisure, luxe loungewear and puffed-up, prom-worthy skirts. In essence, it was a teenage dream. 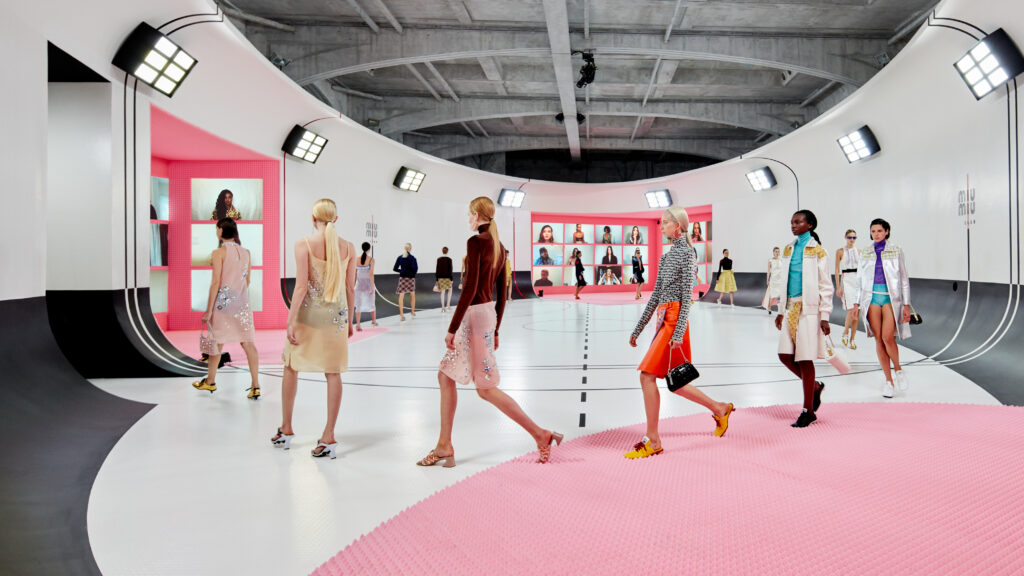 Bejewelled mini skirts were worn with striped polo necks and kitten-heeled tennis shoes; sheer ruffles shirts were layered under tracksuits; and ’50s-esque evening dresses were pared-back with trainers. “There is a focus on separates, because then you can be a mix of different women. Provocative, conservative, revealed, concealed…You dress with pieces of personalities, reflections of lives,” revealed Mrs Prada. The interchanging styles proved fresh and of-the-moment, with head-to-toe new season looks deemed unrealistic. Instead, Miu Miu’s SS21 line introduced pieces that could effortlessly slot into your existing wardrobe; a sparkling micro skirt could pep up a tired tee-shirt, a sporty blazer would easily elevate your loungewear game and a soft pink dress is destined to be thrown over a staple tank top for a multitude of occasions.

The collection called for self-expression — that kind that most explore in their youth — urging us to be sporty and pretty, feminine and masculine, fun and still serious. Miuccia Prada reminds us, that “the first spectator of yourself is you.”

Loewe’s New Capsule Collection Will Transport You Direct To California