“I am all about enhancing each woman’s unique character so that her power is magnified,” says Eli Mizrahi of Mônot

Talent, charm and a love of glamour is making Eli Mizrahi, the Lebanese designer behind New-York-based brand Mônot, one of the industry’s rising stars. For Mizrahi, a creative consultant-turned-designer, today’s woman is both sensual and self-confident, and his svelte designs merely assist in amplifying that attitude. He’s best friends with supers such as Ajak Deng and Madisin Rian, while the likes of Kate Moss and Alek Wek are only two of the fashion heavyweights starring in Mônot’s autumn/winter campaign. What’s more, just two seasons in, his collection previews in Paris garner an audience brimming with fashion’s A-listers. Captivated by his penchant for ‘sexiness’ within a landscape that currently favours sentiments such as ‘bohemian’ and ‘athleisure’, we sat down with the designer who is re-writing all of the rules.

Tell us about the Mônot woman.

She loves modern luxury and sleek minimalistic sophistication. She is also strong, has a point of view; is self-aware, and has a very clear vision of what she wants out of life. She knows what she looks good in and she is unafraid to go after what she desires. Smart, powerful, and sexy, she sets and accomplishes her goals, enjoys a worthy challenge, and is all about making her dreams come true. And finally, for the Mônot woman, age is just a number; what it all really comes down to is attitude. 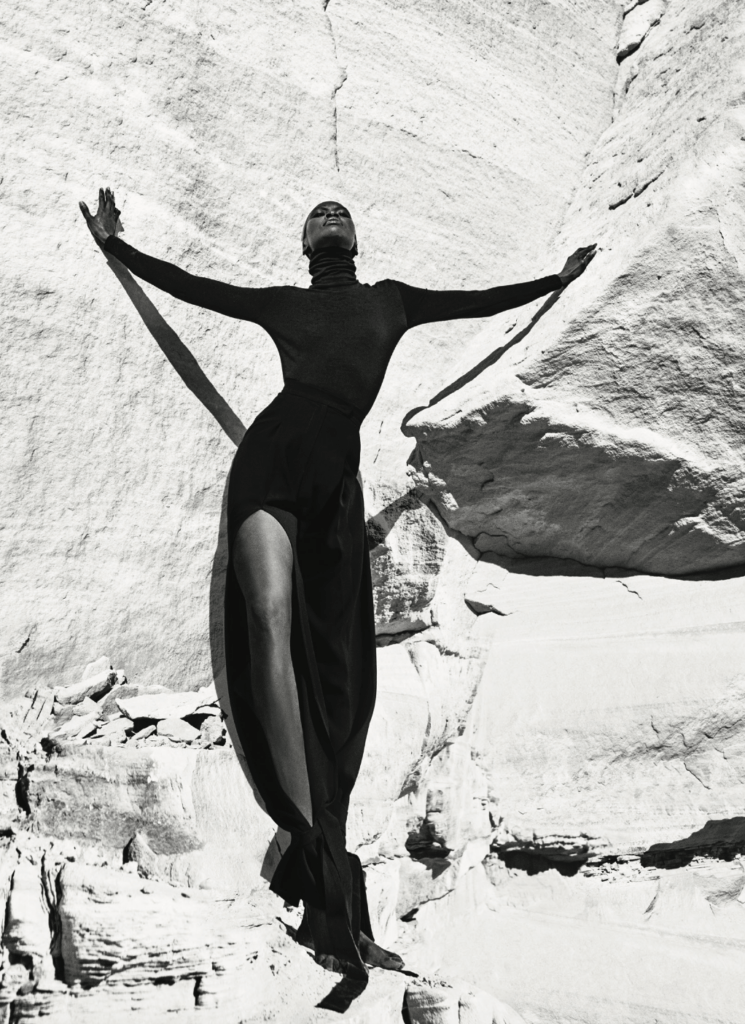 Is she a result of her times or has she always existed?

The Mônot woman has always existed. It’s just that today she is feeling more empowered to speak out, stand up, and stake her claim on the world in a way she couldn’t have in the past.

How do you want your designs to make her feel?

100% herself. I want my clothing to be a framework for her inherent strength, self-confidence and sensuality. I am all about enhancing each woman’s unique character so that her power is magnified.

You once said: “The bad girls are my top priority! Those are the ones who are going to support my brand and buy my products.” We’re intrigued…

What I meant by this is that my clothing is designed for women who like to be the centre of attention. They are the ones who blaze a path by challenging the status quo and pushing the envelope. The “bad girls” of today are breaking the rules that need to be broken. 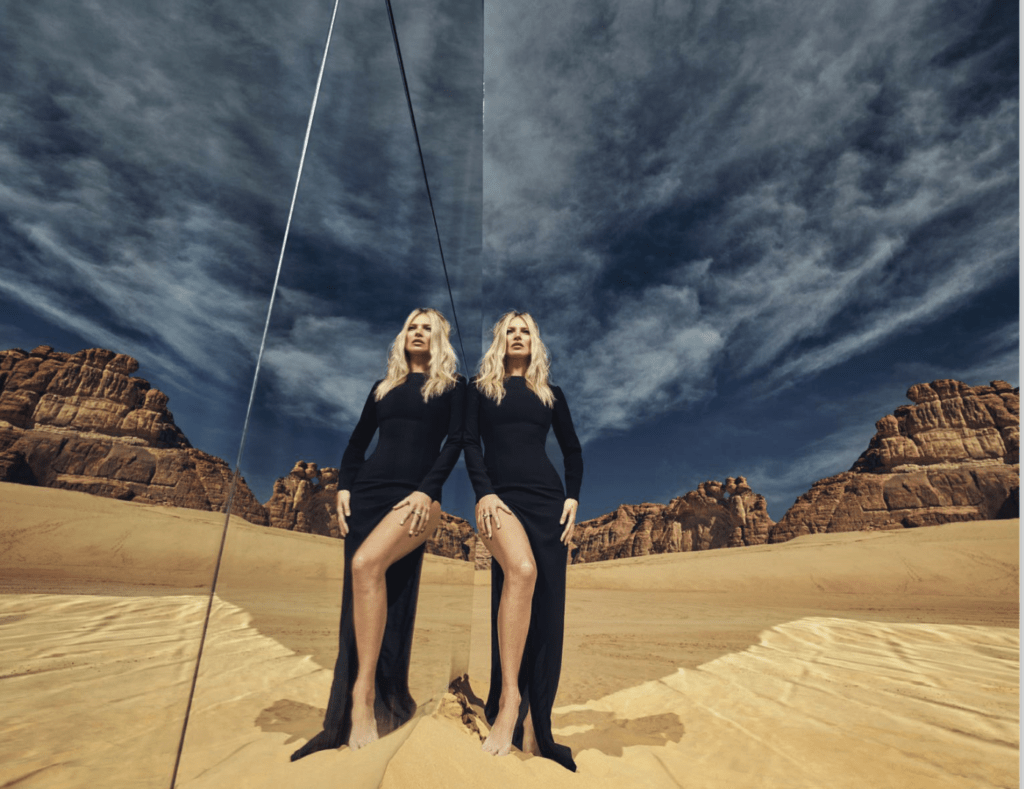 You moved from the Middle East to New York as a political refugee as a teenager. Were there any moments that served as a catalyst for creation?
What I remember most about that time, arriving in New York as a kid, was how overwhelmed my siblings were by the energy of the city; of how fast-paced and dynamic everything was. They had a hard time with the city’s rhythm. I, on the other hand…well, it felt like a homecoming really. I just immediately fell in love with the city and all the potential I saw there to reinvent myself and become who I always wanted to be. And you can see that reflected in my work. Everything I create is about transformation.

Your own personal style is celebrated for its expressionism and flamboyancy – think tangerine pyjama suits, patchwork pants and surrealist suits. Do you enjoy dressing up?
It should come as no surprise that, like the women who wear my designs, I too like to stand out. Life is too fleeting to live it sitting on the sidelines. I plan on creating a life for myself and by extension, that of my customers that is lled with unforgettable moments. They say “dress for the job you want,” I say dress for the life you want! 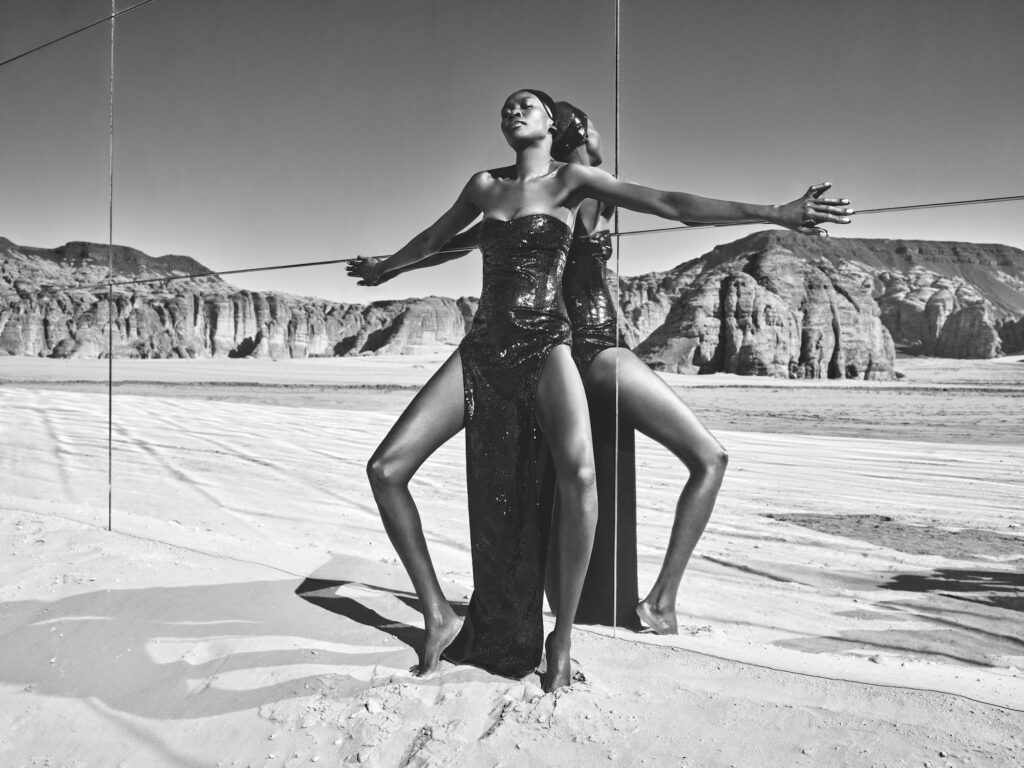 What would you tell other creatives looking to cut their fashion teeth in New York?
New York is a city where everything is possible. You can come from anywhere in the world and if you work hard enough in New York – and make it – you can pretty much accomplish whatever you put your mind to. Jay-Z said it best in his song “Empire State of Mind: “Since I made it here, I can make it anywhere.”

You’re now two seasons into the Mônot brand. What do you most love about the design world?
Designing centres me and grounds me. But at the same time, it creates a space for me to let my imagination run wild. I can dream big, like having Kate Moss star in my first-ever advertising campaign, and I can make my dreams come true. I love how fashion design is such a perfect hybrid of creativity and business. I get to work both sides of my brain.

Talk us through the inspiration for your AW20 collection.
This season I was inspired by the contemporary artist Lucio Fontana and the architect Eero Saarinen. The collection is grounded in a geometric concept where strong-lined silhouettes and peekaboo opening on the garments create a neo- futuristic tone. 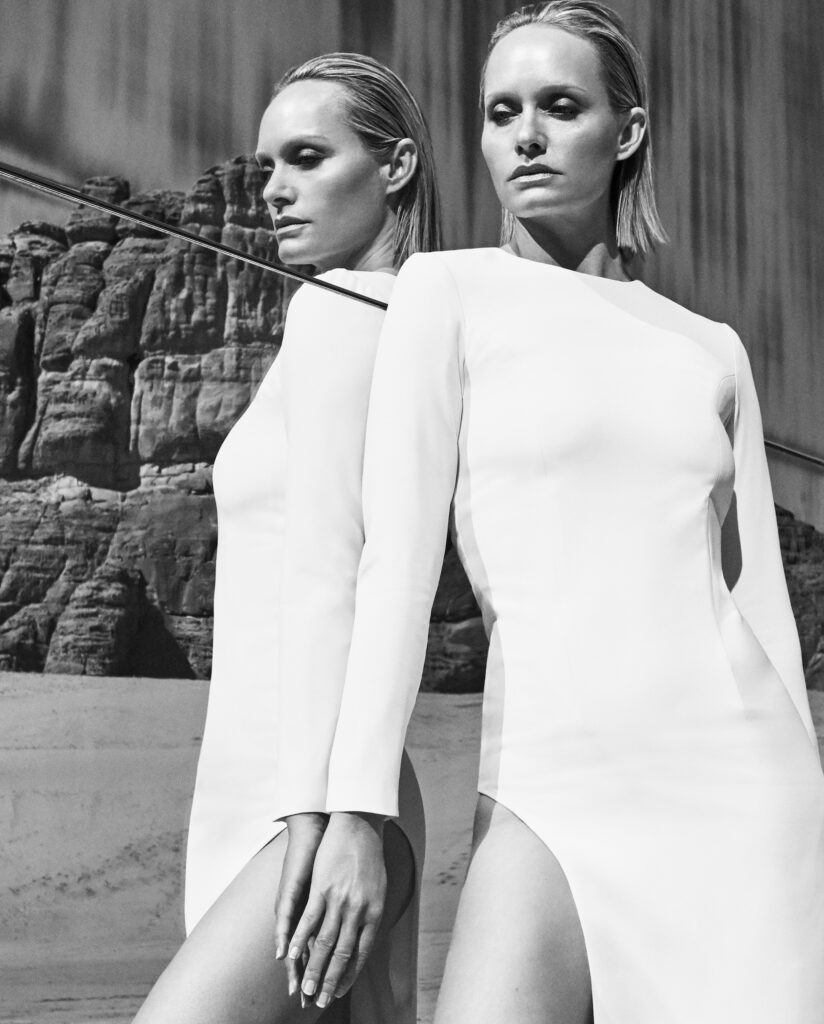 The campaign was shot in Saudi Arabia, AlUla specifically. What made you choose the country as the backdrop to the collection?
I got the opportunity to visit AlUla last December and I instantly knew this is where I wanted to shoot my first campaign. There’s something about its unique nature and landscape that I was immediately drawn to. This is the first project of its kind that has ever taken place in AlUla and I feel extremely honoured that Mônot can be a symbol of the country’s transformation.

Among others, Alek Wek, Kate Moss and Candice Swanepoel star in the campaign photographed by Luigi & Lango. What attracts you to these women?
All of these women are modern icons. I wanted to include women of different ages, ethnicities and backgrounds in the shoot. For me, it was about who they are as individuals. They are all-powerful women who are totally in touch with their inner strength and in tune with their bodies.

And in terms of Middle Eastern icons, who are your muses?
Off the top of my head, Sabah comes to mind. Also Haifa Wehbe. And of course Nancy Ajram, who has been such a big supporter of mine since the beginning. 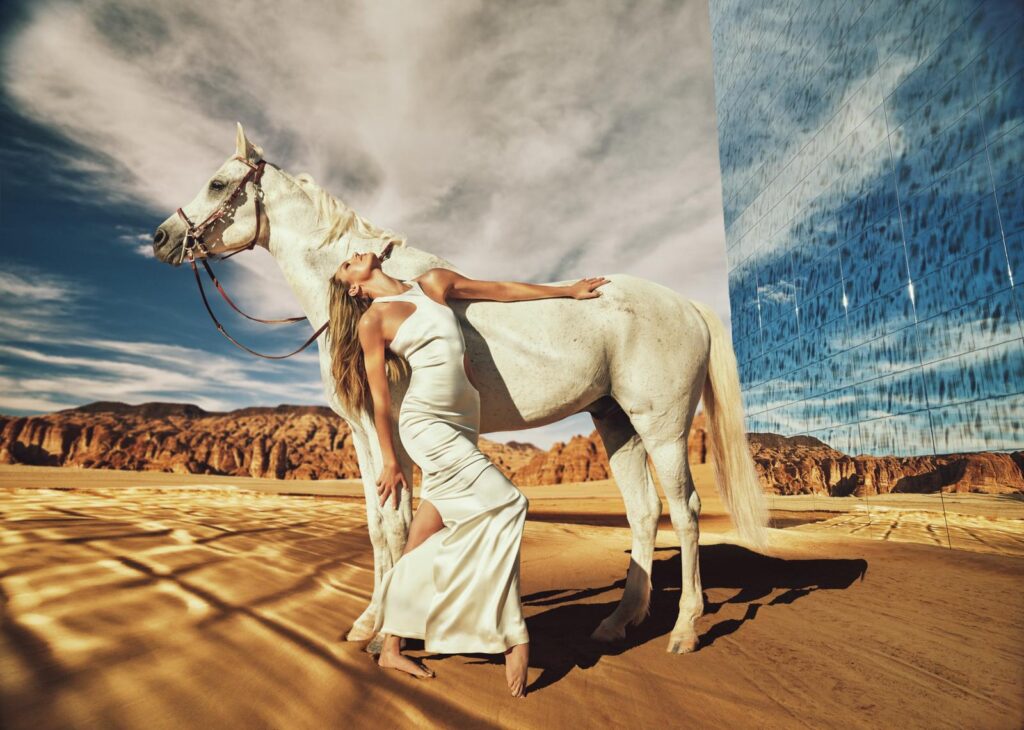 Your patternmaker and seamstresses are in Lebanon. How did you find them?
Originally I wanted to produce my collection out of New York but as a brand- new label, it was quite challenging to find a sampling house with bandwidth left after serving the big labels. So I turned to Instagram and I started interviewing pattern makers from all over the world. I ended up working with an amazing professor from ESMOD in Beirut. As I mentioned, Lebanon is where I was born, so it served as an opportunity, after 30 years, to once again reconnect with and find inspiration in my roots. Together we reached out to a community of female Syrian refugees for the craftsmanship and that is how the rst collection was born. It makes me incredibly proud to know that the work these women are doing is helping them build a better life for their families.

You were born in Beirut, Lebanon. How has your Lebanese heritage influenced your design philosophy over the years?
It’s true that I was born in Beirut, but I was raised in Monaco and then I moved to New York when I was a teenager. I think my design DNA is a bit of a melting pot of all of the amazing places I have been lucky enough to have lived or visited during my lifetime. But of course, Lebanon will always hold a special place in my heart. 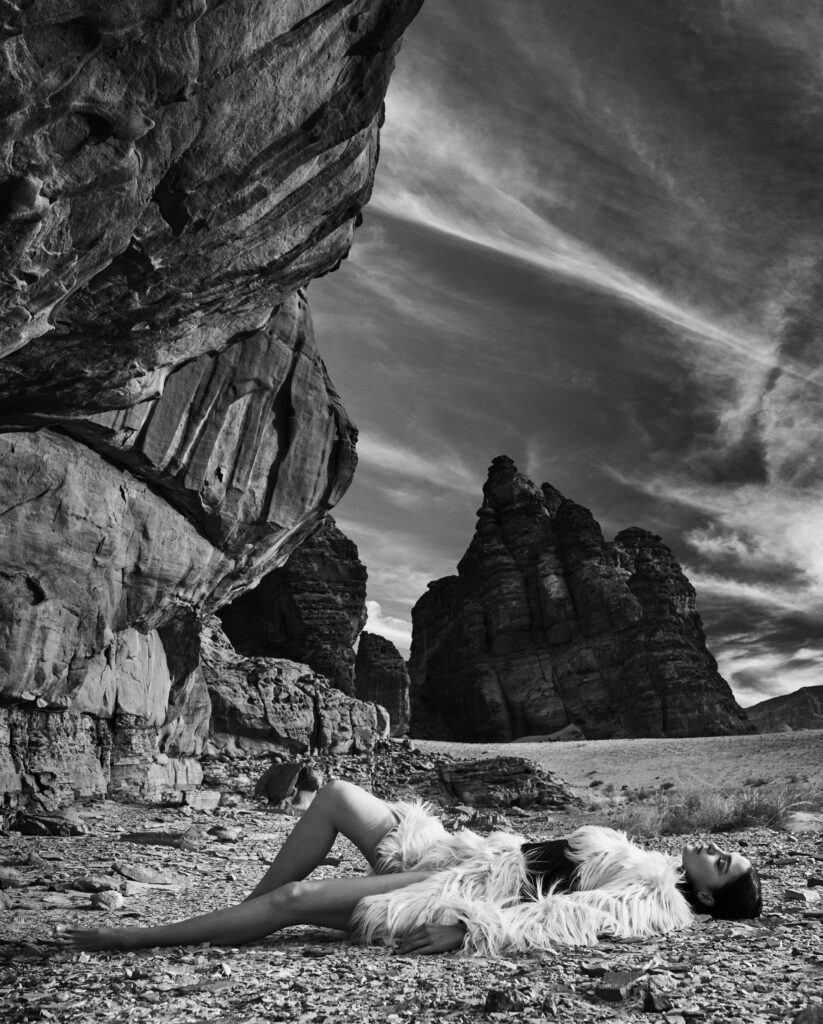 Can you put into words how you felt after the devastating explosion on August 4?
I am heartbroken. Beirut was once called “The Paris of The Middle East”, and now it is just decimated. I am deeply saddened about how an amazing country like Lebanon, with its rich cultural history and fantastic culinary traditions, not to mention its warm, generous, and hardworking people are suffering under the utterly soulless government.

How has the explosion affected your business?
I am extremely fortunate in that my business is, for the most part, based out of Paris and New York. Only some of my original samples are made in the city, so I was not affected in the same way as my fellow Lebanese designers who have studios in Beirut. I did, however, lose my apartment in the blast. But that is nothing compared to what others have lost. I have seen images of the wreckage that were once the design studios of some of my peers and it breaks my heart. 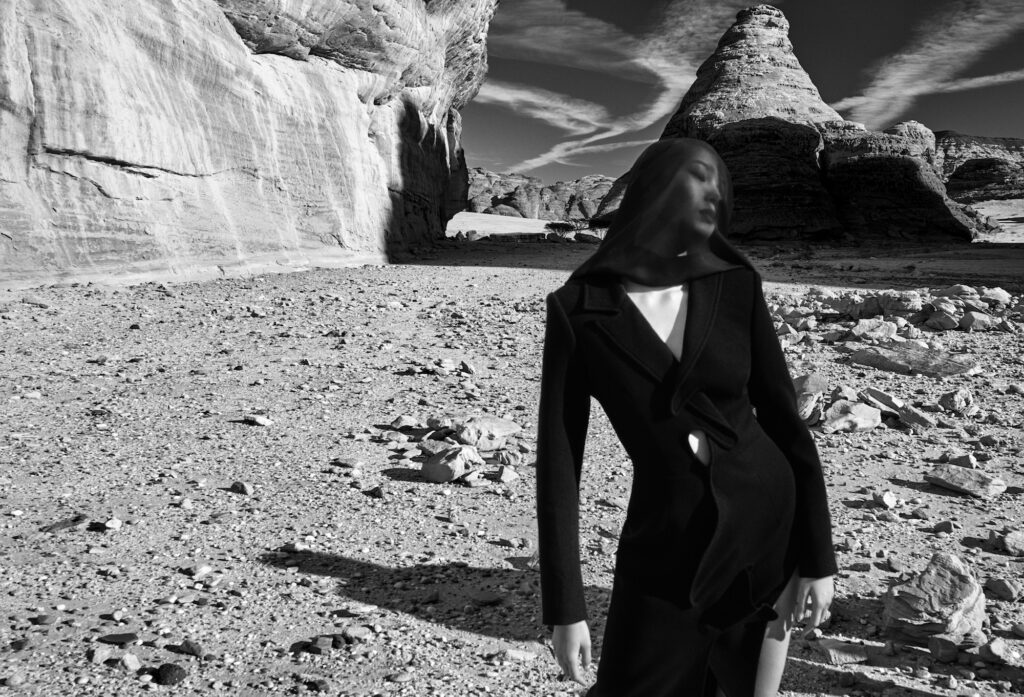 How are you trying to stay positive during this time and what is your hope for the future?
My hope is that this horrific explosion will cause the world to finally take notice of the plight of Lebanon. That international oversight can be put in place to make fundamental changes to the way the country will be run in the future. It is clear that this is what the Lebanese people want. The one thing I do know for certain is the Lebanese people are incredibly resilient. They will use this tragedy to galvanise the people to bring about change in the country. The will of the Lebanese people is strong and they dream big.

Read Next: Emilia Wickstead on designing dresses that empower women

From the Ashes We Will Flourish: The Beirut Designers Rising From The Rubble