Is This The Death Of The Stiletto? 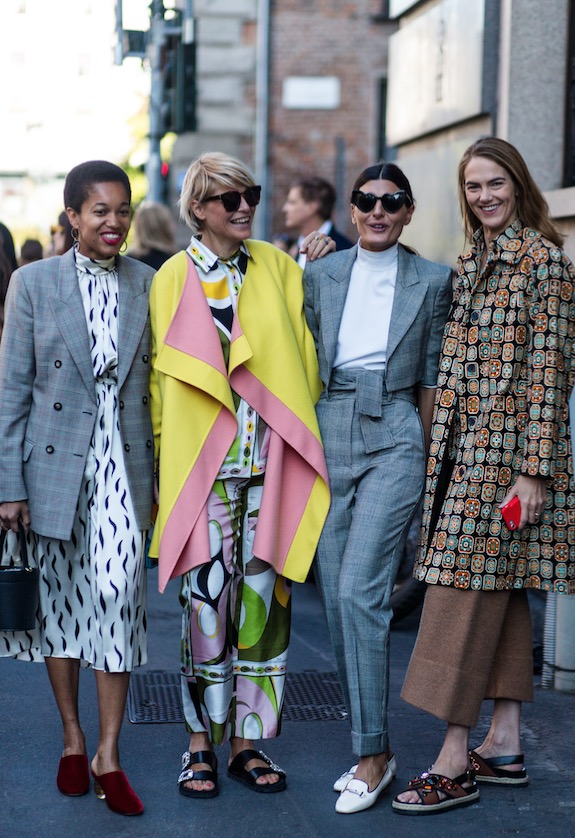 As a fashion journalist I’ve always been a sucker for a pair of high heels. My relationship with  stilettos is akin to that of a long, drawn out love affair which started with a pair of horrendous highlighter pink pumps when I was 12. Fast forward to today and my love of heels causes my heart rate to accelerate significantly whenever I near the vicinity of a Manolo Blahnik or Jimmy Choo store – I once even rented out my car parking space to buy a pair of Manolos and in January of this year I actually had tears in my eyes when Saint Laurent’s Opyum logo-heel pumps landed on my desk – sad, but true. However, over the past year and a half the unthinkable has happened and my shoe spending habits have changed significantly. It all started with a pair of swoon-worthy Emporio Armani embossed snakeskin brogues. Not only did they look incredible, they were unbelievably comfy and went with everything from jeans and shorts to dresses and skirts. Buoyed by the astounding practicality and many compliments garnered by this initial purchase, my next buy was an orange pair of Nicholas Kirkwood’s Beya flats, subsequently followed swiftly by a leopard print pair of Figue’s backless slippers, some monochrome Phillip Lim Martini kitten heel sandals and Anniel’s sequin sneakers in quick succession. It wasn’t until I found myself losing sleep over whether or not I should be investing in some ponyskin slides did I realise the extent of my change in alliance, had I consciously uncoupled with high heels? 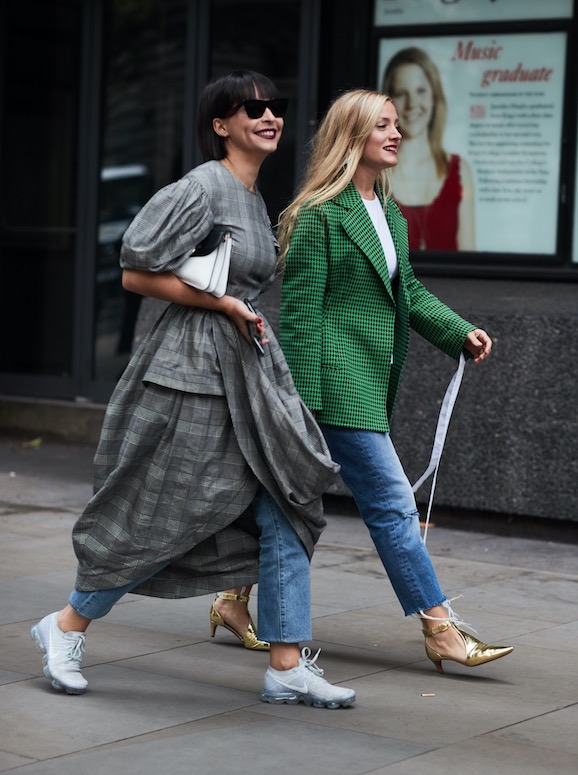 As it turns out I’m not the only one switching teams, actress Emma Thompson was first to the punch during the 2014 Golden Globe Awards where she took the stage barefoot and declared, “I’ve taken my heels off as a feminist statement, because why do we wear them? They’re so painful. And pointless, really.”  Following the controversy at the Cannes Film Festival in 2015 when a group of women were prevented from entering a screening for not wearing heels, many actresses voiced their opposal of the rules, including Julia Roberts who chose to walk the red carpet for her film Money Monster barefoot. Just last year Victoria Beckham, who was once the poster girl for towering stilettos, famously announced that she, “Just can’t do heels anymore.” A far cry from her “I can’t concentrate in flats” statement of 2008.  More recently French actress Gal Gadot, was spotted wearing flats on the red carpet to the premiere of her film Wonder Woman. Emma Thompson, VB and Gal Gadot aside, millions of women around the globe feel the same way. Industry statistics demonstrate that for the first time ever sales of flat and mid heel height shoes are in fact outpacing that of stilettos. In the Unites States sales data indicates that in the year ending July 2017 heels with a height of 1.5 to 3 inches overtook that of heels 3 inches or higher by 3 per cent. While that may not sound like a lot, it is a drastic change in results from the previous two years which had high heels outselling lower heeled models by 8 and 14 per cent. According to analytics firm Edited, mid heel shoe styles are selling out at an increased rate of 71 per cent year-on-year, while higher heels have decreased by 26 per cent. In the United Kingdom, consumer analysts Mintel recently published a study that shows 37 per cent of British women purchased trainers in the last year compared to 33 per cent of women that bought heels. Further to that additional research they conducted demonstrated that a whopping 59 per cent of women prefer to wear flats compared to a tiny 12 per cent minority that prefer heels. 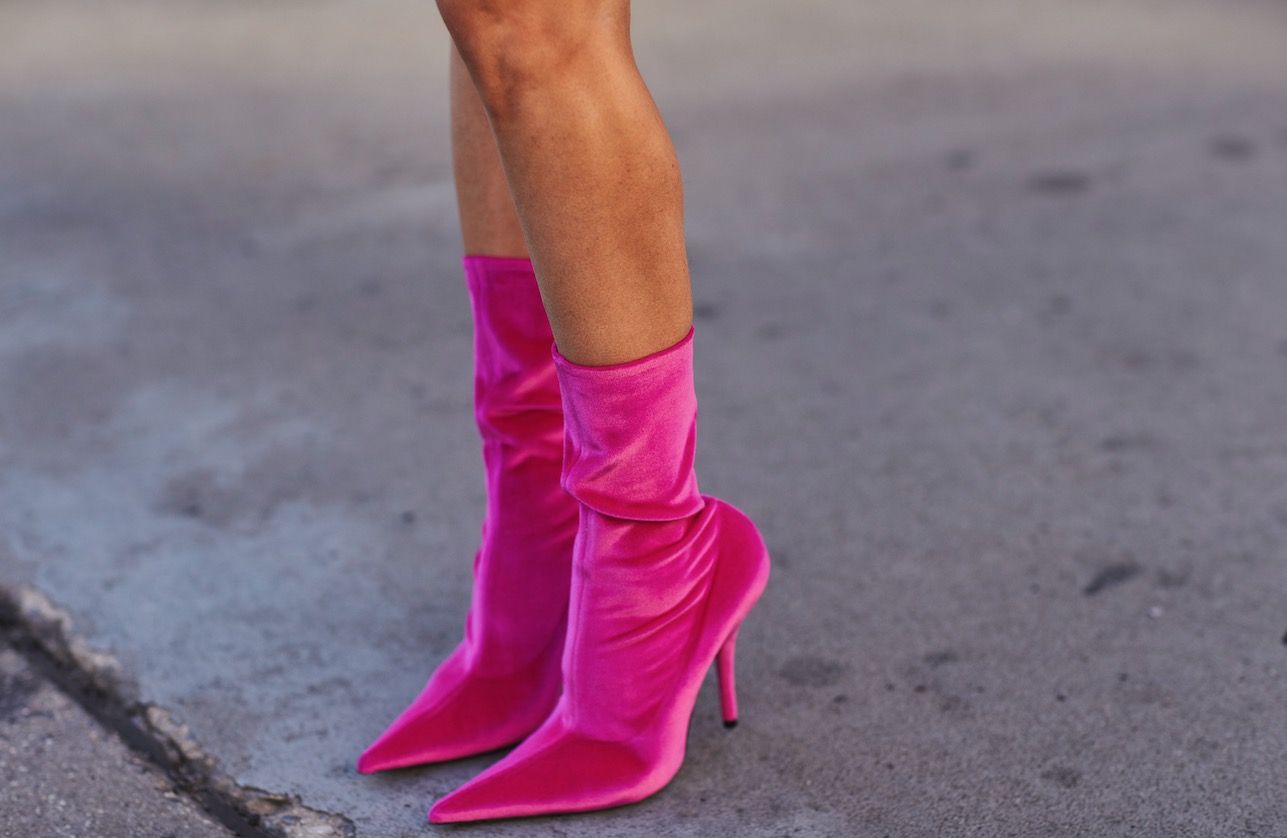 The beginnings of the switch to mid and lower heel heights can be traced back to 2014 when the athleisure effect saw high fashion heavyweights such as Chanel and Dior send sneakers down their runways. A refreshing change from the boring ballet flat, countless other brands followed suit and trainers by a wide range of designers from Alexander Wang and Adidas to The Row and Tod’s inundated the footwear market, finding their way onto the feet of fashion’s elite. Interpreted widely on a street style level, women started to wear trainers with everything from midi skirts to mini dresses. Hot on the heels of the sneaker movement, flat and mid heel height shoes also started to emerge amongst designer collections. From chic leather espadrilles and suede slingbacks to block heeled mules with baroque embroidery and marabou-trimmed slides, the past few fashion seasons have seen designers really up their game when it comes to flat, low and mid heel height shoes. This year has been all about the resurgence of Nineties staple the kitten heel  with brands like Balenciaga, Miu Miu, Prada, Gucci and Vetements offering us highly covetable and wearable versions that are proving to be the new must-haves – Dior’s kitten heeled slingback even has a month long waiting list. “Trends are cyclical and the stiletto definitely had a long moment, but I think a flat and mid-height shoe feels fresher and more modern, while speaking to the Sixties trend,” notes British footwear designer Tabitha Simmons. “It also is more comfortable and lends a sense of effortless glamour to any look.” 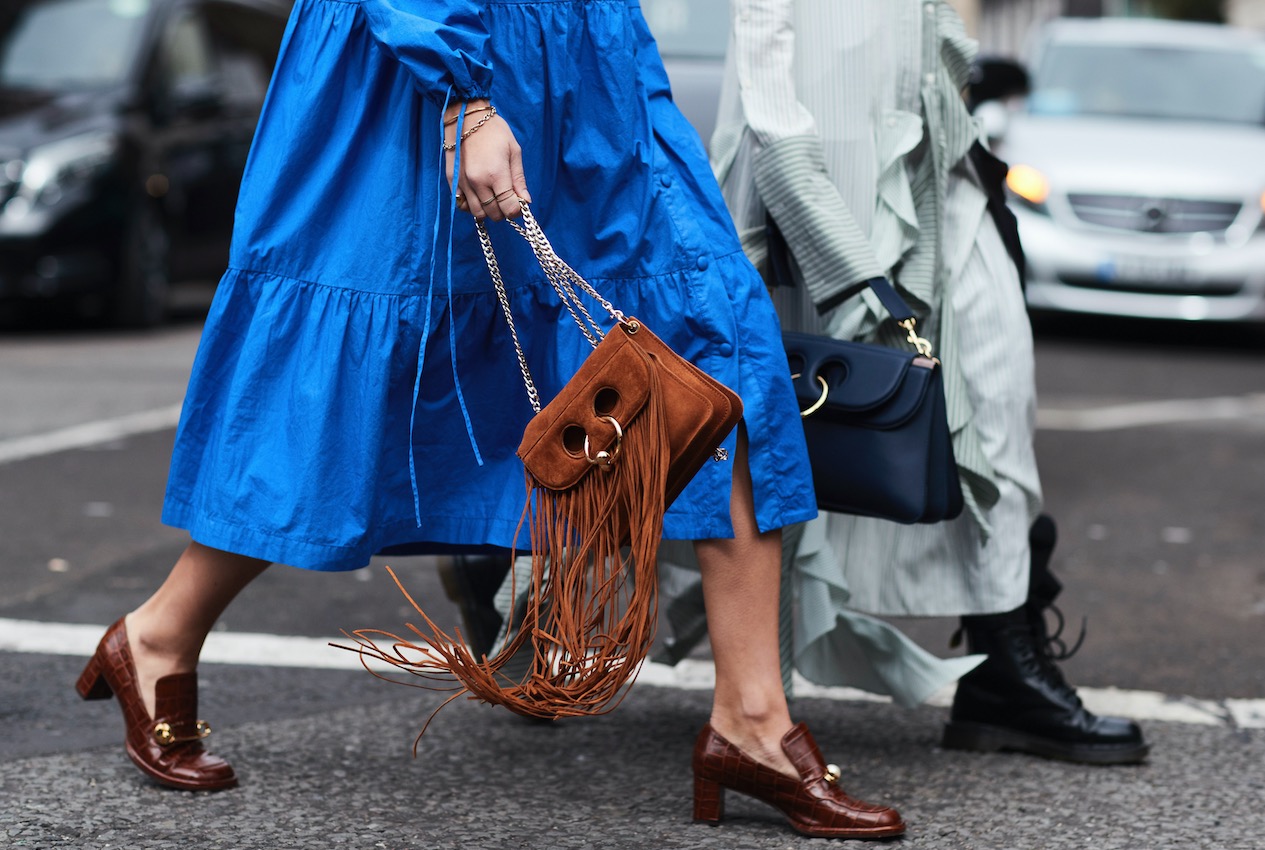 This move towards function and practicality isn’t solely driven by trends though. It comes as no coincidence that the amidst the issues affecting women globally on the political spectrum, a new form of power dressing is emerging. Women no longer want to be restricted or constrained by impractical clothing. In the UK this year there has been much debate and outcry about whether or not women should be forced to adhere to sexist dress codes requiring them to wear heels to work after receptionist Nicola Thorp was sent home from work, without pay, for wearing flats to the office. “The traditional notion of female power dressing has changed quite a bit and female identity has taken center stage with recent events, so a link between style choices and the current climate is definitely there,” explains Nicholas Kirkwood. “There’s also a shift in perceptions about workwear and dress codes.” With many women juggling careers and families, mid and low heel heights do provided greater stability and comfort than a pair of heels. “The world is a scary place at the moment,” laments fashion historian Dr Kimberly Chrisman-Campbell. “We’re all looking for comfort, softness, and security. Informality is the new normal; when CEOs wear hoodies to work a pair of flats don’t look out of place.” 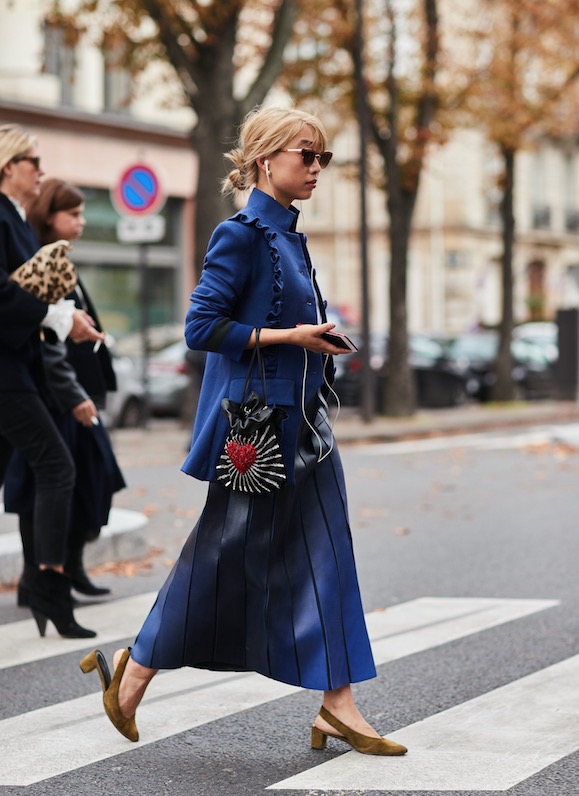 “I think it’s to do with women living an active lifestyle,” Mary Alice Malone of Malone Souliers tells me, “ they want to go places, do and see things, therefore they need a shoe that enables them keep up with the pace of their life.” It’s a concept Simmons, a mother of two, completely understands. “For our generation more so than any other, women are multi-tasking with careers, motherhood and relationships. The trend for a lower heel is in a way a sense of empowerment for us; we can look chic but feel comfortable and achieve all our daily lives demand of us.” 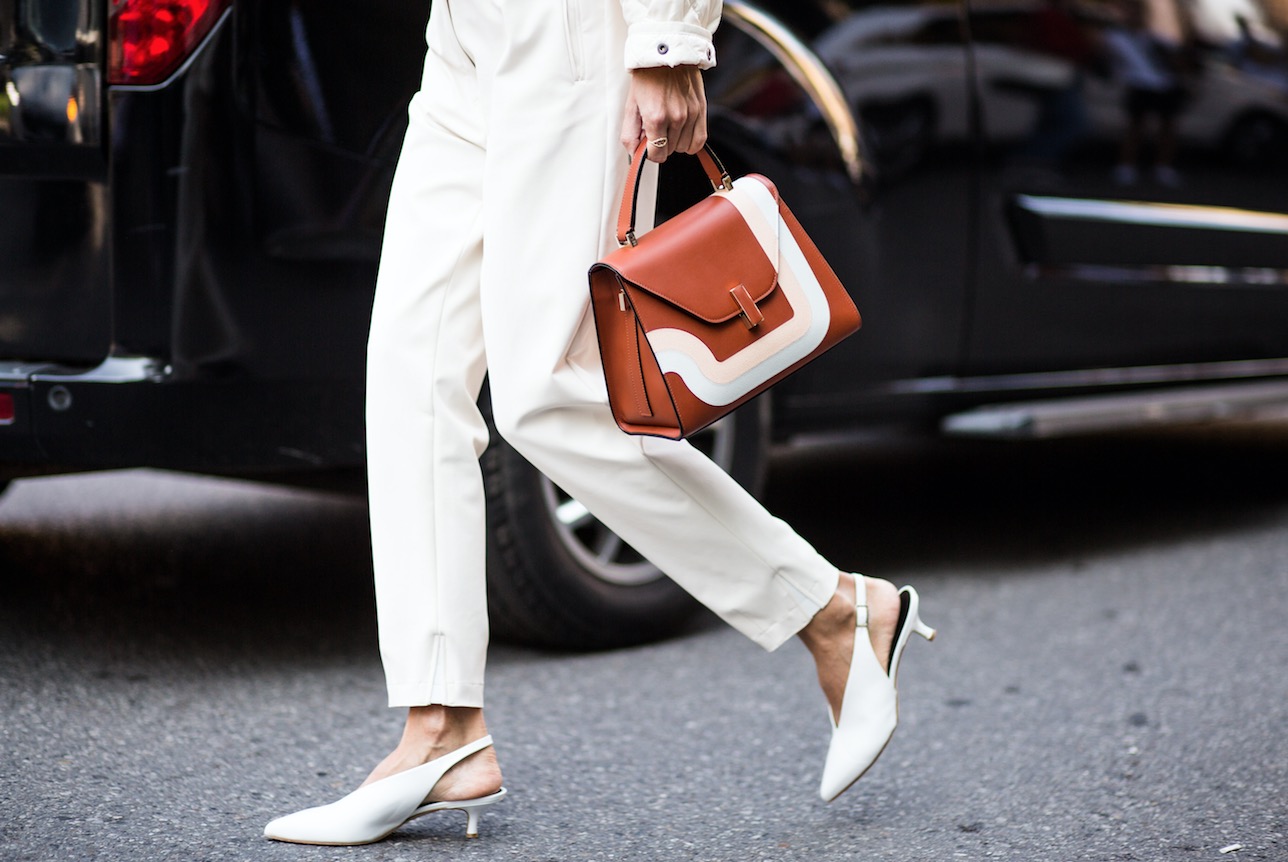 With the dust having just settled on fashion month, a quick analysis of the spring/summer18 collections indicates that mid and lower heel heights aren’t going anywhere anytime soon. From super colourful and feminine tasseled slides at Delpozo to espadrille combat boot hybrids at J.W. Anderson and Karl Lagerfeld’s perspex block-heeled rain boots at Chanel – which was arguably the shoe moment of spring/summer18, there’s still very much a designer focus on lower heeled shoes. Currently, on a regional level, stiletto heels are still performing incredibly well. “It’s always my most glamourous Charlotte Olympia heels that are the most popular in the Middle Eastern market,” Charlotte Dellal informs me. A fact that she attributes to the Middle Eastern woman’s love of glamour. However, attitudes and tastes are changing. “Classic high heel brands, such as Giuseppe Zanotti and Alexander McQueen, continue to perform extremely well in the Middle East market, where there remains a substantial demand for high heels, particularly for occasion dressing,” says Coco Chan, head of womenswear for Stylebop.com. “In spite of this, we have also seen an increase in demand within the region for luxurious flats. Flat mules have been a hit in 2017 – brands such as Malone Souliers, Delpozo and Marni have contributed to the ‘elevated slipper’ which is becoming a must-have in the region.” I feel a sense of relief and reassurance to know that the stiletto is still going strong here and in the midst of writing this piece I’ve received a ‘back in stock’ alert from Matches to let me know that those tear-inducing YSL heels are now available in my size again. If the huge flip-flop reaction of my stomach and spike of my pulse are anything to go by, it looks like I’m back in love again.