MOJEH meets designer-of-the-moment Christopher John Rogers, celebrated for fantastically enthusiastic pieces that are at once mood-boosting and commanding

The chaos caused by the Covid-19 pandemic, its numerous lockdowns and life-altering shifts pushed many designers to rethink the functionality of their work. Some turned away from the theatrics of fashion in pursuit of distinctly pared-back collections, while others scrapped entire business models, turned their back on the seasonal formula and began producing capsules and ‘drops’ only when demand dictated. Some simply leaned further into the aesthetic that had already served them for years. With a penchant for colour, excessive silhouettes and lots of luminescence, Louisiana-born, Brooklyn-based Christopher John Rogers falls distinctly into this last group. “We took this route because it’s true to us; it’s the core of the brand,” the designer tells MOJEH from his hub in New York City. “Volume, colour, tailoring, and offering clothing that I always try and lead with honesty and fullness, as opposed to trying to be someone else or something that I’m not.” 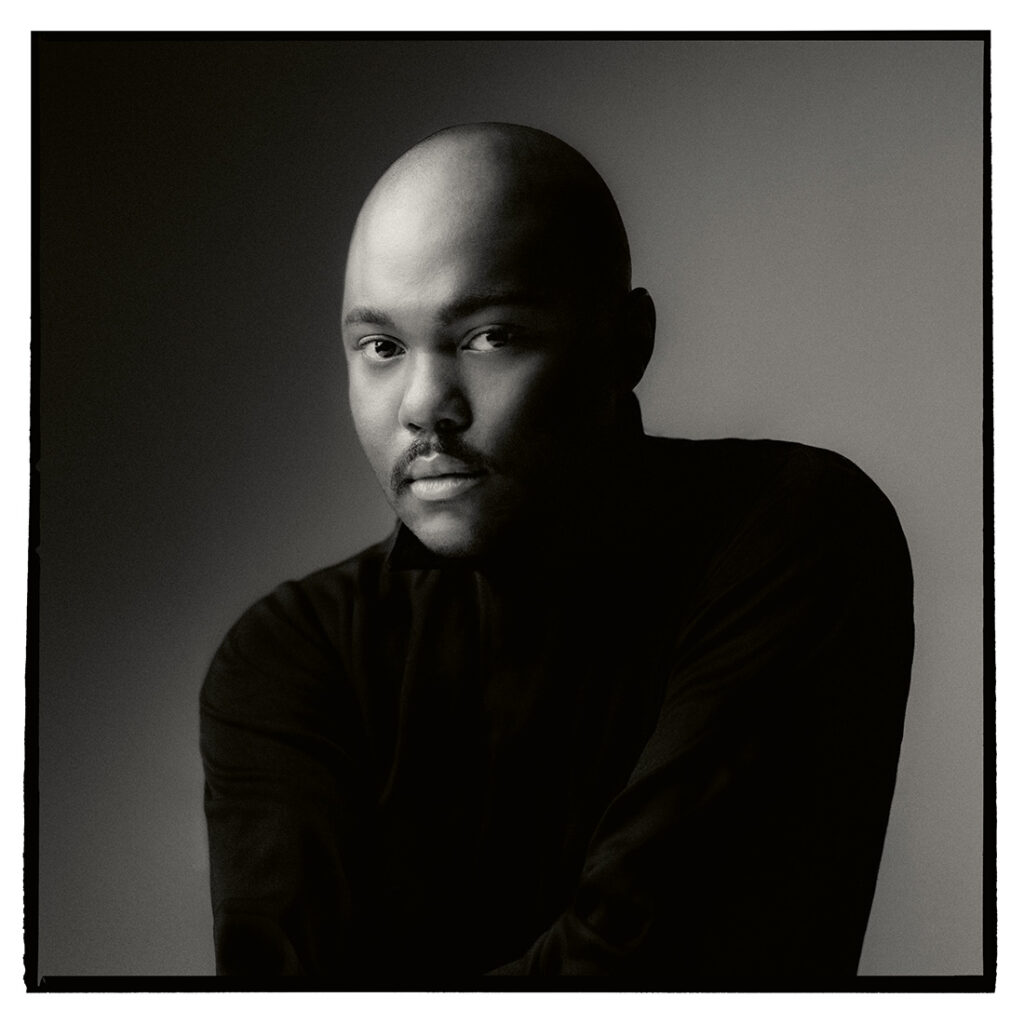 “Whether it’s physical space or visual space, I want the people who wear the clothes to feel empowered enough to not shrink themselves,” says designer Christopher John Rogers

Rogers cut his teeth at The Savannah College of Art and Design and went on to work with the likes of Tanya Taylor, Rosie Assoulin, Chris Benz and Diane Von Furstenberg before launching his eponymous line in 2018. From day one his collections were confidently bursting with metallics, high-octane hues, sequins and iridescence. His audacious approach and ornate work was, according to Rogers’ art school professors, ‘out of touch and tacky’ (how wrong they were). “Whether it’s physical space or visual space, I want the people who wear the clothes to feel empowered enough to not shrink themselves. The clothes make you stand up tall and encourage you to be seen and push you towards a more declarative version of yourself – you can’t hide in these pieces,” he declares. Think lavish sweeps of neon in painterly prints, sleeves and waistlines puffed-out to the extreme, and generous tailoring that swishes and swooshes with every step. 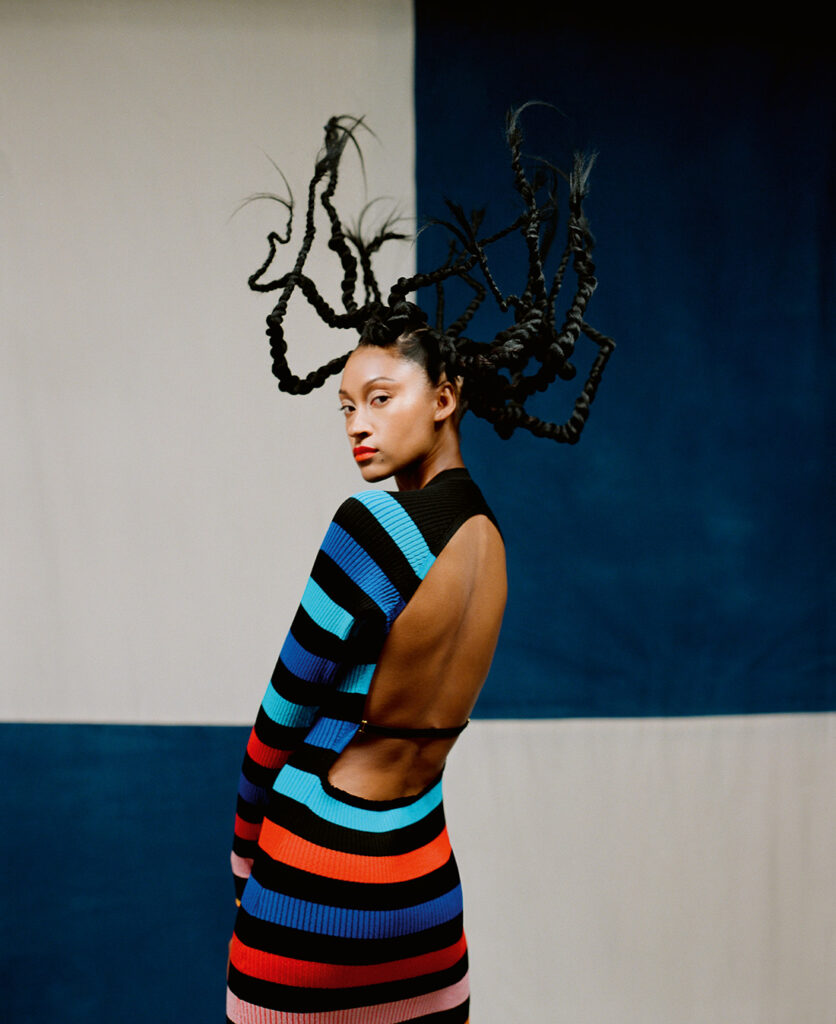 The Christopher John Rogers Spring-Summer 2021 collection – also known as ‘007’ – is arguably his most mood-boosting to-date, awash with punchy Crayola hues from sunshine yellow and pillar-box red to aqua and canary. “I love starting with colour because it’s intrinsically emotive, and it allows us to express something that can’t be put into words and doesn’t necessarily exist already.” Emotive it is: we challenge you to not feel bouts of euphoria when setting your sights on 007’s rainbow stripes and zig-zag prints. “The broad idea of essentialism manifested itself into a multitude of inspirational touchpoints and propositions, informed initially by the irreverent artworks of primary school children. The transformation of the sun’s immenseness and formidability, into a quarter-circle of yellow crayon in the corner of a kid’s colouring book page was the impetus,” he explains. In referencing the sun’s “immenseness and formidability” it might come as a surprise that the designer conceptualised the entire collection from his home in Bushwick, Brooklyn during some of New York’s darkest Covid-19 days. Having ordered art supplies online at the start of the pandemic, Rogers states that he simply wanted to have fun and feel like a child again. “I spent all of my time in my apartment. Taking time away from the hustle and bustle and just sitting still really reaffirmed a lot of the things that I found to be true for myself,” he shares. 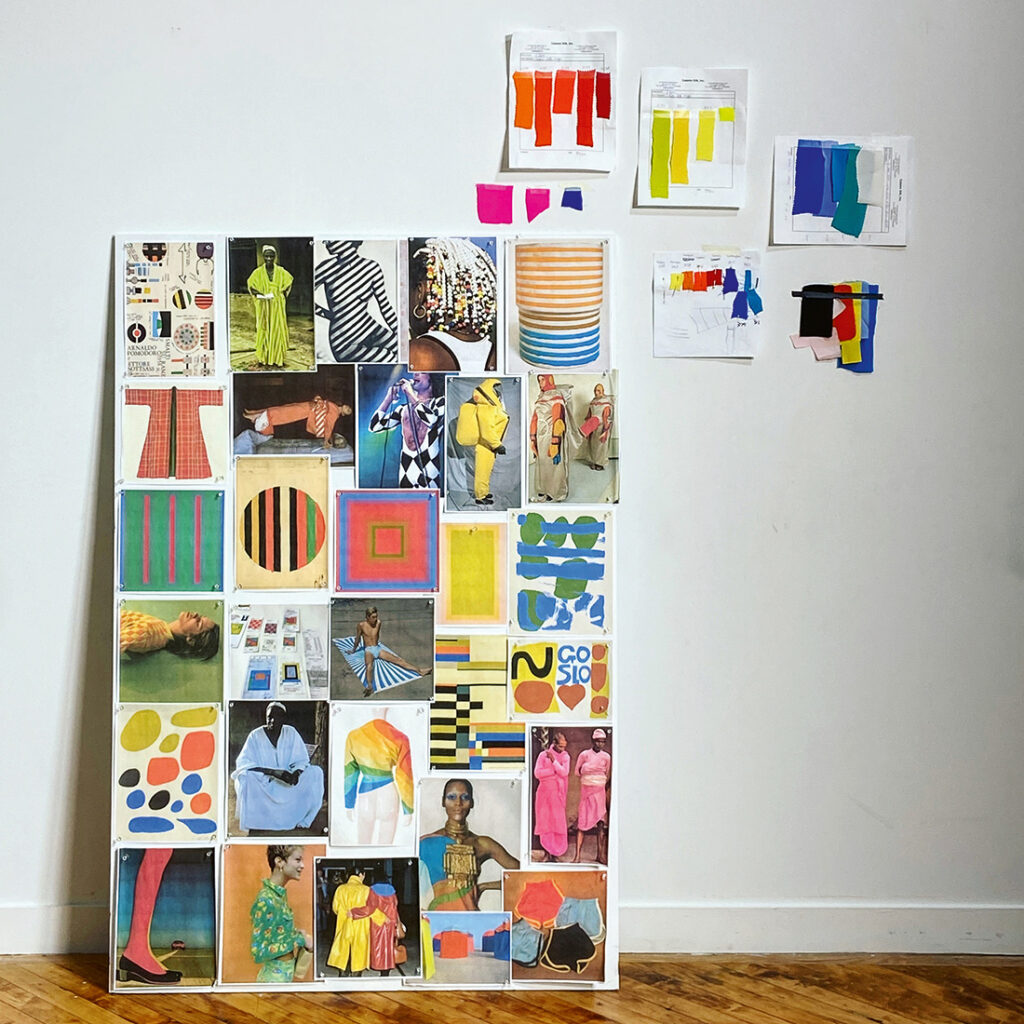 The SS21 collection is a smorgasbord of colour and joy, which developed from the designer’s desire to “have fun and feel like a child again”

Graphic black-and-white rugs, a saffron-coloured chair and artworks collected during Rogers’ time in NYC are a few of the interiors decorating the designer’s home/temporary studio, which, he says with a laugh, is “just as eclectic as the collection.” In look 21, for example, a ribbed candy-coloured confection of a dress feels like marker strokes, while look 5’s tiered, ruffled moment is rendered in cotton poplin printed with an abstract motif and feels like something a child would draw. “Just having fun with colour!” he states. It’s that joyful simplicity that anchors his entire portfolio of work. The Autumn-Winter 2020 collection (formally called ‘006’), consisted of sharp colour-blocked suiting boosted by oversized, padded shoulders and cigarette pants with side ruching, while Rogers’ signature draping technique was used to elevate would-be staple gowns into something quite magnificent. Delve even further into his archives and Pop Art prints across architectural white dresses, parachute-sized pyjama-style suits, and convivial canary-yellow cascading gowns all emerge. 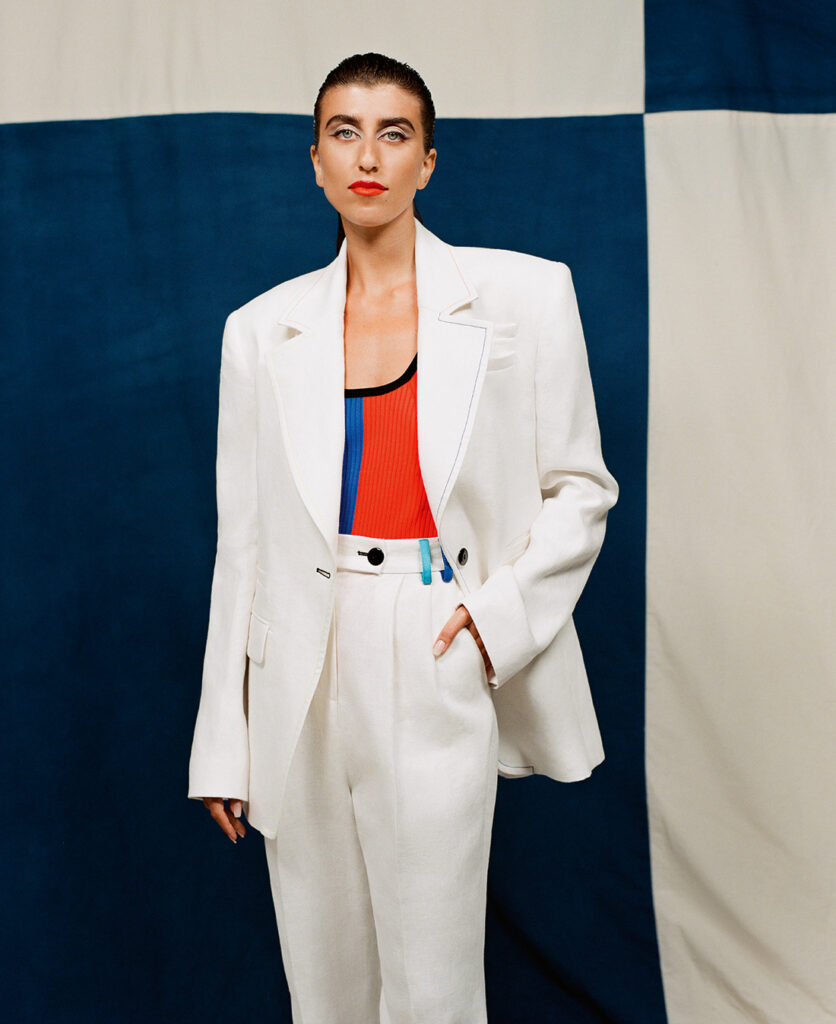 In recent years, some of the world’s most inspiring women, including Michelle Obama, Tracee Ellis Ross, Zendaya and Yara Shahidi have opted for this wearable art. “It’s always a great feeling when people feel like they can find themselves within the work,” the designer modestly adds. While many of SS21’s pieces confidently boast the label of ‘wearable art’, there’s also a visible shift towards stripped-back silhouettes. Staple white trousers are upgraded with simple dashes of rainbow hues across the waistline and lapels. Draping on gowns is left behind for AW20, and the SS21 dresses instead offer controlled volumes through overblown A-line cuts and dramatic peplums – all at once fantastical and functional. “I’ve always been a fan of styles that were more streamlined and straightforward, just as much as pieces that are more voluminous and dramatic… it’s just that now people have gravitated towards them, which I think is exciting,” suggests Rogers. 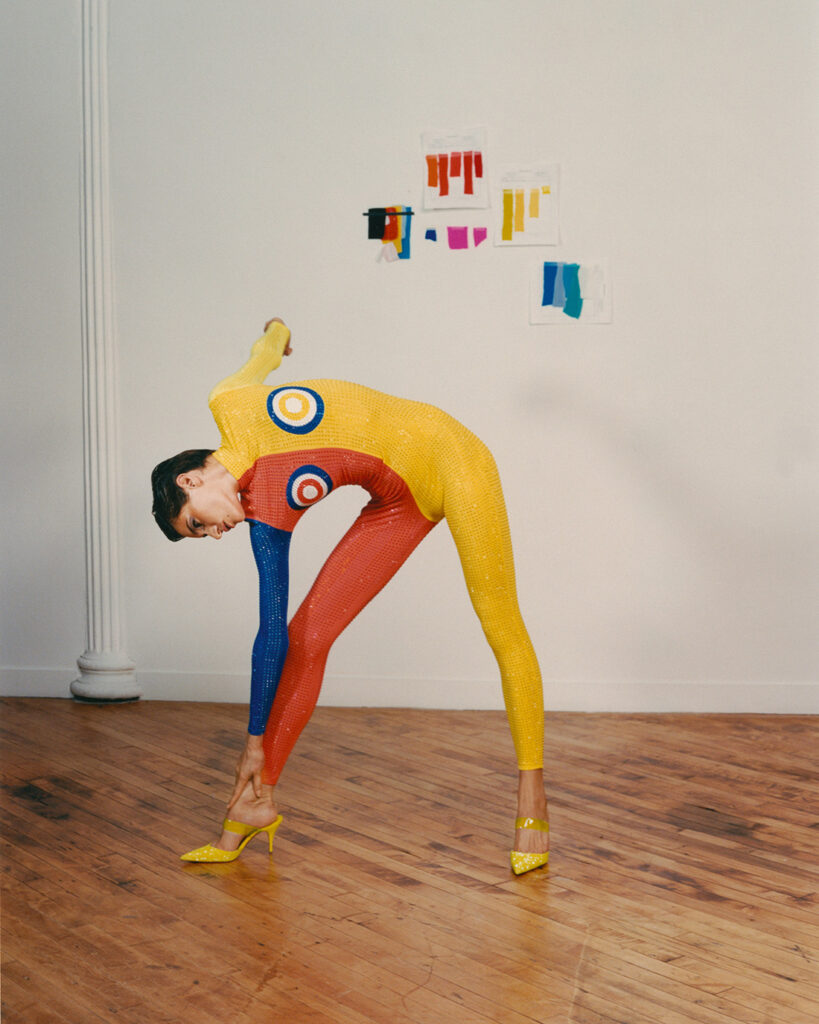 Key pieces that can traverse seasons include a bias-cut dusky blue shirt and trouser set accented with soft pleating and stripes; a cyan suit replete with military-style detailing; and a lengthy black shirt bursting with Crayola-coloured polka dots that is impactful whether teamed with tailored trousers or a clashing print. Rogers’ ability to tackle refinement just as impeccably as he does buoyancy was amplified earlier in the year when US Vice President Kamala Harris sported a Christopher John Rogers purple coat and dress at the 2021 presidential inauguration. “It was just a new extension of the type of person who can identify with the brand and the versatility of the clothes,” suggests the designer. “We make things for parties, for meetings or park-dates, for lounging at home, and for inaugural events.” We’ll gladly take a piece for each occasion. Explore Christopher John Rogers Spring-Summer 21 here.

Read Next: The SS21 Trend Guide You Need To Bookmark Now

From the Ashes We Will Flourish: The Beirut Designers Rising From The Rubble