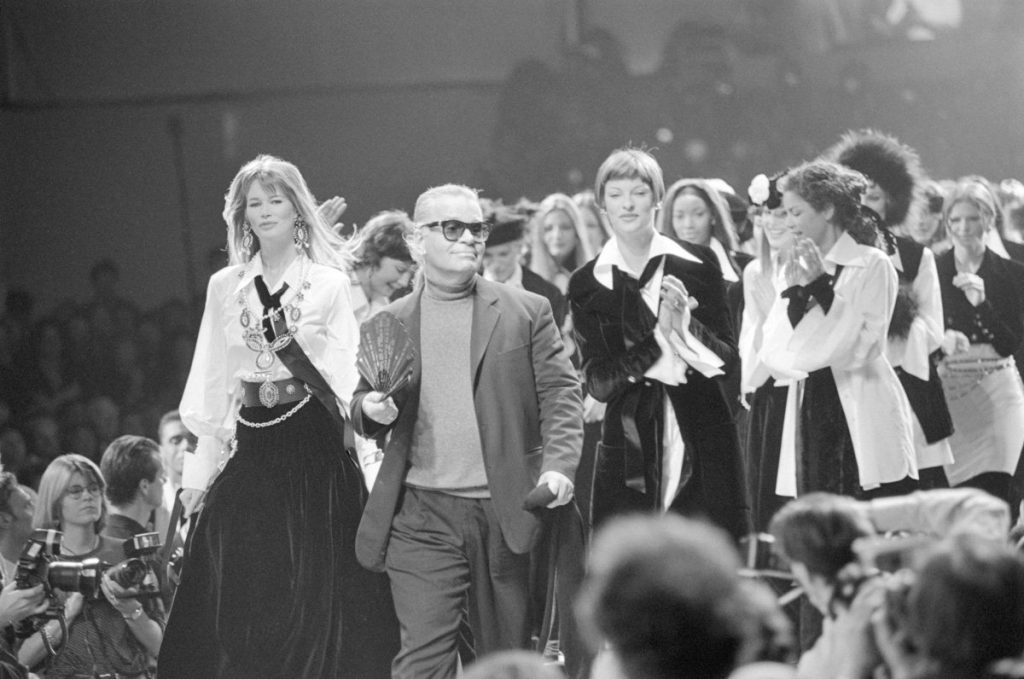 Karl Lagerfeld with the 90s Supers

The 90s was the era that invented the supermodel. These women were on a first name basis with the world, and were justified in not getting out of bed for less than $10,000.  This year marks the 25th anniversary of the supermodel and heralds their timely return – and not just to the catwalks. Working their age like a Chanel 2.55, they aren’t just any women, they are superwomen. MOJEH recaps the reign of the Supers and celebrates their intangible and powerful mystique.

‘There is not enough ego!’ Donatella Versace recently lamented, referring to the homogeneity of many of the current wave of models. ‘Now is a bad moment. Now we need something. We need a special personality.’ It’s not surprising that Donatella is one of the many designers to speak out against the anonymous, undernourished teenagers who have populated the runways in recent years, as (among the many other glories in her career) lady Versace was instrumental in the rise of the supermodel. Arguably, the ultimate supermodel moment was when Gianni Versace opened his March 1991 couture show in Milan with Linda Evangelista, Christy Turlington, Naomi Campbell, and Cindy Crawford marching down the runway, lip-synching the words to George Michael’s ‘Freedom’ while the music video of the song – in which they all starred – was projected behind them. It was an event that said something not only about the fashion industry, but also the preoccupations of the rest of the world. We were obsessed with these women.

Rising to fame in the early 80s, Naomi Campbell, Linda Evangelista, Christy Turlington, Claudia Schiffer, Cindy Crawford, and (later) Kate Moss came to be known as the ‘Big Six’: the official and universally accepted crew of super-duper models. It was never just their jaw-dropping looks that skyrocketed them to fame however they had, as Donatella professed ‘special personalities’. They had brains and business-savvy as impressive as their glossy hair and gym-honed physiques. Michael Kors once said of Crawford, ‘Cindy changed the perception of the ‘sexy American girl’ from classic blue eyed blonde to a more sultry brunette with brains, charm, and professionalism to spare.’ Soon, the Supers dominated the runways, the magazines, and the big ad campaigns to such a degree that they gained more control than the designers themselves. They were soon dictating the entire fashion industry, deciding which photographers, hairdressers, and makeup artists they would or would not work with. They made fashion history, shaping the landscape of fashion photography of the 90s.  It was Linda Evangelisata who gave Mario Testino his big break by choosing him to shoot her for a German Vogue cover. They simultaneously walked haute couture runways, and posed naked for Rolling Stone. They were beauty queens, icons, celebrities, entrepreneurs and rockstars all rolled into one big beautiful package.

Big being the operative word: these were not the rake-thin, stickle-backed models we see sloping down the runways today. In fact, all bar Naomi and Kate would have been considered plus sized models today with their US 6 (UK 10) measurements. Beacons of aerobics-sculpted silhouettes, these women had hips and breasts which appealed to a male audience as much as their female fans. The full-bodied supermodels became objects of male desire in a way that hanger-thin high-fashion models aren’t (Claudia posed for Playboy) while also embodying feminist ideals of strength, independence, and self-confidence. They formed a protective sisterhood: apparently when a certain designer refused to book Naomi because he didn’t use black models, the rest of the Supers refused to walk for him either. 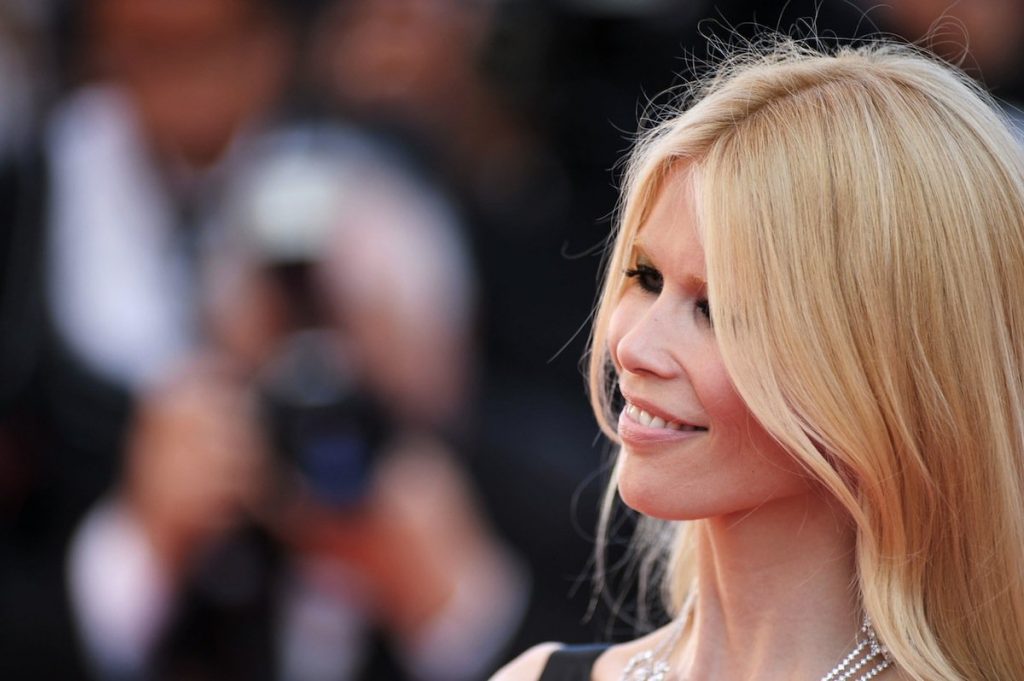 Yet, despite their seemingly unerring status, something had to give. The supermodel domination had been going strong for nearly a decade and foreboding clues came in 1993 when Valentino, Gianfranco Ferré, and Alberta Ferretti dropped Linda Evangelista from their new campaigns. Women’s Wear Daily declared that supermodels were on their way out. So, how do you take away a woman’s power? Remove her muscles, her hips and breasts, her hormones – and voila – you have a non-threatening vision of beauty and womanhood. The grunge moment of the early 90s reshaped the physical ideal of the decade and led to the ascent of a more androgynous archetype. The movement lauded Kate Moss and her innate ‘heroin chic’ aesthetic. Straddling both supermodel and waif, Moss became the poster girl for a change that still emanates today. The original Supers were ousted, considered inappropriate for the severe, minimalist aesthetic that dominated – glamazons just didn’t look good in Jil Sander suits.

But the winds of change have started again. In a backlash against the narcissistic and over-exposed ‘selfie generation’, the ‘untouchable’ Supers are reclaiming their places. 25 years after Christy Turlington became the face of Calvin Klein, the 44-year-old mother, model and philanthropist is teaming up with the fashion brand again to front their underwear campaign. Meanwhile, the original Guess Girl, Claudia Schiffer, was chosen to front the brand’s ‘30 Sexy Years’ anniversary campaign, which could even be considered better than her iconic ads from 1989. In 2012, Cindy Crawford returned to Shape magazine in a gold swimsuit to mark 20 years since her first cover with the magazine, looking every inch the power woman we admired over two decades ago.

Naomi Campbell – who paved the way for models of colour by appearing as the first black model of Vogue‘s famous September issue in 1989 – returned to star in the Roberto Cavalli spring/summer 2012 ad campaign. Linda Evangelista resumed her title with a big splash, appearing in the Chanel spring/summer 2012 campaign and editorials for Vogue Italia  and W magazine. And of course, the all-powerful Kate Moss recently became a contributing editor at British Vogue, a magazine she has featured on the cover of 33 times since her debut in 1993.

‘Supermodels like we once were don’t exist anymore,’ said Claudia Schiffer. And she’s right, but perhaps they will one day. The Supers return marks a seismic shift in what we expect from women in the fashion industry nowadays. Campaigns against underweight models like the Model Equity Code are screaming for us to cease venerating women for self-emaciation and to look at their talents outside of being a decent clotheshorse. There is a feminist undercurrent bubbling in the fashion industry today.  Just look at Prada’s spring/summer 2014 collection, laced with feminist allegories. ‘When I started, fashion was the worst place to be if you were a leftist feminist,’ Miuccia Prada said in a recent interview with the British Telegraph’s Stella magazine. ‘I always had a problem with it…I suppose I felt guilty not to be doing something more important, more political. So in a way I am trying to use the company for these other activities.’ The Supers comeback has a similar message –  as well as their recent fashion accolades, they are reminding the world that they have intelligence to match their beauty. Instead of using their social standing to generate a big following on social media to give themselves a voice, they’re using their prominence to voice the needs of others. In 2005, Chirsty Turlington directed No Woman, No Cry, a documentary exploring maternal health around the world and shortly thereafter, co-founded Every Mother Counts, a non-profit that aims to educate people on maternal mortality.

Social media prompted a fast track to fame, but certain modern models have confused this with the opportunity for self-promotion, documenting their wardrobes, the parties they go to and the green smoothies they drink. Linda Evangelista resolutely refuses to create a twitter account, but don’t mistake that for arrogance or passivity. In his obituary John Casablancas, the founder of Elite Model Management, was quoted as saying Linda was the only model who ever thanked him for helping her become such a big success. They are gratuitous and know that with great fame comes great responsibility. Yes, they appear ‘untouchable’ and perhaps the fashion industry needs iconic women to maintain their allure, thereby ensuring that when they do speak out, the world puts down their smart phones and listens.

Do the supers personify modern feminism? Well, if their return comes with the encouragement to know and use our own minds, becoming fashion editors, film directors, businesswomen and philanthropists then here’s to female Freedom.

Queen Elizabeth II Has Passed Away