“To just pack your bags and go to NYC is a really big thing for a young, single Arab woman.” In a case of art imitating life, roles that resonate with stereotype-smashing Arab women have become a calling card for Egyptian-American actress Amina Khalil

Sitting with Amina Khalil in the relaxed environs of El Gouna on Egypt’s Red Sea coast, she recalls, “I’ve always wanted to be an actress since I was a little girl. I must have been three- or four-years-old when I knew. Watching Disney movies gave me my ‘a-ha’ moment. It wasn’t about being a princess that possessed me, it was about the stories. I would watch films and then reenact the characters with my friends and say, ‘I’m going to be Ariel and you be Flounder.’ I’ve always been an entertainer.” So when she set her sights on an acting career it came as no surprise to those who know her best.

Born in Chicago, Khalil earned her bachelor’s degree at the American University of Cairo in Egypt, and went on to train at the Lee Strasberg Theatre and Film Institute in New York City. From there she received training at the Moscow Art Theatre in Russia. She admits that her journey is not typical for a single, young Arab woman. Khalil waitressed to keep the lights on in NYC and it’s something she’s proud of, learning the value of working hard to live. She credits her family with being open to giving her the freedom to have such experiences. “I was so far from home and that’s not something that we Arab women are used to. We are very cocooned and if we leave and decide to go to a different city, it’s usually with family. To just pack your bags and go to NYC is a really big thing.” As is often the way, it wasn’t what happened within the walls of academia that had the greatest impact on Khalil’s outlook. “I was fresh out of university and eager to learn. As much as I benefitted from Strasberg, the experience of being an Arab woman away from home and learning to hustle on the streets of NYC was the most important lesson.”

Khalil’s 2016 Ramadan series Grand Hotel (renamed Secret Of The Nile for Netflix) proved to be her breakthrough moment. For her fans, the appeal of Khalil’s characters and their stories is that they are relatable. “In Grand Hotel, I played a woman named Nazly, and she’s definitely someone that left a mark in my heart and on my career,” she shares. “Often when people see me walking on the street they call me Nazly. I love that. If fans see her in me it means I did a good job bringing her to life.” Some of Khalil’s other roles bring attention to the culture of the region and the women challenging their positions society. In Leh La’a?! (Why Not?!), the 2020 series directed by Mariam Ab, Khalil plays a 30-year-old woman who wants to gain independence from her family by moving out and getting a job, despite the fact that it had been planned that she would marry, in what amounted to a coerced union. “This was a groundbreaking experience,” she notes, “because I had a lot of women come up to me and say ‘We know exactly what you are feeling. We felt exactly the same way your character was feeling; the conversations that the character was having with her mother – we’ve had those conversations.’ It really resonated with Middle Eastern and Egyptian women.” 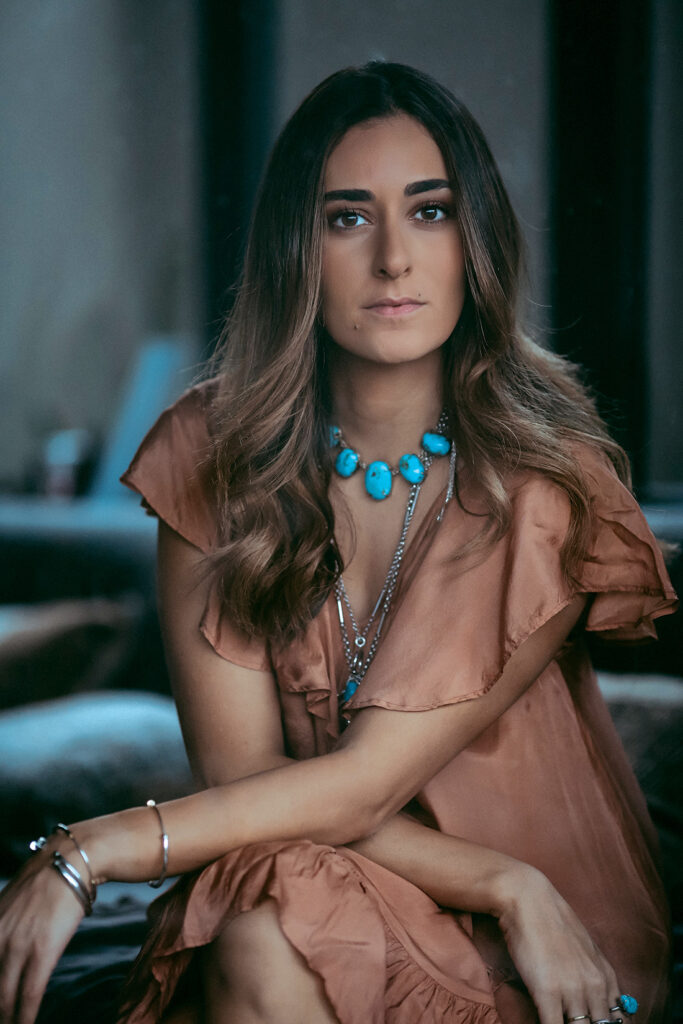 “It has to be cool, very bohemian, a touch of chic, comfortable and a bit out of the box,” Amina says of her day-to-day style

Her success, however, has come only now that she’s paid her dues. “I got rejected many times when I was auditioning, even for grad school in the States to get a master’s in acting or directing. There were many semi-professional roles before I took on acting professionally. Even then, I got rejected for various reasons that can be very hurtful.” But perseverance was her response. “This industry, especially for women, and Arab women in particular, can be challenging because we’re breaking boundaries. You need to really believe in yourself and surround yourself with a network of positive people who are going to support you rather than bash you or be unsupportive in the times when you really need them.”

Just as things were falling into place, Khalil’s life was put on pause by a bout with coronavirus. “I had my 14 days in quarantine and tested positive for the virus because I fell ill. There are so many precautions that have to be taken and I urge Egyptians to understand it’s not something you can outsmart. I have to admit that I’d not been taking the virus completely seriously until I got it. I knew it was there – I’ve lost friends because of it – but sometimes you get relaxed.” Restored to health, Khalil was eager to jump back into work on a comedy film that will also feature four well-known male actors. She’s also been shooting a period piece in Morocco, and filming for the 30-episode run of her Ramadan shows began last month. So, does the 32-year-old nurture any Hollywood aspirations? “I always say I don’t really know the answer to that question. For me to act in a film, I need to truly fall in love with the story, so if Hollywood is going to present to me a story I will fall in love with, I will take it in a heartbeat. If it’s London, India, wherever… I don’t think in terms of continent, I think in terms of content.”

Turning to fashion, Khalil describes her personal style as “A pepperoni pizza. It has to be cool, very bohemian, a touch of chic, comfortable and a bit out of the box.” Recently the butterfly creations of shoe designers Amina Muaddi and Sophia Webster have caught her eye, but during film festival season, Khalil is keen to support regional designers by showcasing their couture designs on the red carpet. She, like her Arab sisters, has a boldness in how she wears fashion and carries herself. I ask her if she can unpack the origins of such enviable self-possession. “The Arab world is very strict on gender roles and it comes very much from the fact that a man is a man and a woman is a woman. A part of being a woman is taking care of yourself and doing what is expected to be feminine, graceful and beautiful; to be good housewives and good mothers. There are very few stay-at-home dads in Egypt,” she says. “There are a lot of women that I know that are breaking these lines and who are saying ‘No, I’m not going to do this; stop trying to stereotype me about what I should do to be feminine.’ So an Arab woman does have an allure that is very unique.”

When she can, Khalil fills gaps in her shooting schedule with charity work. “My heart sank a few years ago when I heard about the female genital mutilation rate in Egypt. I felt I needed to do something about it. The statistics are decreasing incredibly because of the work of UNFPA [United Nations Population Fund]. I applaud them all for their efforts.” She also helps her mom, an animal activist, by saving Egyptian baladi (street) dogs and cats that have been abused, hurt or abandoned. “I do my best to help when I can, saving them from the street, fostering them, working with them in the kennels for their therapy, or taking them to the airport. I try to cover expenses for some of the dogs,” she tells us. Even at this stage of her career, it’s not awards or fame that move Amina Khalil; it’s the small things. “Sometimes the smallest, most humbling moments are the ones that truly matter. Getting an Instagram message from a little girl telling me ‘You changed my life because you inspired me, you gave me power, I look up to you’ – things like that really keep me going, knowing I’ve affected someone’s life.”