Couture Fashion Week returned to Paris (or in Pierpaolo Piccioli’s case, Rome) for the Autumn/Winter 2022 season. From Valentino sashaying down the Spanish Steps to Olivier Rousteing’s debut collection for Jean Paul Gaultier, here are some of our haute couture highlights.

Valentino Shut Down The Spanish Steps 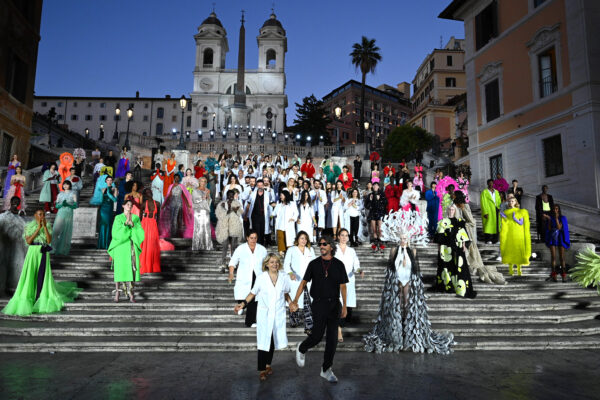 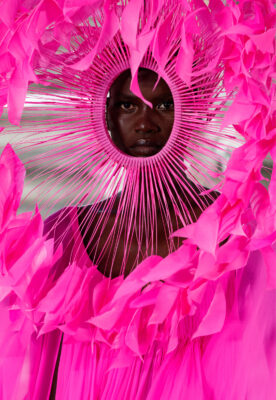 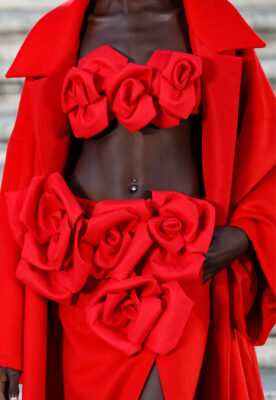 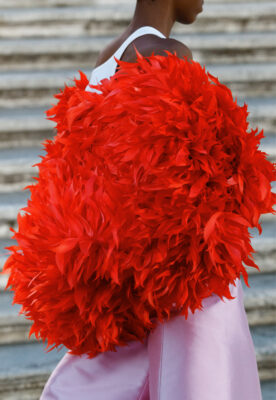 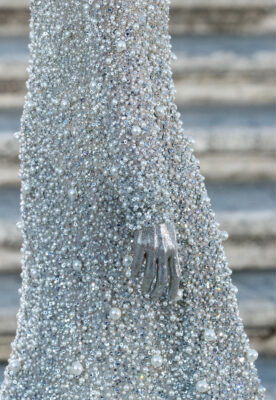 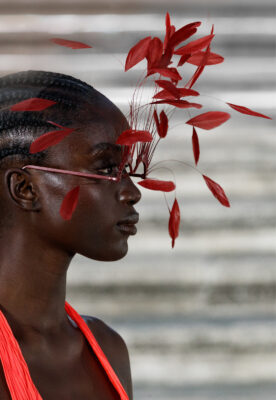 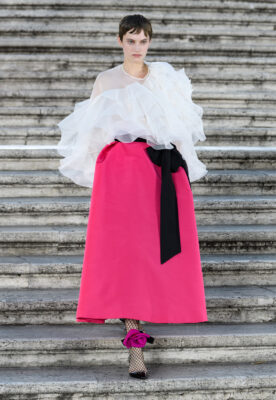 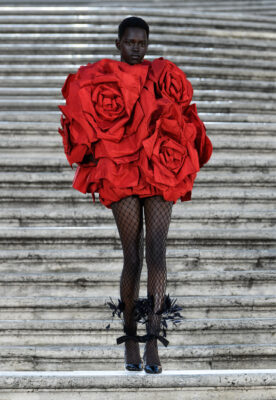 Pierpaolo Piccioli took spectators to Rome for Valentino Autumn/Winter 2022 Haute Couture. Staged at the Spanish Steps and ending at Valentino’s headquarters at Palazzo Mignanelli, 102 models strutted in flamboyant, colour-splashed creations. The collection is called “The Beginning” in honour of the full-circle moment of presenting where Valentino began. The pieces echoed a lightness, though heavy with significance, and showcased Valentino’s signature theatrics. Think: gigantic, Valentino-red roses; feathers from all angles; elaborate headpieces; and sumptuous textures. Makeup artist Pat McGrath stuck to a skin-first finish with minimal makeup save for silver-painted models and tattoos splashed across arms, chests and faces. For the final bow, Valentino’s seamstresses joined Piccioli as the summer sun set behind the steps. Rewatch the show

Dior Joined Forces With A Ukrainian Artist For Autumn/Winter

Inspired by the Tree of Life, a cross-cultural symbol of connection, creation, balance and harmony, the Dior Haute Couture Autumn/winter 2022 collection epitomises its inspiration through a tranquil, natural palette and billowing silhouettes. Working alongside Ukrainian artist Olesia Trofymenko, Chiuri interprets art and craft through couture, utilising the House’s emblematic embroideries across wool crepe, silk, cashmere and cotton in combination with Monsieur Dior’s signature touches of gold. Rewatch the show

Stars Stormed The Catwalk At Balenciaga

Nicole Kidman, Dua Lipa, Christine Quinn, Kim Kardashian. If seated together at a dinner table, one could argue that these celebrities would have little in common. That is, until now. They were all on the roster for Balenciaga’s Haute Couture Autumn/Winter 2022 show and sashayed down the runway alongside supermodels Naomi Campbell and Bella Hadid. Unlike the majority of Balenciaga’s models, the cultural sensations went without face shields, seemingly to take advantage of their stardom and catapult the show to viral status. Creative director Demna Gvasalia gathered his muses to celebrate his second couture collection for the House, which put a modern spin on classic silhouettes. Case in point? Bella Hadid’s satin, strapless gown that had been reinvented to include a high-low hem. Rewatch the show

Dolce & Gabbana went all-out for its 10th anniversary Alta Moda presentation, showcasing 106 looks designed as an homage to Sicily (which also served as the location of the show). The influence of faith – namely the all-black wardrobes of Sicilian widows – was apparent from black-veiled heads to embellished toes while heavy embroidery was interspersed with gold, lace and baroque accents. Not known to do anything by halves, the designers created wearable works of art where cherubs perched on padded shoulders, gilded jackets were adorned with roses, and 12-foot trains received standing ovations. As expected, celebrities flocked to Italy to be on the FROW, gifting us a glorious group shot of Mariah Carey, Dame Helen Mirren, Sharon Stone and Drew Barrymore.  Rewatch the show

Iris Van Herpen integrated the metaverse into its Haute Couture presentation by collaborating with Microsoft on a multi-reality experience. Not only were physical models showcasing the Meta Morphism collection, but digital avatars were wearing them, too – they were projected through HoloLens headsets and augmented reality. Utilising technology is nothing new for Iris Van Herpen, as the Dutch designer began experimenting with 3D-printed pieces 13 years ago and digitally designs garments before bringing them to (real) life. The Autumn 2022 collection featured plenty of 3D-printed details – from pearls and cut-outs to panels and sustainable materials – and evokes images of Greek goddesses, mirroring the sculpture of Daphne, a mythological nymph, that took pride of place in the centre of the runway. Rewatch the show

For his highly anticipated guest collection at Jean Paul Gaultier, Olivier Rousteing stuck to the freeing silhouettes for which the Maison is renowned, adding his flare to archival pieces. With a runway chock-full of models of all races, sizes and ages, the collection is simultaneously a celebration of the body and House codes. Sculptural pieces featured baby bumps and breastplates, an homage to Gaultier’s tongue-in-cheek 1992 piece for Madonna and signature fragrance bottles, and the tribute continued with pieces inspired by the ateliers and seamstresses: dresses were crafted with tape measures; a bodice replicated a pin cushion; gloves featured thimbles. Elsewhere the Maison’s signature stripes are integrated into menswear offerings while sculptural styles included tuxedo dresses, corsetry and sky-high shoulders. To share the one-off collection with the world (and hundreds of fans waiting outside), footage of the show was projected onto the building and the runway ended on a balcony where models debuted their ensemble to the world below. Rewatch the show

These Balenciaga Sneakers Are Dividing The Internet