Whether a lover of art, history, fashion, spirituality, anthropology, pizza and pasta, or you’re just the average pleasure-seeker, the ancient Italian city of Rome will captivate your heart with its zest for life. A living, thriving museum, the city is steeped in history with famous monuments at every turn accompanied by legendary tales. The must-see list is as long as the Tiber river that runs through the heart of the city, and so your first trip to Rome will be preparation for the next. 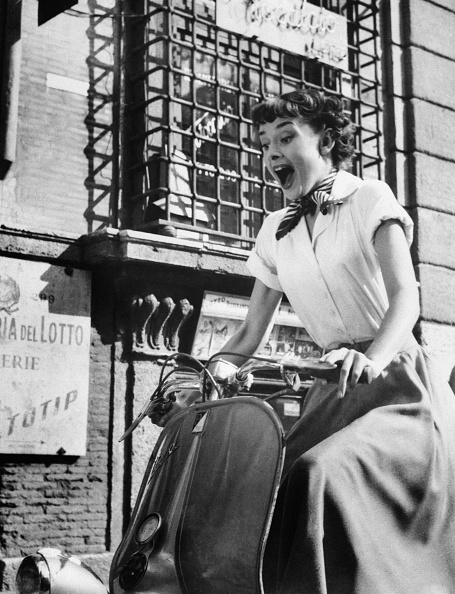 The scene for countless Hollywood movies, take your lead from the glamorous heydays of La Dolce Vita. Eat the best pizza of your life in the piazza opposite the 2,000 year-old Pantheon, recreate Audrey Hepburn’s Princess Anne in Roman Holiday by exploring the cobbled streets on the back of a Vespa, and throw a coin into the Niccolò Salvi’s breathtaking Trevi Fountain, dated 1732 – the backdrop for the iconic scene in Federico Fellini’s La Dolce Vita. Rome is about romance, food, art and life, lots and lots of life. But with all this to do, travellers can be forgiven for wanting a little downtime.

There are no shortage of high-end hotels in Rome, but what most of them don’t have is the luxury of space. Resting atop the hill of Monte Mario overlooking the rooftops and the Vatican City, amid a 15-acre private park, is the sophisticated Rome Cavalieri, a five-star Waldorf Astoria hotel, just five kilometres, or 20 minutes, outside of the city centre but worlds away in terms of calm. For travellers looking for as much rest and relaxation as culture and adventure, the Cavalieri is a haven from the busy streets and tourist traps of central Rome. But its out of town location is not a hindrance – taxis wait readily at the gates, and the hotel offers an hourly shuttle back and forth from the city centre. 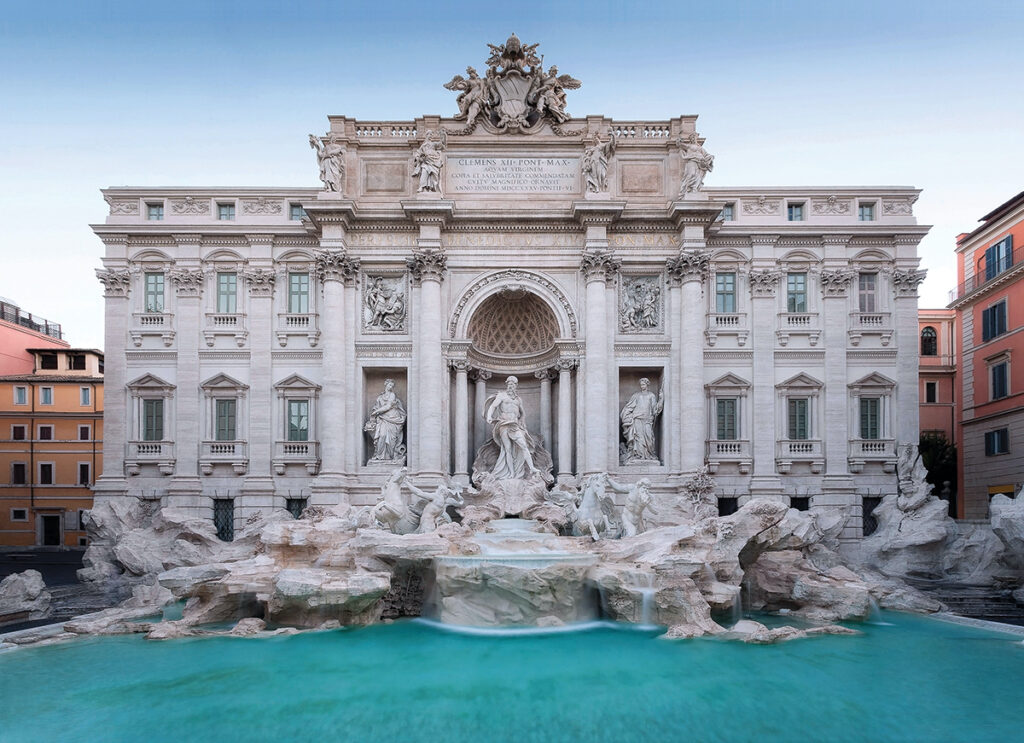 Founded in 1963, the architecture is charmingly retro. Designed by superstar architect of the time, Ugo Luccichenti, its severe concrete facade is deceptive in contrast to the treasure trove it conceals. Walk through its rotating doors and arrive in another era. A melange of artworks by Old Masters, rare Tiepolo paintings and antiques line the walls, at odds with the vintage ’60s globe lighting, silver tiled ceiling and sweeping staircases that hark back to the glamorous period when movie stars and film execs frequented the city, then dubbed “Hollywood of the Tiber.”

The view is the hotel’s piéce de resistance, breathtaking and uninterrupted thanks to its hilltop location. Every major landmark, give or take, can be seen and St Peter’s Basilica is so close you feel you could touch it. The 345 rooms and 25 suites all have private terraces, from which a spectacular sunrise over the city can be admired. Having played host to everyone from royalty to the likes of Brad Pitt, the suites range between 80 to 450sqm, each with a unique interior design and one-of-a-kind art and antiques decorating the walls. 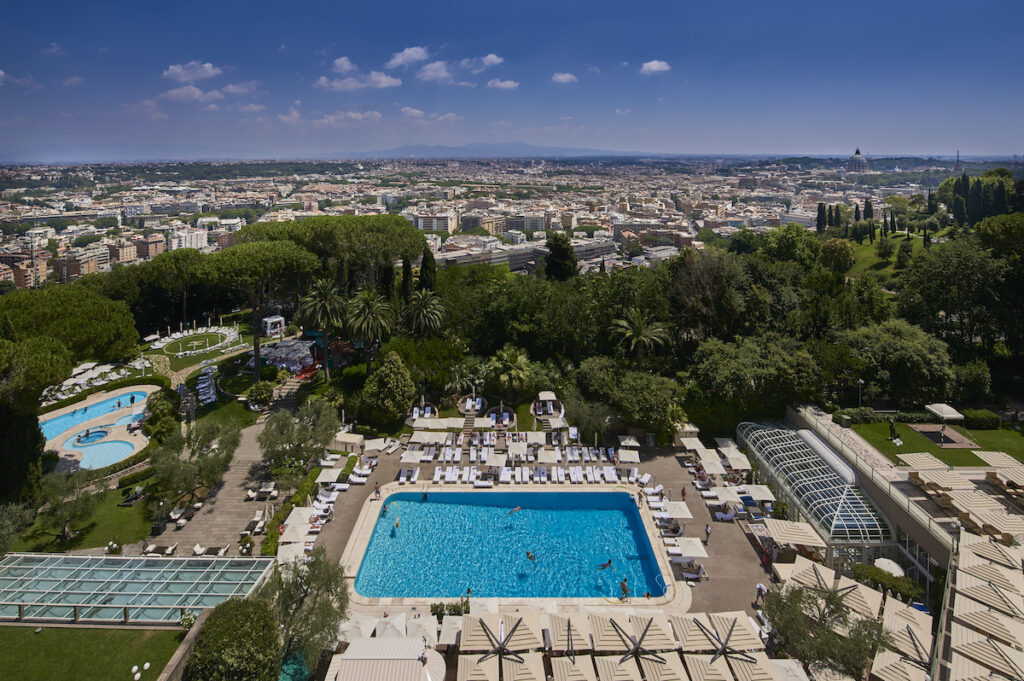 The hilltop view from the Rome Cavalieri

The highlights being the Napoleon Suite, which showcases the very desk the commander was said to use, which Francophiles and history buffs will adore. The 133sqm Planetarium suite has Robert Indiana pop art adorning the walls and a jacuzzi in its roof garden, while Leonardo Dicaprio made the Penthouse suite his home for months during the filming of Martin Scorsese’s Gangs of New York.

People watching at the Cavalieri is world class: pretty girls and their sugar daddies ramp up the glam-factor, and at night the hotel sees couples romancing in the bars and restaurants, with evening entertainment provided by a small band by the pool to accompany dinner under the stars. The main swimming pool with its rows of loungers and parasols wouldn’t look out of place in a James Bond movie. 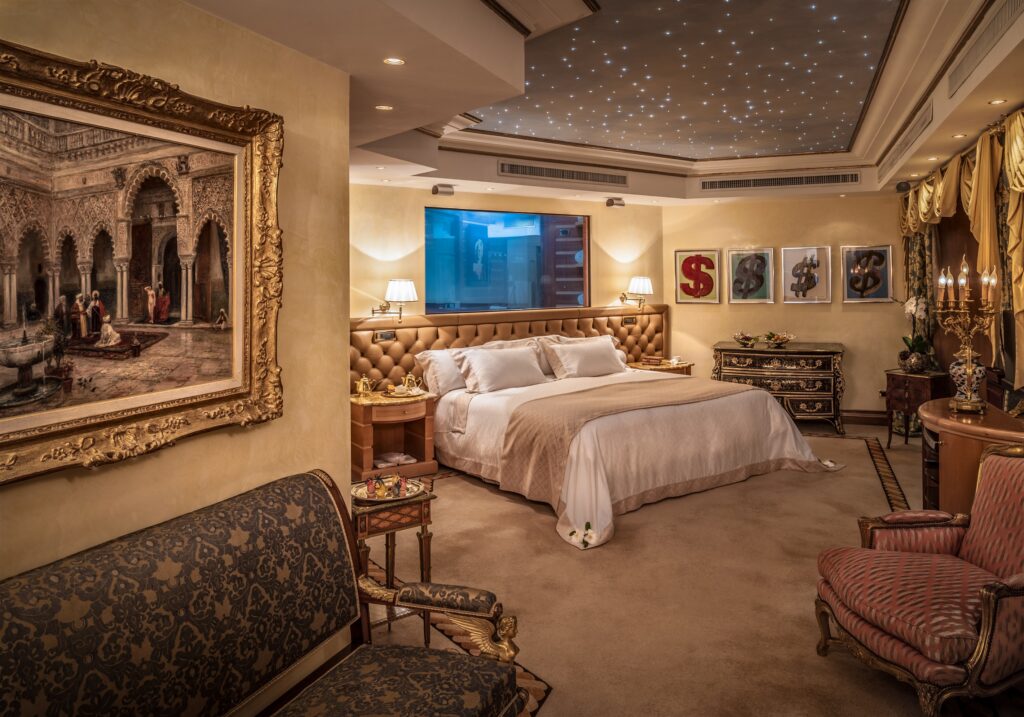 Perfectly coiffed boys in white shorts and polo shirts run around delivering cocktails and snacks to hotel guests poolside, in addition to a number of deeply-tanned club members, who are obviously frequent guests during the summer.

The hotel’s art collection is its pride and joy, and is said to be one of the largest private collections in Europe. Weaving throughout the public areas, and through the suites, the timeline of works displayed spans between the 16th century up until the 1980s, by artists such as Giuseppe Zais, Alessandro Magnasco and Andy Warhol. A remarkable collection of antique French furniture from Louis XV and the First Empire can be viewed in public areas, as well as theatre costumes worn in the 16th century. 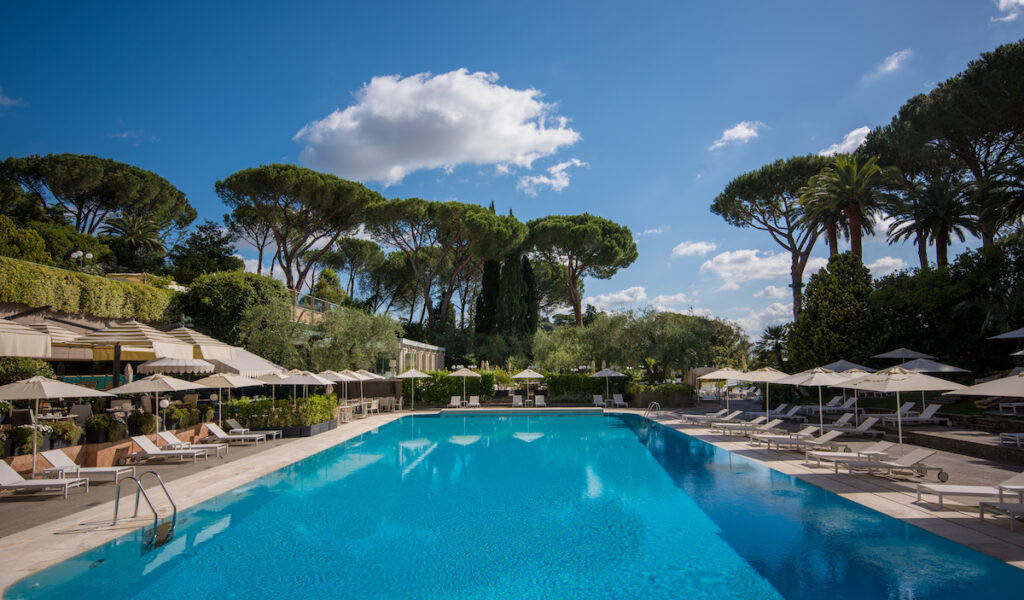 Dip into the pool after a busy day of sightseeing

The food is, unsurprisingly, always on-point – it is Italy after all. Expect a lot of traditional pasta dishes – the carbonara at Uliveto, overlooking the swimming pool, is to die for and return visits to this in-house destination to try new dishes won’t disappoint. The staff will happily guide you through the menu, and in true Italian style, urge you to try more.

The gastronomic jewel in the crown, however, is the rooftop dining destination La Pergola from award- winning Chef Heinz Beck. The only three-star Michelin restaurant in Rome, it is also widely rumoured to be the number one in Italy. With a fabulous panoramic view of Rome at night, La Pergola marks one of the most romantic places to dine in the city, therefore booking in advance is essential. 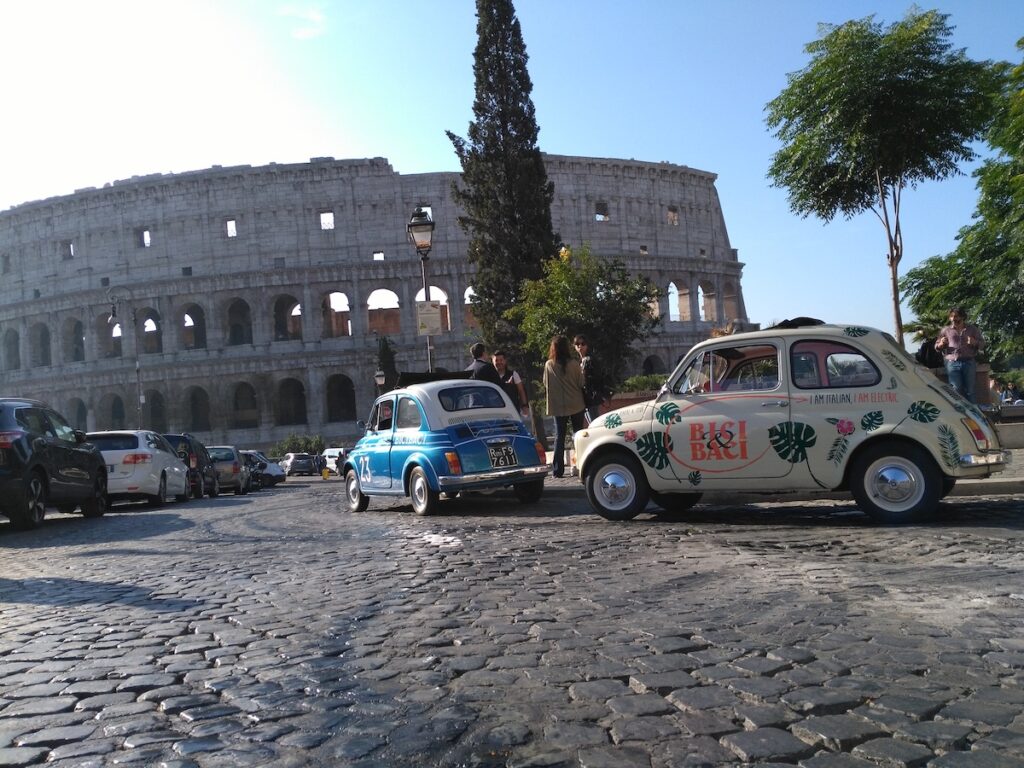 Take a trip around Rome in a vintage car

At the Cavalieri they take the ancient Roman tradition of bathing seriously. Guests of the suites and Imperial floor have full use of the 2,500sqm spa, which offers Turkish bath, jacuzzi, Japanese stone walk and hydromassage pool with treatments by La Prairie and Aromatherapy Associates. Nothing beats a sauna and steam after a long day sightseeing, topped off with a luxurious La Prairie full body treatment. For those who take their fitness seriously, the gym is brilliantly kitted out with state-of-the-art everything by Technogym to prevent those extra carbs making any serious impact.

When you decide to venture out and return to the streets, be sure to consult the hotel’s concierge who are on hand 24/7 to guide you towards the best places to eat outside of the hotel, and the number one things to see, or even to arrange a private tour of the Vatican City should you really want to avoid the crowds. Like Rome, one stay at the Cavalieri will see you returning time and time again. 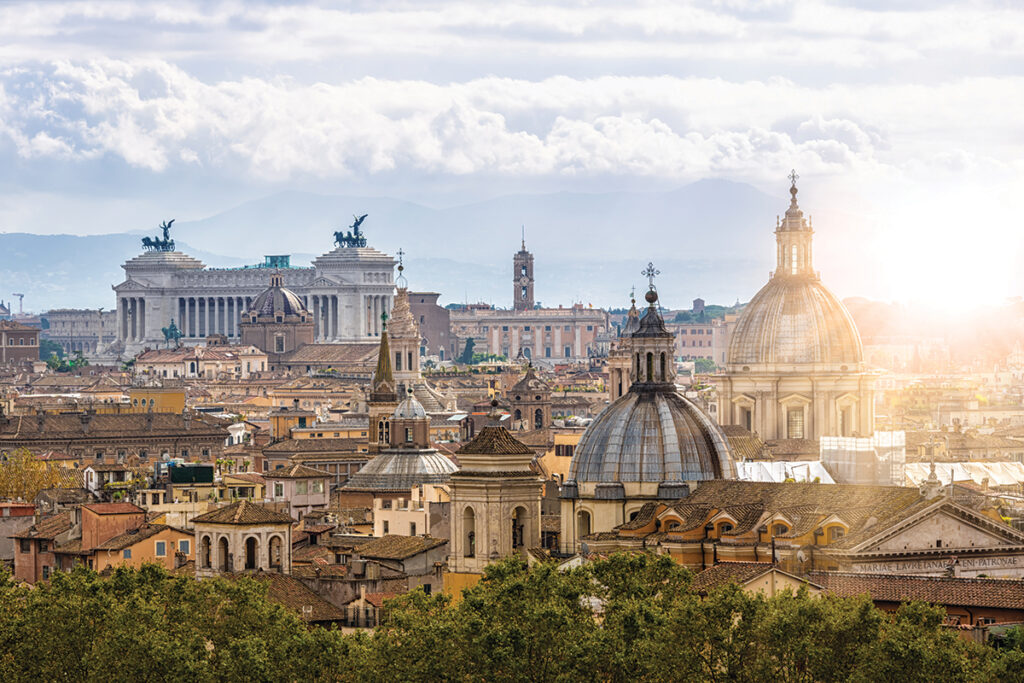 The historic rooftops of Rome

This Valentine’s Day, put the Rome in romance with a luxury stay at Rome Cavalieri, A Waldorf Astoria Hotel. To celebrate  February 14, the hotel is offering an indulgent pampering package for two; which includes a ‘Chocolove’ massage, a sensory tasting experience led by the executive pastry chef and a romantic horseback ride around the city’s historic sites, finishing at the spectacular Giulio II Castle. Dhs2000 per couple, excluding accommodation, or book a suite for three-nights or more and receive a complimentary ‘Love Experience’ of your choice; Romecavalieri.com