The fashion industry lost a great icon last year. As an exhibition of Oscar De La Renta’s most striking fashion moments opens at SCAD Museum of Art ahead of the label’s Autumn/Winter 2015 show this week, we reflect on the legacy of a legend. 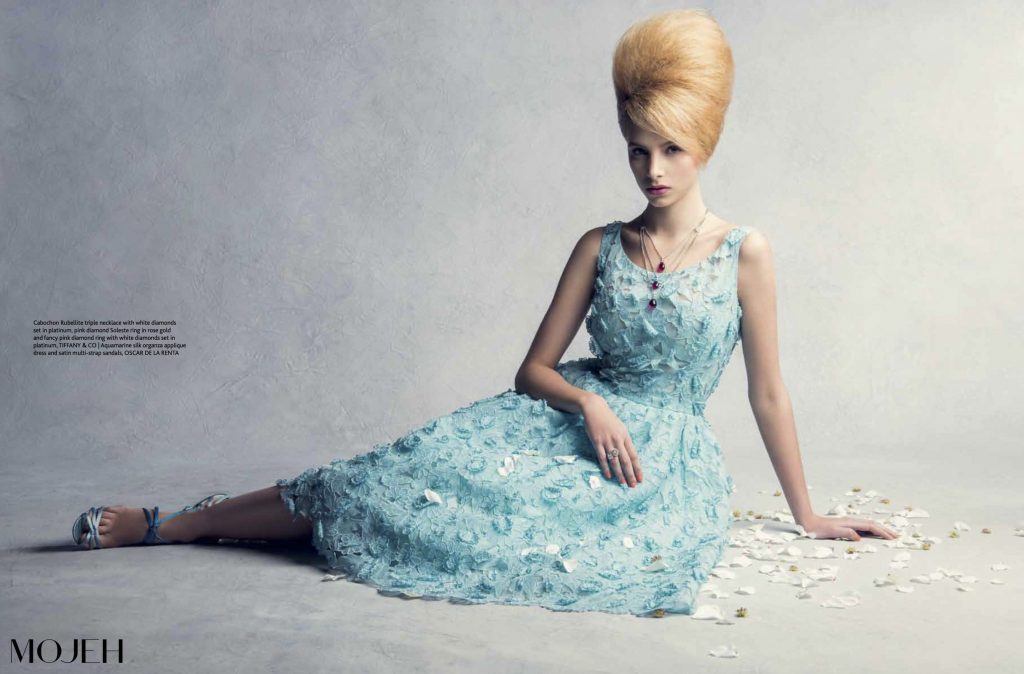 The Oscar De La Renta woman epitomises a certain kind of grace and elegance that never goes out of style. The South American designer came from a generation of creatives who were unafraid of embracing femininity and true craftsmanship in every single piece. We know Oscar loved women, he always said so, and it’s there in each gown, jacket and shoe he designed and in each image in which he stands smiling next to a woman whose fashion dreams have just come true. ‘I come from a place where a sense of life and colour is very important,’ he told MOJEH Magazine in 2012. ‘I like things to be beautiful and exceptional, full of colour and vibrant. I try to design clothes that make a woman feel bold,’ he continued. ‘I always say that elegance is a discipline of life.’ A mantra that he certainly carried with him throughout his life and which is evident in each and every collection.

In celebration of this legacy, an exhibition opened at the Savannah College of Art and Design Museum of Art in Georgia this month, curated by Oscar’s great friend André Leon Talley and bringing together fifty of the designer’s most memorable creations. Set up in carefully edited vignettes, key pieces include the black and white gown worn by Sarah Jessica Parker to the Costume Institute Gala in 2014 and famously embroidered with Oscar’s signature (a touch she implored the modest designer to add), custom designs worn by the likes of Nicole Kidman, Kirsten Dunst and Taylor Swift, and memorable Oscar moments from first ladies Hillary Clinton and Laura Bush. But it wasn’t only the famous and powerful that Oscar dressed. His everyday clients were vast in number and ever loyal, particularly his brides. The exhibition includes many pieces by anonymous donors, with a poignant personal touch added by the inclusion of items designed for Oscar’s beloved wife, Annette. 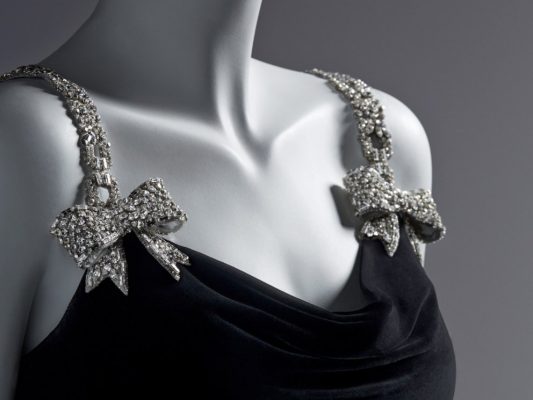 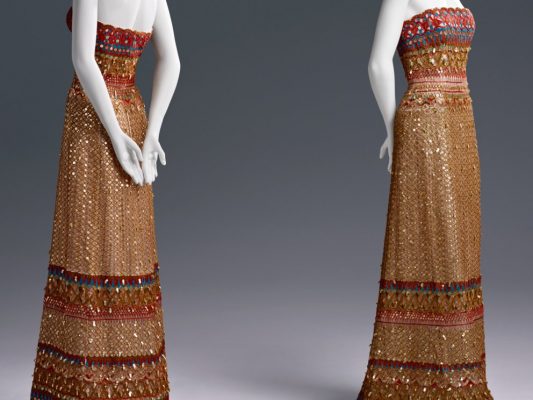 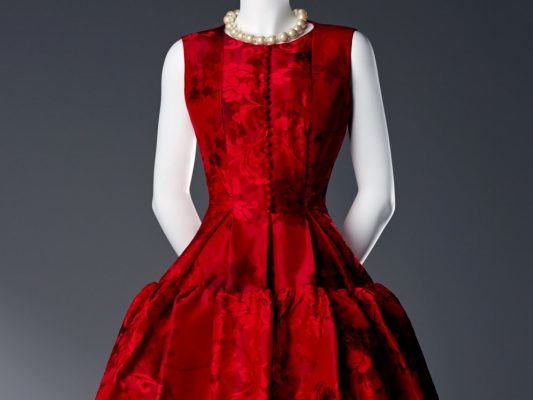 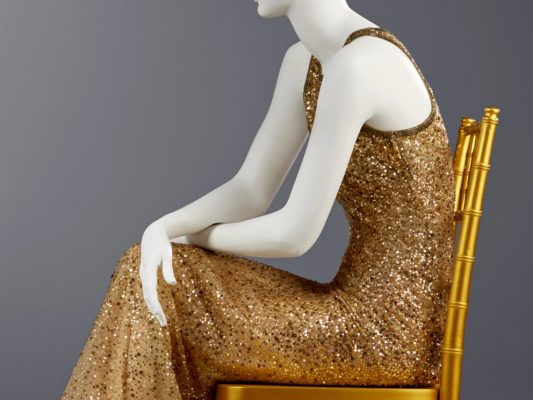 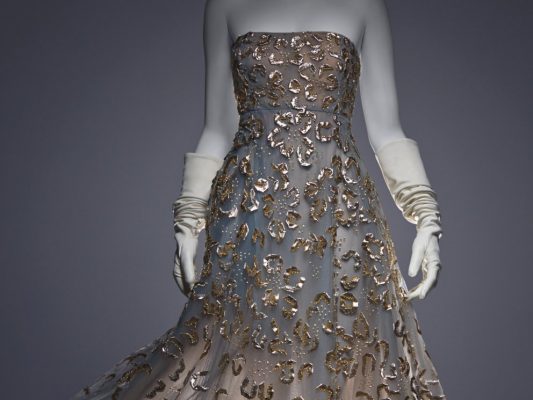 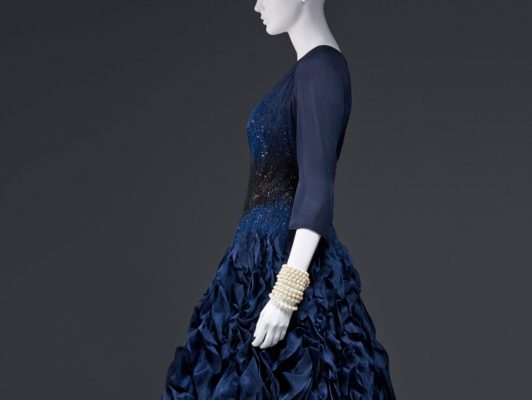 Oscar De La Renta: His Legendary World of Style is on at SCAD Museum of Art until 3 May 2015

As we reflect on Oscar’s immense body of work (the exhibition is far from a retrospective) we look back on the times that the designer’s magical touch alighted on MOJEH magazine. His clothes have brought their unique quality to numerous MOJEH editorials in recent years and we’d like to share those moments with you. From A Marriage of Legacy by Riccardo Vimercati, when we took to the rooftops for a slice of downtown edge, to the youthful romanticism of The New Bloom by Joseph Paradiso, we will always remember Oscar.

Hailed from the Dominican Republic, De la Renta began his career at 18, enrolling at the Academy of San Fernando in Madrid studying fine art whilst sketching dresses in his spare time. His first foray in fashion saw Beatrice Cabot Lodge, the debutante daughter of the U.S. ambassador of Spain, photographed on the cover of Life magazine in 1956 wearing one of his designs. Ignited by the speed of the fashion press De la Renta was soon recruited as a discipline of Cristóbal Balenciaga, progressing as couture assistant at the house of Lanvin under Antonio Castillo in Paris.

Championed by Diana Vreeland, editor of Harper’s Bazaar, De la Renta was persuaded to move to New York in 1963 with promise of a bigger future working under Elizabeth Arden. Two years later De la Renta transitioned to Jane Derby, launching his own eponymous label after her death in 1965. It was during the 60s where De la Renta found hit footing. His designs were beloved for their glamorous aesthetic and understanding of cocktail culture, favoured by Jackie Onassis, wife of then President John F. Kennedy.

Harking back to our exclusive interview with De la Renta in issue 6 of MOJEH, he commented on the importance of his customer. ‘Women have evolved in unbelievable ways since I started designing clothes. As a designer I try to understand that woman, understand her aspirations and her dreams. I always say that elegance is a discipline of life.’ 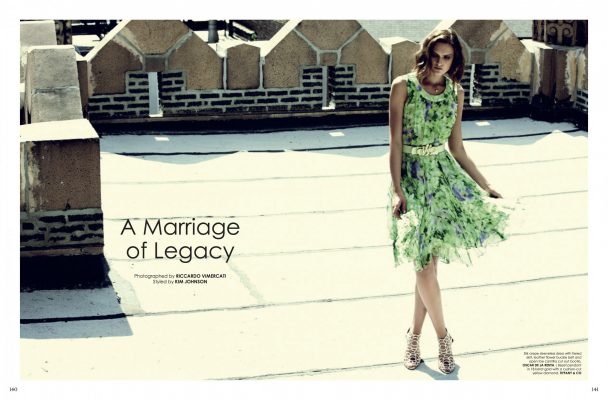 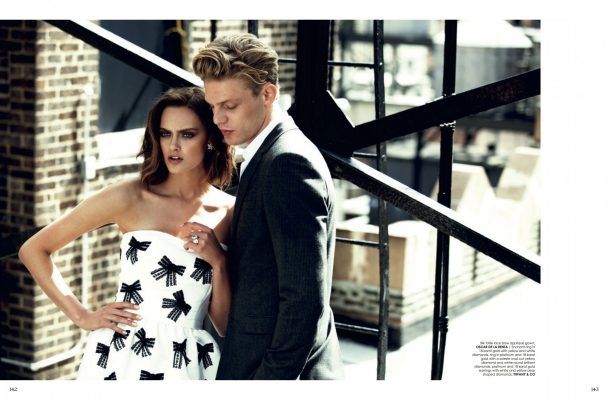 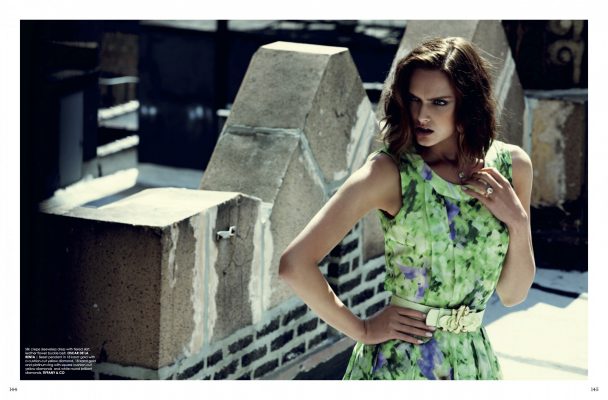 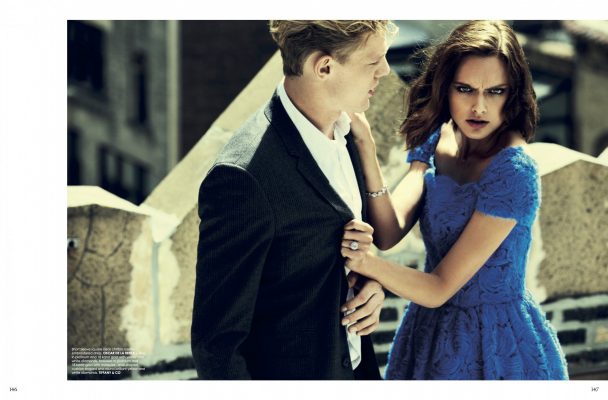 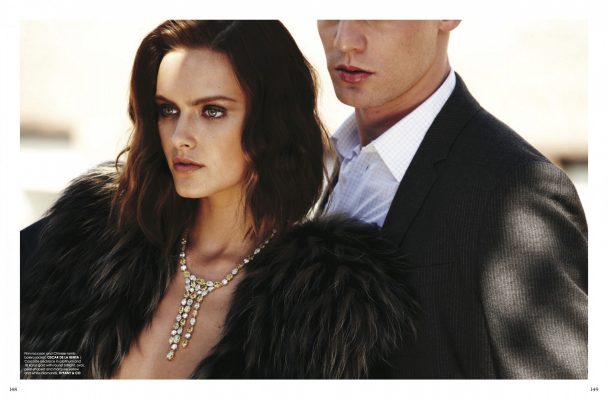 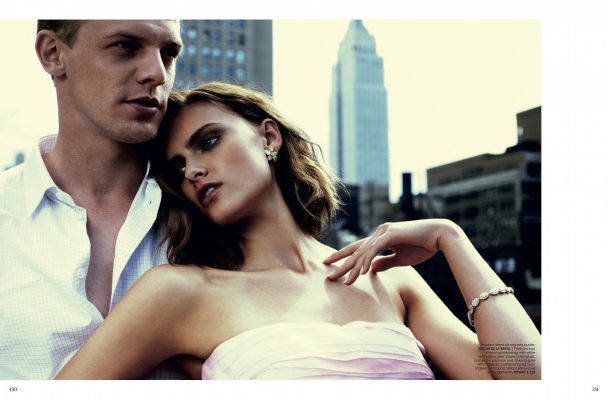 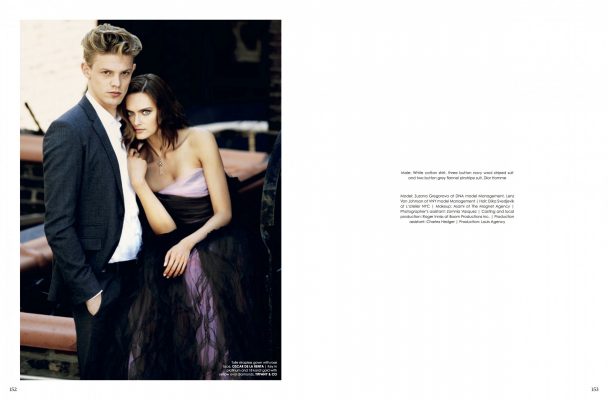 A Marriage of Legacy, MOJEH Issue 11, photographed by Riccardo Vimercati.

In 1969 De la Renta became an official citizen of America. As a fully-fledged New Yorker, De la Renta was given the opportunity to exemplify his couture mindset passed on by Balenciaga. ‘Working for Cristóbal Balenciaga was a tremendous learning experience for me. I observed how he constructed garments first hand,’ reminisced De la Renta. ‘Balenciaga was a great designer because he was like an architect. He used to say ‘you don’t have to have a body, I will make one for you.’ For a decade he showcased his skills designing haute couture for the iconic label Balmain, becoming the first American (and Dominican) to hold a major position at a French fashion house.

Unique to De la Renta was his ability to translate clothes intended for the catwalk onto prolific figures. Of his many feats, dressing the presidential first ladies from Betty Ford, Nancy Reagan, Hillary Clinton, Laura Bush to Michelle Obama, whose long standing avoidance towards his label finally caved a month before his death, embodied the power he possessed over the industry.

As a ready-to-wear designer for four decades, De la Renta began to diversify his label into bridal wear in 2006, producing iconic gowns for iconic women. One of his most recent and prolific creations appeared in the wedding of Academy Award winning actor George Clooney and human rights lawyer Amal Alamuddin in Venice, Italy. Alamuddin was swathed in 14 yards of appliqued Chantilly lace and ivory tulle, complete with hand-embroidered bodice. It was a gown fit for a princess, the epitome of Hollywood glamour.

Whatever the trend, wherever the season transported fashion, De la Renta’s designs were constructed magnificently, morphing the female form with an elegant ease and natural restraint. De la Renta took it upon himself to shape the modern woman’s view of couture, introducing a new relevance to a customer that was ever adapting and financially limitless. He commented that couture ‘was a craft that was made for the very few and the very privileged.’ He continued, ‘you are exercising your talent and fantasy without holding back, but there is still a consideration in mind.’ This thoughtful process was noticeable in his wildly successful collections at Balmain, a house now powerfully helmed by bright young thing, Olivier Rousteing. 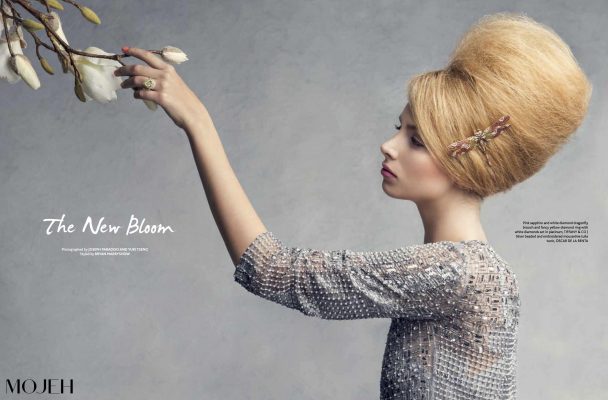 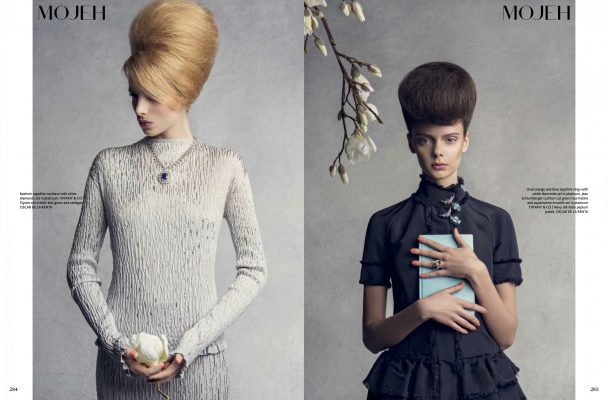 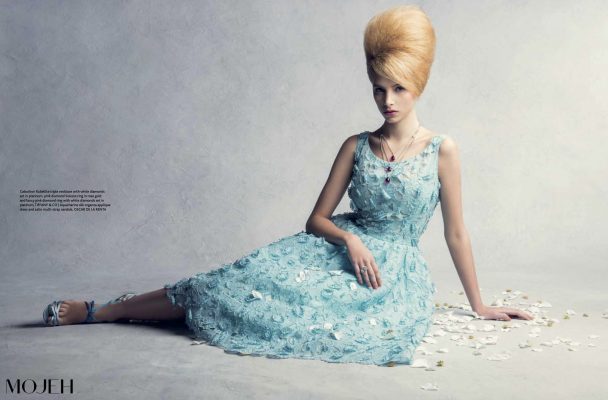 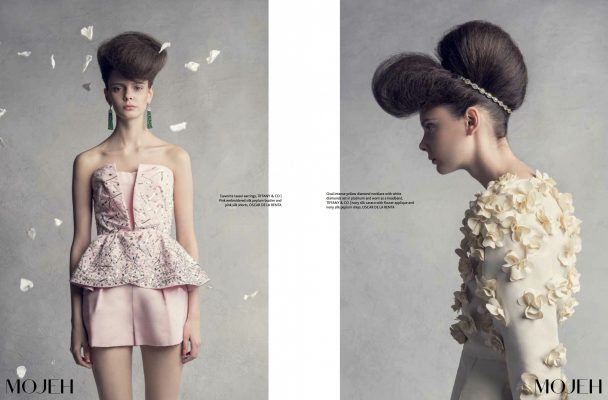 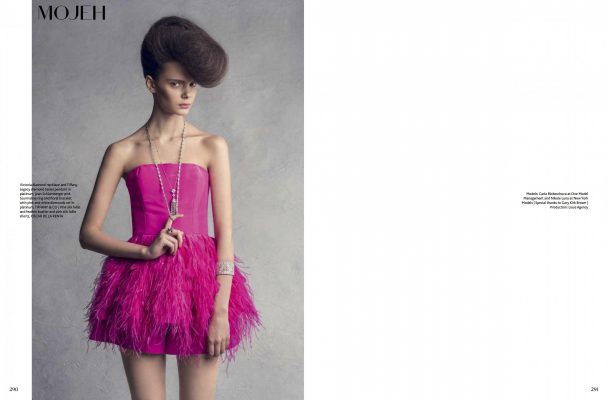 De la Renta was after all a strong advocate of new talent. From 1973 to 1988 he twice served as President of the CFDA. Over the span of his illustrious career he collected two American Fashion Critic’s Awards and was honoured with a CFDA Lifetime Achievement Award in 1990. His philanthropic efforts helped construct a school near his hometown in Punta Cana that lead to the Dominican Republic honouring him with the Order of Merit of Duarte, Sanchez and Mella as well as the Order of Christopher Columbus, praising De la Renta as a pioneer of his time.

De la Renta’s consideration of the modern woman catapulted his designs into the 21st Century; replacing women of political power for silver screen sirens, pop icons and fashion mavericks. ‘To see a celebrity or icon wearing a dress I have created, it is the highest compliment,’ noted De la Renta. His name became a firm fixture in the cult Sex and the City series, with Carrie Bradshaw (Sarah Jessica Parker) donning a spring/summer 2004 flute-skirted dress in a famous scene during the shows final season. Parker’s admiration for De la Renta saw his designs showcased to a wider, more considered fashion audience. Most notably at the ‘Charles James: Beyond Fashion’ Costume Institute Gala at the Metropolitan Museum of Art where Parker dressed in a monochrome black and white gown lovingly scrawled with the famous De la Renta signature.

From his extraordinary talent De la Renta understood the business of fashion and maintained the equilibrium of a brand so deeply rooted in American culture. The dialogue he shared with Galliano for his autumn/winter 2013 ready-to-wear collection marked half a decade of designing clothes in New York. The collection incorporated heritage pieces in jacquards and toile prints, built to a crescendo of two silk faille ball gowns emblazoned with gold bullion embroidery that closed the show. ‘I think my Spanish heritage has a tremendous influence on my designs. I come from a place where a sense of life and colour is very important. I like things to be beautiful and exceptional, full of colour. I try to design clothes that make a woman feel bold,’ said De la Renta of his design process. 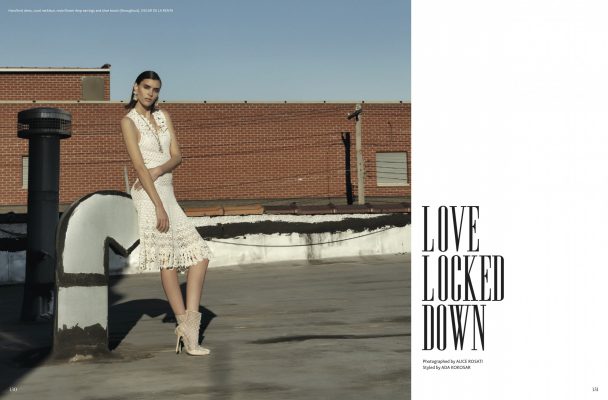 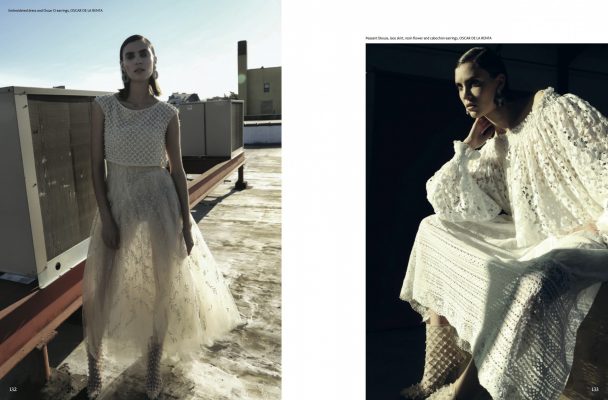 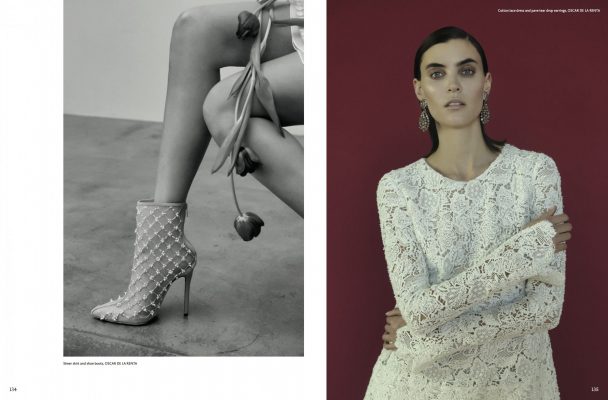 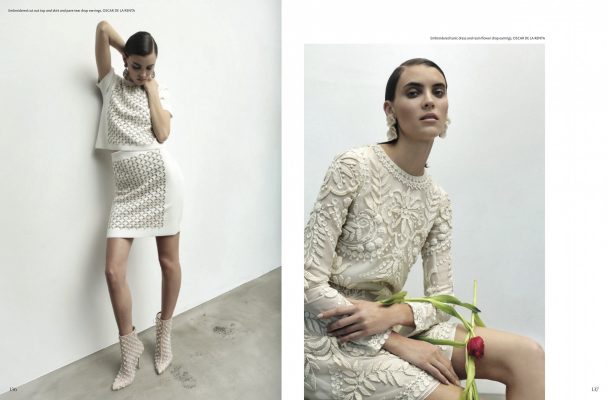 In the pages of MOJEH De la Renta’s designs shone for their incredible awareness of the female form. His creations, though heavily influenced by American aesthetics, exemplified the refined attitude of our readers. A concept De la Renta was well aware of. ‘I love the sensibility of the Middle Eastern woman. There is a sophistication in the culture that has existed for generations, they are incredibly elegant.’

Though few American labels have survived a designers passing, the Oscar De la Renta name intends to live on through British-born Peter Copping. His design aesthetic during a three-year tenure at Nina Ricci reflected the flashes of feminine brilliance associated with the Oscar De la Renta woman. As the new creative director for the brand, Copping will showcase his first collection in February under the lights of Park Avenue, hopefully with every intention of continuing the extraordinary legacy of New York’s sultan of suave.