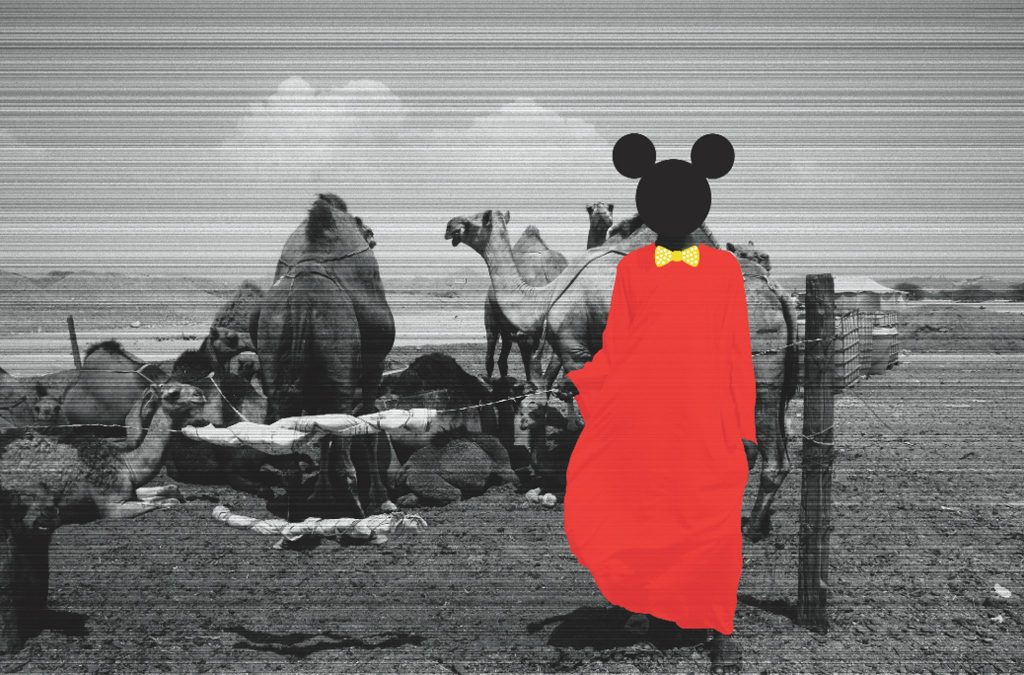 From cartoon to camouflage, artist Huda Beydoun mixes graphic appeal with social statement. We speak to the artist about her work, her inspirations and why her signature is a mouse.

It’s something we’ve seen before of course. From street art to satire, the Mickey and Minnie symbols are more loaded than a tour bus to Disneyland. In their use, Beydoun is imprinting her message, leaving little room for ambiguity and at the same time opening it up to layers of interpretation. Are they a wink at the ‘hidden Mickey’ phenomenon, disguising their subjects but doing so in plain view? A commentary on Saudi Arabia’s undocumented from a woman who keeps her ears to the ground on social issues?

‘I’ve been getting a lot of positive feedback regarding Documenting The Undocumented as I took a path that is new and different from my previous work,’ says Beydoun. ‘But the photo of a woman wearing a burqa with a Minnie Mouse silhouette did garner a little negative feedback from some, but I feel the people who criticized and felt offended really did not understand the concept behind the piece before expressing their opinion.’

Whether possessing understanding or not, critique and even controversy is part and parcel of the nature and the business of art, particularly if it’s done well. In many ways it is a testament to Beydoun’s creative process that her pieces can sometimes prove divisive. In stirring up opinion she’s evidencing her work as more than just banal decoration. As she says herself, ‘I believe artists should play an influential role in society by capitalizing on current issues and trends that are taking place where they live.’ 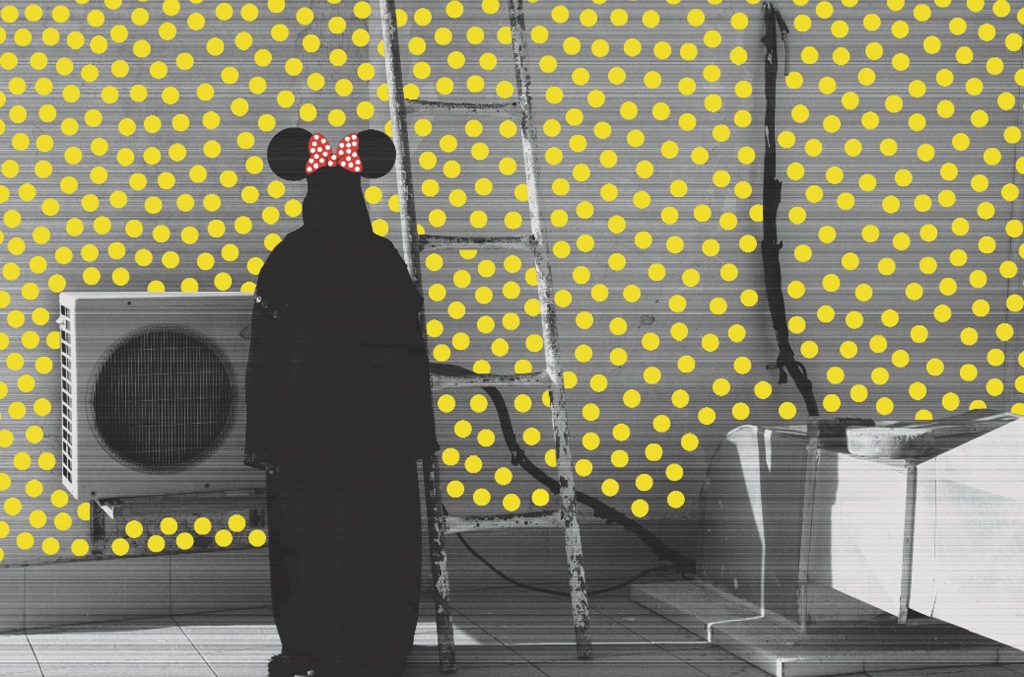 Born and raised in Jeddah, Beydoun’s roots in Saudi Arabia have blossomed into purposeful work. A country abundant in heritage that still exudes a certain enigma, at least from the outside, her homeland is a rich canvas on which to build her thoughts. By default she has found herself part of a school of art that continues to gather momentum. We look to the work trickling out of the Kingdom as a creative outlet that addresses regionally resonant issues, if not global ones. ‘Living in a country such as Saudi Arabia gave me the inspiration to speak out through my artwork,’ says Beydoun. ‘My artistic influences often stem from the world around me – the things that play with my mood and thoughts. I’m interested in the way people live their lives and their stories fascinate me.’

Selling her first painting at 18, Beydoun’s own story is one riddled with surprises. It’s hardly shocking that she studied graphic design and photography – her bold aesthetic forgoes the traditional calligraphic style we sometimes associate with Saudi Arabia, yet has Designer written all over it. More unexpected is her foray into the world of teaching. With a degree in Special Education (majoring in Autism Spectrum Disorders) Beydoun has previously worked as a behaviour therapist and an art teacher. It might seem something of a stretch to suggest it’s had an impact on her work and yet it’s a continuing source of inspiration. ‘Working with elementary students was a remarkable experience,’ she says, casting her mind back. ‘I’ve always been fascinated with how they view, and work with, art. It’s refreshing to see what they draw, almost an augmented reality that provides me with new sources of inspiration. It’s an artistic goldmine!’ Yet Beydoun’s intent is far from child’s play.

‘I would like to give back to the artistic community and explore a view which might not have been explored before, a new reflection,’ she explains. ‘I’ve dabbled with different mediums such as drawing, painting, mixed media and photography. Sometimes, depending on my experimentation with either one, they end up steering into a solid subject-motif.’ 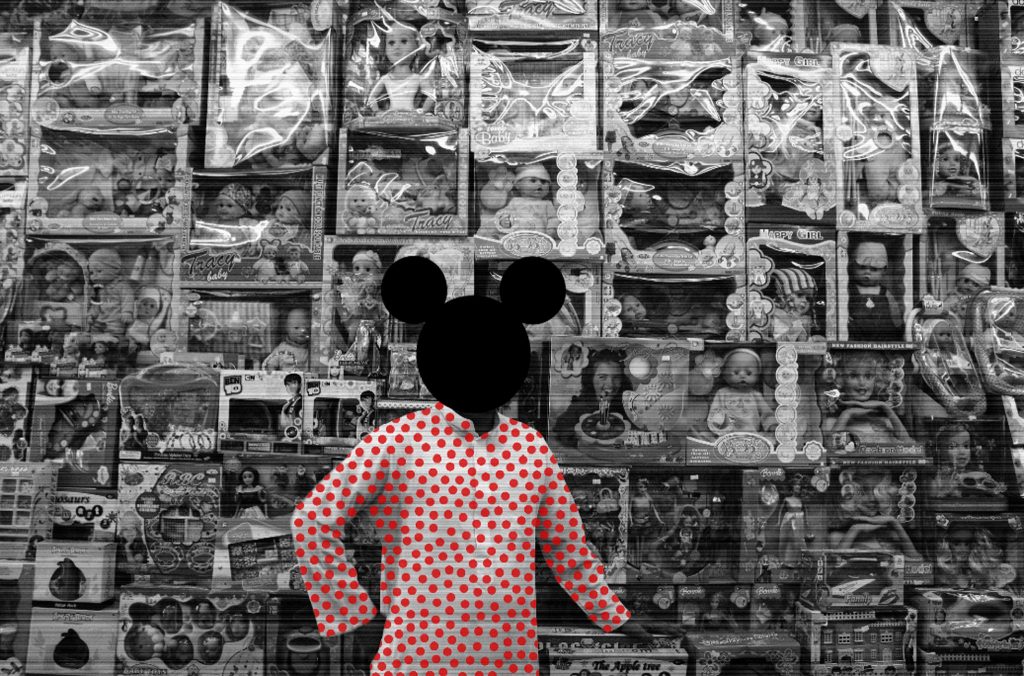 Her graphic style unquestionably lends itself to developing motifs that have, or will, become hallmarks of her work. A Mickey Mouse silhouette overlayed on a snapshot of Saudi life? ‘That’s a Huda Beydoun.’ But even with a splash of the fanciful, her manifesto doesn’t include funny. On whether it’s meaningful to bring a sense of the lighthearted to the art world – ‘I wouldn’t say it’s important.’

With Shadi Ghadirian and Mohammad Kheirkhah listed as some of her greatest inspirations (she describes them as ‘simple, inspirational and bold’), Beydoun and her reference points become clearer. We see parallels with Ghadirian’s use of iconography and her knack for adroitly layering symbolism upon symbolism. Kheirkhah’s ability to create a focal point manifests itself in Beydoun’s uncluttered compositions and her use of colour. From the naïve sketches of children to the work of eminent photographers who explore duality and contradiction, she devours and then produces them in her own inimitable style.

Just seven years since she sold her first work, Beydoun’s artistic trajectory is still uncertain but there’s an excitement about what comes next. With Documenting The Undocumented she has positioned herself as an artist with a decisive point of view, referential but not derivative. While she won’t be drawn on what she feels are the most pertinent issues of the day, it’s safe to say that she will continue to imbue her work with the topical and present us with pieces that are as much social allegory as personal perspective. Ultimately that’s her job. As she says herself – ‘an artist is someone who can bring ideas to life.’

There’s more to Huda Beydoun’s work than spots and ears. A first glance at this Saudi artist’s pieces raise a wry smile, but it quickly turns to a pensively furrowed brow. For an artist who plays with the whimsical, she’s not afraid to go deep. Beneath Mickey and Minnie, lie the intentionally faceless, the undocumented immigrants of her homeland. For most of us the simple graphic arches of these Disney staples symbolize an innate quaintness – in her own words they are ‘figures of joy and happiness’. It’s a potent contrast and one that nods to the subtle conventions of Saudi art and the addressing of issues from an oblique angle. ‘It’s an asymmetrical reflection of the interaction, or lack of, between some undocumented immigrants and I,’ she explains. ‘It was challenging to take their pictures during street life exploration in Jeddah since a lot of undocumented immigrants are being deported. Masking their faces with a Mickey or Minnie Mouse silhouette is a manner of hiding their true identity and an element that stamps most of my work.’