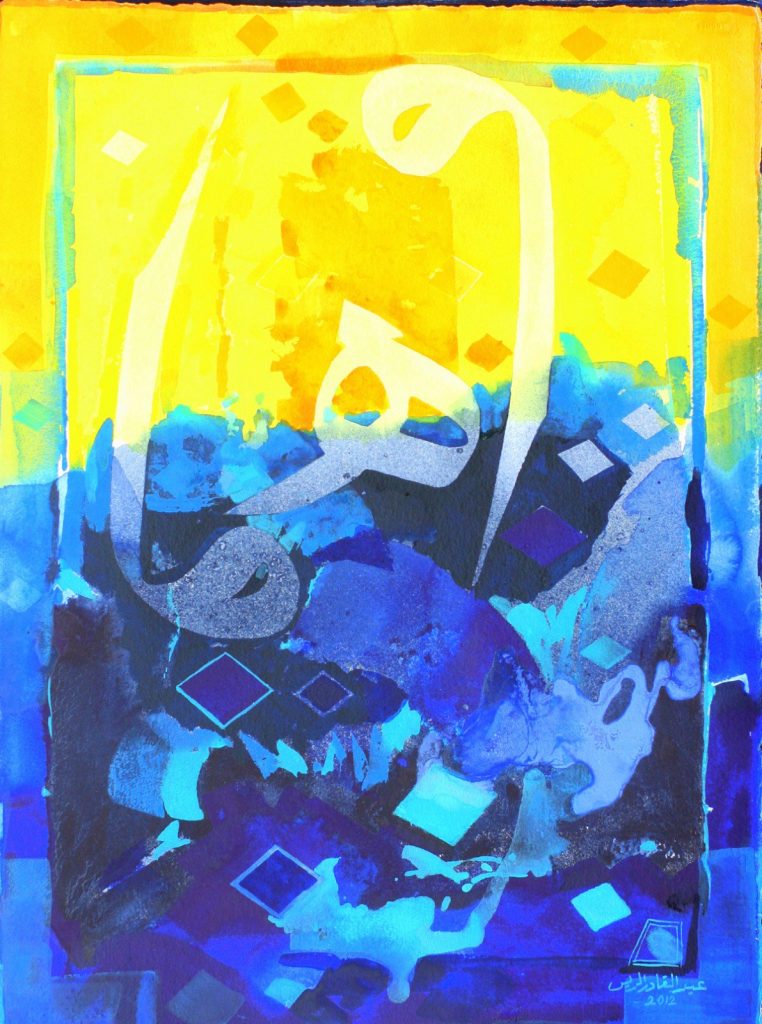 Abdul Qader Al Rais is arguably the UAE’s most renowned artist. We speak to him about his humble beginnings, his international success and why he need never look further than his homeland for inspiration.

Abdul Qader Al Rais is as Emirati as Kanduras and dates, so it was fitting that our first conversation unfolded in one of the region’s most iconic landmarks. A vast curved splinter of white, the Burj Al Arab sits proudly on the coast of this new metropolis, a symbol of Dubai’s sprint run from desert to desirable destination. But Al Rais was a fixture of the emirate when all that was in Jumeirah was sand and waves, and he’ll no doubt continue to be a fixture when the region is transformed yet again, putting on its best face for a curious world at Expo 2020.

‘In 1990 we had one gallery, now we have over 60,’ Al Rais reminisces, ‘the UAE has become one of the most important places for art in the Middle East.’ It’s a transformation that Al Rais has been able to witness firsthand but if you’re expecting gushing excitement you’ll be disappointed, for he is simply not the type. Dignified, understated but far from solemn, he chooses his words carefully and our conversation is punctuated with pregnant pauses as he muses before responding. During these moments of quiet there’s a tangible sense of gravitas. The few people who have joined us for the conversation sit captivated, with no clinking of teacups or rustling of paper. You can feel their respect and it’s hardly surprising. After all, Al Rais is frequently described as being the UAE’s most ‘important and highly celebrated artist’.

It’s a description he seems to accept begrudgingly, modestly diverting our line of questioning when we ask just how it feels to be so renowned. ‘Sometimes you get a gift from Allah,’ he says. ‘When I’m showing abroad they’ll always write ‘Emirati artist’ before my name. To have my country’s name before my own means that whatever I do I’m giving back, I’m giving back to my country.’ 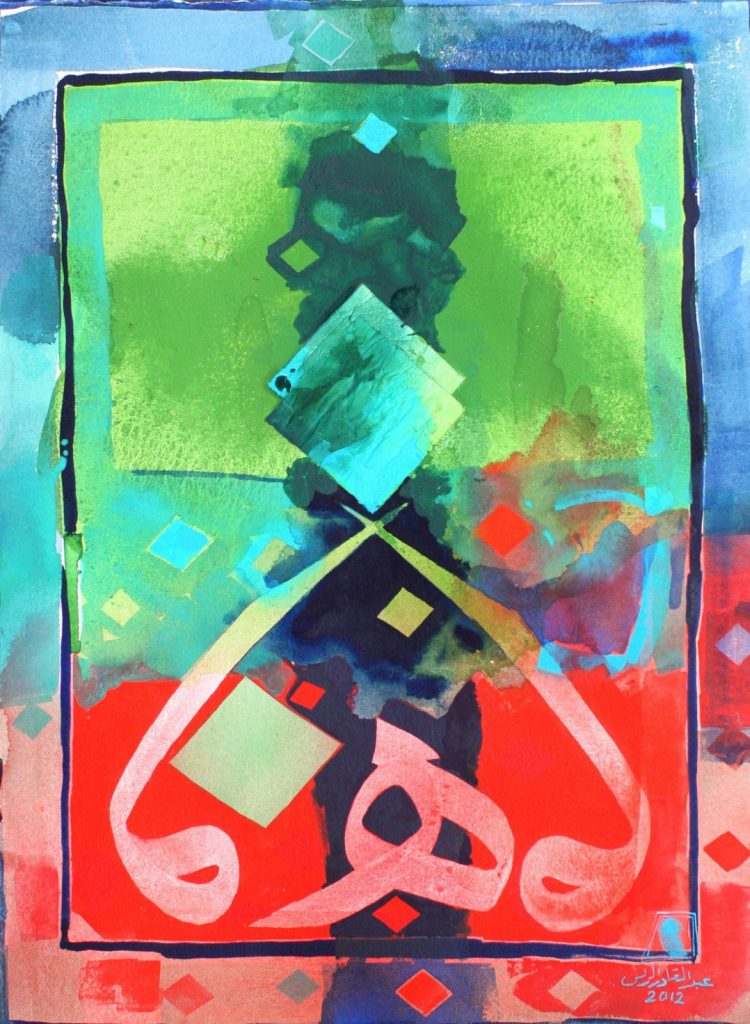 ‘I’ve got a lot of students who I’ve never met,’ he says, setting aside his humility for just a moment to acknowledge the impact he has had on the region’s emerging talent. ‘I admit there are those who might like my style and try to copy my work, especially in the Gulf region and also Iraq, Egypt and Lebanon. Some people admire my use of colours, some the calligraphy and some people are inspired by me being a self-taught artist. I only hope my example gives them the motivation to work in the field of art and, more importantly, continue working in the field of art.’

Al Rais will always be known as one of the forebears of this nation’s art scene. He describes himself as both ‘proud and fortunate’ to have been able to see his homeland flourish into the prosperous hub it is today – a place where creativity is celebrated and more and more people enter the art world with each new generation. Still, he doesn’t lose sight of his own aspirations. For a man like Abdul Qader Al Rais, what more could there be to wish for? ‘I just wish that the best of my work is yet to come.’

It was in the 1960s, when Al Rais was just a teenager, that his flair for painting began to manifest and by the mid 70s he was winning awards. Despite a career that has seen him collect trophies by the armful, it was this first gesture of recognition that still resonates the most. ‘If you get a prize for the first time it’s something special and you remember it for your whole life. The others are just repetition.’ Of course he’s quick to clarify with his usual, subtle congeniality, ‘but you have to appreciate any prize because, regardless, it’s always a special situation,’.

Sitting in a space surrounded by his work – lounging within the confines of an exhibit organized by Swiss Art Gate UAE – it’s apparent his work has a distinctive identity. His most recent pieces combine calligraphy with striking colour, applied with purposeful and confident strokes. They serve as an abstract representation of the region in which we live. The colours are emotively exaggerated; the azure waters of the Persian Gulf rendered in vibrant cyan and deep navy, the dusty tan of the sand in blazing orange and yellow. His classic work is more literal. Wind towers dominate canvasses, shadows pour through Arabic trestles and watercolour fishing boats painted in the early 90s sit against desert horizons devoid of skyscrapers. 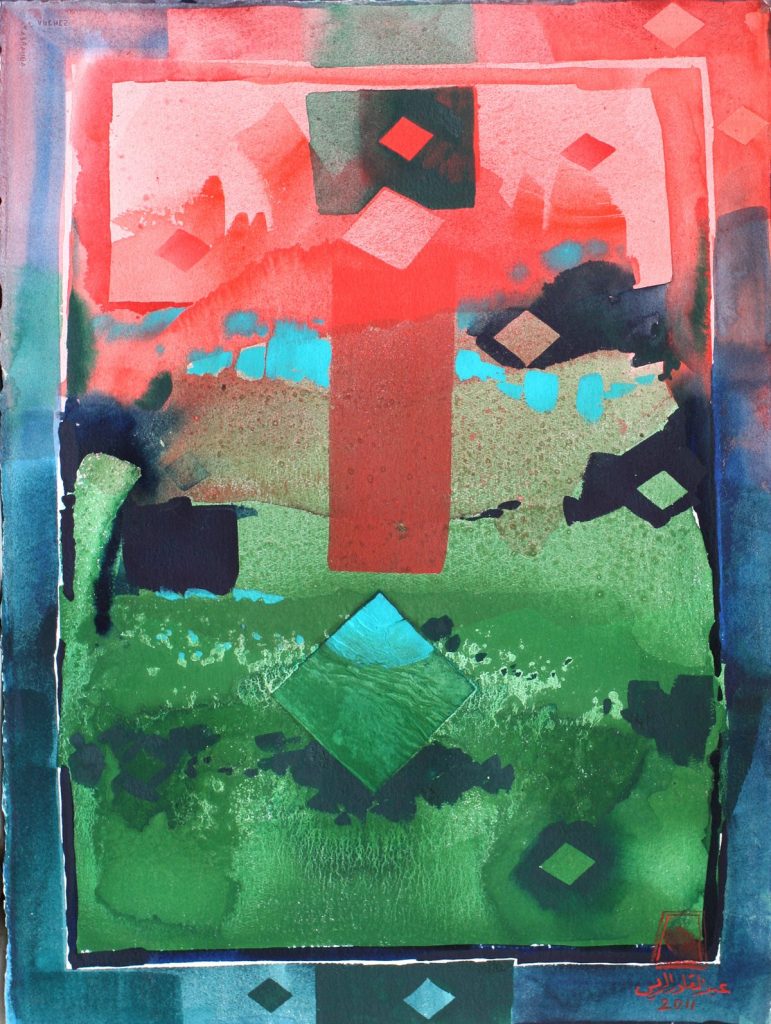 As we see the region evolve in his paintings we better understand that Al Rais is an artist who has found his footing and success through experience, over time. ‘I was perhaps the first in this part of the world to use colours and materials the way I do,’ he tells us. ‘It helped me look like a pioneer. I’ve been through phases of trying realistic work, of impressionism and of expressionism. If you look back to the 60s there was no one talking about art here. There was maybe one small shop where you could buy paint for interiors. When my father passed away in the late 50s, I went to Kuwait where my sister lived with her husband, and I got the paint and materials for free! When I came back to the UAE I continued and so you could say that the art here started with me. It also means I’ve had decades to explore my craft.’

Whilst the respect Al Rais engenders in others is obvious, so too is the respect he personally has for art. His process has been meticulous, the time spent on a single painting or project, and  his journey from beginner to celebrated veteran. ‘I call it the ‘right way’ in art. I started with the masters, who I loved, people like Raphael, Rembrandt and Monet. I studied them. I emulated them. In the beginning, people rush to the abstract but I don’t believe they’ll be able to continue or do good work, because the foundation isn’t right. I used to work for the government in an office, and when I had free time I would draw or paint. I felt in my heart that art and the action of painting was stronger than sitting and working in an office and so as soon as I could support myself with my work, I left. I’m a self-taught artist but I still believe you have to start from the bottom and get the foundations right.’

For all of his reticence and modesty, Al Rais’ approach has afforded him credibility and admiration from a global audience. He’s not just an ‘Emirati artist’, he is an artist showcased on worldwide stages. His work hangs in the British Museum alongside names that even an art novice would recognize.