With the global pandemic far from over, people are increasingly taking the holistic route to help tune out stress and anxiety, and music therapy in particular is leading the charge

Even before Coronavirus hit in early 2020, the Middle East was in the midst of a mental-health epidemic. According to a global study conducted in 2018, the Middle East suffers from the highest rate of depression and mental health disorders in the world, and with anxiety steadily on the rise since Covid-19 became the most overused phrase in our vocabulary, many people are now turning to alternative and more holistic therapies to help drown out the external noise, soothe frazzled nerves and focus on being more present.

Take streaming services, for example. Once the preserve of playlists for going to the gym or getting ready for a night out, Spotify now has several sleep-related playlists including ‘Deep Sleep’ (which has been downloaded over a million times) and ‘Sleepify‘, while YouTube has numerous ambient songs and playlists that can be accessed for free. This includes Weightless by Marconi Union, which after being tested by neuroscientists in the UK was found to reduce anxiety by 65 percent and reduce physiological resting rates by 35 percent. Created in collaboration with sound therapists, the song’s rhythm, melody and harmonies were all constructed specifically to help slow down the listener’s resting heart rate, reduce blood pressure and decrease the amount of the stress hormone cortisol being produced by the body. Pretty impressive – and intriguing – we think you’ll agree.

Closer to home, streaming platform Deezer has launched its new original podcast, Sleep Tight, to help alleviate insomnia. Featuring a collection of fairytales, it aims to help listeners unwind and prepare for a good night’s sleep by taking them on a journey that oscillates between the worlds of fiction and reality, engaging the listener enough to be listening yet not requiring enough concentration to keep them awake. “Sleep Tight was our first foray into wellness,” says Mark Abou Jaoude, head of content, artist marketing and label relations for Deezer, of the decision to launch the podcast. “At Deezer, we believe there’s a need for content that ultimately helps our users. In the near future, we plan to produce more of this type of content in both the podcast and music spheres.”

And even the music industry is taking more of an introspective approach, with more DJs, being unable to perform on the usual club circuit, shifting their focus towards more ambient music to reach their fans in a new way. In August 2020, Grammy Award-winning American DJ and producer Diplo teamed up with meditation app Calm to release his first ever ambient album, MMXX. In fact, over the past 12 months, the app best known for its celebrity-narrated ‘Sleep Stories’ has been adding to the Calm Music stable of artists, and now includes playlists by Sam Smith, Kygo and 5 Seconds of Summer.

But can music therapy – the clinical and evidence-based use of sound-centred meditation within a therapeutic relationship – really help treat depression or replace traditional talking therapy? One area of music therapy that has been gaining traction in recent years is binaural beats – a process that involves playing two tones of slightly different frequencies, with one in each ear. Widely acknowledged as a therapeutic stress reliever, binaural beats can also be used to increase focus and concentration, and aid in the treatment of depression and other mental health disorders such as anxiety. US-based Karen Newell, co-founder of Sacred Acoustics, is a specialist in personal growth and development, and her programmes, workshops and guided meditations have even been given the Goop golden seal of alternative therapy approval. Speaking to MOJEH, Karen explains that she discovered binaural beats through her own personal explorations to get into a deeper meditative state of awareness. “We’re so used to thinking and analysing and doing and being so active and to just take a moment to calm ourselves can be so challenging,” she explains. “And I found that these kinds of binaural beats sounds really helped to calm the mind and to help me get into those meditative states more easily.” 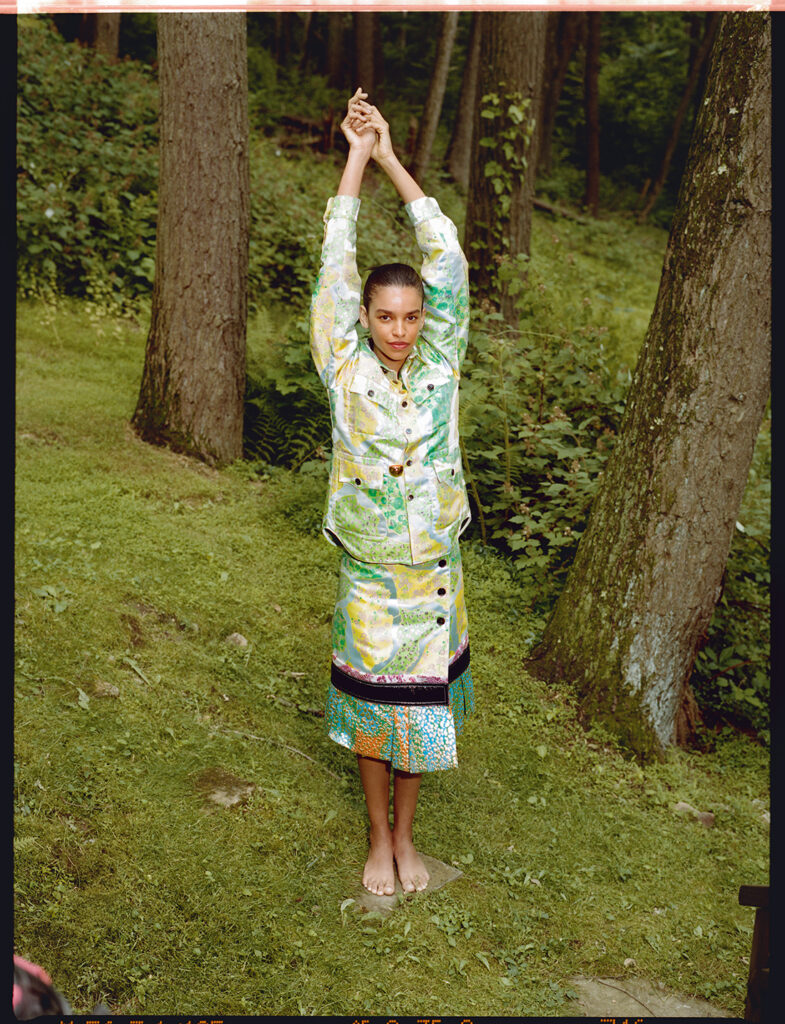 Newell, along with Sacred Acoustics co-founder and composer Kevin Kossi, recently completed a pilot study with a psychiatrist in New York City where binaural beats were prescribed to patients suffering from anxiety. After just two weeks of listening, patients showed a 26 percent reduction in anxiety, in particular those who have trait anxiety (someone who is anxious all the time, as opposed to someone who has state anxiety, which is situational). “Meditation in general has been shown to reduce stress and anxiety, and binaural beats seem to, for some at least, give an extra boost to that support. Especially when you’re in a very stressful, anxiety-ridden kind of situation it can be very challenging to just say ‘Let me get calm’,” Karen adds. “It’s really helping people who have that quality of anxiety in their system and bring it down to a calmer level.”

And while other kinds of meditative musical therapies require the person involved to go into a session with an open mind for optimum results, binaural beats can also work as a therapeutic tool in what Karen describes as “a crisis moment” when “they’re not thinking about their belief systems.” However, she does attest that those who approach binaural beats with an open mind and open attitude will get potentially greater results, especially those who currently find themselves at home, unable to carry out their usual activities due to the pandemic, and are looking for alternative ways to reduce their anxiety. “It’s an opportunity. So many people think of it as a hardship and so often hardships are opportunities, be it for personal growth, for spiritual growth, for community, and societal evolution. It’s causing us individually to look within, and I think it’s also causing us collectively as a society to reevaluate some of our policies of how we take care of people,” she adds.

That sentiment is echoed by sound therapist Marko Zigon, founder of Sonic Temple, Dubai. “It has certainly created an additional state of fear throughout humanity,” he says of the pandemic. “The good side effect is that many individuals finally have a chance to take a break and start questioning a lot of aspects of life. Perhaps some for the first time ask themselves: Am I living a purpose-driven life? Do I feel fulfilled? Happy? Do I want to change habits that don’t serve me well? This existential self-inquiry can be an excellent start to more conscious life. And sound, being a universal and omnipresent force has all the required potentials in establishing a new way of living.” A classically trained musician, Zigon had been working as a producer, musician and sound engineer for almost nine years before an experience with sound therapy changed the course of his career. He has worked in the UK, Germany, USA, Nepal, Bahrain, Hong Kong and Japan and is internationally certified in the use of tuning forks, Himalayan singing bowls and gongs, but uses over 300 sonic tools, including crystal bowls and shamanic drums as well as sound massage and voice release with his clients. “After playing drums for several years, I came across sound therapy in 2006 while doing my diploma thesis on noise reduction as part of my mechanical engineering bachelor’s degree. At that time, I encountered tuning forks in a scientific fashion and then started learning more about other ways these and other tools are being used,” he shares.

Describing sound therapy as a “modality of energy transmission,” Marko says the induction of vibration can be used to invoke a biochemical response in the body, and while he’s loathe to link sound therapy with achieving an ultimate goal (he believes it creates a “barrier” and “mind resistance”), his sessions aim to entrain the brain, regulate the heart rate and stimulate the nervous system. “Therapy itself means something that is done consistently and/or over a period of time. One session only can certainly have a very beneficial effect – and it’s usually groundbreaking – however, to let go of physical pain or traumatic experiences, more sessions are needed, as we need to monitor what we are doing,” he clarifies.

For Joanne Smallwood, a yoga teacher and sound healer based in Dubai, a sound therapy session while on holiday in Bali was the catalyst for her own journey of discovery with music therapy. “I went to a session and I was blown away. For the entire hour I was anchored into a deeply relaxed state. When the session was over, I went up to the instructor to ask a question and when I opened my mouth nothing came out. I was so relaxed I couldn’t even speak. In that moment I knew that I had to learn more and study this incredibly powerful healing tool,” she reveals. Using Tibetan singing bowls and a spirit drum to lead her meditations with groups and private one-on- one clients, Smallwood believes that because sound meditation takes the pressure off ‘letting go’, participants are able to get into a deep relaxed state without complicating how they get there. She’s seen a huge increase in people turning to sound healing since the pandemic hit. “Participating in sound mediation will help to reduce stress in the moment. If you make it a regular habit, the effects will be compounded. It will boost immune function by reducing the hormone cortisol; heart rate and blood pressure are lowered, sleep quality is improved and so is overall mood,” she adds. “These are the effects of spending time in the parasympathetic state, or the ‘relaxation response’. This is the state where we are supposed to be spending the majority of our time. Due to stressful and overloaded lives, compounded by the current world situation, we are spending too much time in the stress response. Rest is important for our bodies to function at optimal levels.” That sounds like music to our ears.

Read Next: From Nature To Dancing, Here’s How Active Therapy Can Help You Navigate The New Normal