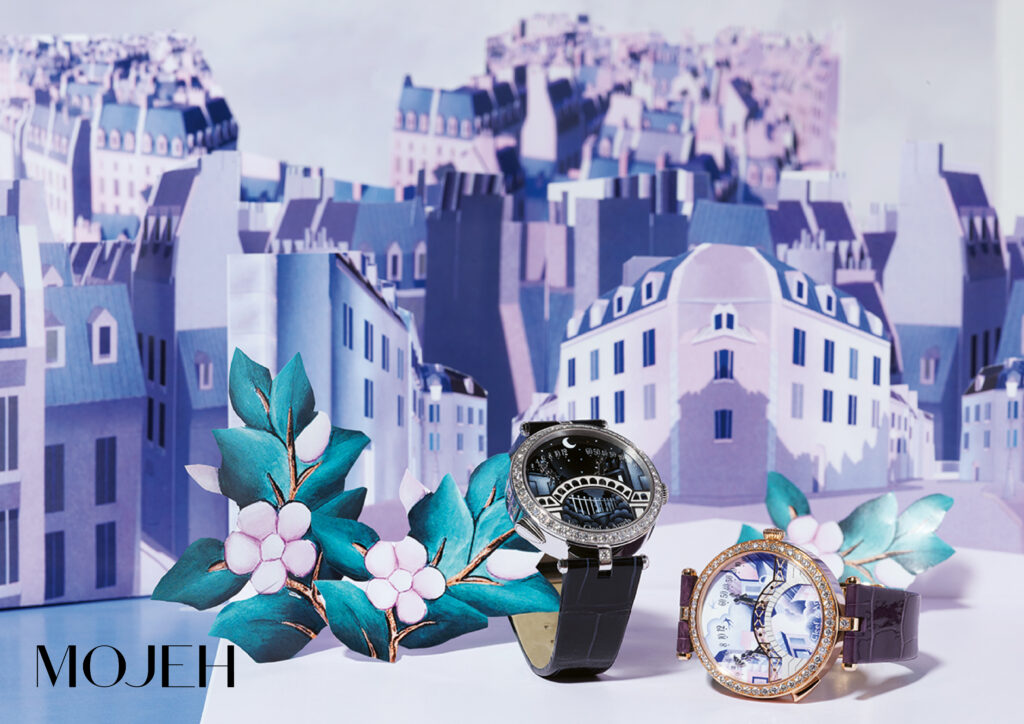 Since its inception in 1906 in Place Vendôme, the Maison of Van Cleef & Arpels has used love as its constant muse. Its collections have celebrated a myriad of great romances, and have been gifted between such renowned lovers as Grace Kelly and Prince Rainier of Monaco and the Duke and Duchess of Windsor, and at a time when we couldn’t be more in need of a good love story, the Parisian Maison has welcomed back its young lovers from the recognisable Lady Arpels Pont des Amoureux timepiece, while also celebrating Shakespeare’s tragic young romantics Romeo and Juliet in its current high jewellery collection.

“This year we are celebrating love stories,” announces Nicolas Bos, the charismatic president and CEO of Van Cleef & Arpels, as we settle into our interview at the L’Ecole Van Cleef & Arpels on Place Vendôme in Paris. It’s a cold and wet October day, and a couple of hundred of the world’s media have flown into town especially to witness the unveiling of this new collection of Lady Arpels Pont des Amoureux timepieces, part of its Poetic Complications collection, a decade after its first iteration was revealed. Now an iconic piece for the House, the last 10 years has allowed time for some reflection, innovation and constructive client feedback resulting in the birth of seven new designs, including a men’s version, that Nicolas hopes will demonstrate Van Cleef & Arpels’ vision of time associated with jewellery and romance. 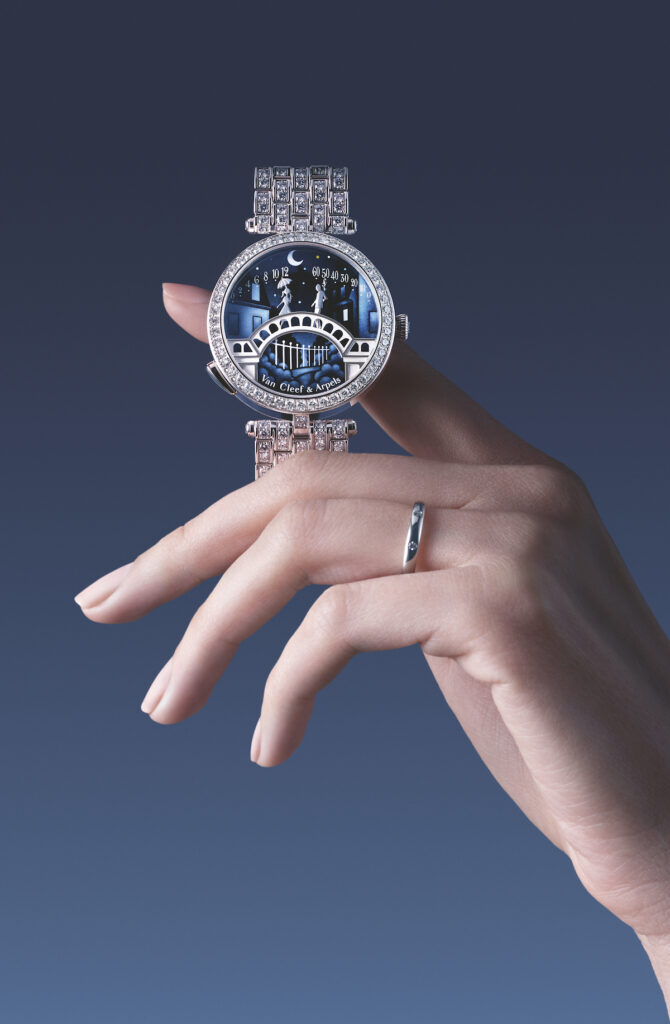 “A decade ago now, we launched these pieces that were inspired by the vision of Paris at night and the romantic story of two lovers and a bridge,” shares Nicolas. “I wanted to introduce some day versions, lighter in colour, a more pastel colouration, pink and gold, but keeping the same story of two lovers on the bridge, and so we also developed some more backgrounds of the four different seasons of Paris that are more jewelled versions. The pieces are about the passing of time through the succession of the seasons, day and night, the reserve of nature and, of course, of romance and love that we wanted to express.”

The four seasons Nicolas refers to on the Pont Des Amoureux are beautifully illustrated on the dials in coloured grisaille enamel which are individually hand-painted by expert artisans using a 16th century technique, at the Van Cleef & Arpels Campus Genevois de Haute Horlogerie in Geneva. On each dial the scenery changes: winter brings with it the arrival of snowflakes and the subtle addition of a top hat for the gentleman, and heavier coat for the lady, in contrast to spring and summer when the blossom comes out, the lady embraces a shorter hemline, and the gentleman removes his hat.

The night version, the closest to the original, sees a bright crescent moon and gold flakes representing stars, and during the daytime a pair of swallows swoop through the mauve-blue sky. Each dial is a tiny work of art that takes around 30 to 40 hours to complete, and demonstrates how important keeping traditional techniques alive is to Van Cleef & Arpels. Indicating the hours (the lady) and the minutes (the gentleman) the couple meet on top of the bridge – carved in gold – twice a day, at noon and midnight, where they kiss before returning to their original position. The same idea as in the original timepiece of a decade ago, but now with the development of a new movement.

“We noticed that a lot of the owners want to play with it and show how it works and turn it around, so we have developed on-demand mechanism so you can animate the story without affecting the time-keeping,” explains Nicolas, demonstrating how the couple can kiss “on-demand” with the simple press of a push button, so clients can show-off the playfulness of the narrative. “It works pretty simply so you can adjust the time, and then with the small push button set the two characters in motion and then they come back to the original position,” he says proudly. 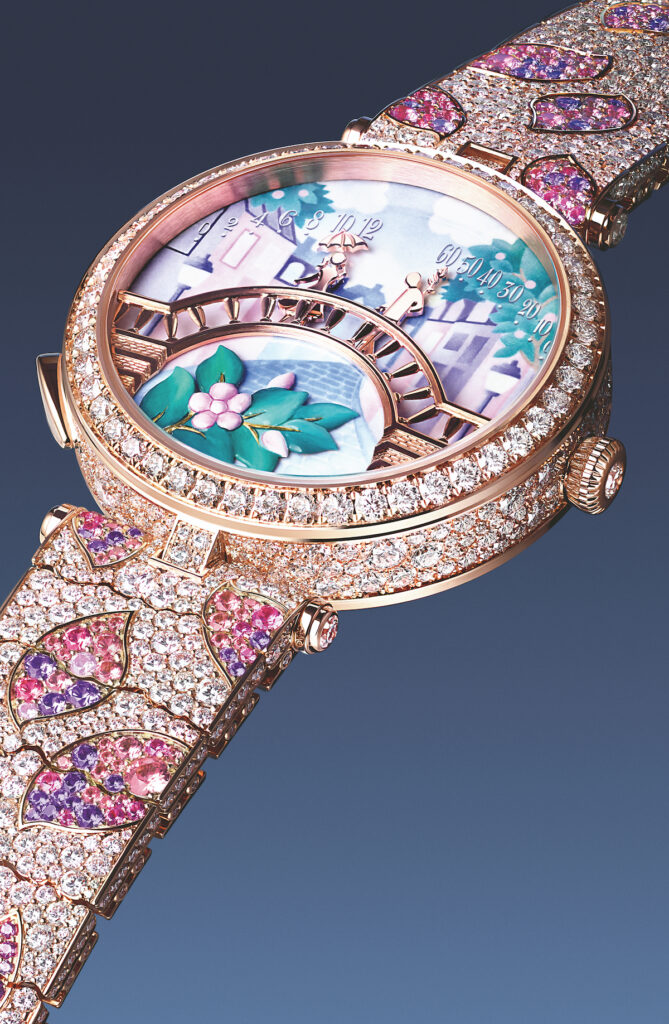 “It disassociates from the timekeeping so it keeps its accuracy, and you can do that as much as you like. It also has its own source of energy, mechanical energy, which comes from the push button that enables the movement without taking from the power reserve for the timekeeping.” Though Nicolas calls these “tiny, tiny” changes, they took around four years to develop. Joining the day and night, and four seasons, the House has unexpectedly launched a men’s version of the Pont Des Amoureux in 42mm following some conversations with clients. “We had requests and special orders over the years… we thought it was more a feminine story, but it looks quite good in the men’s watch, a very romantic watch of course, but it is kind of a nice combination,” says Nicolas.

So who wears the Pont Des Amoureux? “Clients are from all origins, all geographies and characters, some are very loud, some not so. There is no type. We try to create what we think makes sense within the House that is new, exciting, elegant… and then we see what happens,” he smiles. “Every time we think that it’s going to be for that type of person, that type of age group, we are always completely wrong.”

Overall, he says the Van Cleef & Arpels customers all have an appreciation for craftsmanship, detail and narrative in common and that the House, he thinks, manages to reach all sorts of characters and demographics through this artistic appreciation. “It may well be that a handful of people are lucky and wealthy enough to be able to afford these pieces. We don’t want to talk only to these people. We think this is very important,” he says. “We think these stories are universal, meaning that we think they have an artistic dimension and so they can be appreciated even when they are disconnected from the commercial aspect.”

The savoir faire of these timepieces is undeniably remarkable, so anyone with an interest in beautiful things will no doubt find them fascinating, and much like great paintings, photographs cannot do them justice. In person, the pieces are stunning, the movement bringing the narrative of the lovers to life to be played out every hour within their own tiny universe, so beautifully illustrated it really has to be seen to be believed.

How Hublot Mastered The Art Of Celebrity Collaborations