Cartier’s graphic Pasha watch has been considered a design classic since it first appeared, and now for 2020 it’s had a sleek makeover.

The Pasha de Cartier is, as the story goes, named for the Pasha of Marrakesh, who commissioned the timepiece from the French brand in 1943. He wanted something waterproof that could stand up to his penchant for active sport. Forty-two years later, in 1985, a watch paying tribute to that timepiece, brought to life by Gérald Genta (the legendary watch designer behind the iconic Audemars Piguet Royal Oak and the Patek Philippe Nautilus), hit the market. A big, round watch featuring four Arabic numerals and a large bezel, it oozed solid-gold charm but with a sporty edge and was a total departure from traditional Cartier, but at the same time, completely emblematic of the brand. It was an instant hit with fans, who liked both its scale – 38mm was big for Cartier – and its unusually good looks. These early models are easily identified by the date window at four o’clock with a lack of cyclops. Early production was extremely limited, and the Pasha was sold exclusively in Cartier boutiques. The watch also came with a distinct chain-linked cap with Cartier’s traditional sapphire on top, which covered up the actual screwdown crown that gave the case its water resistance. 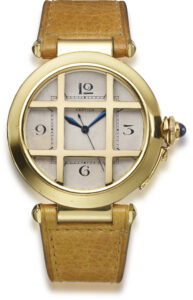 The original Pasha watch, launched in 1943

“Cartier has made iconic shapes its signature, and Pasha is definitely an original and audacious watch shape with its bold, round, twisted design, becoming a reference of Cartier style since its creation in 1985,” said the French Maison’s image, heritage, and style director Pierre Rainero in describing the magic behind reinterpreting long-lasting designs while staying true to the codes of the storied Maison. Originating in the archives and dating back to 1943, with its powerful lines, grid, Arabic numerals, crown cover and clous carré (square-ended fastening pins), it became the inspiration for the Pasha watch over 40 years later. “This is defined by many things; its size and proportions, which were unusual for the time, represented a self-assertion and an assumed freedom of taste. The obvious Cartier interpretation of the round shape that connects to the straight line of its profile, to the square of the fasteners and to the centre of the dial,” says Rainero of its cult status. “The protective crown of the watch winder, which is inherited from the first model from 1943, ensured the water resistance, a crucial point of the watch, which has now evolved into a graphic signature of the Maison and declares itself part of the Cartier watchmaking heritage.”

Rainero elaborates on the very Cartier nature of watch design that transcends time. “It is thanks to the original drawing of the four Arabic numerals, rhythmically distributed by the presence of the central square, that the Pasha watch has every element of a strong Cartier design. It’s singular, it belongs to the history of shapes and is emblematic of the Cartier style. It’s a landmark in the history of watchmaking.” It wasn’t long until Cartier started using the timepiece as a platform for various complications, with the Pasha soon welcoming an abundance of new versions, materials, and complications. The Pasha C was the first to introduce steel, in 1995, while the precious and officially feminine Pasha 32 came in 1998. The Pasha 42 boasted greater dimensions in 2005, and was followed by the Miss Pasha in 2009. Becoming one of Cartier’s most varied and beloved collections, the GMT, chronograph, perpetual calendar and golf complications were particular standouts. 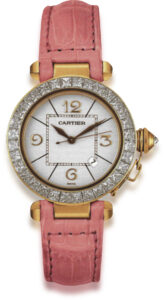 Takes on the Pasha proliferated for 25 years, with it seen in a wide variety of incarnations until it slipped from production in 2010. “Reworking an icon is the most demanding exercise, creatively. Famous among all, the Pasha is, by its unique aesthetic language, a horological exception among round watches. It therefore deserved a tailor-made creation process,” explains Rainero. “Rather than working on it as a whole, the Cartier watchmaking creative studio directed by Marie-Laure Cérède, chose instead to start by isolating each of its aesthetic codes to work on them separately and sublimate them.” It is thanks to these thoughtful updates that this year the Pasha returns in a model that is very close to the 1985 iteration in some respects, and different in others.

While technically designed for men, women in particular took to the Pasha de Cartier as a fashion statement, something Cartier certainly seems to be drawing on in its advertising for the 2020 re-release. This trend among the fashionable and famous quickly secured the Pasha its status as a modern design icon. “Pasha used to be a men’s watch, but it was then quickly borrowed by women for the symbol of power and achievement that it represents,” comments Rainero. “In 2020, the new Pasha collection is mixed-gender, that could suit both men and women, with two sizes, 35mm and 41mm. In the campaign, it is embodied by a new generation of achievers, men and women. With its strong design, Pasha can be attractive for many different types of clientele, especially new generations.” 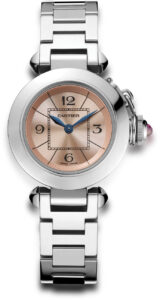 The revamped timepiece is sleeker and more streamlined, yet keeps its original proportions and codes, with no markings on the bezel but is still entirely recognisable as a Pasha watch. The fundamentals of the Pasha de Cartier are still present here, with the round case, now with a sleek polished bezel and more angular shapes, attached to lug modules with two Clou de Paris at their extremities. In the same vein, the crown is still protected by a chained cap that unscrews and reveals the winding crown, both elements being topped by a sapphire cabochon. However, all the elements have been modernised and are now sharper, better defined and less flamboyant, thanks to brushed surfaces. Also, the case is 100m water-resistant, giving this watch sportier capability than a Tank or a Santos.

Reviving the highlights of the 1980s design while adding some contemporary flair, Rainero shares what prompted the reawakening of this memorable timepiece. “Pasha is a Cartier signature, with a strong awareness among historical core clientele who were expecting a comeback. Following the relaunches of iconic shaped watches such as Panthère de Cartier, Santos de Cartier and Baignoire, it is now the perfect time to relaunch an iconic and distinctive round shape.” Just like the revamped Santos de Cartier unveiled in 2018, multiple options and clever systems for the straps and bracelets have been added, including the QuickSwitch system to easily swap straps, and the SmartLink size adjustment system to adjust the bracelet without tools. Each iteration of the timepiece will show off the Cartier Manufacture 1847 MC self-winding caliber, which provides 40 hours of power reserve, and the classic chained crown, now paired with a winding crown. 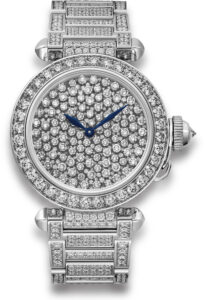 While the design, notable for its round case and elegant face and numerals, remains true to its original, subtle updates help to usher the Pasha into a new era. “Bringing relevance and modernity to our icons is an objective and is a very demanding creative process,” explains Rainero, regarding Cartier’s philosophy when it comes to re-releases. “Our mission is to create strong designs that stand the test of time and bear the capacity to evolve while remaining faithful to the original.” Bringing back a status symbol of the ’80s, the 2020 version of the Pasha will continue the original model’s legacy, appealing to a new generation of wearers who value self-expression, collaboration, diversity, open-mindedness and positivity. “Today, Pasha is back as the rallying symbol of a new generation of achievers,” concludes Rainero. “A new generation valuing self-expression, collaboration, diversity, open-mindedness and positivity as the main driving forces of achievement.”